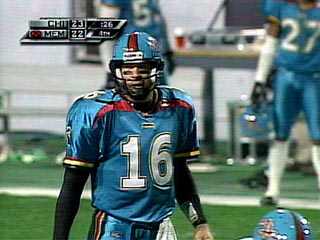 The team made its XFL debut on legendary Liberty Bowl, and enjoyed favorable fan support. However, a quarterback carousel soon bogged the team down until Jim Druckenmiller emerged as the leader. The other main detractor to the team's success was the problem with turnovers; for a time, running back Rashaan Salaam led the league in lost fumbles. The team was not even able to score a single touchdown during their first two games. But, as the Los Angeles Xtreme found out, the Maniax could never be counted out, as the Maniax swept the Xtreme during both regular season meetings.

The name of the team drew fire from mental health advocates, who claimed that the logos and name unfairly portrayed all people with mental health challenges as "ax murderers" and dangers to society. The team and the league refused to give in, and kept the logos and name unchanged. It will never be known if in future seasons the league might have reconsidered the logo, but it appears unlikely.

Perhaps one of the most memorable games of the entire season was the first game against the Xtreme in Los Angeles during Week 4. The field as soaked by a determined rainstorm, and the rain kept up for the entire game. The playing field was covered in a solid pool of water and the ball was too slippery for some players throughout the contest.

The Maniax made a last-season surge in a long-shot bid for a playoff berth, but in spite of finishing at 5-5, they were unable to overcome a points deficit, and lost out to the San Francisco Demons. In spite of numerous mistakes, the Maniax were a fun team to watch and played mostly exciting games.

The plural of maniac is the root of this team name - an intimidating characteristic of any opponent, but even more so of a whole team. The maniacal eyes of the team mascot is just a preview of how the MANIAX opponents will feel after they've been AX'ed.