“This is what I want to do. I want to be a dad and play football.” 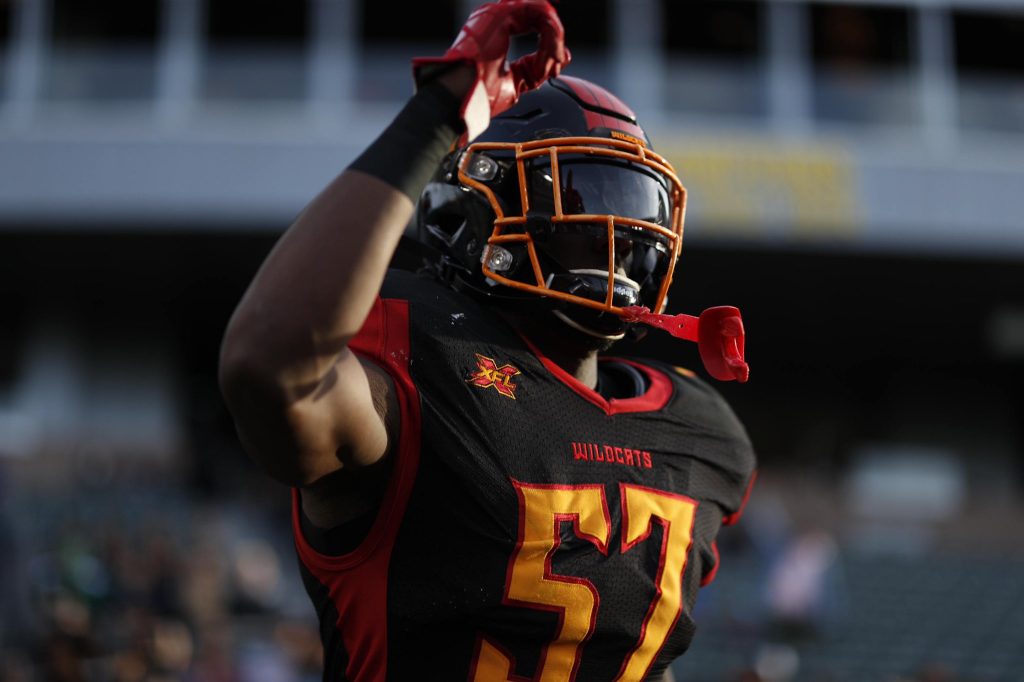 #57 Will Smith – LA Wildcats (Image provided by Will Smith)

Other than being six foot three inches tall and 225 pounds, you would never know how special Will Smith is just by looking at him. Will enjoys hanging out at the park with his one year old son and spending time as a father, but there is way more to Will than meets the eye.

Although you will likely find Will spending the majority of his days training or hanging out with his son, there may sometimes be a movie or a Double Western Bacon Cheeseburger from Carl’s somewhere in those days as well. Will is a special guy, with special talents that also enjoys his life as a dad.

Smith attended Riverside Notre Dame High School in California where he played with Kenjon Barber and his twin brother.

Coming out of high school, Smith had offers from UCLA and Utah State, but both of those offers fell through. Smith ultimately committed to Northwood University, a Division 2 school where he only played for one season.

After his freshman year, Will transferred to Riverside Community College, a junior college in California. Smith completed one amazing season at RCC, and was the #4 junior college recruit coming out of his sophomore year.

Although Smith didn’t get immediate offers from big time schools, it didn’t deter him much from chasing his dream of playing in the NFL.

“It didn’t deter me too much. Went to play with my brother and played at a small catholic school. I already had that mindset of a bigger school player, but now you gotta do what you gotta do even harder to get noticed,” said Smith.

Once Will made his way into the transfer portal, Texas Tech came calling and it was a match made in heaven.

“That was the experience I wanted for college football,” said Smith. “I had some rough patches junior season, but during my senior year I just focused up and made it work.”

During that senior year, where he “made it work,” Smith totaled 126 tackles while being the clear leader on and off the field for the Texas Tech Raiders.

Drafted to the Cowboys

A match that was truly made in heaven was when Jerry Jones came calling during the 2014 NFL Draft. Not only did Will get to stay in Texas, but being drafted to America’s Team was a dream come true.

“You get a lot of calls beforehand, and I knew I wasn’t gonna be a first day guy. You see guys getting picked that you don’t even know throughout the process,” said Smith. “I had to take a walk to clear my head. While I was outside, I saw my phone ring and the 214 area code came up and thought it was a scout but then it was Jerry Jones.”

Most athletes sit on the couch surrounded by family and friends while waiting for “the call” but Smith got to enjoy the moment while watching his friends and family go crazy inside.

“I answered and Jerry said how would you like to trade in the red and black for silver and blue? Then I talked to Jason Garrett, special teams coach and linebacker coach. The whole time I could hear my family screaming and then everything really just went full circle,” said Smith.

Once the honeymoon phase wore off, it was work time for Smith. After a grueling training camp, Smith ended up on the practice squad due to an injury he suffered during camp.

“I didn’t know anyone before me to play pro ball, so to be honest I probably wasn’t in the best shape going into NFL camp,” said Smith

Smith’s first stint with the Cowboys ended quickly after the team released him off the practice squad to make room for defensive end Michael Sam.

Smith didn’t last long on the open market, and the Dallas Cowboys brought him back in October of 2014.

“It was the same thing, I was at home and they brought me in because I knew what I could do on and off the field,” said Smith.

During that stint with the Cowboys, Smith impressed Dez Bryant who at the time was in one of his best seasons with the team.

Unfortunately, Smith couldn’t stay with the Cowboys or make their active roster and was released during the final roster cuts in 2015.

In 2016, Will was able to land with the Hamilton Tiger-Cats of the CFL, and in 2017 returned to the Winnipeg Blue Bombers for his second stint with the organization.

“Canada was a cool experience, but it was a different game. I really compare it to college basketball with pads. It was a whole different speed,” said Smith. 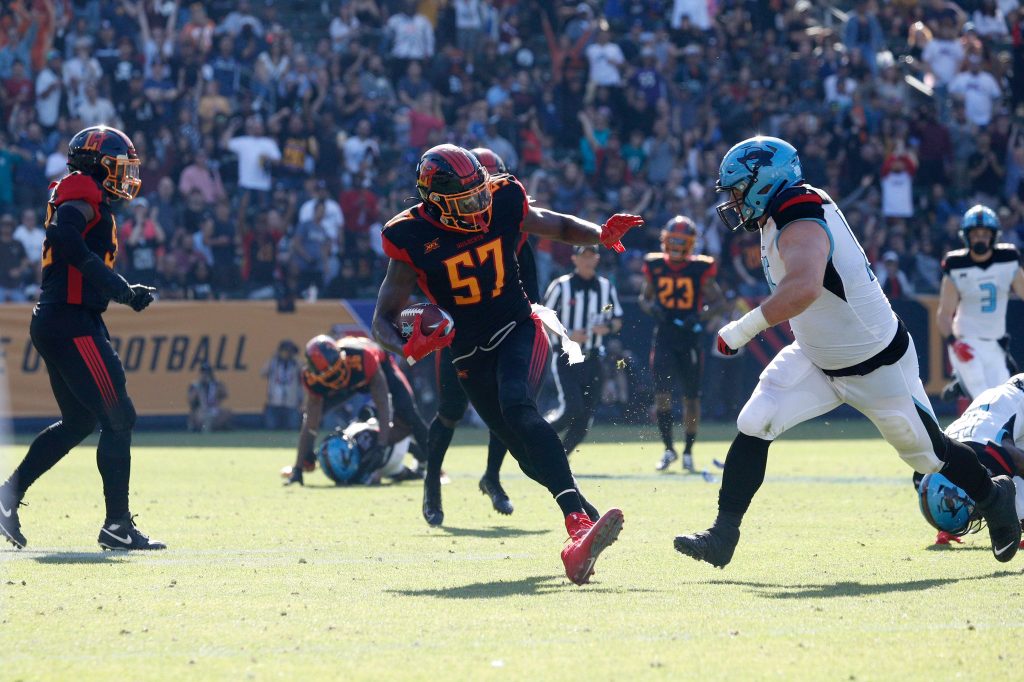 #57 Will Smith intercepts a Landry Jones pass during a XFL week 2 Wildcats – Renegades match. (Image provided by Will Smith)

However, none of Will’s experiences in the NFL or CFL matched the time Will spent in the XFL with the Los Angeles Wildcats in 2020.

Will met Eric Galko, director of personnel for the XFL, during his time in professional football, and it was Galko who sent Smith’s tape to LA coach Winston Moss.

Once Will was invited to training camp in LA and he showed out, but most importantly he had a lot of fun.

“XFL felt like college ball and the NFL combined. It wasn’t as tense but it was definitely professional football for sure,” said Smith.

What was it that made the XFL so fun? Well, it was a variety of things that helped Smith had so much fun in the startup league.

“Obviously, the kickoff rules I liked, but it was harder. The other guys are right there, 5 yards apart. If you made a mistake it was clearly out there on display for everyone to see,” said Smith.

But for Will, a California native, being close to home again was almost more important than anything.

“The best part was that this was my first time playing at home in front of my family since the Holiday Bowl my senior year. Loved the interaction with the fans, on TV and on the sideline. At first it was a bit much, but once I got used to it, it was super fun,” said Smith.

For a league that prides itself on being #ForTheLoveOfFootball and being a league that had their commissioner contributing to a beer snake in the nation’s capital, they achieved their goal with Will.

Through all of his time in the XFL, Will has also been taking care of his young son. Will spent the entire time during this interview on a park bench watching his soon to be two year old son play on the playground.

“It is definitely hard with how young my son is. Finding time to exert all my resources training while he is napping, but this is what I want to do. I want to be a dad and play football,” said Smith.

If the XFL comes calling in 2021, Smith will be ready. If not, he will continue to train, continue to be an amazing dad, and continue to have fun. 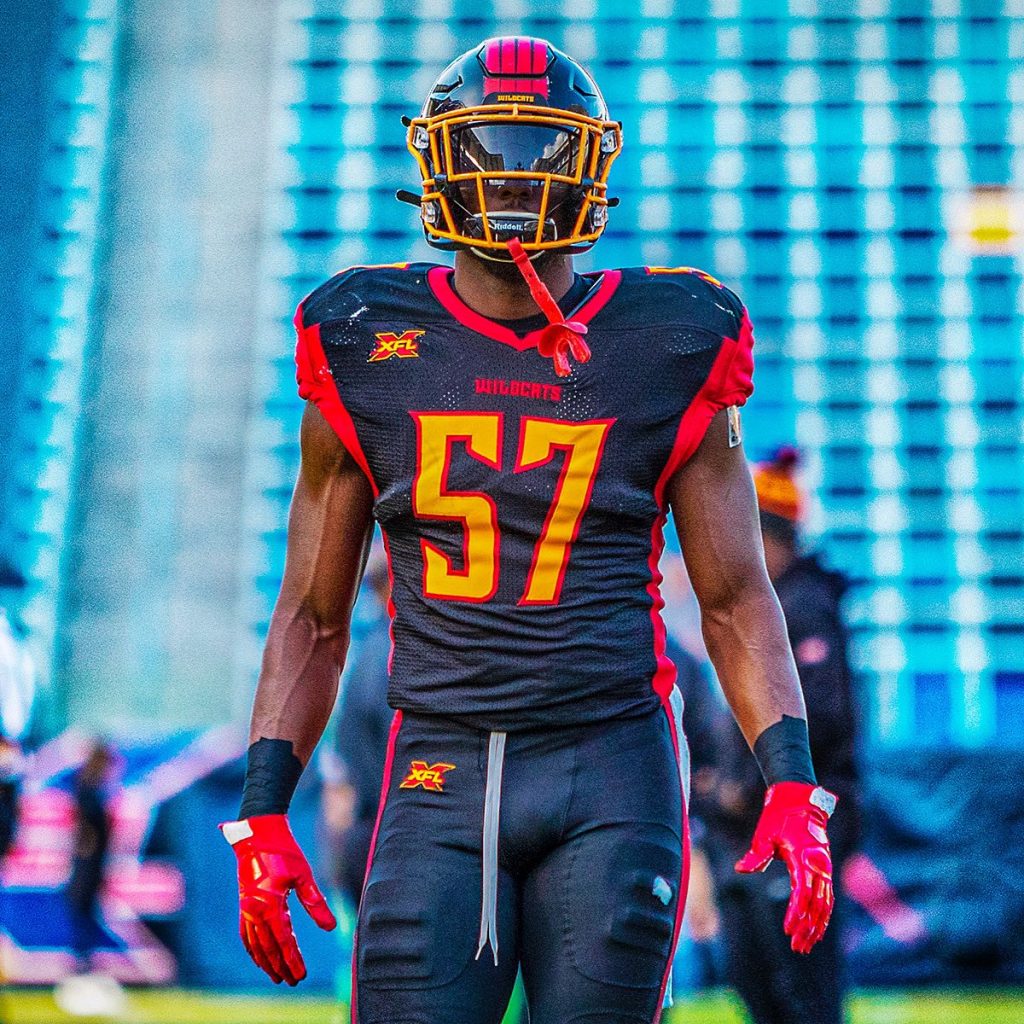 #57 Will Smith – LA Wildcats (Image provided by Will Smith)