Chad Kanoff may have been one of the most underrated quarterbacks that played in the XFL. 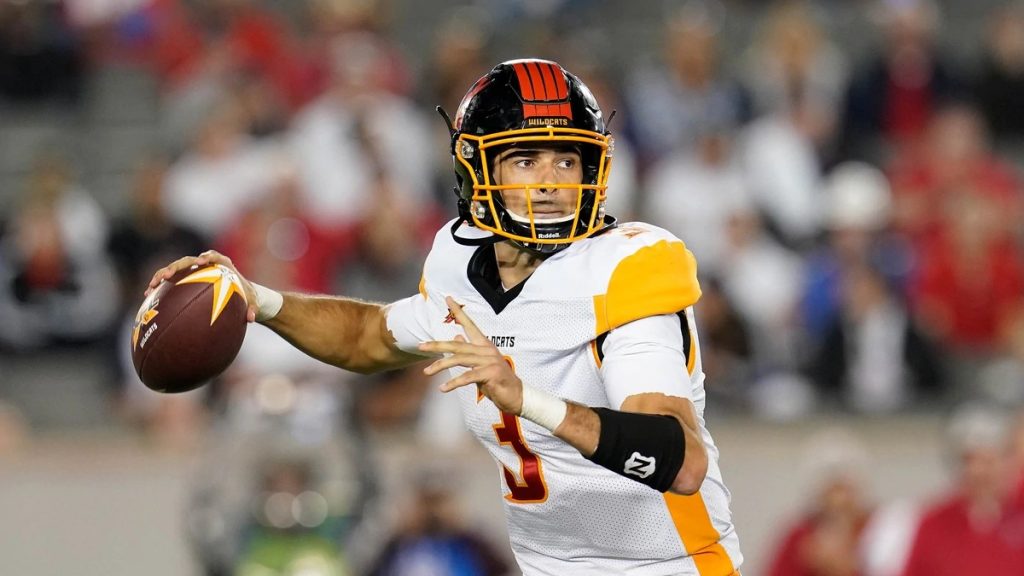 Charles “Chad” Kanoff may have been one of the most underrated quarterbacks that played in the XFL. He did just play in one game with the Los Angeles Wildcats, the first game of the season against the Houston Roughnecks. Unfortunately, he was injured and did not appear again.

Actually, Kanoff was involved in the first-ever XFL trade with Luis Perez. That the trade sent him from the New York Guardians to the Los Angeles Wildcats.

In his XFL game, Kanoff went 21 for 39 through the air for a total of 214 yards with one touchdown and one interception.

A lot of variables went down though, such as his helmet audio going out so he could not hear the coach Winston Moss at various times. If Kanoff could of heard his coach, and been on the same page, he easily could have had a better game.

Kanoff also scrambled into the endzone for the first-ever touchdown in Los Angeles Wildcats history.

The rush was from the 10-yard line, Kanoff put on a juke and took a tap below the knee before diving into the endzone for the touchdown.

From his time as Wildcat, Kanoff showed off that he is a great leader. He put his body on the line multiple times to make the play. He also is not afraid to test coverage in the air. Kanoff has to be one of the guys who has the best deep ball.

Kanoff went undrafted coming out of Princeton University in 2018. He signed with the Arizona Cardinals as a free agent and stayed the season majority of the time on the practice squad.  Although, Kanoff was called up to the NFL roster on November,24,2018.

The quarterback also had brief practice squad stints with the Detroit Lions and the Tampa Buccaneers before signing to the Los Angeles Wildcats.

As a three year starter at Princeton, Kanoff put up great numbers as a Tiger each season.

In his sophomore year on 355 pass attempts, he earned 2304 pass yards alongside eight touchdowns and seven interceptions.

That is a crazy difference in stats from just junior to senior year. Kanoff really showed why he deserved his NFL opportunity.

Kanoff has great attributes all over. Sure, he may be an old school pocket passer. But he is not afraid to run with the ball when necessary.  A decent comparison to him would be Daniel Jones of the New York Giants.

Kanoff is just one of many XFL players that should have had an NFL opportunity after the XFL season ended.

Who knows, maybe we will see Kanoff come back to the XFL in 2022 and put up some more great numbers. He is only 26 so he is still somewhat young and has some good time to settle in and be a great prolific passer.

XFL Quarterbacks that could help the Cowboys
XFL 3.0 has begun discussions with St. Louis facilities