Giorgio Tavecchio has traveled a long road to professional football. 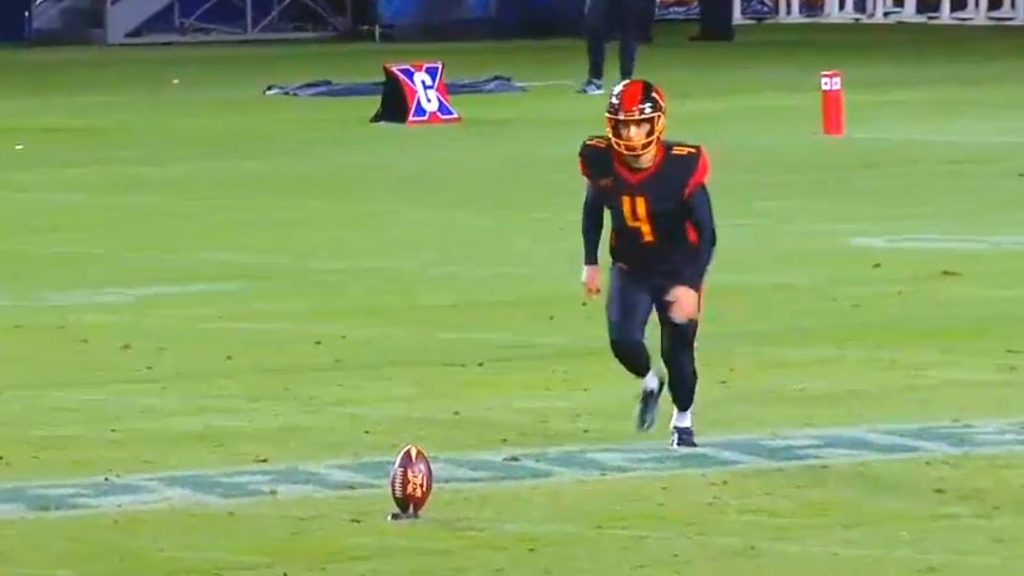 XFL Week 5: Giorgio Tavecchio kicks off for the LA Wildcats.

Tavecchio was born in Milan, Italy before moving to America at the age of four. His first love in sports was actually soccer, which is the primary sport in Italy. But, that lasted until Tavecchio found a football opportunity in front of him. “Growing up as a soccer player, my transition to playing football in High School started out rather innocently but ended up changing my life.  I experienced a sense of camaraderie and adrenaline I had never experienced before, which is unique to football and takes a while to adjust to.”  Tavecchio said.

Tavecchio would play soccer all the way up until just days before his first football game as a freshman at the Univerisity of Cal. He tried out for the team just two days before their first game as a walk-on and was given the chance to start at kicker for the Golden Bears. The left-footer was actually planning to go to college on a soccer scholarship at the University of California-Davis.

Blasting Boots for the Bears

As a Golden Bear, Tavecchio was a four-year starter. He was always very solid field goals, a career 75% but as a senior, he was 87% successful on his field-goal attempts. That year, he would lead the entire PAC-12 conference making 20 field goal attempts. He had a college career 93.3% success rate on extra points. Including nailing all 39 of his attempts between his freshman and sophomore years.

Tavecchio would have a rough patch in the road after college after not receiving an NFL Combine invite. He would not let that hold him back.

Making a Name for Himself in the NFL

After going undrafted, he would find a home with the San Francisco 49ers. Tavecchio signed a three-year, $1.44 million contract with the 49ers. Here is where he would sign with a plan to eventually fill in David Akers’ shoes when he decided to hang it up. Akers at the time was one of the best in the NFL, also a fellow lefty.

Tavecchio was waived by the 49ers in the offseason. He has then bounced around from between the Green Bay Packers, and Detriot Lions.

Now, after that is when Tavecchio finally found the mold two years after sitting behind David Akers, he is behind another great lefty kicker, Sebastian Janikowski. But it would be three more years until he sees his first NFL regular-season action with the Oakland Raiders.

Tavecchio would be promoted from the practice squad on September 9, 2017, after Janikowski was placed on injured reserve with a back injury.

In his first game, he came in with a bang. Tavecchio played his first game on September 10, 2017, where he kicked and converted four field goals on four attempts, including two 52-yard attempts, and two extra points on two attempts. He would earn the game ball for that game. Tavecchio would also be the only NFL kicker in history to make two 50 plus yard field goals in his first career game. Tavecchio’s stellar performance in Week 1 earned him the AFC Special Teams Player of the Week honors.

He would go on to start every game in 2017 for the Raiders. Overall, he finished the 2017 season hitting 33-of-34 of his extra-point attempts converted to go along with a solid 16-of-21 on field-goal attempts.

After playing with two of the greatest NFL left-footed kickers arguably in history.  Tavecchio said “I consider myself tremendously lucky for having gotten the chance to spend time alongside David Akers and Sebastian Janikowski!  They are both legends in their own right (…or left foot 😉  ) and I’ve learned a lot from the both of them, on many different levels.”

Flying in as a Falcon

Next stop after being released by the Raiders on August,3,2018 was the Atlanta Falcons signing him on August,27,2018 but didnt make his apparence until October,10th. Tavecchio this time was replacing an injured veteran kicker, Matt Bryant.

His first game as a Falcon he blasted a 56 yard field goal which easily would have been good from 65. Tavecchio was a perfect 2 for 2 on extra points and 3 for 3 on field goals, including  that career long 56-yarder. He would earn the NFL Special Teams Player of the Week.

“It was a surreal moment that I will never forget!  As I said in a post-game interview, “my mind was quiet but my heart was on fire”. I’m grateful to have gotten the chance to contribute to the team’s success that night.” Tavecchio said on nailing the 56 yard field goal.

Signed to replace Nick Novak, another NFL veteran, Tavecchio would join the Los Angeles Wildcats on March 4, 2020. He would only get to play one game in the XFL, but it was memorable.

“I really enjoyed my time in the XFL with the LA Wildcats!  The atmosphere was very competitive yet relaxed as guys played for the love of the game.  It was a refreshing perspective on football!” Tavecchio said.

As a Wildcat he would only attempt one field goal but kickoffs is where he stuck out. He booted seven kickoffs. with three where inside the 20, showcasing his accuracy and leg.

The now veteran lefty Tavecchio is always staying ready. “I continue to challenge myself to grow as a person, while trying to stay disciplined with my training- lifting and kicking three times a week each.  God willing, this wild adventure will continue,” Tavecchio said.

He has film working out with a few other XFL specialists such as Taylor Russolino, and Brock Miller.

This week there were rumors that the Green Bay Packers brought in Tavecchio to possibly succeed the veteran, Mason Crosby.

Well when it comes to a kicker you want accuracy and a big boot. The Italian born Giorgio Tavecchio will give your team the spice it needs. When it comes to big time kicks or staying calm in the big moment he is your man.

Tavecchio has already been through a lot in his football career so with that the question about his favorite moment of kicking career arose “It’s difficult to pick one specific moment, but I must say that when I strike the ball perfectly, it is a beautifully cathartic feeling; like poetry in motion,” Tavecchio replied.