John Ferguson does a detailed stats analysis of currently rostered XFL players by looking into the wide receiver position.

We will continue our deep look at historical stats analysis of currently rostered XFL players by looking into the wide receiver position. There are a lot of players to look over here with experience ranging everywhere from college, NFL, AAF, CFL, and Arena leagues. We’re just going to focus on college, NFL, and AAF since they offer the closest match to what we expect to see from the XFL.

Here is a look at all college production from WRs currently in the XFL filtered by most receiving yards: 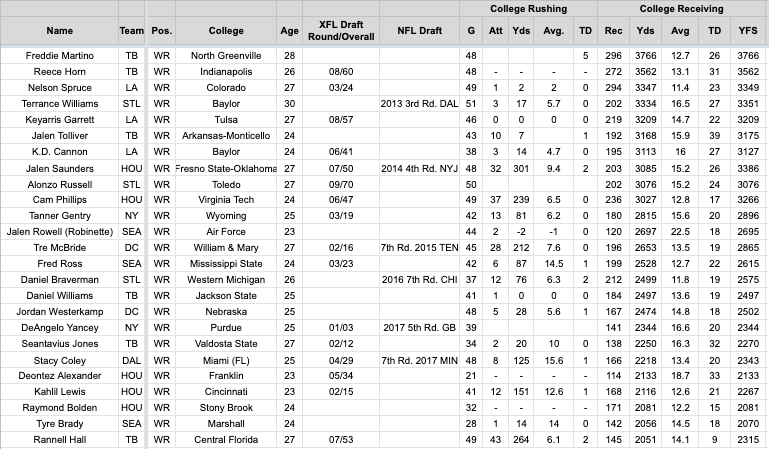 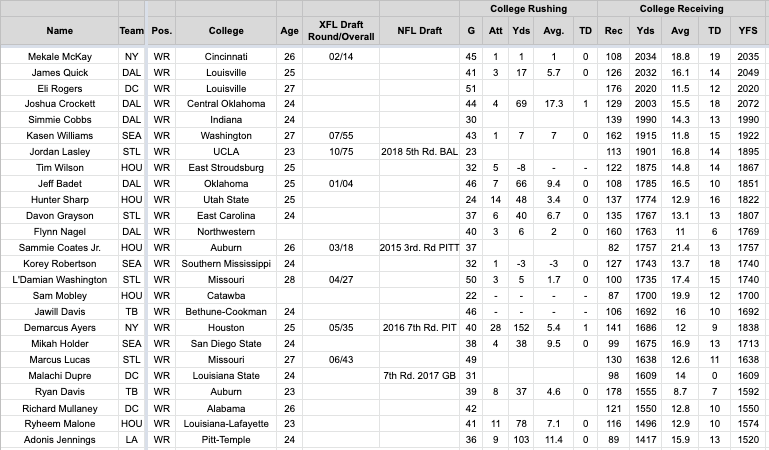 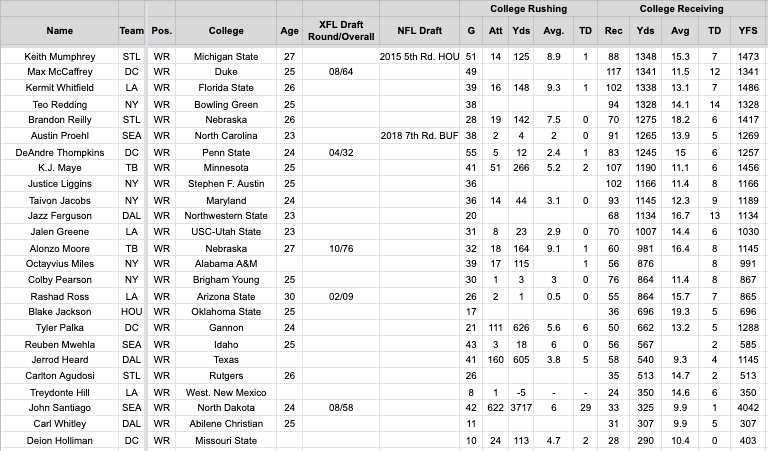 Small-school guys dominate these lists as well with Freddie Martino being a product out of North Greenville. He has spent time in the NFL with the Falcons, Eagles, and Bucs. He was in the AAF with the Apollos and Hotshots. He’s also a former track athlete.

Jalen Rowell also played under the last name Robinette for the Air Force. He was actually on the draft radar for the NFL but needed to fulfill two years of service before being eligible to leave for the NFL which kind of derailed his professional career track. He’s an under the radar name I’m excited to see play at this level.

Jalen Tolliver played at Arkansas before transferring to Monticello. He spent some time with the Cardinals in the NFL.

Here is a breakdown of each individual team’s wide receiver corps as they stand. These rosters are based on the official team rosters on the XFL website. Unfortunately, the league hasn’t really strived to keep lines of communication open and clear with the public thus far, but this is the best we have at the moment. Rosters are still really fluid so these will change before opening day. We also haven’t seen any official depth charts yet, so I currently have team rosters filtered based on most college receiving yards.

There are two ways to best analyze the team stat totals here. First, we will look at just gross team totals which is just looking at the sum of all production. But, with rosters containing varying amounts of players at WR, we will also look at per player averages to get a better idea of the average quality of players on rosters to level the playing field. For receiving averages, players need at least 10 catches and 100 yards to qualify for averages so that the team’s totals aren’t dragged down by players with super limited production.

Tampa Bay is unsurprisingly sitting at the top for most of this production as well. We saw in the individual player stats how their wideouts dominated those lists. If you read through the running back stats analysis, Tampa came in at the bottom of the power rankings there, but their receiving corps is possibly one of the best in the league. It will be interesting to see how their offense rounds out.

At the other end of the running back list, Seattle was at the top and along with their strong RBs in the backfield, they have two players who can cause problems all over the field in John Santiago and Keenan Reynolds. I am really curious to see how both players are utilized. Santiago has reportedly been dealing with some injuries early according to XFL Board’s Dragons correspondent Jackson Conner. Hopefully, he is ready for kickoff.

Tampa Bay stays on the top of a lot of these stat categories even when you break it down to averages which is pretty impressive. New York and DC find themselves at or near the bottom often. And I have to say, for all the talk of Dallas as potential league winners on the backs of Landry Jones and Bob Stoops, they leave a lot to be desired when it comes to pass catchers. None of their receivers had prolific college careers, they have zero NFL game experience, and only James Quick had limited experience in the AAF.

There isn’t really enough NFL experience in the league to warrant building an entire table to compare, but we can look real quick at names we might remember. Terrance Williams brings the most NFL experience to the table for St. Louis as a former wideout for the Dallas Cowboys. Williams has 3,377 receiving yards and 20 TDs in his career. This adds to the depth of former NFL talent the Battlehawks have with both Christine Michael and Matt Jones in the backfield. If these guys were cast aside too early from the bigs and can show they still have something left in the tank, they could dominate in the XFL.

A pair of former Steelers wideouts brings more NFL experience to the league. Eli Rogers is currently playing for the DC Defenders while Sammie Coates is in Houston. Rogers brings a career 78-822-4 line while Coates went for 29-528-2.

Jalen Tolliver and Jawill Davis also bring limited experience while Seantavius Jones and Rannell Hall were both activated to big-league rosters but didn’t put up any stats. Oddly, TB has a lot of NFL experience despite being only one of two teams in XFL who doesn’t have a single wideout who was drafted by an NFL team. Los Angeles is the other. Both teams have solid WRs corps though. This is what the XFL is all about. Finding value and talent in players the NFL may have missed.

There are a lot of names you will remember if you followed the Alliance last spring. Once again, Tampa Bay finds itself on the top of the list here when it comes to most production from former AAF wideouts. They have Freddie Martino, Reece Horn, Daniel Williams, Seantavius Jones, Rannell Hall, Alonzo Moore, and Donteea Dye who were all members of various teams. Together, they combine for 120 catches, 1,626 yards, and five TDs.

Other teams with plenty of AAF experience include the New York Guardians who have Mekale McKay and Demarcus Ayers. McKay was a big red-zone threat who tied for the league lead in red-zone targets and had the third-most receiving TDs. Seattle is the only team without a former member of the AAF in its WR corps.

Based on all of this, here is how I would rank the wide receiver corps for each team in the XFL going into training camp:

Experience all over the place is what seals the deal for me with Tampa Bay. They are also just an immensely talented group of wideouts. Aaron Murray also has one of the best track records of college production that you will find and showed some flashes in the AAF before becoming a turnover machine on a team that lacked superior talented in its pass catchers. With the crew he has now, Tampa is a sleeper for one of the top passing offenses in the league for me.

Los Angeles comes right up behind Tampa for me. Rashad Ross was an absolute playmaker in the AAF and Spruce was a great threat in the middle of the field which makes these two a perfect combo to share the field together. K.D. Cannon is another name to watch here who brings a lot of talent and sure hands as he led the Big 12 in receptions back in 2016. He has also recently spent time on practice squads with the 49ers, Jets, Rams, and Cowboys. Josh Johnson should also easily be a top-three QB in this league which gives the potential for production from this receiving group that much more appealing.

St. Louis and Houston are really close for me as they’ll both be led by former NFL talent in Terrance Williams and Sammie Coates, respectively. These two teams would be in a tier of their own outside of the top three and Houston gets the slight edge over St. Louis for me based on Connor Cook being the QB there. Cook was the second-overall pick in the XFL Draft and a fourth-round pick in the 2016 NFL Draft by the Raiders. The team also has former 2014 fourth-round pick Jalen Saunders who has spent time with the Jets, Cardinals, Seahawks, Saints, Patriots, and Bears. He’s also a phenomenal kick-return specialist. Houston used their second, third, fifth, sixth, and seventh-round picks all on wideouts, so you know it was a priority for them to get these guys early and utilize them heavily. For St. Louis, outside of Williams, every other WR on their roster has had experience on NFL practice squads at the least with the exception of Damoun Patterson to my knowledge.

New York and Dallas bring up the rear here in the rankings, though I’m not declaring either a bust. New York used its first three picks in the XFL Draft on wideouts DeAngelo Yancey, Mekale McKay, and Tanner Gentry. The competition is close in this league at WR and this could wind up being a really strong trio of wideouts if Matt McGloin shows well under center. There is no NFL experience amongst these wideouts, however, and the depth they have is relatively unknown talent.

Dallas is hard to put at the bottom based on Landry Jones being the QB, but I just don’t really see a legitimate WR1 on this roster right now. Jeff Badet carries high draft capital based on being the fourth-overall pick in the XFL Draft but had middling production at Oklahoma. Jazz Ferguson was a draft darling for many in the NFL the past season but has dealt with personal issues and ultimately couldn’t crack the roster for the Seahawks this season. Dallas does have some of the best pass-catching RBs in the league and they might be needed to fill the holes here. A strong showing in training camp will help push Dallas up the list for me.

That’s all we have for WRs for right now. Thanks for reading and I would love to hear your thoughts on this. Feel free to hit me up on Twitter @FantasyFerguson.