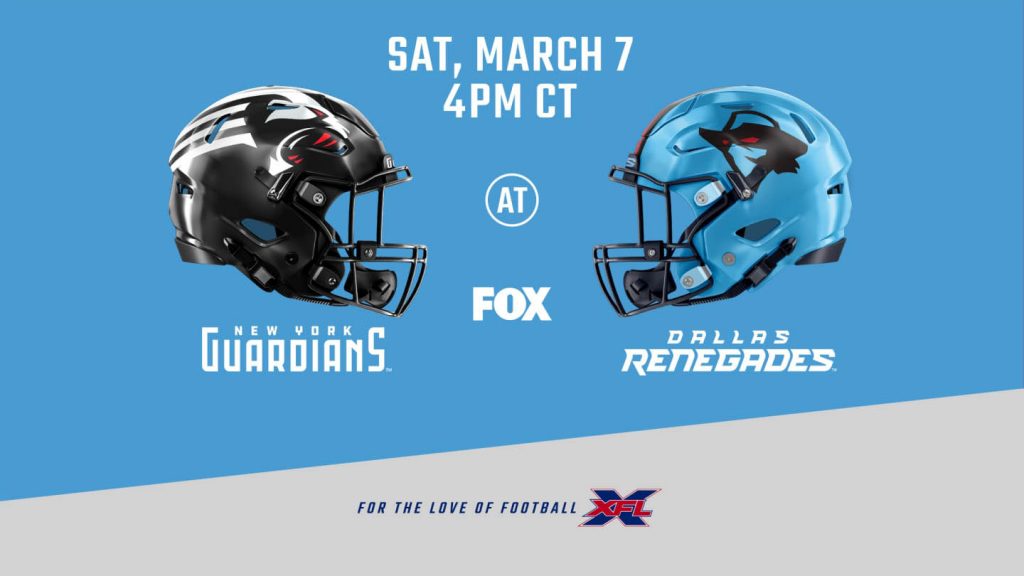 The New York Guardians and Dallas Renegades have had a unique path to this upcoming game.

Both teams share 2-2 records, but the road in which they got there is entirely different. The Guardians have two home victories in as many games and were blown out on the road by D.C. and St. Louis, by a total of 56-9.

The Renegades have yet to win at home, despite two tightly contested games with the undefeated 4-0 Houston Roughnecks and the 3-1 St.Louis BattleHawks. Both of the Renegades victories have come on the road against divisional opponents, L.A. and Seattle.

0-2 on the road (NY) verses 0-2 at home (Dallas). Something has to give. Besides their records, Dallas and New York also share in the fact that they have turned to a backup quarterback to keep themselves in playoff contention.

For New York, Luis Perez, came out of the bullpen to get the Guardians a much-needed victory against his former team, the L.A. Wildcats last weekend. Original starter, Matt McGloin, is set to return from injury and is looking to reclaim his spot. New York may want to keep their opponent guessing, but the logical play is to keep Perez at the controls until he gives you a reason to not be in that position.

For the Renegades, Phillip Nelson is being called upon again to keep Bob Stoops’ team in contention until Landry Jones can return. Nelson started in Jones’s place in week one and spelled Landry in relief last week when Jones reaggravated a previous knee injury.

* The Guardians activated WR Tanner Gentry off of their short term injured reserve but he wasn’t active last week. WR DeAngelo Yancey is working his way back from injury and could follow Gentry’s lead.

Matchup: The Guardians offense versus the Renegades defense

New York is last in the XFL in scoring per game. (12.2) Last in yards per game (230). Last in pass yards per game (142.8) and finally, last in yards gained per play (3.2). Yet despite all of this, there is a sense of optimism that the Guardians’ offense is starting to trend in the right direction.

Since being thrown in the fire, Quarterback Luis Perez has completed 70 percent of his passes. The Guardians are getting healthier at receiver with the return of Tanner Gentry, and the eventual return of DeAngelo Yancey, two of New York’s top drafted receivers. The offense is close to finally being whole.

However, the area that has seen the most improvement in recent weeks is the Guardians’ ground attack. Two weeks ago, New York rushed for over a hundred yards with the duo of Darius Victor and Tim Cook. Last week against L.A., they combined for 114 yards at over 4 yards per carry with Victor having his best game of the season (18-82). The Guardians are not quite there yet offensively, but the emergence of their rushing attack is a proper setting off point. New York would love to try and control the line of scrimmage against a banged-up Dallas front seven.

The Dallas defense led by Chris Woods has been a huge reason why Dallas is 2-2 and has been in every game this season. They rank at or near the top in almost every defensive category. The one area where Dallas has struggled is in generating a consistent pass rush. (6 sacks in 4 games).

The extra time in the pocket for opposing passers has given them time to go through progressions and find the third and even fourth read—an overlooked aspect when outlets attempt to grade the Renegades secondary. Two standouts for Dallas have been Cornerback Josh Hawkins and Safety Derron Smith. Hawkins was tasked last week with covering Roughnecks star receiver Cam Phillips and held him to 1 catch for nine yards. Safety Derron Smith was the #1 graded player in the entire AAF last season. Smith has lived up to his billing thus far with Dallas. In coverage and with his tackling.

The lack of a Renegades pass rush should, in theory, give Luis Perez time to go through his reads. The Guardians have struggled to make great use of their star receiver Mekale McKay. Josh Hawkins will undoubtedly be tasked with covering McKay one on one. Mekale presents a different challenge for Hawkins than Phillips did. Hawkins (5’10) used press coverage heavily against Phillips (6’0), but against the 6’5 McKay, the same type of strategy may not pay off. New York started incorporating their tight ends in the offense last week with EJ Bibbs and Jake Powell (5-58). Until Gentry and Yancey get back to full speed, New York will have to continue to lean on their complimentary pass targets. Wide Receivers Colby Pearson and Austin Duke need to win their one on one matchups for New York to have a chance on offense.

Matchup: The Guardians defense versus the Renegades offense

Hal Mumme’s Air-Raid offenses have had a history of breaking records. Nowhere in the legends playbook does it consist of coordinating an entire attack with a broken leg. That’s what Hal Mumme did last week, after star running back Cameron Artis-Payne barrelled into him on the sidelines.  Not only did Mumme continue to call offensive plays on the sideline after breaking his leg, but he also had to deal with losing his starting Quarterback to injury in Landry Jones. Despite all this adversity, Hal Mumme will never throw in his trusty towel.

The Renegades rank third in the XFL in yards per game offensively (344), but there is a sense that Dallas has underachieved on that side of the ball. Dallas appeared to be heading in the right direction with Landry Jones returning and winning his first two games, but turnovers and a lack of explosive plays have held the Renegades back from achieving their expectations.

With Landry Jones out, Phillip Nelson is back in the saddle. In week one, Nelson was highly efficient on paper (33/42), but he only produced 199 yards and no touchdown drives. Avoiding turnovers will be important but making big plays down the field will be as well for Nelson.

The Renegades offense is designed for short and quick throws underneath. Mumme has a history of exploiting defenses and creating mismatches in space. The shallow crossing routes have been a staple of his system for decades, but despite the talent that Dallas has at receiver in 4.2 speedster Jeff Badet, Jazz Ferguson, Flynn Nagel, and Freddie Martino. The WR’s in Dallas has yet to be the focal point of the Renegades attack. The Wildcats last week, attacked the Guardians down the field with success. This might be the time for Dallas to attempt the same strategy.

The Guardians’ defense has been at its best when it can create pressure on opposing quarterbacks. Bunmi Rotini, Cavon Walker, and Jarrell Owens have played well in recent weeks. If they can pressure Nelson and take away his first read, New York might make be able to slow down Dallas and keep them out of the end zone.

One player who is a matchup problem for every XFL defense is Tight End, Donald Parham. The 6’8 monster has incredible speed for his size and an ungodly wingspan (87 inches). The Guardians have maybe the league’s fastest linebacking corps but are lacking in size. New York does not match up favorably against Parham.

The Renegades boast one of the XFL’s best one-two tandems at Running Back in Cameron Artis-Payne and Lance Dunbar. Both have been terrific in the run and pass game. Dallas has been at their best this season when they have leaned on both players. Look for Dallas to try and run on New York’s 6th ranked rush defense (113.5 per game). It might be the Renegade’s best road to victory.

The winner of this game will position themselves nicely for the second half of the season.

For New York, a 3-2 record could put them realistically in the playoff hunt, regardless of what happens in the DC-St. Louis game. A loss by DC and a NY win puts them ahead of the Defenders for the final playoff spot in the east. A win by the Defenders, coupled with a NY victory, puts the Guardians in a three-way tie for first, with five games to go, and with two of those games being at home against D.C and St. Louis.

Dallas has yet to hit its peak as a team, particularly on the offensive side of the ball. They appeared to be headed towards it before another roadblock came with yet another injury to their starting quarterback.

This is a real crossroads game for New York and Dallas. The road will be a lot easier to navigate for the team who wins. The Renegades have been the better overall team in the first four weeks of the season, they haven’t upheld their home field yet, but I think they finally will.