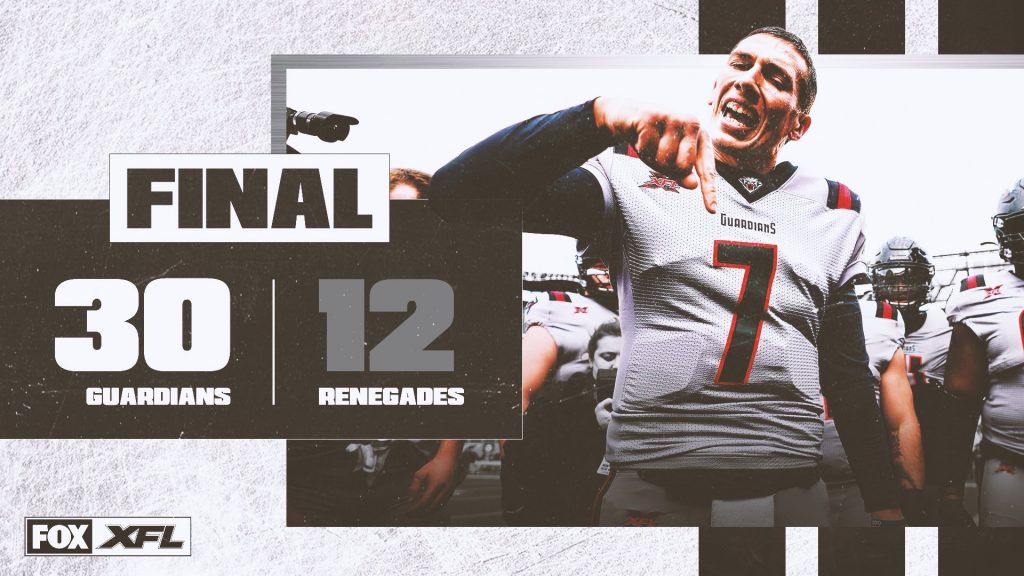 “Our season can go two ways right now, Up or Down. Today’s the day we turn it around. Obsession to detail,  play in and play out. Do your job, trust the guy next to you and I promise you, we will come out victorious”

Arlington Texas– The New York Guardians have turned their entire season around. Off the heels of their second home victory last week against L.A., the Guardians (3-2) led by recently appointed starting quarterback Luis Perez, played the most complete game of their entire season, besting the Dallas Renegades (2-3) 30-12 at Globe Life Park.

Entering week five, the Guardians were last in the league in every offensive category. From points they have scored, down to yards gained per play. For one half, despite another stellar performance by New York’s defense, and solid special teams play, it appeared as if New York’s offense would continue their early-season struggles. Through no fault of Luis Perez, the receivers had several drops, including one in the end zone, and squandered field position; this led New York to a 6-6 tie with Dallas at the half.

At halftime, Kevin Gilbride addressed his entire team and set them on the right course for the rest of the game.

“You wanted to turn this into a battle of wills. You wanted to turn it into mental toughness. You wanted to see who wanted it more. My money is on us, it’s on you. Defensively, you’re playing your ass off. Offensively, they can’t even stop you. All you have to do is make the plays that are there to be made. They’re there!  The kicking game, you’ve won games for us before, let’s go win it now as a team”.

Following Gilbride’s halftime speech, the Guardians ended up playing what may have been the best half of football by any team in the XFL this season. Save for one long 92-yard kick return for a touchdown by Dallas’s Austin Walter. New York got the job done on all three phases.

The Guardians marched down the field 76 yards for a touchdown on their opening drive of the second half. The Guardians pass game finally started clicking, as Luis Perez connected twice down the field to Mekale McKay for 45 yards. New York’s three-headed ground attack of Darius Victor, Tim Cook, and Justin Stockton  (32-144), drove the Guardians down to the one before Quarterback Marquise Williams capped off the drive with a one-yard td run.  The Guardians would take a 12-6 lead and never relinquish it.

After forcing the Renegades offense to punt late in the third quarter. Despiting missing both starting offensive tackles, John Kling to injury and Jarron Jones, suspension. The Guardians would immediately go on the attack, connecting on their longest play of the season, when Luis Perez (16/30 229 yards, one td) would connect down the field with Colby Pearson on a stop and go 80-yard catch and run for a touchdown. The longest play of the New York season. Perez would then connect with Justin Stockton for the 2-point conversion, extending the NY lead over Dallas to 20-6.  Almost immediately, New York would add to their expanding lead, when Defensive End Ryan Mueller would bat up and intercept Phillip Nelson’s attempted pass in the flat, and return it 33 yards for the score. A successful one-point conversion by Perez to McKay extended the Guardians lead to 27-6.

The New York Guardians’ defense continued to make life very difficult for Phillip Nelson and the Dallas offense. The Guardians were aided by great coverage from secondary standouts Dravon Askew-Henry and Jamar Summers. New York’s defense harrassed Phillip Nelson (28/49 210 yards, two interceptions) all afternoon long. Led by the XFL leader in sacks, Cavon Walker, who added another two sacks to his league-leading total of 4.5. The Maryland standout has played both DT and DE for New York, and he was in the Dallas backfield all day, finishing with seven total tackles. The Renegades failed to establish any semblance of a rushing attack, and save for Walter’s long kick return to cut the NY lead to 27-12. The Guardians were two steps ahead of the Renegades all afternoon long, leading towards their first road win of the season, decisively over Dallas 30-12.

The victory by New York over Dallas thrusts them right directly into the playoff race in the East. The Guardians now at 3-2, will wait to see who wins tomorrow in DC, between the 3-1 St. Louis BattleHawks and the 2-2 Defenders. Should the Defenders win, it will create a three-way tie for first, with just five games remaining in the regular season. New York has two home dates remaining with both St. Louis (Week 8) and D.C. (Week 9), should the BattleHawks win, New York takes over sole possession of second place and will control their destiny in the playoff race.

For the Dallas Renegades (2-3), by default, they remain in second place in the West with head to head victories over Seattle, and L.A. Dallas heads to D.C. in Week 6, still looking for answers, while their starting Quarterback Landry Jones remains out of the picture.

For the New York Guardians (3-2), they head back to MetLife Stadium, next Saturday at 2 pm ET on ABC, to defend their undefeated home record against the undefeated (5-0) Houston Roughnecks. 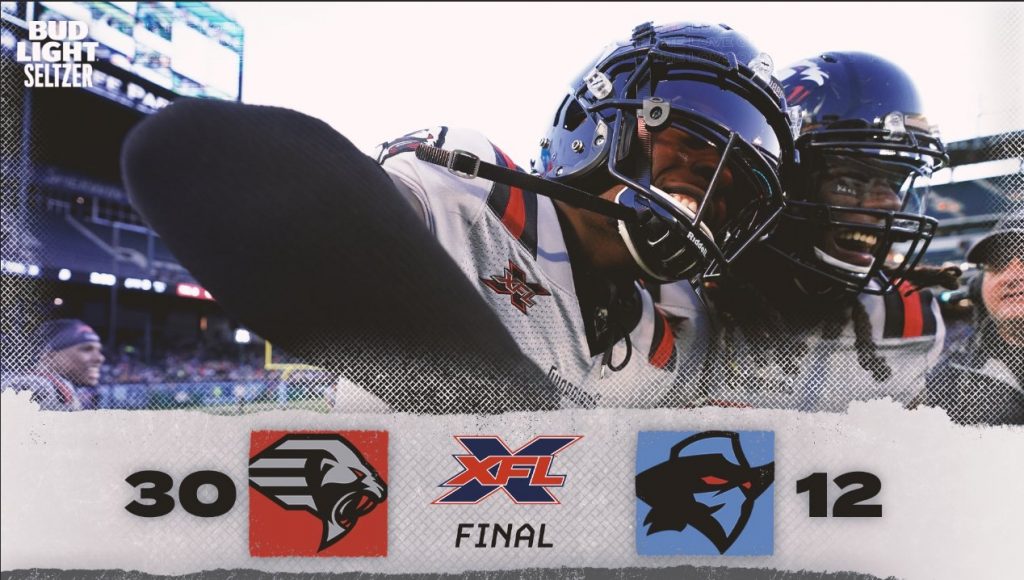