The Los Angeles Wildcats (1-2) travel to the east coast to face the (1-2) New York Guardians. 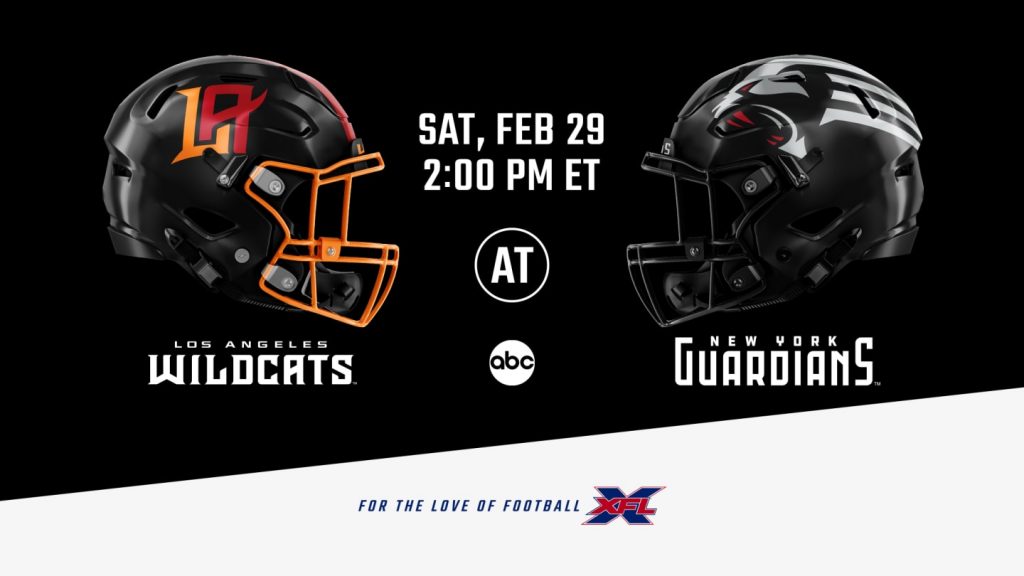 The Los Angeles Wildcats (1-2) travel to the east coast to face the (1-2) New York Guardians. Both teams share the same record after three weeks of play, but appear to be headed in opposite directions. Los Angeles is coming off a dominant 39-9 home victory over the DC Defenders. Quarterback Josh Johnson has stabilized the LA season after missing week one due to injury.

New York is coming off two straight demoralizing road losses within their division. The Guardians were outscored 56-9 in those two defeats. The most recent, a 29-9 loss to the BattleHawks in front of nearly 30,000 rabid St. Louis football fans.

The Guardians’ offense has been one of the league’s worst after three games. Unlike LA, New York has uncertainty headed into this game at the Quarterback position. Opening day starter Matt McGloin (thorax) is listed as out. New York will turn to backup Quarterbacks Marquise Williams and Luis Perez. Both have split reps all week in the lead up to this game. Williams and Perez could both see action on Saturday.

New York and LA are coming into this game off a short week of preparation. The Wildcats will be missing some vital pieces of their offense on Saturday. A good portion of LA’s main contributors from last Sunday’s win showed up on this week’s injury report. A few of them won’t be playing.

Guardians Wide Receiver Tanner Gentry has been activated off of short term injured reserve. It remains to be seen if he will be active for Saturday’s game.

Wildcats Fullback Winston Dimel has been activated off of short term injured reserve. LA’s ground game could get a boost with his presence.

Matchup: The Guardians offense versus the Wildcats defense

LA plays a 3-4 defense but has been disguising their alignments and coverages well in the last couple of weeks. Winston Moss, with help from his defensive staff, has taken over the play-calling duties since letting go of former Defensive Coordinator Pepper Johnson. The Wildcats frustrated Defenders QB Cardale Jones last week by mixing coverages and disrupting the timing of DC’s pass routes. The change in play-calling was swift, and seemed like an abrupt move by Winston Moss to outsiders, but it has paid off thus far. Winston took ownership immediately of a failing unit.

As a complete contrast, despite the Guardians’ immense struggles offensively, Offensive Coordinator G.A. Mangus remains in control of  New York’s attack. Kevin Gilbride has opted not to take the reins of the offense. Gilbride is an accomplished long-time offensive coordinator with years of success and experience, but he has decided to retain a CEO role as Head Coach/GM, rather than go back to what he does best.

Last week, the Guardians eclipsed 100 yards rushing for the first time all season with Tim Cook and Darius Victor both rushing for over a hundred yards combined. Both running backs averaged at least five yards a carry, and the team will lean on this committee to move the ball down the field with a banged-up Matt McGloin and an inexperienced duo at QB in Perez and Williams.

Despite playing in mostly a spread attack with ‘Fun N Gun’ elements from his days as a Steve Spurrier disciple, G.A. Mangus used some more base sets last week with multiple tight ends, and it worked to some degree. Look for New York to try and establish the run more. The Wildcats rank seventh in the league in rush defense. They have talent in their front seven, but players who have very little experience playing in an odd defensive front. One player who could factor into this week’s gameplan for New York is Justin Stockton. The former Texas Tech back, had some good contributions in the passing game last week and provides big-play potential.

New York has had instability upfront, and discipline issues. Center Ian Silberman is coming off of a horrible performance last week, which saw him lose his cool on multiple occasions before ultimately getting benched. Starting Guard Garrett Brumfield was placed on injured reserve. Veterans Damien Mama and Avery Young, who have seen extensive time in the first few weeks, could be utilized more in the interior. The Guardians added reinforcements upfront this week, with the additions of former CFL All-Star Derek Dennis, and former New England Patriots, and 4-year NC State starter Tony Adams. Keeping the pocket clean against LA’s active front will be crucial towards New York’s success. The Guardians have struggled in this respect mightily.

Quarterback Marquise Williams has a big arm and is very mobile. His skill-set could aid a struggling Guardians offense in moving the chains and extending drives.

New York’s passing attack has been erratic. Big play receiver Mekale McKay continues to be underutilized. Austin Duke had arguably the best showing for a Guardians wide receiver last Sunday with 43 yards on four catches and a touchdown. The former all-time leading receiver at Charlotte has earned himself more playing time. The return of Tanner Gentry can help the Guardians passing attack, but it remains to be seen how ready he is to contribute on a short work week and a long layoff.

One of the hidden storylines in this game is Luis Perez, potentially facing off against the team that traded him in LA. Perez was initially assigned to the Wildcats back in October and was positioned as the leader of the team early on. Perez, along with Norm Chow, worked extensively together with the Wildcat receivers before minicamps and training camp had commenced.

The addition of Josh Johnson changed Perez’s role with Los Angeles. Luis was traded to New York late in camp for backup quarterback Chad Kanoff. Perez was a prolific college player who showed flashes of his ability with Birmingham last year in the AAF. If Perez is up to speed on New York’s offense, only a month after being traded for, he could provide the spark the Guardians need, and he already has added motivation going into this contest.

Matchup: The Guardians defense versus the Wildcats offense

The Wildcats offense under Norm Chow has started to hit its stride in recent weeks. A big part of the early season turnaround has been the leadership of Quarterback Josh Johnson. One of the league’s most experienced signal-callers, Johnson has taken control of the offense rather quickly and has brought stability to the entire franchise.  Johnson has always had the ability to make big plays on the fly with his arm and legs, but it’s his vast experience as a pro that has helped his Wildcats teammates on offense get on the same page.

The Guardians have struggled mightily to stop the run. They rank last in the XFL in rush yards allowed per game (138). New York has really struggled to find the right mix in their front seven. The Guardians boast a large defensive line, with experienced pro defensive tackles, TJ Barnes and Joey Mbu manning the middle, but the Guardians undersized linebacking corps has not held up well taking-on and shedding blocks.

LA comes into this game potentially without emerging runner Martez Carter. The original starter at tailback Elijah Hood was benched last week for fumbling issues. The talented runner may be leaned upon again, in combination with Larry Rose. LA is big upfront on their offensive line, but has struggled early on to establish a consistent ground attack (last in the league in rushing). Look for the Wildcats to try and emulate what opposing teams have done to the Guardians defense in the first three weeks.

Tre McBride officially arrived on the scene last week for LA with five receptions for 109 yards and two scores. He should be LA’s main target with star receiver, Nelson Spruce, out with a knee injury. New York has had problems containing mobile quarterbacks and getting them down on the ground. Josh Johnson presents a similar issue for New York that they had with Cardale Jones and Jordan Ta’amu.

Defensive End Bunmi Rotini has emerged as one of the Guardians better defensive players, but the Guardians pass rush has been largely inconsistent since week one. Taking McBride out of the game, and pressuring Johnson will be key for New York, especially with safety valve Nelson Spruce not playing.

New York is heavy underdogs at home against LA, and with good reason. The Guardians have yet to establish their team identity on either side of the ball. New York has looked like a team that is still playing preseason games, while Los Angeles is finally starting to establish its identity offensively and defensively.

This is a crucial part of the XFL season, where teams start to get into midseason form before they make a push towards playoff contention. LA looks like they are ready for that challenge. New York does not.  A bye week would have benefited the Guardians in potentially resetting the franchise, but the short week keeps NY in status quo mode.

Normally, having a team from the west coast fly out to play on the east coast on a short week, would play into the home teams favor. The Wildcats are banged up and playing what is a morning game for them. (11 am PT). This should favor the Guardians but with their uncertainty at Quarterback. It’s hard to bet against Josh Johnson and what LA has shown so far with Norm Chow and Winston Moss.

This game takes place on leap day. Based on the Guardians’ performance in recent weeks, I am not ready to take a leap of faith yet in them turning things around. 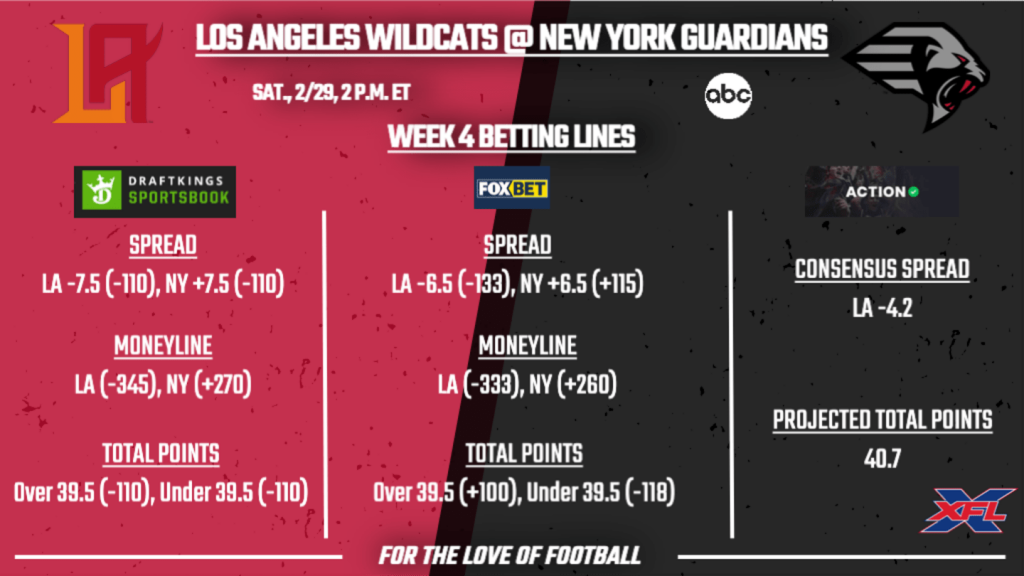