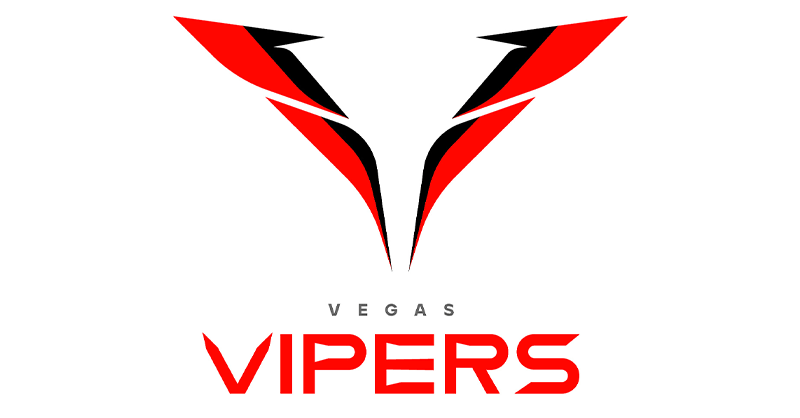 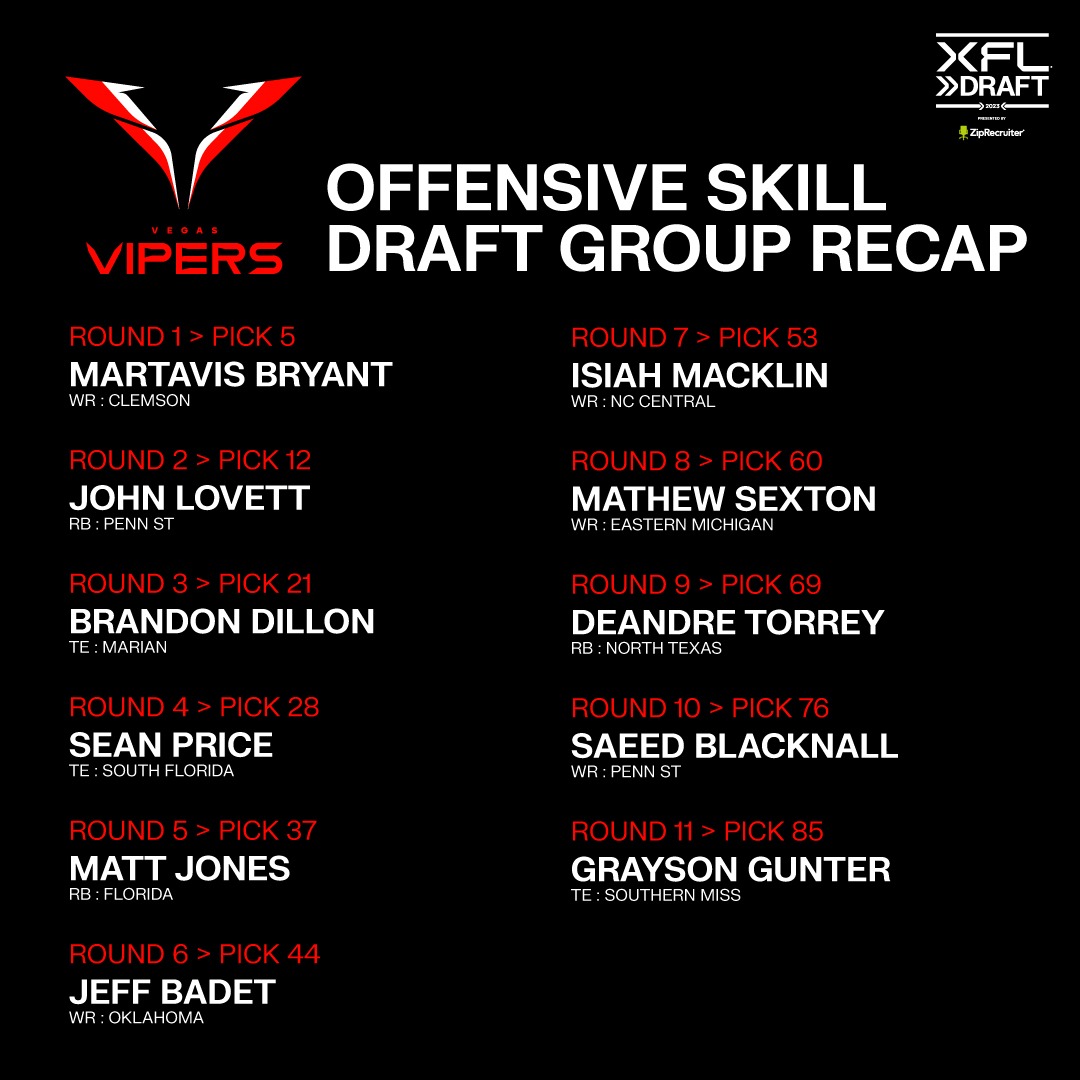 Vegas drafted perhaps the most well-known player in the pool, taking former Pittsburgh Steelers WR Martavis Bryant with their first round pick in the Offensive Skill Position Phase. He’s been out of the NFL since 2018, but has kept in shape by playing in the CFL and FCF. Five picks later, Vegas took their second receiver, Jeff Badet, who was chosen in the first round of this phase in 2019. “Big, physical guy…everything we want as a player, he has,” said Head Coach Rod Woodson about their first RB taken, John Lovett. Lovett can also return kicks and punts, an important trait in the XFL given that every kickoff will be returned, unlike in the NFL. Isiah Macklin is an interesting project who played tight end in college but is listed as a receiver here. 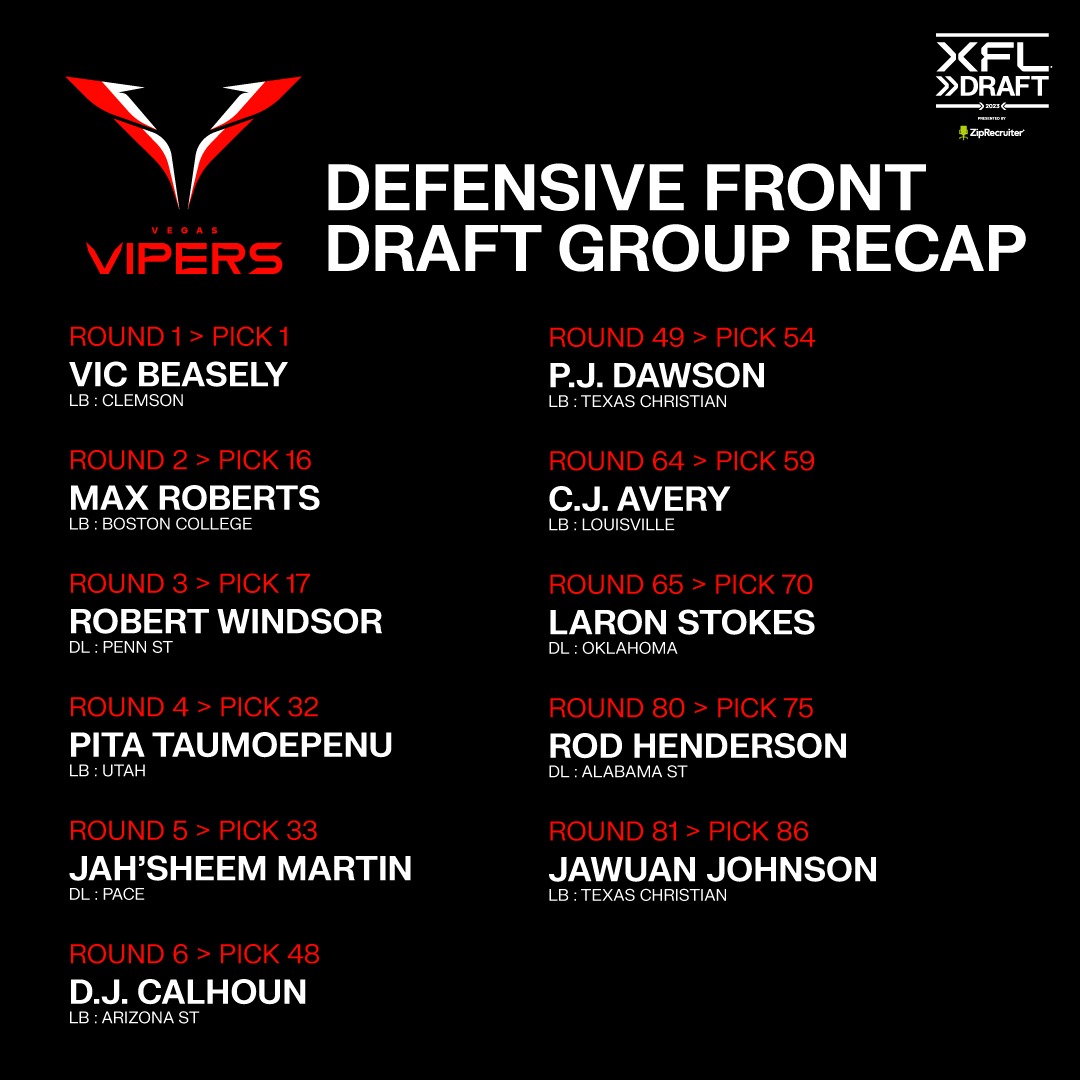 Vegas followed up their acquisition of Martavis Bryant with another Clemson Tiger with an NFL pedigree in the first round of the next phase, that being LB Vic Beasley. The former first-round NFL draft pick of the Atlanta Falcons was not known to be in the draft pool, making his selection quite the surprise for fans. The Vipers continued grabbing veteran linebackers, drafting PJ Dawson (3rd round pick of the Cincinnati Bengals, 2015) and Pita Taumoepenu (6th round pick of the San Francisco 49ers, 2017). Seven out of their 11 picks used on the linebacker position, perhaps in part as insurance in case some of the veterans do not report. Indianapolis Colts 2020 6th round pick DT Robert Windsor retired from the NFL in April, but was chosen here in the 3rd round. 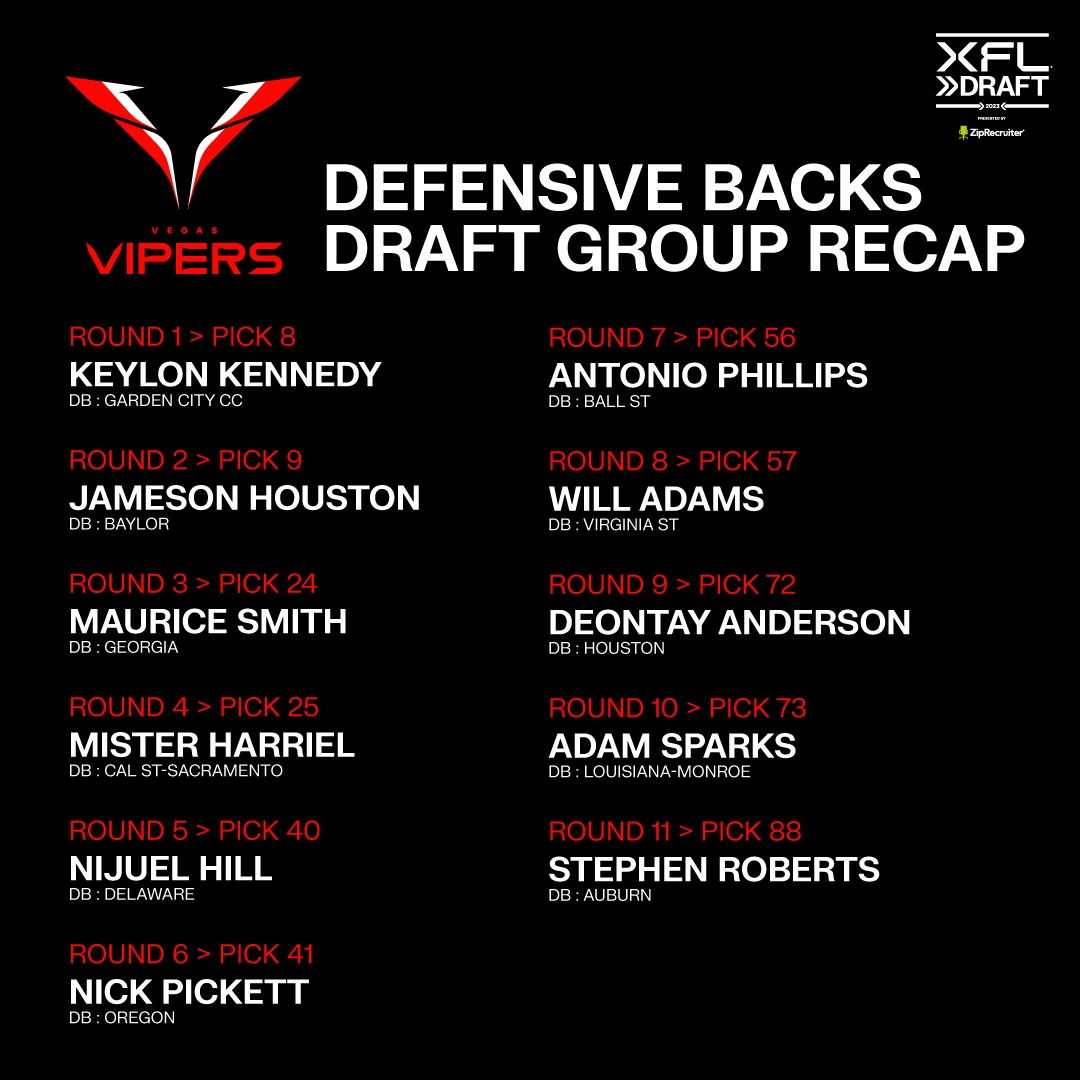 Garden City Community College put two players in the XFL Draft, CB CJ Anthony with the Defenders and Keylon Kennedy with the Vipers. Kennedy committed last November to play for Deion Sanders at Jackson State, but never enrolled. He ended up playing at the NFL Alumni Academy this fall and was the youngest player in attendance. After going veterans early in the first two phases, Vegas turned to youth in the first round in the DBs Phase. They buttressed the Kennedy pick with a couple veterans after him, however, in Jameson Houston and Maurice Smith. Will Adams was one of the top HBCU prospects in the 2022 draft class. Deontay Anderson of Houston will transition from linebacker to safety. 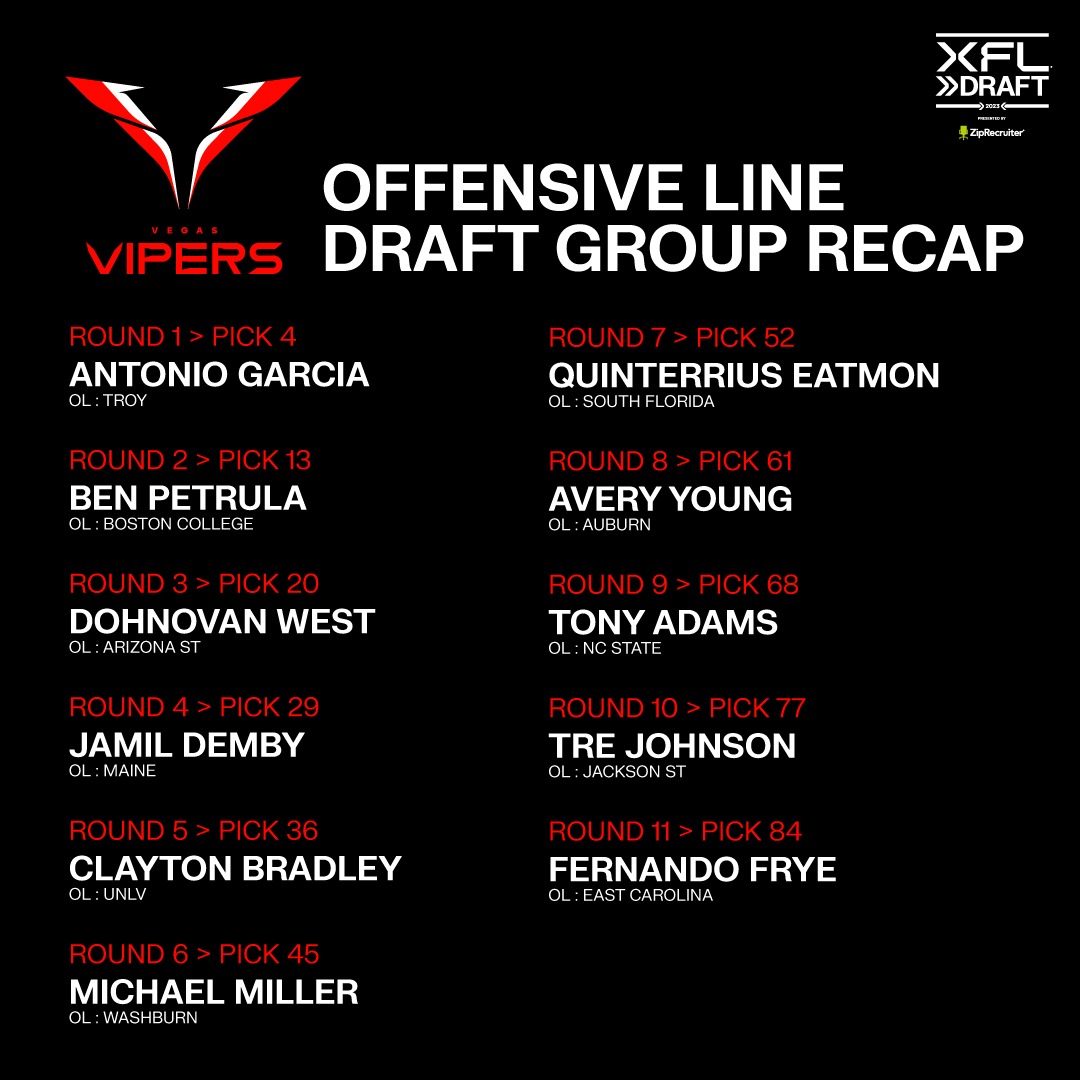 The Vipers used all 11 of their picks in the Offensive Line Phase, the only team to do so. They drafted a few of my top prospects in rookies Dohnovan West out of Arizona State and Ben Petrula from Boston College (both profiled as final cuts from NFL training camp the XFL should have interest in). They went veteran again with their first pick, Antonio Garcia, who entered the NFL in 2017. In total, six of the 11 picks began their NFL careers prior to 2020. There’s some quality here among the quantity as Rod Woodson and his staff continued the theme of acquiring experienced players.

One of two teams to snag a punter in the first round of the Specialists Phase, Vegas went with Michael Carrizosa, who ranked second in the USFL in net punting average this spring. Next was kicker Bailey Giffen from Lamar, who can also punt. Finally they went long snapper with Tulsa’s Adam Higuera. Higuera made Phil Steele’s Preseason All-American fourth-team as long-snapper in 2020 and 2021. All three attended the Specialists Showcase last month.

In the Open Phase, Vegas grabbed some great names, including Mustaqeem Williams, Cinque Sweeting, and Cassanova McKinzy. If they can play up to the level of their monikers, they’ll do just fine. Vegas may have been the only team to take an actual, real-life fullback in Rod Smith. Paired with the Lovett choice, expect a physical run game under the yet-to-be-named offensive coordinator.

Vegas was one of two teams to pass on selecting an additional quarterback. They’ll head into the supplemental draft early next year with Luis Perez and Jalan McClendon at the position.

Best Pick: On the game broadcast, Will Adams was said to have “wowed” scouts during HBCU Legacy Bowl practices. Despite being an 8th round pick of the Defensive Backs Phase, expect him to push for a starting job right away.

Questionable Pick: Keylon Kennedy is a curious choice as the first pick in the same phase. His commitment to Jackson State in November last year, then West Florida in February while ending up playing for neither, raises some flags. Hopefully Vegas did the proper vetting on Kennedy – he obviously showed out well recently at the NFL Alumni Academy.

Small School Stud: DL Jah’Sheem Martin comes from Pace University, a Division II college in the Northeast-10 Conference. Martin attended the D.C. Showcase this summer after participating in The Spring League in 2021.

Strongest Position Group: If the veteran linebackers show up and are in shape, it’s going to be tough sledding for opponents in the middle of the field.

Weakest Position Group: Even if defensive coordinator Cris Dishman ends up running a 3-4 defense, they’re going to need some more bodies at the defensive line position, particularly at end.

Key Connection: Despite not crossing over during their time in Pittsburgh, as a Steelers legend, you have to imagine Rod Woodson still has eyes and ears in that building. Relying on those connections may have helped him make the decision to draft former Steelers WR Martavis Bryant.

Vegas Director of Player Personnel Joey Clinkscales held the same position with Los Angeles in 2020. He called upon that time to bring in two former Wildcats, WR Saeed Blacknall and DT Roderick Henderson.