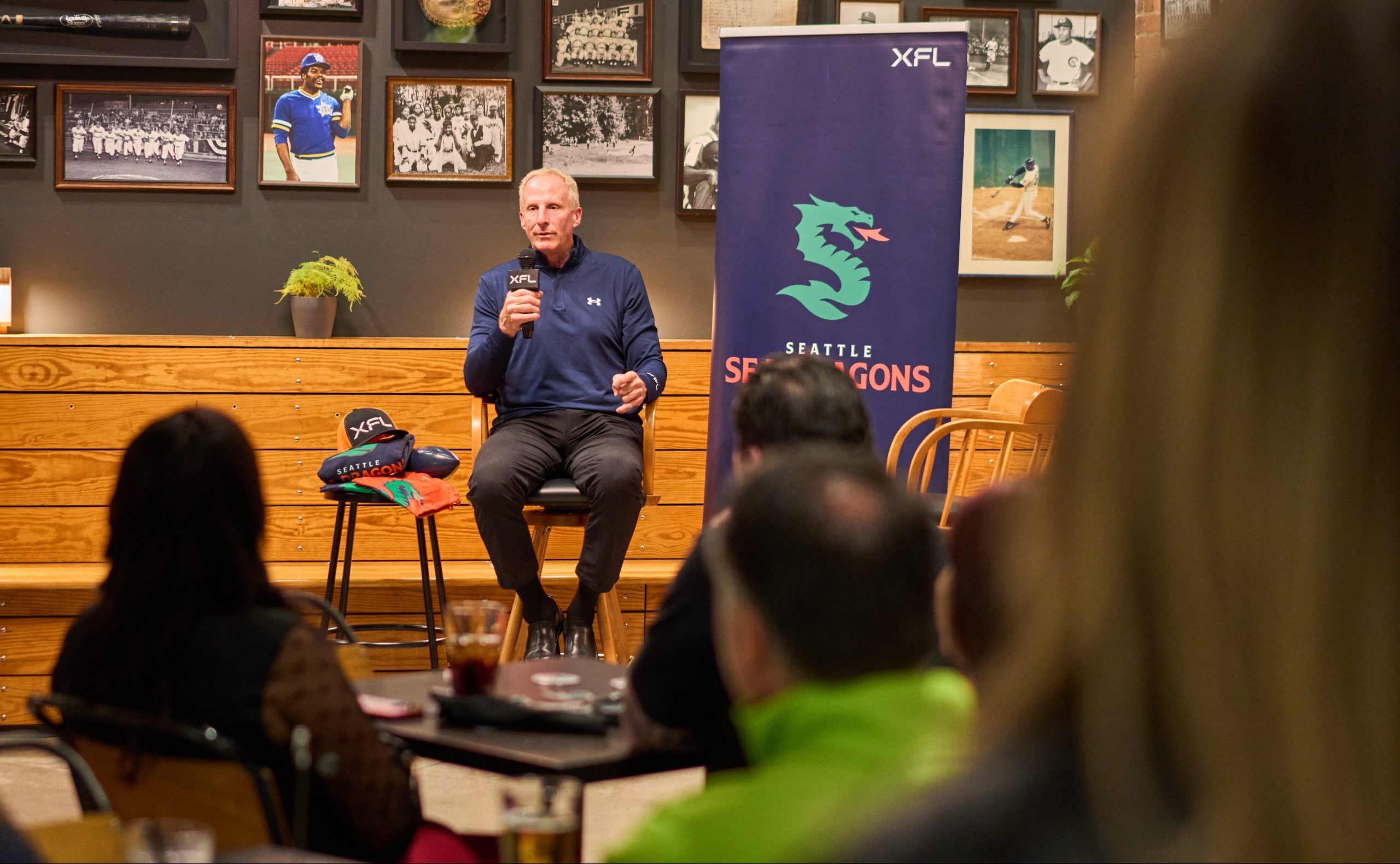 With three months to go before games begin, the XFL has finally reached out to fans in its home cities with Town Hall events. Those events have taken place in seven of the eight team cities over the last few weeks, with only Vegas to go; their event is scheduled for November 15. Invitations were originally sent out to season ticket deposit holders in October, but the league’s official stance is that Hurricane Ian caused postponement of what they referred to as “local activation” events.

I’ve been critical of the league’s lack of marketing in these cities up to this point. The Town Hall events seemed a nice idea to kick off what hopefully will be a marketing blitz in those areas leading up to the first week of games on February 18. I reached out to folks who attended these Town Halls to not only get a report about what went on, but also to take the temperature of fans to see how receptive they were to the teams and league.

What became clear is that each event followed a similar pattern: The head coach was the guest of honor, usually accompanied by members of team operations or league personnel. Fans could write questions on note cards for the head coach, then after dining for a bit, the coach would answer select questions from the note cards. There was often a meet-and-greet as the coach made the rounds, chatting and taking pictures with fans. Each event fit into a two-hour window.

Arlington, Orlando, and St. Louis all held their events on November 1. One fan who attended the St. Louis Town Hall at Bally Sports Live! estimated the attendance to be in the range of 80-100 people. Michelle Beisner-Buck, who works for ESPN and is the wife of Monday Night Football play-by-play announcer Joe Buck, hosted the event. St. Louis communications director Brian Stull, who held the same position with the team in 2020, appeared to be in charge. XFL President Russ Brandon made the trip to take questions alongside Head Coach Anthony Becht.

Topics discussed included expectations each had for the league moving forward and the obvious decision to bring St. Louis back into the fold after the success the team had in 2020. Becht revealed that he wanted to make connections with former St. Louis Rams and bring them into the BattleHawks orbit. He mentioned wanting to be a positive influence on the city and his desire to be a part of the league when it was announced.

“I didn’t know what to expect at all, however, I definitely had a good time,” the fan told me. He related the story of a father telling Becht and Brandon that he’ll finally be able to take his child to a football game now that the BattleHawks are back, of which a video made its way onto the BattleHawks’ Twitter page.

Orlando held its Town Hall at TopGolf in the city. Reports I received from two fans who went to the event had the attendance anywhere between 50-100 people. There were others from the Guardians staff at the meet-and-greet, including Cayla Koslow of team marketing and content, as well as Corey Helvey, the director of ticket sales, who worked for the Tampa Bay Vipers in 2020. After the requisite Q&A with Head Coach Terrell Buckley, there were some raffles and giveaways for fans (and of course, some golfing). It was also an opportunity for Buckley to chat with some local media present at the gathering.

Of Buckley’s comments, the most striking to those I talked to were the plans for fan interaction and events on game day at the stadium and the desire to be kid-friendly. He also mentioned, when asked about the long-term viability of the league, that the XFL was in good hands and everything was done “first class.” With the draft coming up, Buckley told the Guardians faithful that he was looking for players who were “smart, fast and fearless.”

The event left a positive impression on both fans who volunteered to discuss their experience for this story. “I’ve been excited for the XFL’s return,” Kara told me. “My husband couldn’t make the event so a friend of mine went with me. She had no idea about the league, the team, etc…she was excited for the prospect of having an affordable, family-friendly entertainment option in Orlando…she’s very interested in attending a game here with her husband and child now that she knows about the team.”

Paul Jackson, another attendee, shared similar feelings upon completion of the Town Hall. “It left a good impression with me,” he said. “It seems like the league is in competent hands and coach Buckley knows what he’s doing.”

Two days later, D.C. had its event with Head Coach Reggie Barlow, also at a TopGolf. There was another the next day as well, advertised on the team’s Twitter. San Antonio was also up on the third. I heard from three fans who went to that one. All estimated the crowd at over 100 people, with one guessing as many as 150. Head Coach Hines Ward and Director of Team Operations Jose Jefferson were the most visible Brahmas there. One fan noted the presence of Alamodome representatives. The team recruited two local radio hosts to emcee the event and to no doubt get some added local press.

During the portion where Ward spoke, topics included his desire to build both a fan base and coaching philosophy like he experienced with the Pittsburgh Steelers. He noted admiration for the work of the head coach at the University of Texas-San Antonio and said he has his eye on a few local products for the Brahmas. While Ward will oversee all aspects of the team, he indicated he’d leave much of the defense up to his coordinator, Jim Herrmann. In preparation for the draft, he said he and his staff were meeting every two days to work on their draft board. Ward regaled the audience with stories from his time with the Steelers and in the AAF. His key phrase for the Brahmas: “Rise together, rock forever.” Ward closed the event by taking pictures and signing autographs for all who wanted one.

As for the experience, Joshua Mair noted it was “definitely positive. He (Ward) wants San Antonio to build a community and wants the fans and team to interact as much as possible and win a championship.” Darrell Johnson added that the event “was good, fun, interactive, felt like a family gathering from friends from the Facebook group meeting up and XFL folks being nice and making everyone feel comfortable.” Fans in San Antonio are already beginning to gel as one: Johnson noted that there is a fan fest on December 10 that fans are putting together via the aforementioned Facebook group “San Antonio Brahmas XFL fans.”

Lee Bolton also enjoyed the show, even if it was a lengthy wait for something like this to take place. “It was a good event and a long time coming,” he said. “I didn’t see an unhappy fan in the house. Most of us were feeding off of each other’s energy…a few of us recognized/reunited with our fellow refugees from our days as fans of the AAF Commanders.”

Houston was in the spotlight on November 8 with Head Coach Wade Phillips and others. Cullen Watkins pegged the number of people there at 25-30, though they all seemed to be die-hards with the majority clad in Roughnecks merchandise. Unlike at other Town Halls, Watkins noted nearly the entire coaching staff was present, including both offensive and defensive coordinators. Other team staff were represented along with the coaches, who had an opportunity to introduce themselves during the Q&A portion.

One key takeaway: Phillips advised that many if not all the league rules of 2020 would be back in place for 2023. He also said the team would be running the same offense as they did in 2020 under June Jones, this time with AJ Smith at the helm. Phillips said the defense would be focused on stopping the run and getting into the backfield. The event amped up Watkins for the league’s February kickoff. “Definitely left the event with an even more positive view of both the Roughnecks and the XFL as a whole.”

The most recent showing was in Seattle this past Wednesday evening. Reid Johnson of The Markcast shared some notes from the affair. He figured about 45 fans were there to hear Head Coach Jim Haslett speak. The Director of Team Operations Pat Mathews was also there, along with some of the team’s social media reps. Haslett spoke with the host in front of fans for about 30 minutes, then did the usual Q&A and had a raffle (giveaways included a signed poster by the coach and t-shirts). Like Phillips a day before, Haslett noted most of the rules from 2020 would return and any changes wouldn’t be all that noticeable to fans.

Haslett said he would leave the offense up to coordinator June Jones and focus much of his energy on the defense, which is his background. There seemed to be a lack of understanding that the team would be practicing in Arlington during the season. That was one negative Kara’s friend in Orlando brought up as well. The Seattle Times covered the event, as did two local news crews. “I think the league seems well run…overall any fan that attended should have had a good time. Better than the first XFL 2020 event by far,” was how Johnson summed things up.

All of this is not to say these events went off without a hitch. There was confusion when the initial invitations were sent out; some cities seemed to be by invitation only (Vegas, Arlington, San Antonio were not advertised on team Twitter feeds) while others were open to the public, subject to capacity. Some indicated Huddle members were invited, others just season ticket deposit holders. Then some season ticket depositors, like one who contacted me from Arlington, didn’t get an invite nor a response from the XFL when he reached out via Twitter DM. “Getting anyone from the league office to respond to an email or DM has been very disappointing and difficult,” he said. Combine all of that with the postponement of the initial events in October with the Hurricane Ian excuse that some fans took as a cover for a hiccup of some sort on the XFL’s end, and it’s enough to raise questions about the league’s ability to communicate with its fan base.

The bottom line, however, is that fans are starved for the attention the league and teams are finally giving them. There were few, if any, true complaints from fans I spoke with about their experience at these Town Halls. The more the XFL can string together local successes like this, the more butts will be in the seats and eyeballs will be on games come February. The XFL needs to cultivate fans in these cities in order for it to have any lasting power. These events were a good first step toward that end.