XFL: The path into the NFL for kickers like Matthew McCrane

With NY Guardians Kicker Matthew McCrane signing with the Cleveland Browns, will it open the door for more of the XFL’s top specialists? 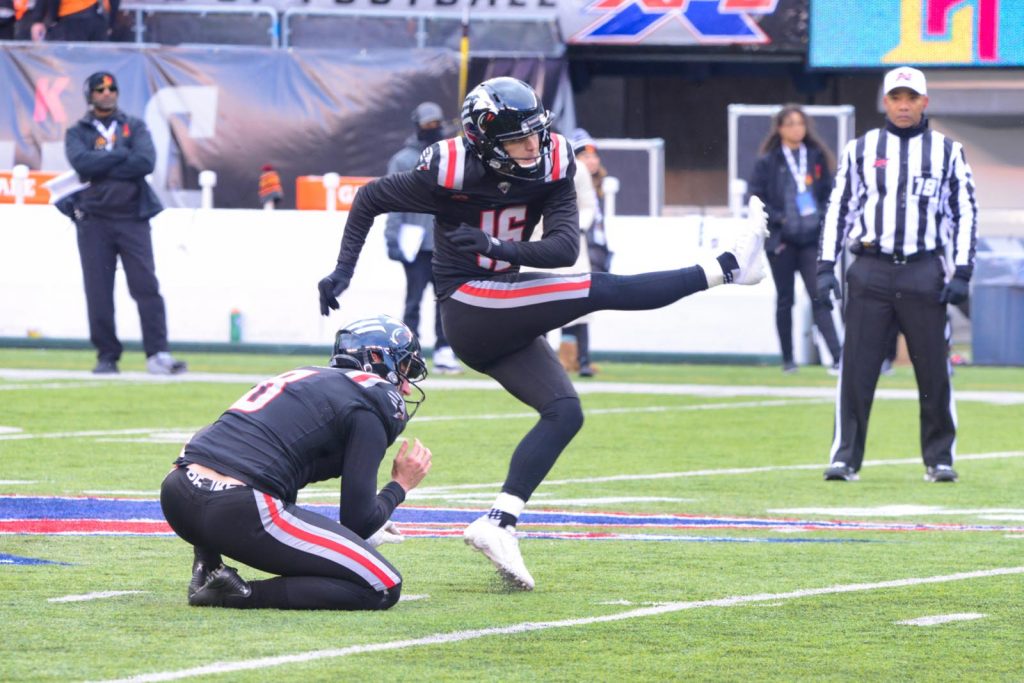 The very first points scored by an XFL player in the NFL could come from a kicker. Matthew McCrane could be the player who holds that distinction. Early last week, McCrane signed onto the Cleveland Browns practice squad. With the volatility of the position, McCrane could be taking over placekicking duties for Cleveland.

In the XFL, Matthew McCrane stood out, kicking outdoors in February and March. McCrane was a perfect 8/8 on field goals, with a long of 53 yards. The knock-on McCrane in the past was his size (5’9 165), but in the XFL, he showed plenty of leg strength in the elements. Something that I am sure Cleveland Browns scouts noticed. 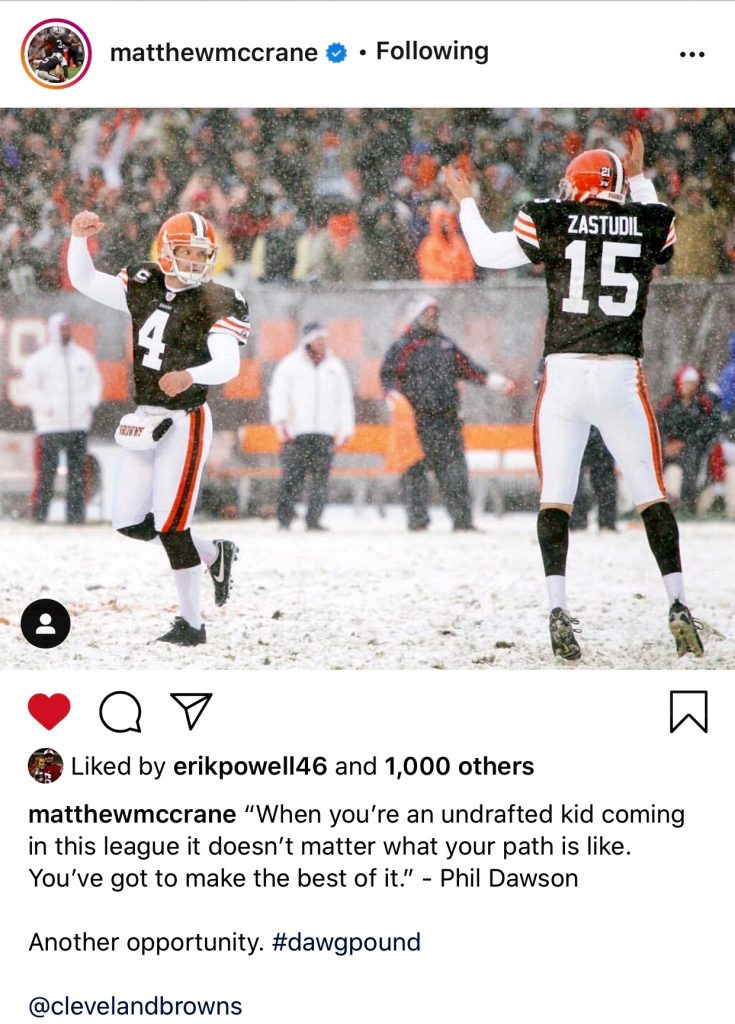 MATTHEW MCRANE’S JOURNEY INTO THE NFL

Matthew McCrane has had a unique journey. The Brownwood, Texas native had dreams of kicking in his home state, but he ended up as an All-Big 12 kicker at Kansas State. From 2014–2017, he connected on 133-of-134 extra point attempts and 57-of-66 field goal attempts. McCrane ranks second in Big XII history and #7 in NCAA history for Career Field Goal Percentage (86.4%).

In 2018, McCrane entered the NFL Draft with the hopes that some team would select him. And like most draft hopefuls, McCrane had assurances from franchises that they would choose him. The Minnesota Vikings expressed interest in McCrane but instead drafted current Raiders kicker Daniel Carlson. The life of a kicker has its fair share of twists and turns, and Carlson and McCrane would cross paths again.

When you’re an undrafted kid coming into this league it doesn’t matter what your path is like. You’ve got to make the best of it- All-Pro Kicker Phil Dawson

McCrane wound up signing with the Arizona Cardinals as an undrafted free agent. His competition in training camp was one of McCrane’s idols, veteran kicker Phil Dawson. The former Pro Bowl kicker for the Cleveland Browns, Dawson, was also from Texas. Ultimately, McCrane would lose the kicking battle to the veteran and be released before the 2018 season started.

Three weeks after failing to make the Cardinals roster, McCrane would sign with the Oakland Raiders. On September 30, 2018, against the Cleveland Browns, McCrane converted three of five field-goal attempts and four extra points. He kicked the game-winning field goal for the Raiders in his NFL debut.

One month later, McCrane lost his job with the Raiders after the team signs Daniel Carlson off waivers from the Vikings. The same kicker drafted by Minnesota instead of McCrane had swooped in to take his spot.

BACK TO SQUARE ONE

The Cardinals brought back Matthew McCrane and sign him to their practice squad. The stay was short-lived. Nearly a month later, in November, Phil Dawson suffered a career-ending hip injury. McCrane went back to the Cards, and this time, he is Dawson’s replacement on the active roster.

One day later, McCrane handled the kicking duties in the Cardinals’ 23-21 loss to the team who cut him the month prior, the Raiders. McCrane converts all three of his extra points, but on the next day, he’s released and replaced by current Cardinals kicker Zane Gonzalez.

McCrane’s rookie season would not end there. On December 28, 2018, the Pittsburgh Steelers signed McCrane after placekicker Chris Boswell was injured. In the Steelers’ last game of the regular season, McCrane made all three of his field-goal attempts in a 16-13 victory over the Cincinnati Bengals. The Steelers cut McCrane in May of 2019.

DETOUR INTO THE XFL

Welcome to the life of an aspiring NFL kicker. In one year, after four stints with three different teams, Matthew McCrane found himself out of the NFL.

Six months after being let go by Pittsburgh, with NFL franchises bypassing him entirely for the 2019 season, the New York Guardians drafted Matthew McCrane in the 2020 XFL Supplemental Draft on November 22, 2019.

McCrane exceled in New York for the Guardians, but the XFL season was cut short due to the pandemic, and after the NFL loosens the restriction on free agent workouts, McCrane received a tryout with the Browns in August and is now on their practice squad. McCrane is back to square one and hoping to get another shot to kick in an NFL game.

At no position do NFL teams roll the dice on game days more than at placekicker. When you think about it, specialists are the one area on an NFL team with no backups. Franchises cross their fingers that no injuries occur on game day to kickers, punters, or long snappers.

Of course, teams do have contingency plans in place if a player goes down.  Typically, there is someone designated to long snap if an injury occurs in-game. Most teams will adjust if their punter goes down by having their kicker assume those duties.

However, when a kicker gets injured, with no backup, it drastically alters an offense’s gameplan. In this scenario, teams will forgo extra points for two-point conversion attempts, or go for it on 4th down instead of taking a makeable three points.

NFL roster management is difficult for a coaching staff. Particularly on game days when you can only dress a certain amount of players. So special teams get the short end of the stick, however, with the new roster rules and expanded practice squads some NFL teams are using the new regulations to carry more than one kicker on a roster.

All totaled, there are 11 kickers on NFL practice squads. The expansion of practice squads to 16 has helped kickers land jobs. The pandemic has also played a factor in this. The NFL had its first mini-outbreak with three Tennessee Titans players testing positive for COVID-19.

One of the ideas behind having an in-house kicker is as insurance for the possibility of a placekicker contracting the virus leading into a game. Because the process for trying out and testing is so time-consuming, having someone already on the roster ready to go has become necessary for NFL teams.

Another reason for having a kicker on the practice squad is as extra motivation for the kicker on their active roster. It sounds harsh, but the reality for all kickers is that you are only as good as your last kick. If a team is unsure about you, having a kicker in reserve is their backup replacement plan.

While there are undoubtedly many hurdles for free agent specialists, NFL teams placing kickers on their practice squads could open the door for some of the XFL’s top players at the position. This would be welcome news for kickers like Austin MacGinnis (Renegades), Taylor Russolino (BattleHawks), Ty Rausa (Defenders), Sergio Castillo (Roughnecks), Ernesto Lacayo (Dragons), Giorgio Tavecchio (Wildcats),  and Andrew Franks (Vipers).

Players like Russolino and MacGinnis were standouts in the XFL. Taylor Russolino was 9/10 with a long of 58 yards for St. Louis. MacGinnis spent time this summer with the Los Angeles Rams. In Dallas, he was a perfect 10-10 on field-goal tries. Both players and others got much needed pro in-game experience in the XFL, and they proved themselves. Kickers like them are out there looking for that same opportunity in the NFL.

There are no guarantees with Matthew McCrane in Cleveland, but if by some chance he proves his worth during games with the Browns, McCrane will pave the way for other XFL kickers to get their foot in the door.