The XFL supplemental draft is only 2 days away, XFL Training Camp is 45 days away, and the XFL will kickoff its first season 80 days from now!

We are halfway there and everything is beginning to feel so surreal.

Players who have been drafted, and who will participate in the supplemental draft have been preparing for the upcoming season and you can feel the enthusiasm.

Like Foster Reznor,  5’11 185 lb defensive back out of Gannon University, who plays with so much energy and enthusiasm. From watching his film I know he plans to bring that aspect of his game to the XFL.

Since he was a child, he has dreamt of the opportunity to play football professionally. “I have always had the dream of playing football at the highest level since I was young kid,” said Reznor. “Growing up I fell in love with the game and dedicated a lot of time to it.”

Reznor had a stellar high school career splitting time at running back and defensive back racking up the accolades. He received all-state honors as an offensive specialist, and was a three time all region first team selection as a running back and defensive back. He accumulated 4,804 all purpose yards and 54 touchdowns on offense along with 128 tackles and 11 interceptions on defense.

“My coaches put me at corner in high school and it was over from there. I loved following the other team’s best receiver and competing.”

He may have been really good at running back and wide receiver, but defensive back is his true calling.

Reznor mentioned Tyrann Mathieu and Mike Hilton as who he models his game after. “Both players have the innate ability to create turnovers, make tackles in open space, and are very good at disguising coverages, which are all attributes you need to have to be an elite defensive back,” said Reznor. “Both guys are very similar to me in size and always find ways to be around the football.”

Along with being a very competitive player, his “team first” mindset is something he believes will separate him from the other XFL hopefuls. “I love seeing my teammates succeed. I am somebody that tries to bring the best out in everyone, whether that is on the football field or outside of football.”

Competitiveness and continuity within a locker room can certainly help mold the identity of a football team.

At first, Reznor admits he wasn’t sure if his dream was realistic, but following his senior season at Gannon Reznor received an opportunity to showcase his skills.

“I was unsure of how realistic it could be, but during my collegiate career I realized that it was more than possible. After my senior year I participated in multiple pro-days where I tested well and received a lot of recognition,” Reznor said “It was really cool seeing how well I tested in comparison to other athletes that were being considered in the NFL Draft.”

Reznor believes the XFL is an opportunity of a lifetime, and had a similar response to many of the players who have either been drafted or expect to be drafted this upcoming Friday.

“The XFL is a league that is going to be successful,” said Reznor. “They have some of the top coaches and players in the country that are a part of this league. This an opportunity to compete with some of the best athletes in the country.”

Reznor doesn’t have an ideal landing spot but wants all eight XFL teams to know one thing. “Which ever team takes a chance on me is a place where I want to be. The team that selects me is going to get the best version of me. I’m going to do the right things on and off the football field and I will be a player that competes every day and will not take the opportunity for granted.”

Reznor in my opinion can bring several attributes to your football team, but what I like most about Foster are the intangibles he provides. Not only is he talented but he also has a leadership mentality and would run through a wall for his team no matter the cost.

I would like to wish Foster the best of luck on Friday and I look forward to seeing you bring tenacity and enthusiasm to which ever team decides to select you in the XFL Supplemental Draft. 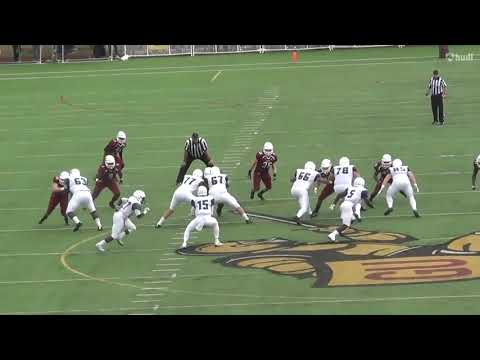