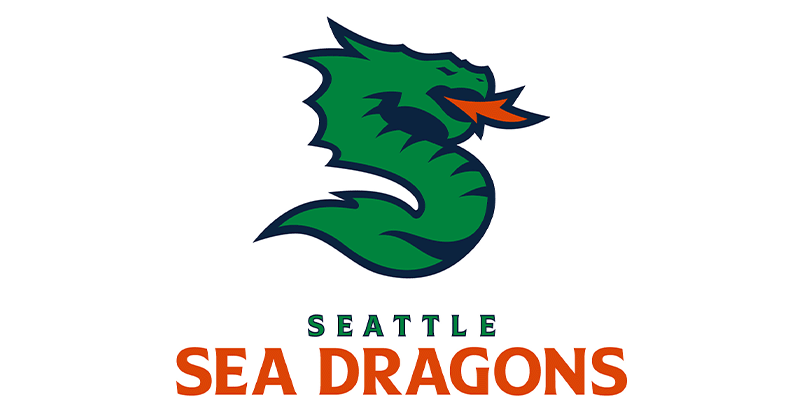 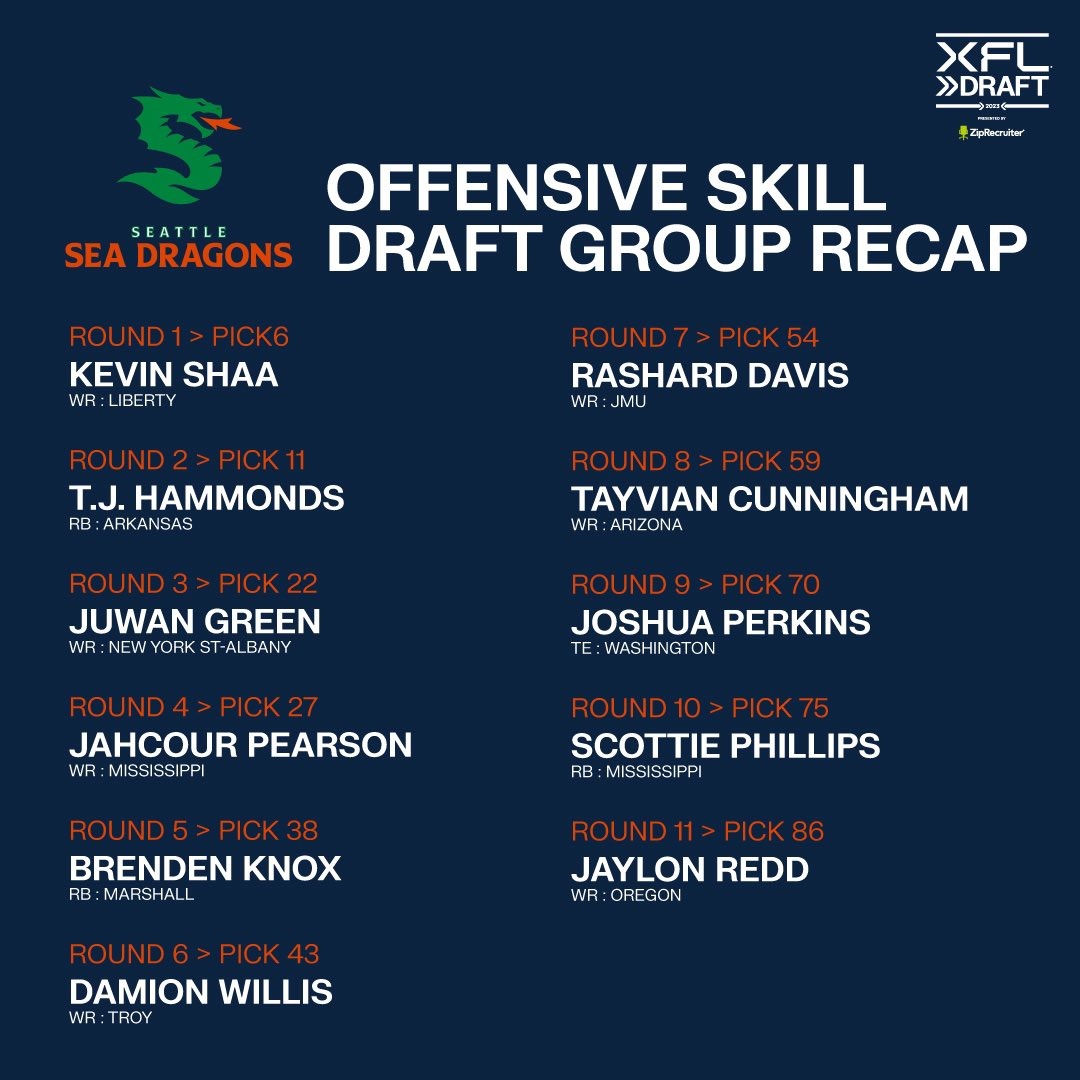 Once upon a time, WR Rashard Davis was the number one overall pick of this phase by the D.C. Defenders. However, the Tennessee Titans came calling and he never played a down in the XFL. He’ll get another shot here with the Sea Dragons. The famously allergic-to-tight-ends offensive coordinator June Jones, whose Roughnecks in 2020 drafted exactly zero players at that position, snuck in a pick for Joshua Perkins out of Washington. At 220ish pounds, Seattle may use him more as a big slot receiver than a true tight end. 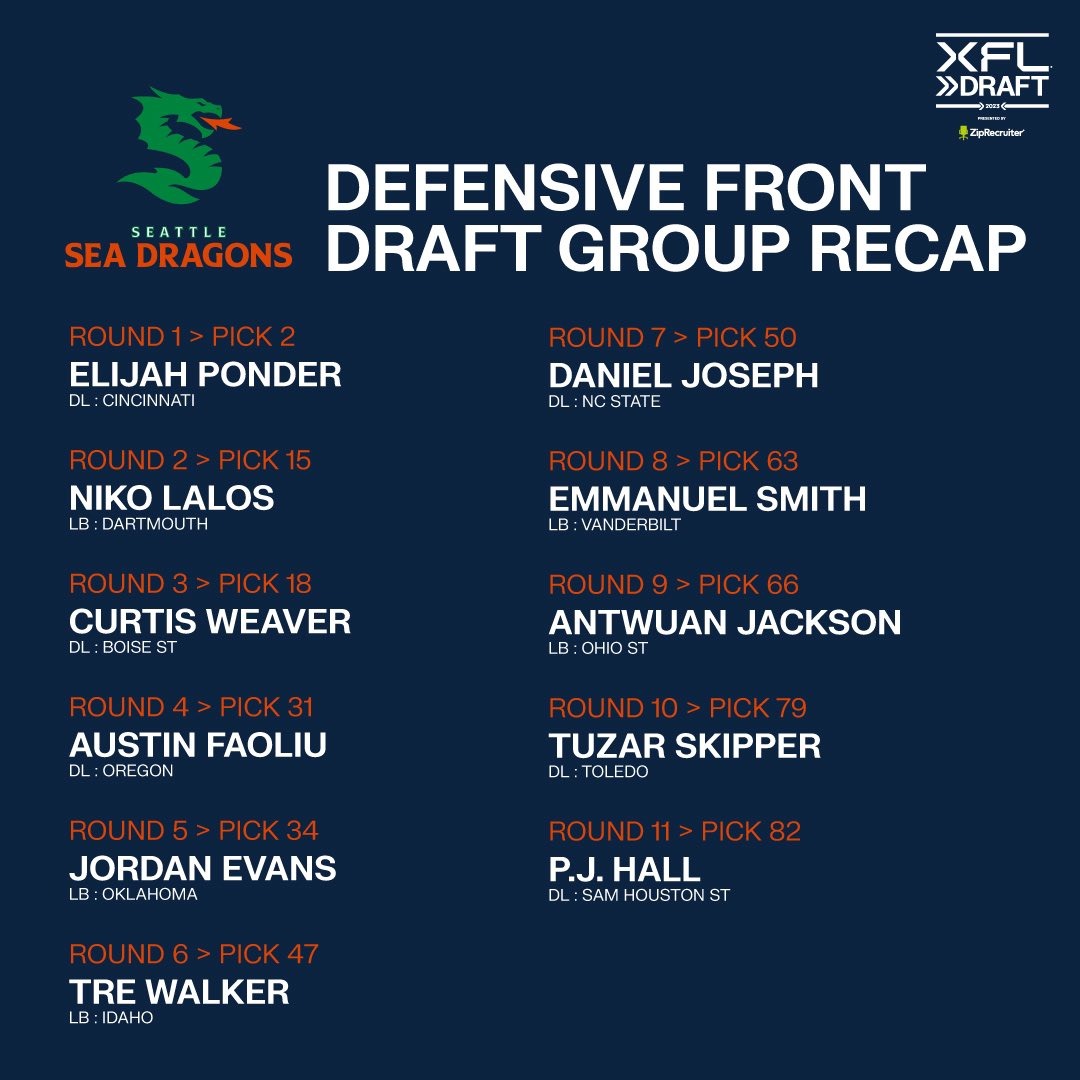 Niko Lalos is one of two Seattle draftees who have since been signed onto NFL practice squads. That speaks well of Seattle’s scouting for this draft. We’ve seen a number of players with NFL pedigrees, like PJ Hall, drop to the end of phases or to the Open Phase; you have to wonder if there are some questions about whether or not they’ll end up signing on with the XFL. If he does sign, Hall could be a steal. Seattle got a solid inside linebacker to lead the middle of their defense in Jordan Evans. Curtis Weaver, the Mountain West Conference’s career leader in sacks, will lead the pass rush. 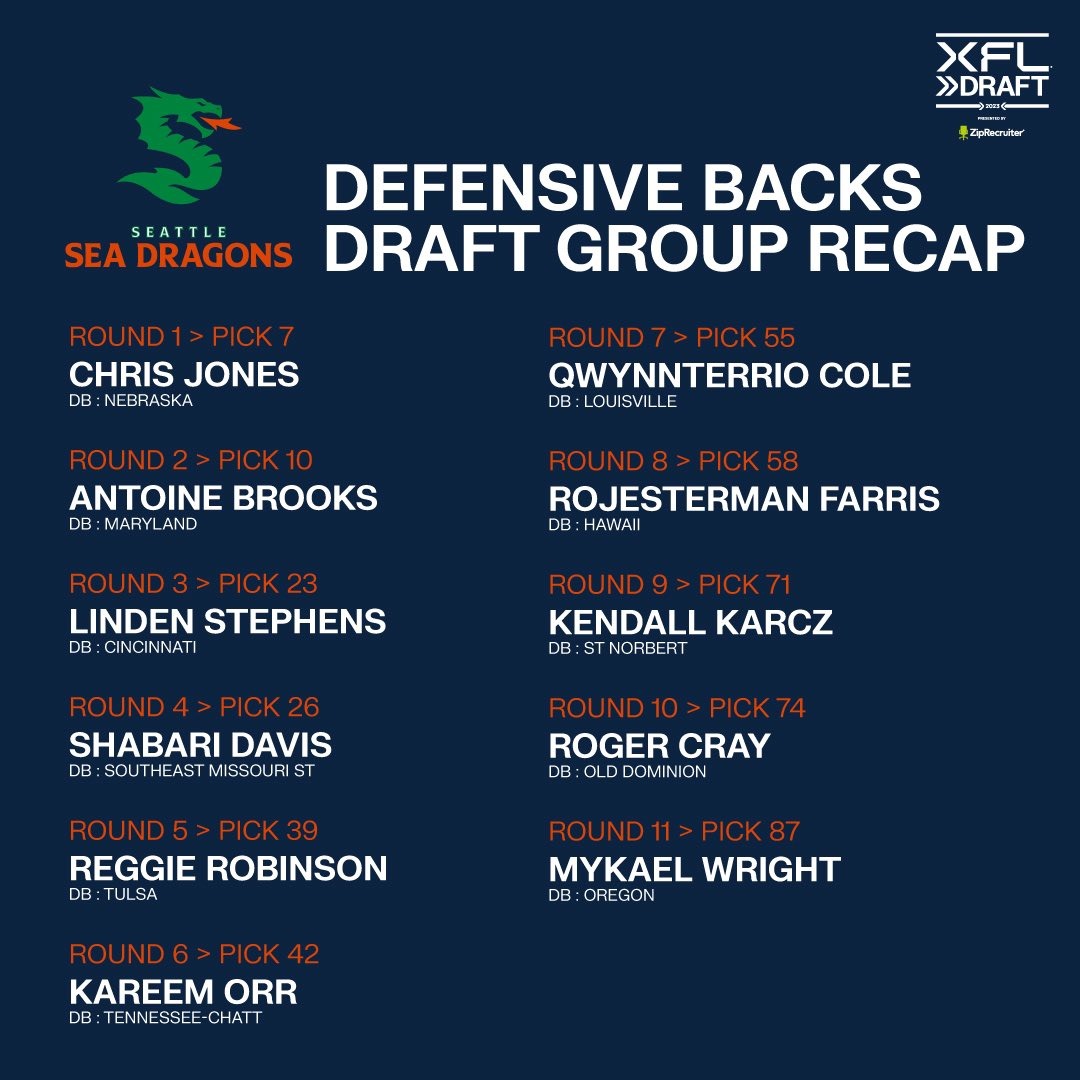 Antoine Brooks is the standout name for me here, a 2nd round safety out of Maryland. He was drafted in the 6th round by the Pittsburgh Steelers in 2020 and won a Super Bowl with the LA Rams. Mykael Wright is a candidate to return kicks, having housed two in his college career. Seattle took a few shots in the dark late on Kendall Karcz and Roger Cray. Cray will likely compete for nickel corner duties, an important position in a league that is expected to favor three-and-four receiver sets. 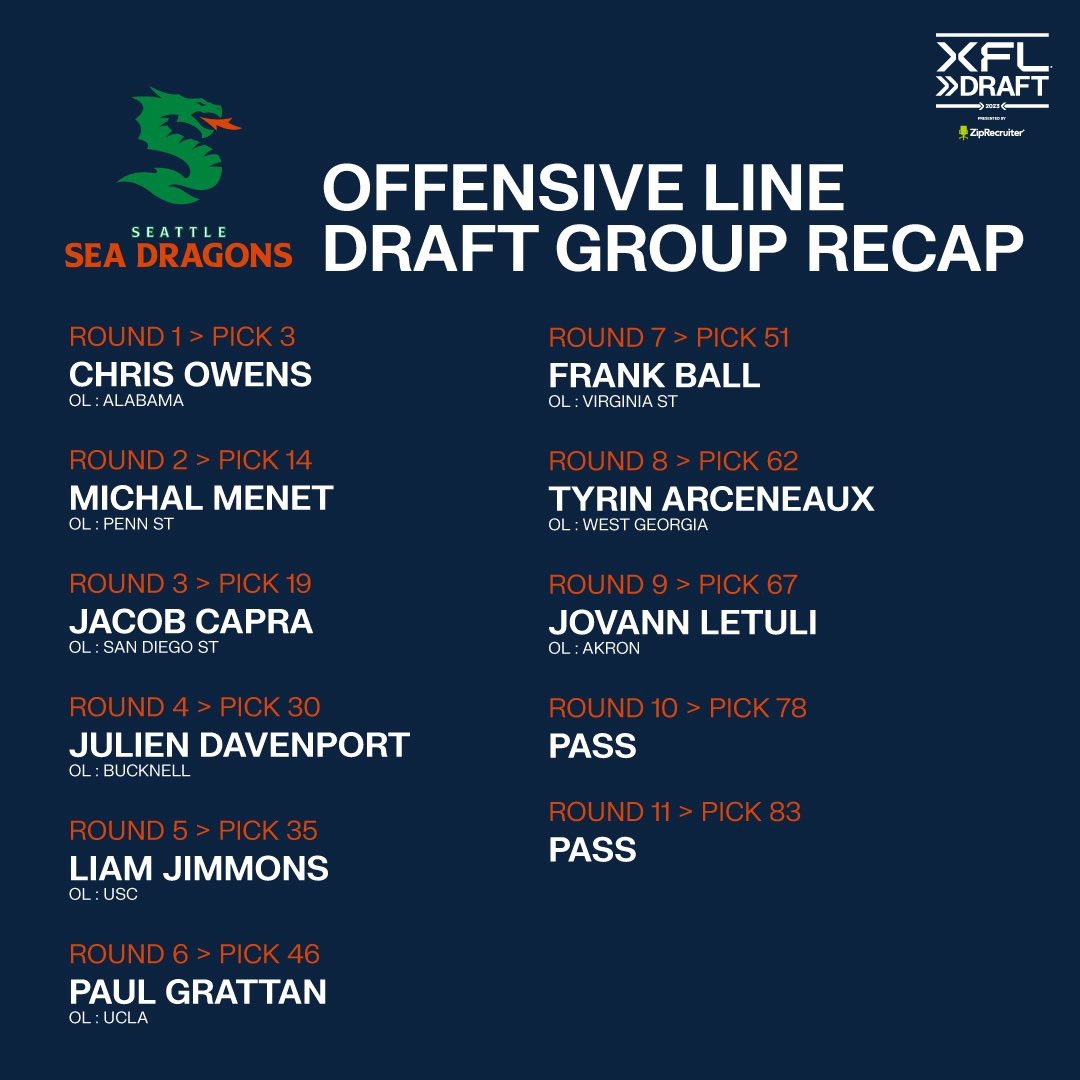 Perhaps sensing a particular weakness positionally in the draft pool, Seattle took the extraordinary step of selecting two centers with its first two picks in the Offensive Line Phase. There’s some versatility there too, as Chris Owens also started at right tackle during his time at Alabama. Michal Menet was Senior Bowl invitee and draft pick of the Arizona Cardinals in 2021. Round four selection Julien Davenport was just signed to Arizona’s practice squad. Davenport was far-and-away the most veteran of this unit; if he stays in the NFL, will the Sea Dragons seek to replace that experience in the supplemental draft?

It’s rare when a long snapper gets drafted by an NFL team – only one or two per year, though sometimes none get that distinction – and in 2021, Thomas Fletcher was one of them. He was a 6th round draft choice of the Carolina Panthers, but spent the year on IR and was cut this year. Cameron Nizialek has been making the rounds in NFL camps since 2019 and has punted in four regular season games. Brandon Ruiz earned a minicamp tryout with the Buffalo Bills this spring.

Seattle added some needed depth on the O-Line with the Josh Seltzner pick. Seltzner lasted until final cuts with the Indianapolis Colts as a rookie free-agent this summer. The Sea Dragons were one of the few teams to exhaust their Open Phase selections, choosing all 11. The addition of four defensive linemen tells you where they think a strength of this draft was. Kevin Kassis was released off the Seahawks practice squad on Tuesday, hours before the first day of the draft began. Strangely, the XFL’s own Twitter posting of the Open Phase has the Sea Dragons passing on that pick, but the Sea Dragons’ Twitter recap has them selecting Kassis.

Brian Lewerke was added to a quarterback room that also includes Steven Montez and Ben DiNucci. Lewerke didn’t improve his stock a ton as his college career at Michigan State progressed, but he’s done enough to stick on the periphery of the NFL’s radar since entering the league in 2020.

Best Pick: Kevin Kassis has been on and off the Seahawks’ practice squad a few times this year, and that could continue into the winter. If not, though, the Sea Dragons got a steal by taking an NFL practice squad-level player deep in the Open Phase. Kassis’ story is also one worth reading about, as he had been out of football for almost three years before performing well enough at Montana State’s Pro Day this spring to earn a minicamp invite with Seattle.

Questionable Pick: For the team’s first running back and second pick in the Offensive Skill Position Phase, TJ Hammonds seems like a reach. He had just one carry in 13 games as a senior, and never rushed more than 32 times in a season.

Strongest Position Group: The defensive front seven, specifically the linebackers, look stout. Tre Walker and Jordan Evans are solid on the inside, while Curtis Weaver and Tuzar Skipper are DL/OLB ‘tweeners who could play either depending on the scheme.

Weakest Position Group: I have a hard time getting excited about the wide receivers here, even if June Jones’s offense can manufacture good receivers simply based on nature of the run-and-shot offense.

Key Connection: One of the few XFL 2020 players the Sea Dragons drafted was WR Blake Jackson, who was with Houston that year. Jackson caught just five passes for 50 yards and a touchdown, but he played for Jones and Seattle Director of Player Personnel Randy Mueller with the Roughnecks.