Brock Miller, the former punter of the Seattle Dragons, may have been one of the most interesting players of the XFL. 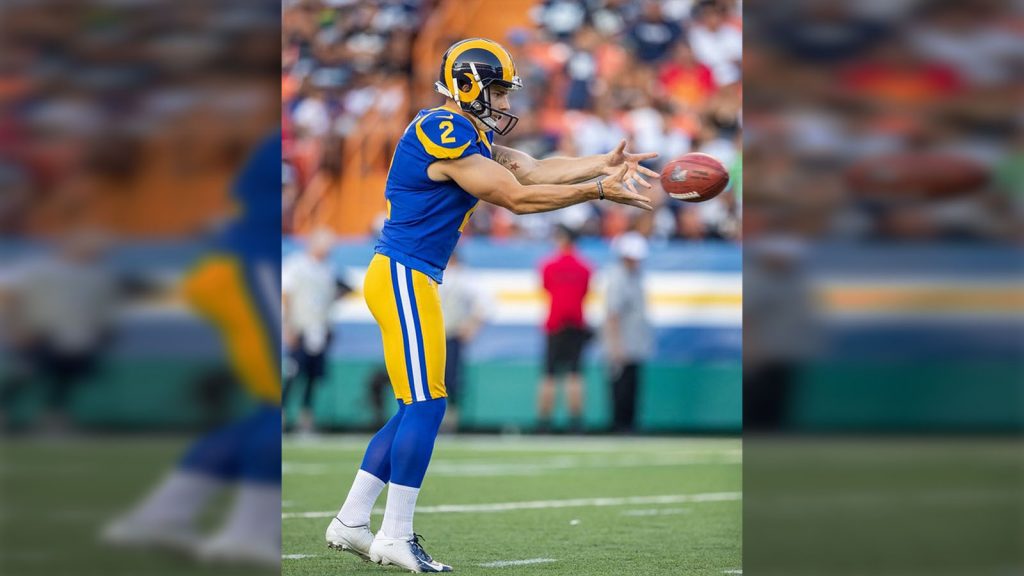 Brock Miller, the former punter of the Seattle Dragons, may have been one of the most interesting players of the XFL. Prior to the Dragons, he had played for a variety of different NFL teams in training camp or practice squads, including the 2019 preseason with the Los Angeles Rams.

Miller has been in camps with the San Francisco 49ers, Jacksonville Jaguars, Oakland Raiders, Indianapolis Colts, New Orleans Saints, Denver Broncos, and the Cleveland Browns. His practice squad time was with the New York Giants.

Time with the Rams

During his preseason tenure with the Rams, Miller looked great. He was easily one of the best, and one of the top three punters in quite a few statistics.

He averaged 47.4 yards per punt on 16 attempts, with a long of 58 yards. The lefty punter was really putting on a clinic to show why he deserved an NFL roster spot. His net is really what stuck out. Miller finished second with a 44.8 net, only behind pro bowl punter Brett Kern.

As a member of the Rams, he played beside some of the best in the NFL: punter Johnny Hekker, kicker Greg Zuerlein, and long snapper Jake McQuaide.

“I learned a lot from Hekker, Zuerlein, and McQuaide during my time with the Rams. Things like how to approach game week mentally and how to take care of your body so you can perform your best during a long season! It was a huge blessing to be around those guys for a few weeks,” Miller said.

When Miller was drafted to the XFL’s Seattle Dragons it was an awesome time for him.

On what it felt like to be selected in the XFL Draft, Miller said, “It was awesome being drafted. I wasn’t selected in the NFL draft in 2015 but getting a call from the Dragons in October last year saying that they wanted me to be their punter was an incredible feeling.  I’m still thankful to the Dragons’ staff to this day.”

He had the most punt yards, and punt attempts in the entire league. He tied Tampa Bay Vipers punter Jake Schum for the longest punt in the XFL 2020 season, which was 67 yards. Also, Miller was second in the league with the most punts inside the 20.

When asked if the XFL ball harder was harder to punt than an NFL ball, or if there was any major differences between the two, Miller responded, “The XFL ball was narrower and made from a different kind of leather than an NFL ball. So with that being said it had a smaller sweet spot. It was a great challenge using those balls in Seattle weather.”

As we saw even prior to the XFL, Century Link Field in Seattle is one of the loudest there is. The Seattle fans kept the same Seattle energy that they give the Seahawks and gave it to the Dragons. We had asked fellow Dragon, kicker Ernesto Lacayo about the noise and energy of the Dragons fans, so you know we had to ask Brock Miller, too.

Miller said, “Playing in front of the Seattle fans was an awesome experience. Probably the best fan base in the XFL and they were always rowdy at every game. Loved the energy in Century Link!”

It really seems like the Dragons special teamers loved that energy, as we are sure the whole team did as well.

Miller continues to train with the best while awaiting his next pro chance. He trains with a few former XFL special teamers such as Brian Khoury, Ernesto Lacayo, Taylor Russolino, and Marquette King.

As we can see Miller is looking ready to go at all times.

“I pride myself on the ‘stay ready so you don’t have to get ready’ mentality. I surround myself with some of the best free-agent specialists out there for training. Working with guys like Marquette King, Taylor Russolino, Tyler Rausa, Ernesto Lacayo, and Matt Wile, I am constantly pushing to be better than I was the day before,” Miller explained.

Eyes on the Prize

With all of his experience, Miller always keeps his head up and looks for the next opportunity to punt at the next level. A lot of us would love to see him come back to Seattle next season if possible, but an NFL shot is always the goal for any player.

Touching back to his training camp opportunities, Miller said, “I have a lot of NFL experience now and it’s given me a lot of confidence for the next opportunity. I know when the next call comes I’ll be able to step in at a moment’s notice and perform at the highest level possible.”

Any team that signs Miller can expect a punter that gives 100 percent every single punt, whether it be in-game, practice, or on his own at the field hitting big boots. At least a few times a week he is typically sharing punting footage of himself at the field, and he is always blasting the punts into space. Quite a few punts have a hang of around a 5.3-seconds, some even bigger, which is insane.

Miller can surely back it up. He punted extremely well for the Los Angeles Rams and the Seattle Dragons. Both of the times his number was called he showed up as one of the best punters in the league. With him, you can feel comfortable using him in a shallow punt situation, and have him pin the opponent inside the 10-yard line (or even the one-yard line.)

Hey @NFL just so you know, @Br0ckMiller can pin teams at the one yard line, perfectly! #NFL
pic.twitter.com/EIGsXu8FeW

There are not a lot of punters that can land a ball at the one-yard line that well. The XFL punt rule really helped punters hone down on their arsenal because of the massive penalties. It seems like it made Miller even more accurate than he was previously.

If it was not for the COVID restrictions on tryouts and camp invites, there is no reason why he should not be rostered. His stats are better than quite a few NFL punters, and he has shown why every single punt he takes, he never wastes a chance and always gives it all.

Could we see The Rock in an XFL game?
XFL: The path into the NFL for kickers like Matthew McCrane