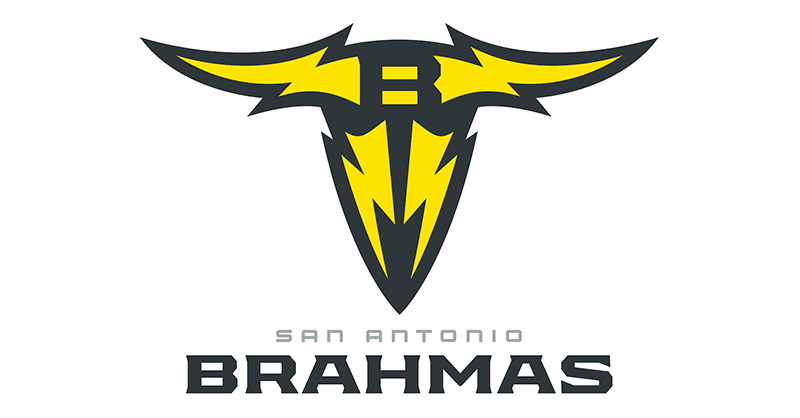 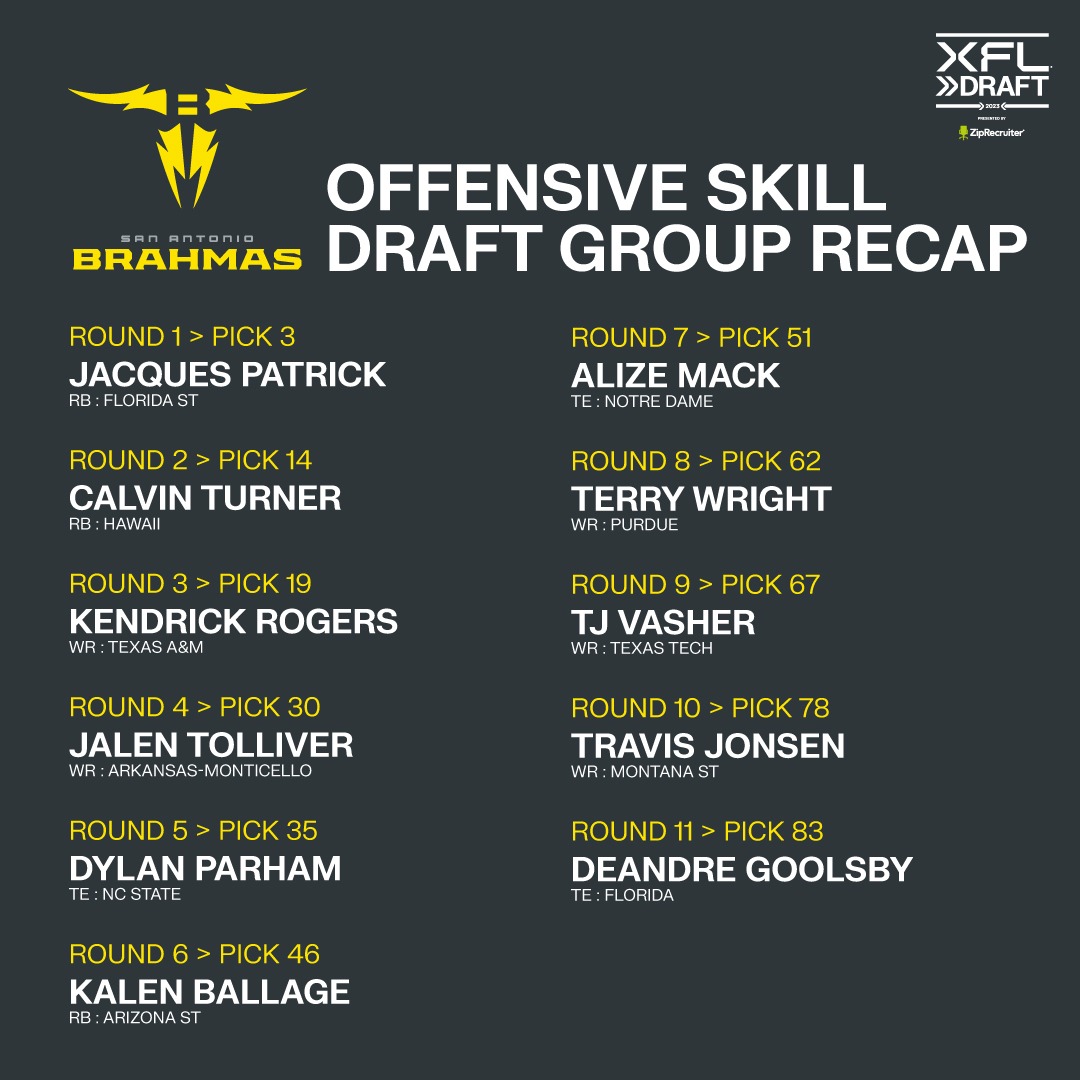 San Antonio’s choice of three running backs in this phase was not out of the ordinary, but getting them all within the first six picks was. Their first round selection, Jacques Patrick, finished third in the XFL in rushing in 2020 and has impressed in NFL preseason action with the Cincinnati Bengals. He’ll be the thunder to Calvin Turner’s lightning. Turner, San Antonio’s second pick, is a RB/WR hybrid who will challenge defenses in space. TE Alize Mack is another notable name from this list. He has bounced around the NFL since entering the league as a 7th round draft pick of the New Orleans Saints in 2019. 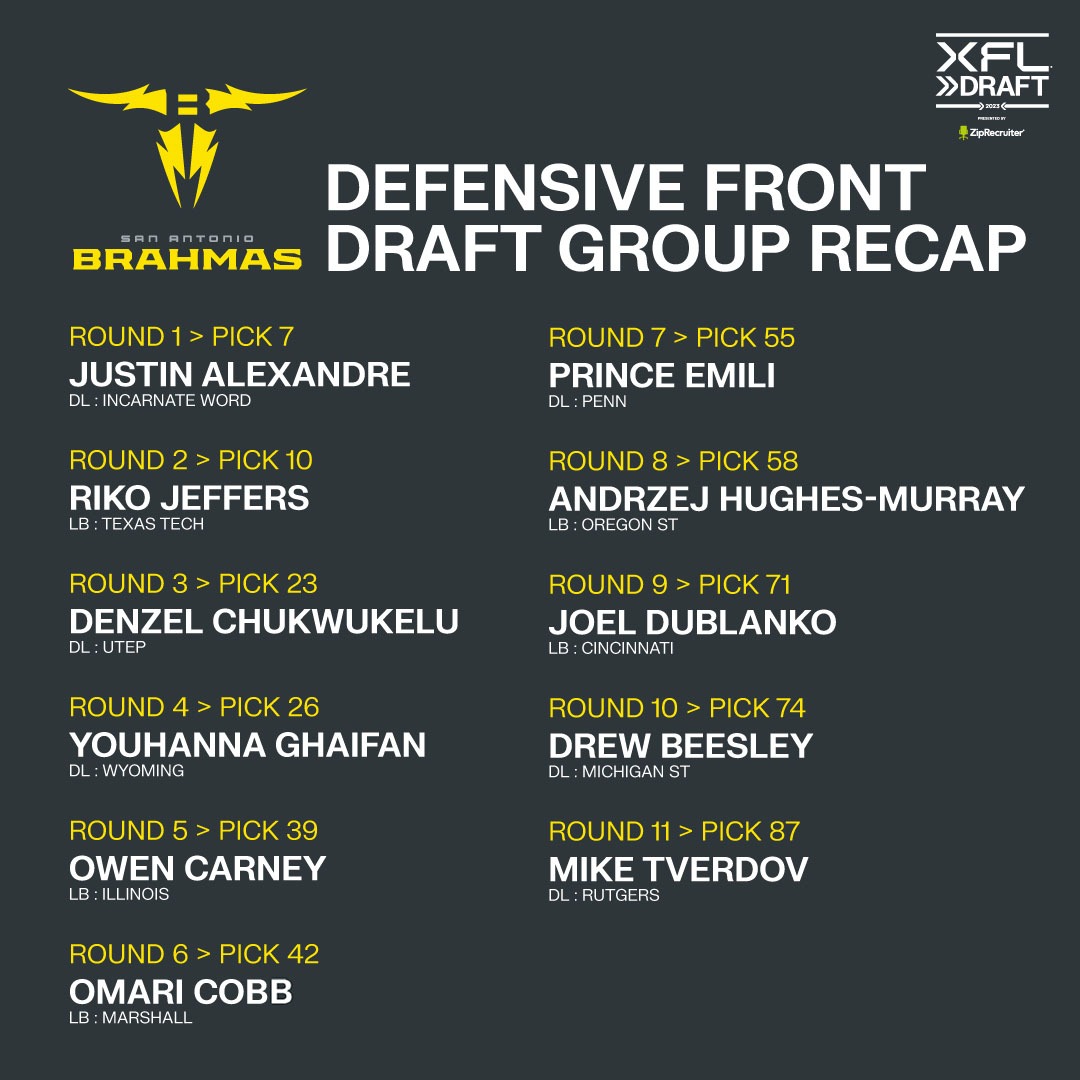 The Brahmas stayed home with their first pick, seventh overall, of the Defensive Front Phase. They chose DE Justin Alexandre out of Incarnate Word, located in San Antonio. DT Prince Emili was signed to the Saints practice squad the day he was drafted by Hines Ward and his staff. The last two picks, Drew Beesley and Mike Tverdov, will provide end depth. Both were also Academic All-Big Ten honorees. San Antonio picked up a few middle linebacker thumpers in Riko Jeffers and Joel Dublanko. 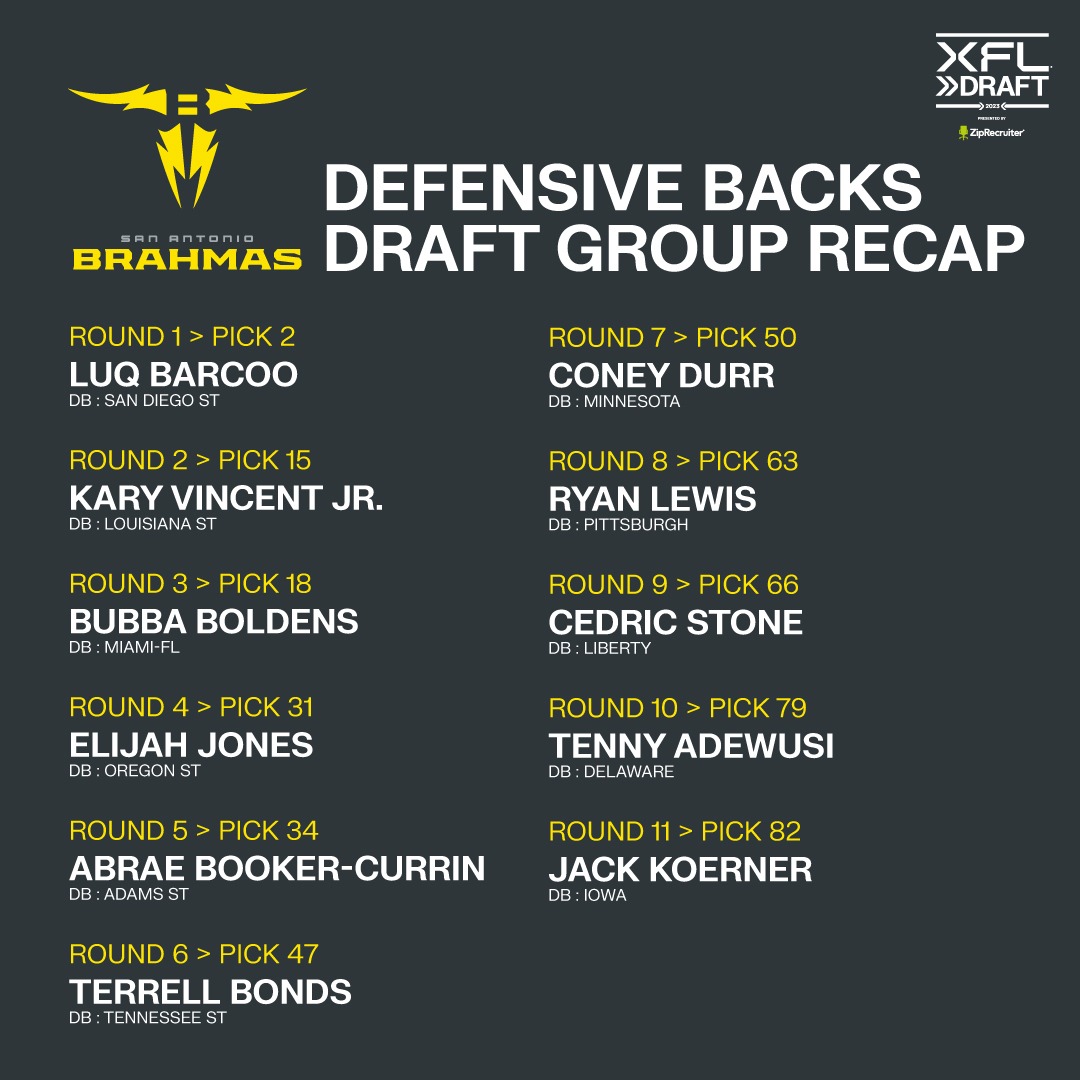 The first three DB picks were strong in Luq Barcoo (who made the Jacksonville Jaguars as an undrafted free agent in 2020), Kary Vincent Jr. (a 7th round pick of the Denver Broncos in 2021 who ran a 4.38 40-yard dash at LSU’s pro day) and S Bubba Bolden (part of a key three-way undrafted safety battle in Seattle Seahawks camp that I wrote about in August). Terrell Bonds comes to the Brahmas via the USFL where he tallied an interception with the Pittsburgh Maulers. Most if not all players taken in this phase have some level of NFL experience. 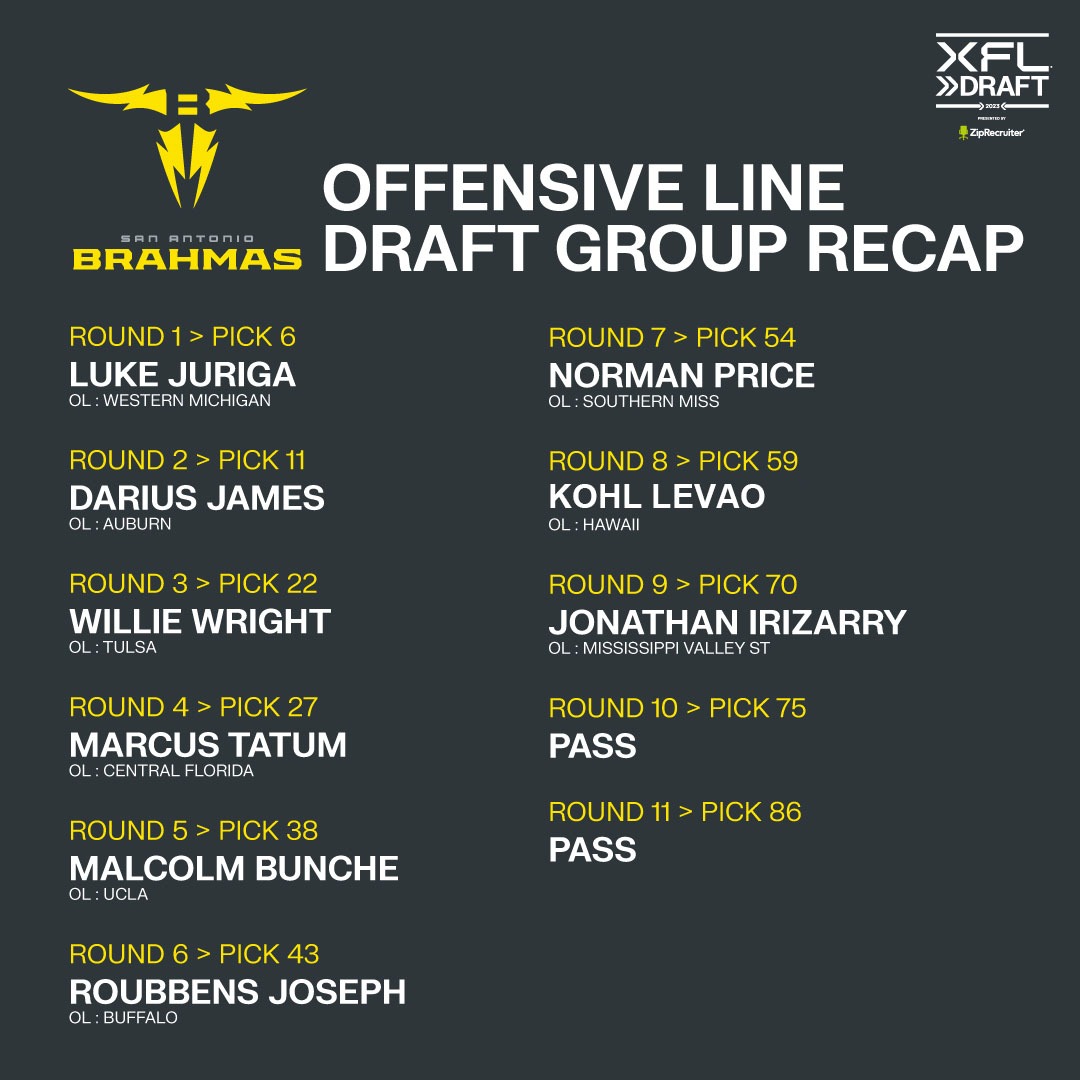 In what was a rough draft for the offensive line, San Antonio seemed to make out okay. Center Luke Juriga was a 50-plus game starter at Western Michigan and was invited to the 2020 East-West Shrine Game, one of the premiere postseason all-star games for seniors. OT Malcolm Bunche started all five games for the D.C. Defenders in 2020. Kohl Levao was San Antonio’s second Hawaii selection, a mammoth guard/center. He weighed in at 324 pounds at the Warriors’ pro day this spring after being listed on the team website at 350. Roubbens Joseph is another 320-plus pounder slated to play on the interior after spending time in the NFL, CFL, and IFL.

Brad Wing was in the 2020 XFL Draft pool but was not chosen. The Australian left-footed punter has 64 NFL games to his name. John Parker Romo was in Saints camp this summer. Long snapper Rex Sunhara frequents the NFL tryout circuit during the season. He was signed early in 2022 by the Pittsburgh Steelers to provide competition for former Dallas Renegade Christian Kuntz.

Matthew Gotel is another big player (340 pounds), likely set to play nose tackle. The team also grabbed an additional RB with NFL game time in former New York Giant Jon Hilliman. WR Dai’Jean Dixon may be the most intriguing of this group. At 6’3″ and 205 pounds, he’ll be a matchup challenge for the league’s DBs.

San Antonio was the only team to take two extra QBs on day two. Reid Sinnett and Jack Coan were added to the assigned duo of Juwon Pass and Anthony Russo. Sinnett and Coan would seem to be an upgrade on what they had, with Sinnett fresh off a practice squad stint with the Miami Dolphins last month, and Coan having learned this summer behind veteran Matt Ryan and QB guru Frank Reich with the Indianapolis Colts.

Best Pick: The Brahmas cleaned up in the Defensive Backs Phase, but in terms of value, it’s hard to beat getting CB Ryan Lewis in the 8th round. The veteran has started nine NFL games and at 28 years old, hasn’t yet aged out of the position.

Questionable Pick: Nothing stands out during the draft itself, but certainly the choice of Anthony Russo as an assigned quarterback raises eyebrows. Russo transferred to Michigan State from Temple for his final season, only to find himself playing out the season as a backup. His 44/32 TD/INT ratio at Temple doesn’t inspire a lot of confidence, either.

Small School Stud: S A’brae Booker-Currin transferred from West Texas A&M to Adams State, a D-II school located in Alamosa, Colorado, a city with a population of just 9,000 people. He participated in Colorado State-Pueblo’s pro day this year, blazing a 4.45 40. That earned him a shot in Colts minicamp in May.

Strongest Position Group: I’ve already heapred praise upon the DBs, so why not add some more? Both corner and safety positions were addressed well, then supplmented with Stephen Denmark (a 7th round pick of the Chicago Bears in 2019) and Rico Gafford (DB-turned-WR-turned-DB ran a 4.24 40 at his pro day in 2018) in the Open Phase.