John Ferguson breaks down as to which XFL teams have the most experienced backfields.

As we head into full training camps for XFL teams, I wanted to start breaking down these rosters to get a better understanding of who these players are and what kind of experience they’re bringing to the table. So, to do that, I pulled rosters from here at XFLBoard and started pulling college stats from sources like CFB Sports Reference, NFL stats from places like Pro Football Reference and FantasyData.com, and even took a look at past AAF stats. The goal here was to see which teams have the most experienced backfields. I’ll be doing this for each position, but for now, let’s just focus on RBs.

First off, let’s take a look at the college production of all RBs currently rostered filtered by most yards from scrimmage. 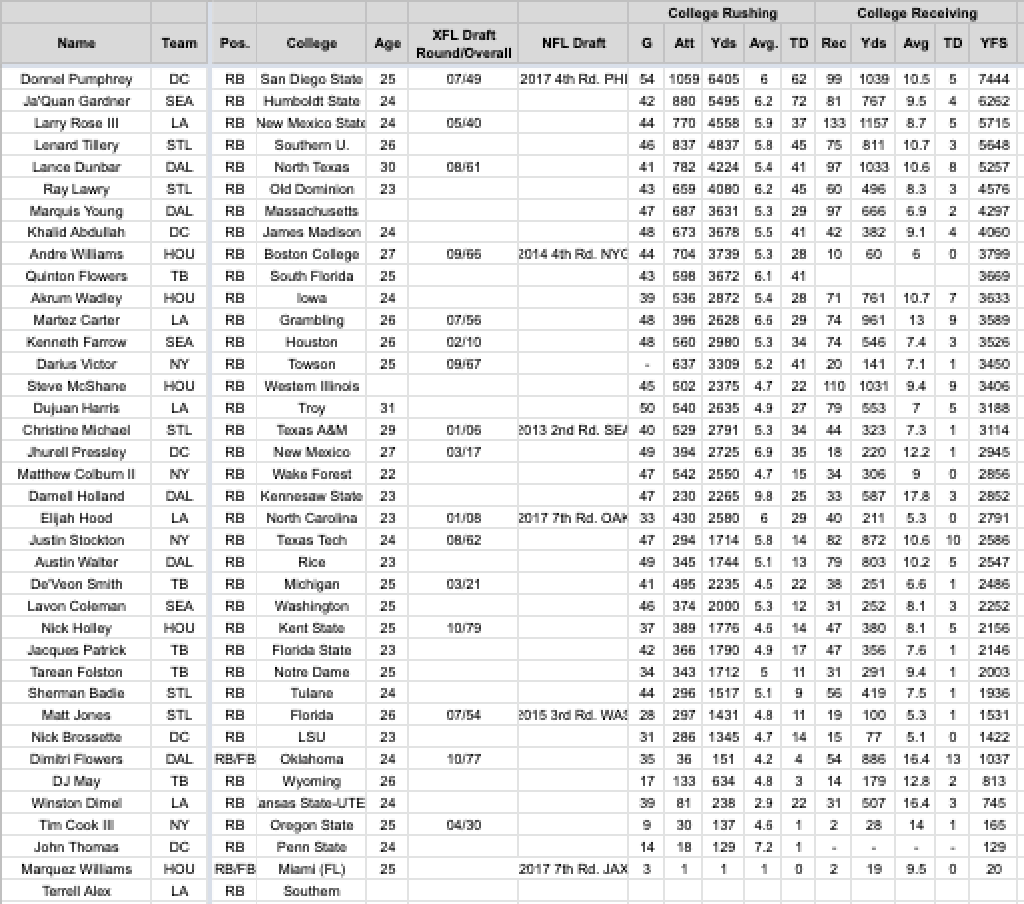 RBs and their college production filtered by most yards from scrimmage

There is a lot to digest here, but we can break it down a couple of ways. Here are some quick-hitting stats.

It’s not too surprising to see Donnel Pumphrey on top of the list for rushing production. He was 10th place in the Heisman Trophy voting back in 2016 and has the third-most rushing yards all-time in NCAA. He was drafted by the Eagles in the 4th round of the 2017 NFL Draft but never could make the jump from small-school college stud to NFL starter.

Dallas RB Darnell Holland is another guy from an even smaller school who put up an outrageous 9.8 yards per attempt at Kennesaw State which leads all active RBs on XFL rosters. He’ll have an uphill battle to earn a starting role on a Renegades team that features proven talent in former Cowboys RB Lance Dunbar. Holland ranks fourth on his own team when it comes to college rushing attempts as well, but if his efficiency can translate over to the XFL, he will definitely be a name to watch.

Seattle RB Ja’Quan Gardner put up a ridiculous 72 rushing TDs in his time at Humboldt State. AAF fans will also remember Gardner as the Maurice Jones-Drew lookalike who rumbled for the San Diego Fleet. The Dragons have the thinnest depth chart right now for RBs, but Gardner has a three-down skill set he showed off both in college and in the AAF and will pair nicely with former Chargers RB Kenneth Farrow who the Dragons took in the second round and 10th overall in the draft.

Larry Rose III leads all college RBs in receptions and receiving yards but finds himself in a crowded backfield that also features Elijah Hood for the Wildcats. Hood was drafted in the first round of the XFL Draft and also taken in the seventh round of the 2017 NFL Draft by the Raiders. We don’t really see L.A. topping many of these lists for production, but their backfield should not be slept on.

Dallas RB Dimitri Flowers leads the league in college receiving TDs but he was used sparingly on the ground. Flowers was listed as a full back and running back in college and could be used in a versatile role on a Renegades roster full of multi-skilled RBs.

Houston Roughnecks RB Andre Williams is one of the bigger-named players at the position and is neck and neck with Lance Dunbar when it comes to NFL experience. Williams owns the most NFL rushing attempts (332), rushing yards (1,090), and rushing TDs (8) amongst XFL RBs. It’s hard to imagine Williams in a bell-cow role at this point in his career and Houston also has capable pass catchers in their backfield such as former AAF dual-threat Akrum Wadley and Western Illinois product Steve McShane who logged 110 receptions, 1,031 receiving yards, and nine receiving TDs in his collegiate career.

Here is a more in-depth look at each team’s backfield and their totals:

Based on this, we see St. Louis, Dallas, and DC as the teams with the most voluminous backfields based on college experience and production. The only thing about looking at gross stats like this is that each backfield doesn’t have the same amount of players in it right now. Seattle only has three guys while most teams have five. So, this is a spot where averages can be our friend and help level the playing field and see where the true value is by looking at per player average stats. Here is what I found there.

This kind of proved what I had suspected at first glance of the rosters that, though Seattle has an incredibly thin backfield at the moment, they have great quality in the players that are there. A backfield to worry about right now for me is Tampa Bay who comes up on the bottom of most of these stat rankings.

To wrap this up, here is how I would rank the backfields based on all the stats compiled in this research:

The top four are all pretty close and in a tier of their own in my opinion. As mentioned, what Seattle lacks in depth it makes up for in quality. The versatility Dallas has in its backfield puts it just above St. Louis and DC for me. It might surprise some to see St Louis, a team that boasts two of the bigger names from the NFL in Christine Michael and Matt Jones ranked in the middle of the pack, but I wonder what they have left in the tank at this point in their careers. Both were average in the NFL and neither put up prolific numbers in college.

Houston and L.A. are both really close to each other as well but feel a step below the top four. I would put them in tier two. New York and Tampa Bay find themselves at the bottom for me and are pretty interchangeable at the moment. I like De’Veon Smith and Tarean Folston a lot as RBs and they could form a pretty formidable duo for Tampa. The same could be said about Justin Stockton and Tim Cook for New York. Something these guys all have in common is that they were all members of the AAF, so we have a decent idea of what they can offer on this playing field, but the teams as a whole don’t offer very much in the form of experience and past production. Most teams in the league are averaging right around 3,200 yards from scrimmage per player while both Tampa and L.A. are sitting just above the 2,200.

We will see how things really shakedown once final roster cuts are made and if new players come in and join these backfields, but this should give you a pretty good idea of how things look heading into training camp. Thanks for reading and let’s get ready for kickoff!