Hopefully, the former Dallas Renegade Drew Galitz can find himself a home in Minnesota as a Vikings punter. 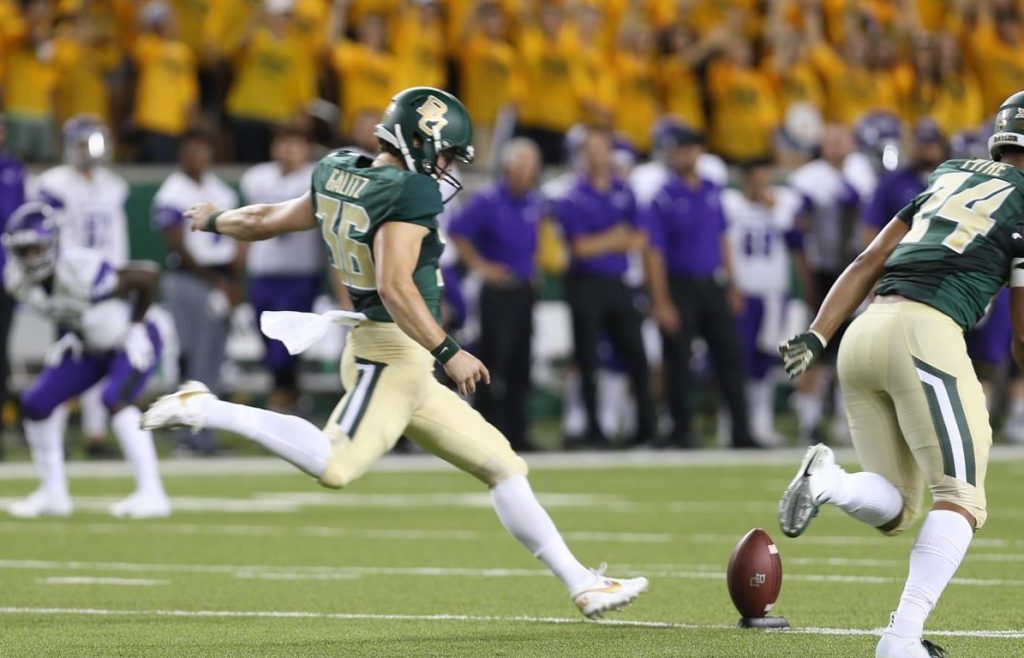 Drew Galitz kicks off for the Baylor Bears. (Image Source)

The former punter of the Dallas Renegades, Drew Galitz earned himself a tryout with the Minnesota Vikings.

Galitz will look to either backup or replace veteran punter Britton Colquitt. Colquitt has been steady this year, averaging 44.4 yards per punt on his 25 attempts with five landing inside the 20-yard line.

Drew Galitz was always a steady punter even during his college days as a Baylor Bear. He booted 166 punts with a long of 70 yards. His average was quite high as well with a 42.1 average per punt. Galitz certainly has the numbers to put himself in the conversation as an NFL punter.

Galitz did very good in the XFL. He finished high in every category possible for a punter, including third on punt average with 43.1 yards on average per punt. The Baylor product also featured a 59-yard boot to showcase the booming leg. He was first in net yards with a 40.8 which is very good on his 18 punt attempts as a Renegade. An absolutely stellar statistic for Galitz is half of his punts landed inside the 20-yard line with zero touchbacks.

Giving Galitz a Chance; he has a full toolbox inside

The former Renegade has a full toolbox just within his right foot. He knows how to punt with the XFL rules by keeping the ball inbounds along with not giving up a touchback. The right-footer also knows how to coffin corner someone like he would perform at Baylor and pin a team within their own five to 10-yard line on any given occasion.

There really is no downside to Galitz, he has an NFL caliber leg, great size at 6’0, 210 lbs which for a punter is very good. He can even kickoff if your team needs it, that was showcased in his college days from time to time.

As a sophomore, he featured 80 kickoffs for 5003 yards, 22 were touchbacks, he did kickoffs very briefly his junior year from time to time. In his senior year, he looked like a well-oiled machine for Baylor. He blasted 56 kickoffs with 32 of them being touchbacks for an outstanding 3747 yards.

Galitz is almost a Hunter Niswander comparison if Galitz could play kicker too. Typically a specialist will be good at one of the three positions, two is very good.

Hopefully, the former Dallas Renegade Drew Galitz can find himself a home in Minnesota as a Vikings punter. He would fit the mold well.