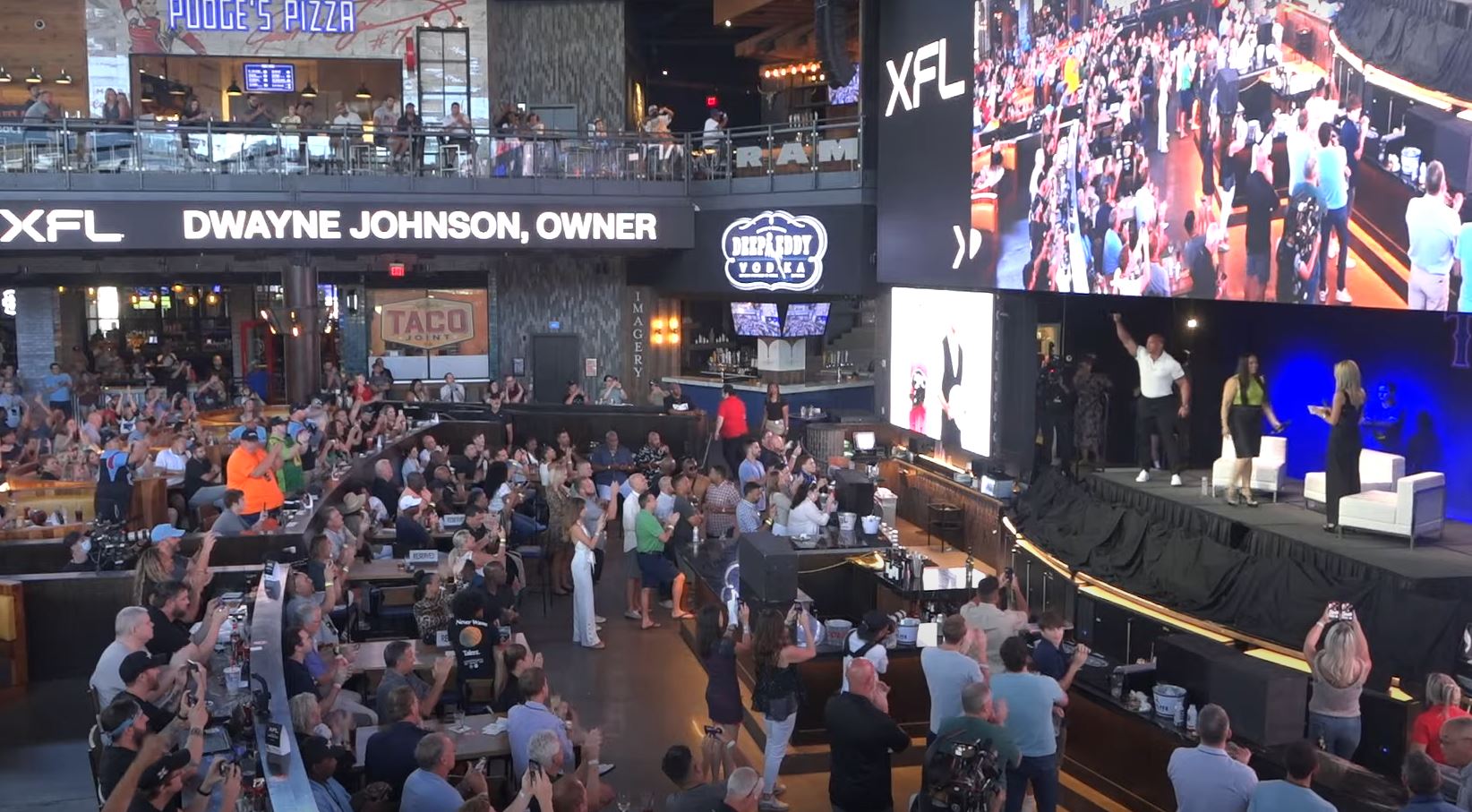 Chants of “XFL” rang out in the audience as co-owners Dwayne Johnson and Dany Garcia held court on stage at Texas Live! Sunday night, the first time they’d been in front of fans since purchasing the XFL out of bankruptcy in 2020. It was a friendly welcome for the new regime, whose XFL Town Hall was designed to officially introduce the cities in which the league will play in 2023.

ESPN’s Laura Rutledge emceed the event, continuing the synergy between the league and its television partner. Streamed on XFL.com and the XFL YouTube page, the Town Hall lasted about an hour, though fans attending live were a part of a Q&A session afterward that was not broadcast.

Johnson and Garcia joined Rutledge on stage first. Much of what they discussed was old news to consumers of all things XFL, but important to hear for new fans who may have been plugging back into the league for the first time since the 2020 version shut down. Among the anecdotes: The story of Garcia approaching Johnson about buying the league; Johnson’s Player 54 mantra; their designs for the league, and more. Garcia did say fans would be shaping the league, along with ownership, over the coming weeks and months. What form that might take was not explained.

Eventually, it was time for what everyone was watching for: The official reveal of the cities. Venues were also advertised to be revealed, but the XFL waited to share those in a press release sent out during the town hall rather than on the broadcast itself. A video package disclosed the expected locations, with Arlington substituting for Dallas, a cosmetic change more than anything. Johnson noted in his comments that choosing the cities was “one of the hardest things we’ve done” as XFL owners.

The total number of live viewers on YouTube peaked at more than 3,400 at the time the cities were unveiled. It was clear that people had tuned in specifically for that news, as over 1,000 folks dropped off in the several minutes afterward.

Head coaches were brought on stage next for some manufactured banter and trash talk, introduced along with the city in which they’d be coaching. Director of Player Personnel Randy Mueller subbed for Jim Haslett, who was said to be on an Alaskan cruise with his wife and thus absent. Anthony Becht (St. Louis), Terrell Buckley (Orlando), Mueller (Seattle), Reggie Barlow (Washington, D.C.) and Rod Woodson (Las Vegas) were brought up first. Then the Texas coaches, Bob Stoops (Arlington), Wade Phillips (Houston), and Hines Ward (San Antonio) were given the floor separately.

If nothing else, this gave the coaches an opportunity to share their personality with the fans, something that the XFL will likely rely on heavily to attract audiences both locally and nationally given the name value of the coaches will be much more recognizable than the players competing on the field.

The streaming portion concluded with Garcia, Johnson, and XFL President Russ Brandon, who acknowledged many of the people working behind the scenes in executive roles. A few other notes from the Town Hall:

*Deposits for season tickets were made available on XFL.com at the conclusion of the night’s festivities. XFL.com/tickets is where seats can be reserved.

*Not only would fans be a part of the reimagining of the league, but Garcia said she wants to bring the game itself closer to fans. She mentioned bringing content to fans in ways that had never been done before, so that “you’re not just watching, you’re experiencing the XFL.”

*In the “this could end up meaning nothing” department: Rutledge noted that XFL games would be shown on ABC, ESPN, ESPN2, and FX. Notably absent from that list is ESPN’s streaming service, ESPN+.