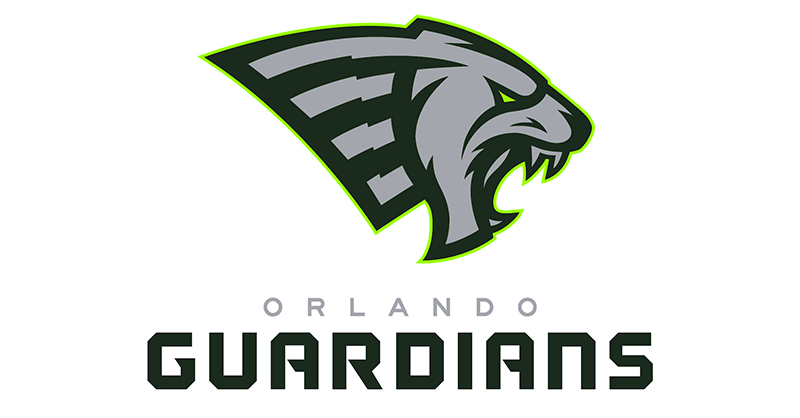 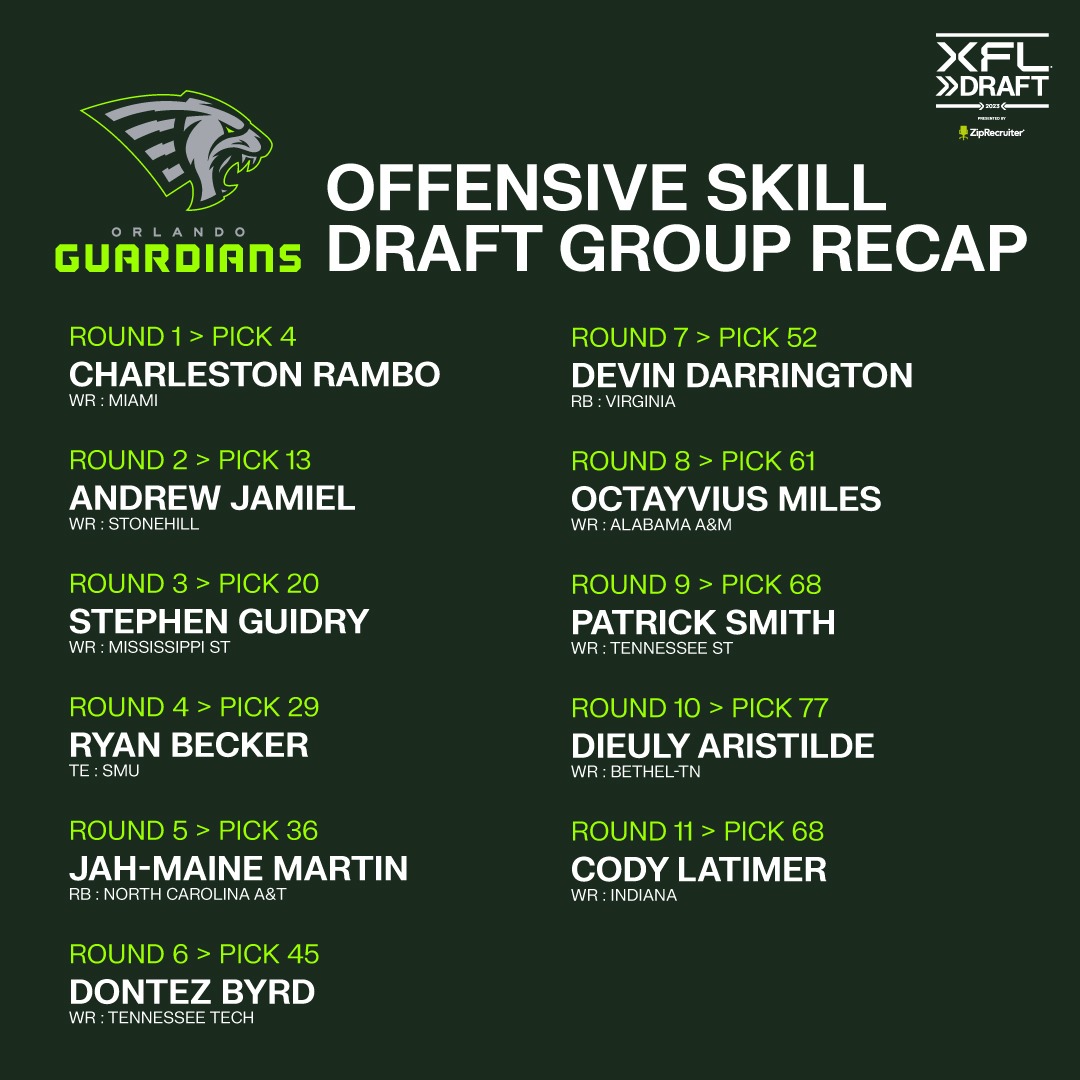 Orlando went wide receiver on eight of its 11 skill position picks. Second rounder Andrew Jamiel received a tryout with the New England Patriots this summer thanks to Richard Sherman in a story that got some traction during training camp. At nearly 250 pounds, Ryan Becker was not a receiving threat in college (16 career catches), so Orlando may be yet another XFL team that foregoes that position. Both running backs selected are rookies this year who only received NFL minicamp invites. 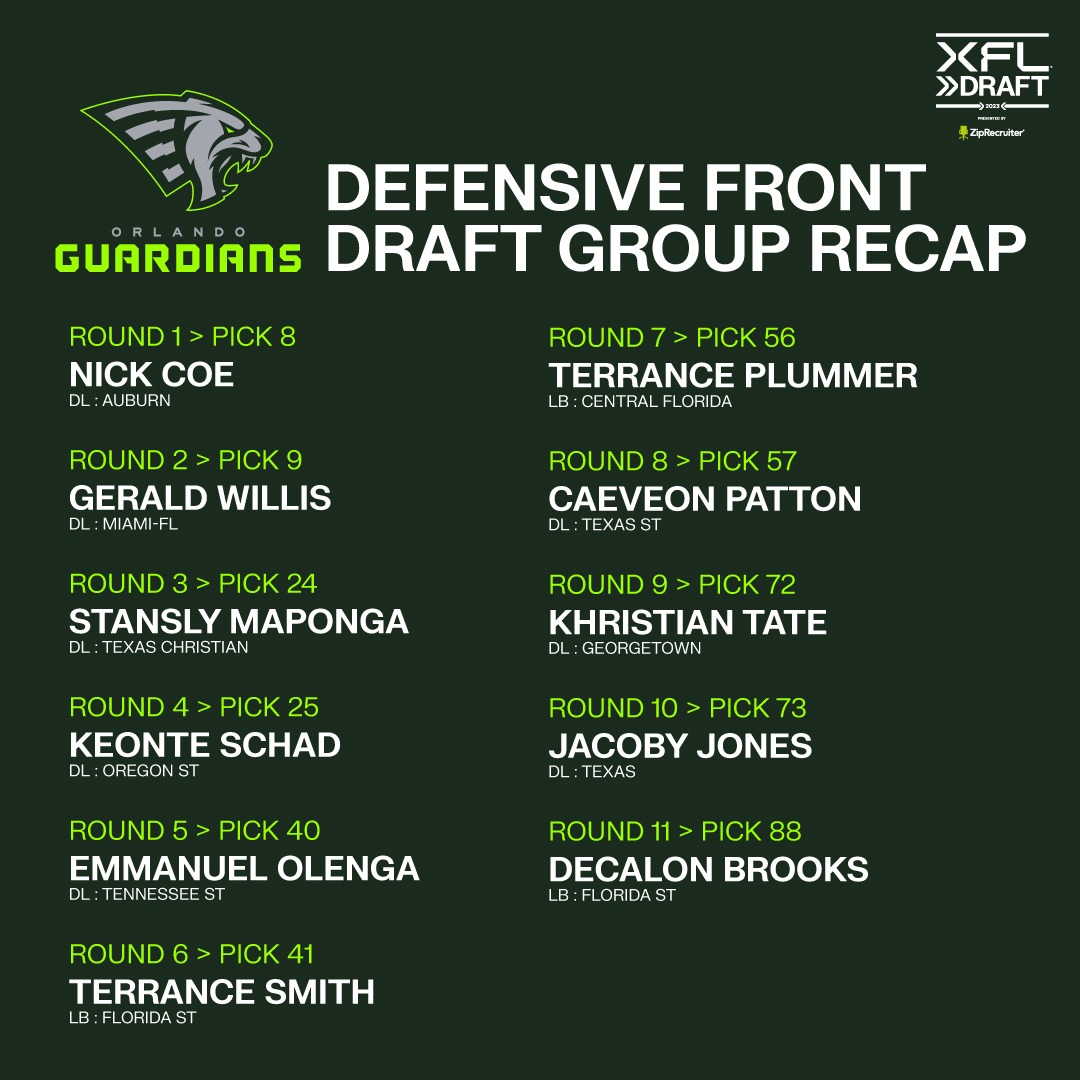 Linebacker Terrance Plummer returns to central Florida, as he was a Tampa Bay Viper in 2020. Perhaps the biggest name from this list is Gerald Willis, a defensive tackle who has been with the Baltimore Ravens, Miami Dolphins, and Green Bay Packers in the NFL. Four players picked in this phase played college football in the state. Two of them came from head coach Terrell Buckley’s alma mater, Florida State. Stansly Maponga is far-and-away the most experienced of this phase, with 26 NFL games under his belt. 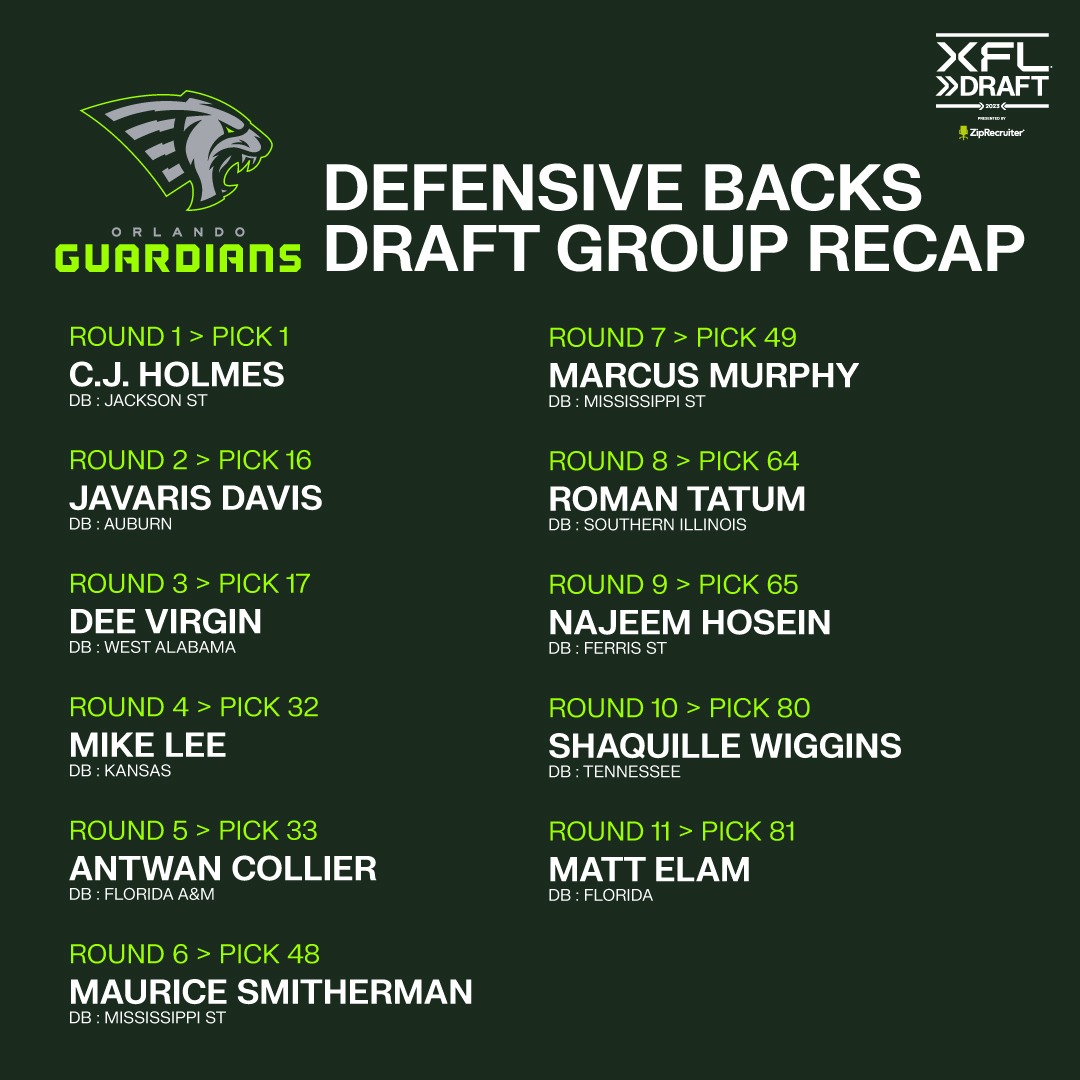 Deion Sanders has turned around the Jackson State football program, making it the class of the HBCU schools. CJ Holmes, the 1st round draft pick of this phase from Orlando, exemplifies that. However, he doesn’t come without some red flags: One scouting report expected him to run a 4.4 40-yard dash time, but he only ran a 4.78 at his pro day. He’s also predominantly a slot corner, limiting where he can be used on the field. Matt Elam, a former NFL 1st round pick, had 15 tackles and an interception with the D.C. Defenders in 2020. Javaris Davis is a notable selection in the 2nd round. 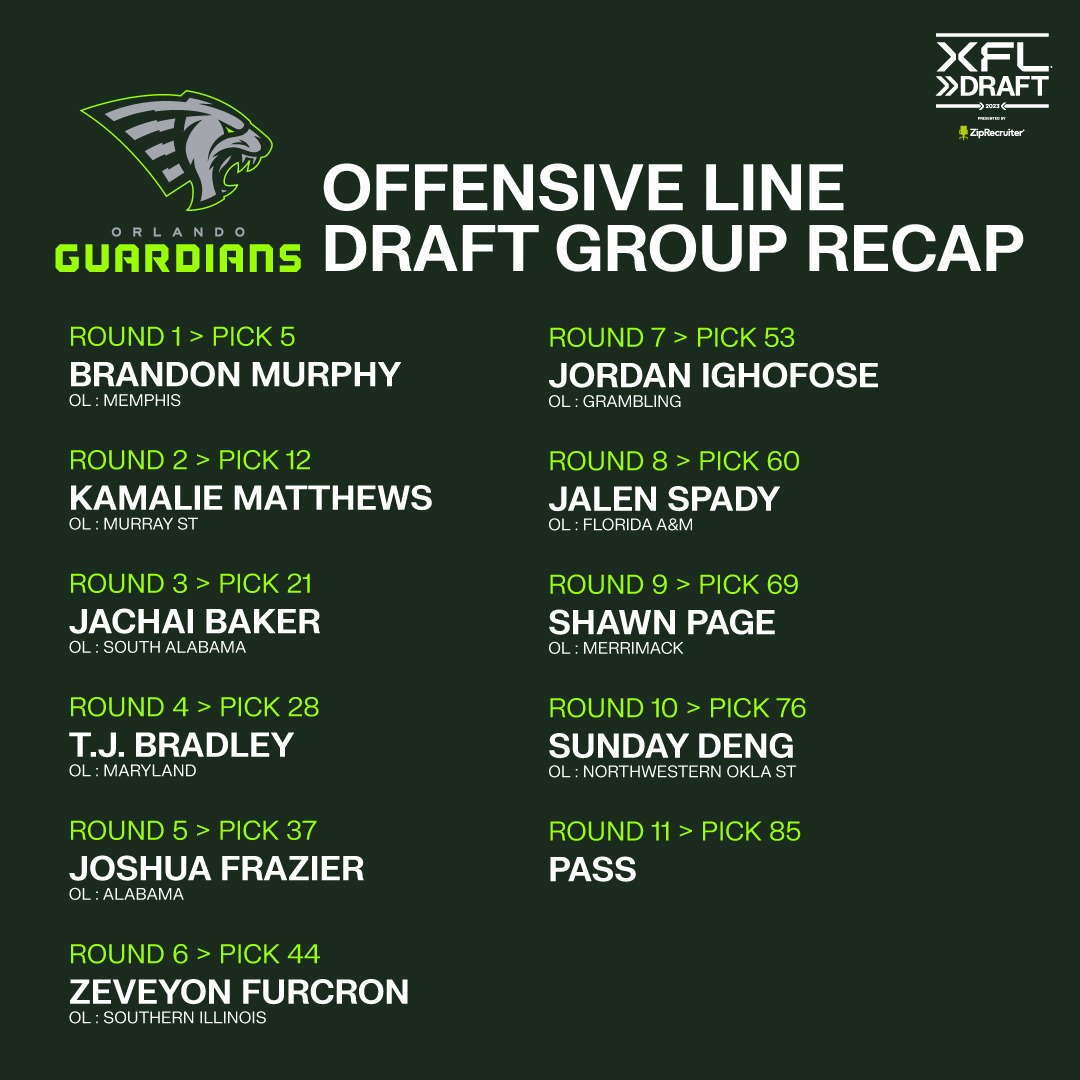 Orlando used ten of its 11 offensive line picks in his phase. Joshua Frazier was drafted by the Pittsburgh Steelers and turned into a nose tackle, but he returns to his original position of offensive line in the XFL. Orlando didn’t draft a true center, but they did draft a lot of players that have little NFL experience and have graduated from college some time ago. They may have kept themselves in shape by playing in smaller football leagues, but relying on them as heavily as Orlando did here is a huge risk at an important position.

Jose Borregales may have been the best kicker available, so there’s no questioning Orlando on that pick. The Guardians continued their curious choices by selecting Andrew Anckle to punt, he of the 38.0-yard gross average at a Division II McKendree in his senior season of 2021. Tommy Auger is better-known as a tight end but was selected as a long snapper.

The Guardians bolstered their depth during the Open Phase, mostly at defensive back, where they drafted four more players. They also increased their Mississippi representation to seven players coming from either Ole Miss or Mississippi State in this draft. Jeremiah Gemmel was a quality pick, and getting Fred Taylor’s son, Kelvin Taylor, in the back half should help the RB group.

They added Mitch Kidd from Redlands College as a third quarterback; he has played some indoor football since graduating in 2019.

Best Pick: Probably K Jose Borregales or LB Jeremiah Gemmel in the Open Phase. There really wasn’t a lot of competition for this superlative.

Questionable Pick: Where to begin? How about along the offensive line, where 30 year-old Kamalie Matthews was a 2nd round pick despite having little to no pro experience outside Fan Controlled Football.

Small School Stud: Stonehill College is a Division I FCS school that plays in the Northeast Conference. Andrew Jamiel, a Stonehill alum, has a real chance to be a difference-maker at receiver for the Guardians.

Strongest Position Group: There were a few quality defensive line selections in the Defensive Front Phase. The Guardians seemed to agree, as they didn’t add any more at that position in the Open Phase.

Weakest Position Group: Overall, it may be the offensive line. But when put in the context of what the rest of the league has done, it’s difficult not to believe Orlando is losing the arms race at quarterback. I ranked Orlando sixth of eight teams when I analyzed the QB allocations; I think after Thursday, San Antonio jumped them, leaving Orlando ahead of just D.C. and its one QB.

Key Connection: Orlando’s draft philosophy clearly valued players who have played in lower levels of pro football, such as the IFL and FCF. At least ten players drafted by Orlando played in the FCF in 2022, while four were in the IFL. Eight have spent some time in the CFL, with four playing in The Spring League over the years. Because rosters are hard to come by for leagues like those, the numbers could be higher than I’ve quoted here.

The Guardians also drafted a large number of players that attended league Showcases over the summer: A total of 20 of their selections were at XFL Showcases, including all three of their quarterbacks, making for almost one-quarter of the total Showcase participants drafted last week.