Luis Perez has the skill set, the heart, the talent, the arm. 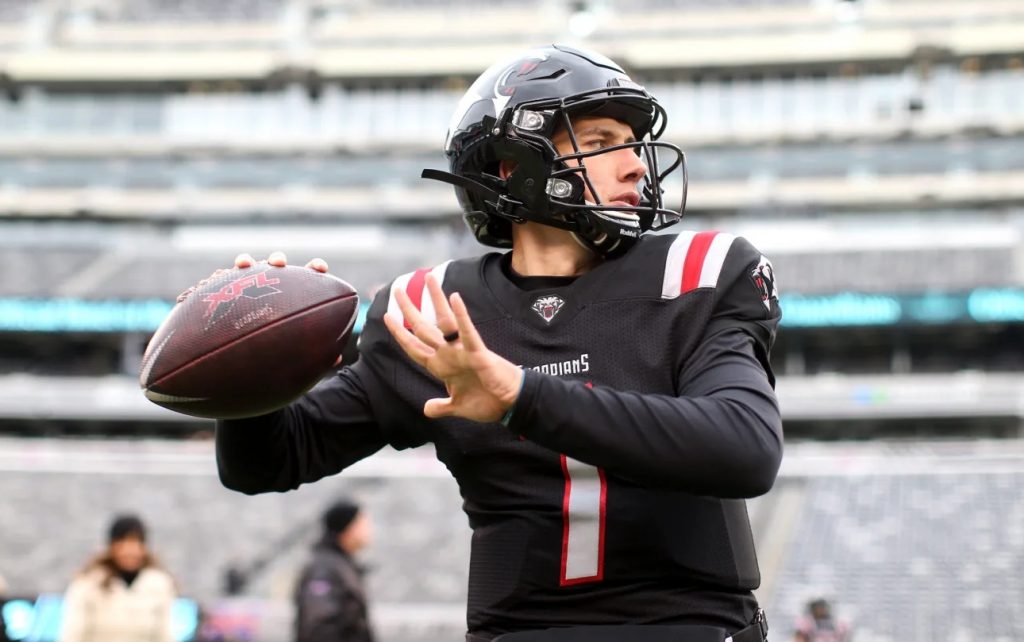 One of the most underappreciated quarterbacks in the XFL had to be Luis Perez. The Division II standout at Texas A&M Commerce has a very unique story.

Perez’s first love in the sports world was not what you’d expect from a future professional quarterback. The first sport that he loved was actually bowling. He was so good that he planned on going to college on a bowling scholarship. He could have backed up that scholarship too. Perez bowled 12 perfect games during his bowling career.

Perez did play two years of high school football, but he had been moved around at so many positions he quit.

Started from the Bottom

Being a walk-on at Southwestern College with no film and no experience, Perez was literally at the bottom of the depth chart. But, what he did have was heart and perseverance, a whole lot of it.

Perez was slated at ninth on the quarterback depth chart to start the year. But, as things happened with transfers and injuries, Perez scooted his way up the chart to be the official back up.

During the week three-game, the starter was injured, thus catapulting Perez into the starting role. He played a very good game, ending the game throwing for 250 yards, two touchdown passes as well as one rushing touchdown, leading his team to a win.

The next season, Perez earned the starting role.  He ended the season earning All-Conference honors and lead his Jaguars football team to a successful year when they brought home a conference championship. He showcased his arm on multiple occasions but one time that sticks out was his 299 yard game with three touchdowns to compliment it.

When Perez’s time at Southwestern College ended, he visited a few schools including Oklahoma State. But the one he chose was Division II powerhouse, Texas A&M- Commerce.

Red-shirting in his first year, in his second year Perez seized the opportunity and won the starting quarterback role. The perennial juggernaut had great results with Perez as the Lions won 10 games and went on to win the Lone Star Conference. Perez led the Lions to the Division II playoffs where they won the first game in the playoffs for the first time since 1991, only to be defeated in the second round. Perez was first-team All-Conference, a Harlon Hill Award nominee (the equivalent of a Division II Heisman Trophy), and Honorable Mention All-American.

In his senior year, Perez did just about the unthinkable when he brought home a national title. After the Lions ended the year with a respectable 10-1 record, Perez plowed through the playoffs, including a double-overtime victory against Central Washington. Afterward, the Lions defeated the West Florida Argonauts and the they won their second national title in school history and their first since joining the NCAA in 1982.

Perez’s accolades did not end there as he won the Harlon Hill Trophy, National Offensive Player of the Year, Lone Star Conference Offensive Back of the Year, and First Team All-American at the Division II level. He also received invitations to play in the NFLPA Bowl, taking place in the Rose Bowl stadium. That was the final game of his storied college career.

After going undrafted, Perez was signed by the Los Angeles Rams as a free agent. Perez saw action in the final preseason game against the New Orleans Saints where he played the entire second half, threw 15 passes, completing 8 of those, with one interception.

The young quarterback was waived the day after preseason, but signed again on the Rams practice squad. He stayed with the team for 18 more days before being released.

Perez joined the Alliance of American Football, originally as a member of the San Antonio Commanders, but during the quarterback draft, he was selected by the Birmingham Iron.

In his first game as a member of the Iron, he put on a clinic. Perez passed for 252 yards alongside completing 19 0f 33 pass attempts. The gunslinger finished up the season with 1,460 passing yards, 5 touchdowns, and 6 interceptions. The league folded after week 8.

After the AAF folded Perez spent a short time with the Philadelphia Eagles, and the Detroit Lions. However the prospect of playing time was distant.

In October 2019, Perez was allotted one of the top eight quarterback spots in the XFL, and assigned to the Los Angeles Wildcats. However, days after signing a contract with the Wildcats, Perez was traded to the New York Guardians for former Arizona Cardinals quarterback, Chad Kanoff. This was the first-ever trade of the new XFL.

Joining the Guardians as the back up to Matt McGloin, Perez got his chance to show his skills in week three when a struggling McGloin was pulled. Perez completed four of his five passes for a touchdown and a brisk 39 yards in the air.

In week four, now the starter, Perez completed 18 of 26 passes for 150 yards and a touchdown in a win over his former team, the Los Angeles Wildcats.

In week five, Perez won the game for the Guardians the second straight week, this time over the Dallas Renegades. He completed 16 of 30 passes for 229 yards, one touchdown, and one interception.

After week five, league play was put on hold due to COVID-19.

Luis Perez has a very interesting story that serves as an inspiration to many who are told that they can’t achieve their dreams. The XFL was a perfect place for him to show his true mettle. Perez deserves to be on an NFL squad, and should be given a look.

Luis Perez has the skill set, the heart, the talent, the arm. Most importantly he learns from his mistakes. A smart player like Perez would be an asset to any team.