The XFL’s New York Guardians may return in name only, but not with the people who were a part of building the franchise. 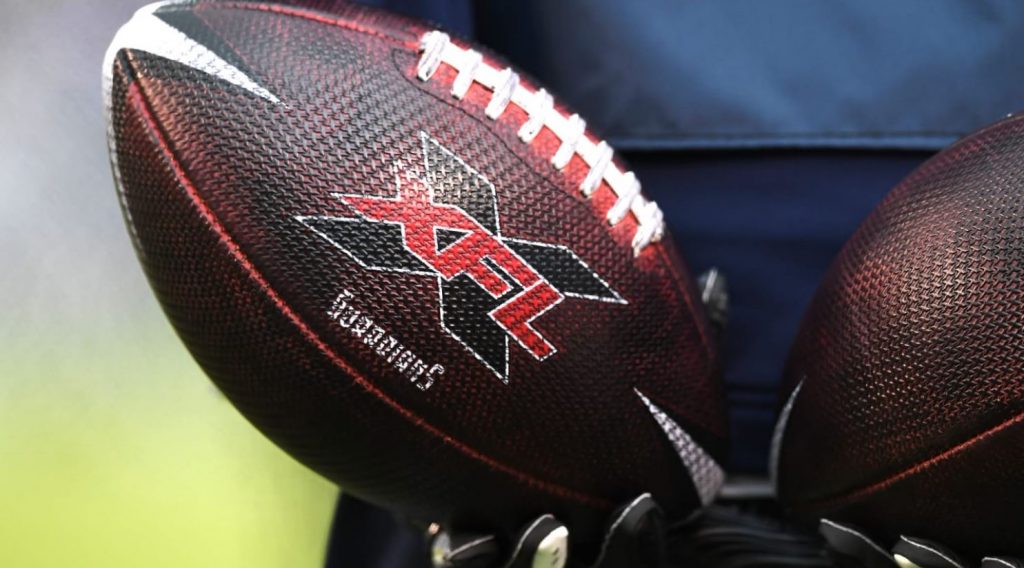 The New York Guardians may return in name only, but not with the people who were a part of building the franchise. (Credit: XFL.com)

Uncertainty surrounds the eventual return and direction of the XFL. Many want the league to come back as soon as possible, but for those who were associated with the New York Guardians, there may be no going back.

I wish it were as simple as just turning the lights back on. The truth is that as much as XFL supporters want to see the league pick up right where they left off, it’s a different world now than the one that existed six months ago. Time and circumstances could change what’s to come in the future.

All of us probably wish that we could back to the start of the year. To quote a Wu-Tang classic from the nineties, “Can it be that it was all so simple then?”

Back in early March, things were starting to heat up for the XFL. The New York Guardians were hitting their stride and preparing for a playoff push with the undefeated Houston Roughnecks coming to town. Then, just like that, everything vanished. All the preparation and hard work was cast aside and discontinued.

It was a tough pill to swallow for the hundreds of employees in the XFL. The players, coaches, team employees, executives, and the fans were left stranded on an island of disbelief. How could something so promising encounter such unforeseen misfortune?

Fast forward to the present day, and many of the former members of the league are in the dark. They know that the XFL is returning, but they don’t know when. Most importantly, they don’t know if they will be a part of it again.

The belief is that the New York Guardians will return in name, but there are so many questions surrounding the future of those who helped launch and then build the franchise.

Let’s take a look at those questions. 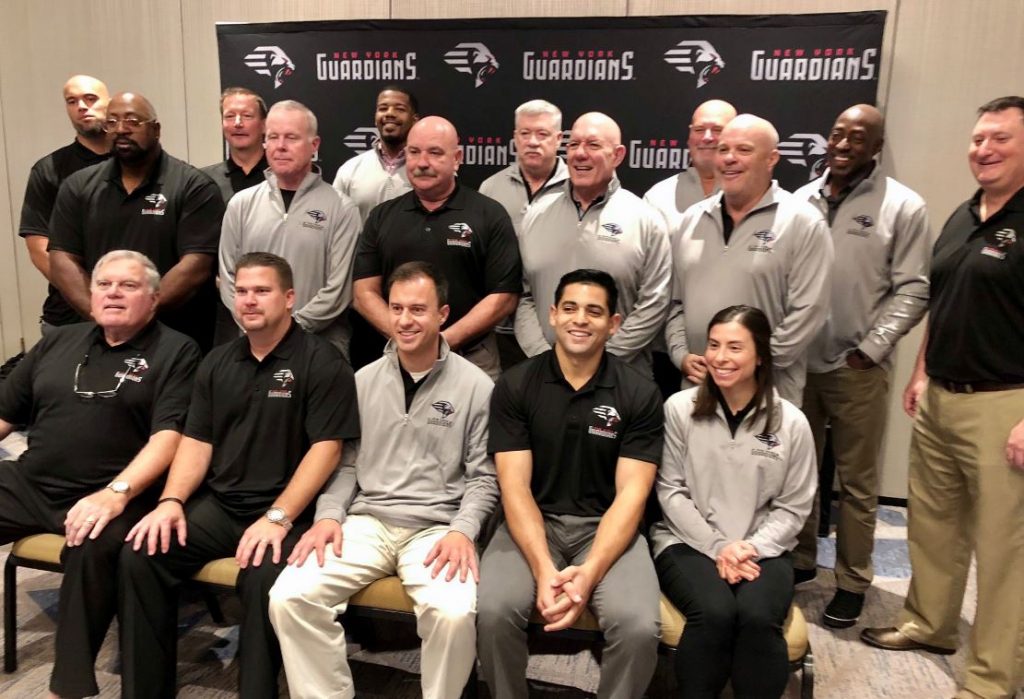 Will the Guardians coaches and front office return?

Guardians Head Coach/GM Kevin Gilbride came out of self-imposed retirement to coach pro football again. By all accounts, Gilbride loved it every step of the way up until the bitter end. One that saw Kevin Gilbride on the phone with the then owner of the XFL, Vince McMahon, right up until the league suspended play. At 69 years of age, is Kevin Gilbride willing to recommit himself yet again? If the Guardians are still in his hometown. Perhaps, he would.

Before the league closed up shop, Kevin Gilbride asked then commissioner of the XFL Oliver Luck if he should tell his coaching staff to press pause in case the league returned, or to instruct them to start looking for work elsewhere. Luck gave Gilbride the cue that it was over. The veteran coach was looking out for his people.

While some assistant coaches like great offensive line and tight ends coach Jonathan Himebauch of the Tampa Bay Vipers have moved on (Air Force), the majority of the great assistants on the teams’ staffs are out there still available and chomping at the bit to get back into the fire. They want back in. The real question is, when will those doors reopen?

Even if the new owners of the XFL set a target return date, there is no guarantee that many of these assistants will be back, especially if that return date is 2022. The most significant element for the Guardians’ assistant coaches is the return of Kevin Gilbride. If he’s back, the band is more likely to get back together. If not, a new head man would bring in his own people. That could mean that the great members of New York’s front office could be moving on as well. From Director of Player Personnel Alan ‘Trip’ MacCracken, to Director of Football Ops John Peterson, to Scouting Manager Evan Ostrow, and Football Ops Manager Chris Thompson.

Team President Janet Duch and her entire staff did a great job of putting everything together in what is a very competitive market. Will the league go in a different direction and realign the Guardians’ top brass? If the XFL is in a bubble in 2021, the traditional market model might not be in place at the outset. At least not until 2022.

Will The  Guardians Players Return?

Much like the assistant coaches. The players want back in. As of press time, there are five former New York Guardians on NFL rosters:

By this Saturday, NFL teams will be cutting down their rosters to 53. On Sunday, teams will form their sixteen player practice squads. So each one of these former Guardians has a shot of making it onto an NFL field this year.

Unfortunately, there are several former Guardians’ players who were overlooked and did not latch on to NFL rosters. Some like the ultra-talented cornerback Ranthony Texada made their way into the CFL, only to see their league canceled due to the pandemic. Many XFL players had their seasons cut short in the XFL and were unable to produce an entire body of work for NFL teams. The restrictions due to the pandemic and the reduction in off-season NFL rosters from 90 to 80 also hurt players’ chances. Setting that aside, players like RB Darius Victor, DE Bunmi Rotini, CB Jamar Summers, CB Ranthony Texada, and others should be on NFL rosters right now. It’s a crime that they are not.

In recent weeks, the NFL has lifted the prohibition on player tryouts. During the summer, teams were only allowed to work out free agents if they had an open roster spot. The last-minute change has opened the door for former Guardians to have tryouts, like kicker Matt McCrane, Punter Justin Vogel, and Defensive Lineman Toby Johnson.

If the XFL gets back up and running, many of these Guardians’ players who are not under contract could return. However, a change in the front office or coaching staff might bring on organizational resets.

The football talent market has changed too with new players in it. Once NFL teams formalize their rosters. (53 Active/16 PS Squad). There will be 352 players who don’t make NFL rosters. There were also 320 players cut by NFL teams when rosters were trimmed from 90 to 80 before camps started. Not counting the XFL’s Team 9, the league had 416 players on their eight-team rosters in 2020. The players in the 2020 version of the XFL have new competition for roster spots, not to mention the growing number of CFL players who have opted out of their league to potentially play in the states.

When Will The XFL Be Able To Return To Play?

The magic question that does not have an easy answer. Even if the goal is the spring of 2021, the clock is ticking. Suppose the XFL sets a February or March date of return. Then perhaps, teams can go back to business as usual.

Except for the DC Defenders, who lost their Head Coach/GM Pep Hamilton to the NFL (Chargers), and Team President Erik Moses to Nascar, most of the league’s top executives and coaches are available and ready to go. Sources indicate that Head Coaches like Houston’s June Jones and LA’s Winston Moss are ready when the league is.

However, if the league can not resume play until 2022, then all bets are off. Many of the former XFL employees may decide to move on to other ventures. There are families to feed and careers to continue. The option of waiting around for nearly two years will not suffice for most.

Where Will The Guardians And The XFL Play?

In a perfect world, the XFL is back to functioning as a traditional sports league model, with all of their teams like St.Louis and others going back to hosting home games in their markets. As we all know, in this pandemic time, it’s a gradually improving world but not a perfect one. Far from it, anyway.

Any bubble structure by the XFL in 2021 will curb regional ticket sales. The entire league’s games could be played in one, or maybe two locations.

Many pundits feel that New York should not be a part of the XFL at all. But that’s an argument for another time. It’s quite clear to many, however, that the Guardians need to set up shop somewhere besides MetLife Stadium. The new owners must choose the teams’ next playing home wisely, but it’s a decision that may not be required until later on down the road.

The bubble might be the only immediate recourse for the XFL in 2021, and while on the one hand it could shave millions off the league’s budget because of cutbacks in travel and personnel. On the other hand, the league can not survive long-term without revenue. A good portion of NFL teams are selling select tickets to their games this season. The XFL, from a business structure, should be hoping to do the same. Bubble or not.

The intention of the new owners of the XFL in Dany Garcia, Dwayne Johnson, Gerry Cardinale, and RedBird Capital, will be to recapture the magic that the league had going. The people who worked in the XFL are what made the league achieve that magic. But time and circumstances could change all of that.

“There was a lot of great work that was done and was succeeding. But I think whenever you have time to reset, I think it’s an important time to just reassess.”
– New XFL Owner Dany Garcia- Per The Athletic

XFL supporters are antsy for league news right now. The same way that die-hard fans clamored for the league to reveal its team names and uniforms last year. It appears that at this moment, the new XFL is in the “reassess” phase.

The possibility exists that the new owners are using this time to reset and reassess. If the league takes that course of action and truly resets rather than restart, then it may mean a different existence for teams like the Guardians in the new XFL. The team may return in name only, but not with the people who were a part of building the franchise.