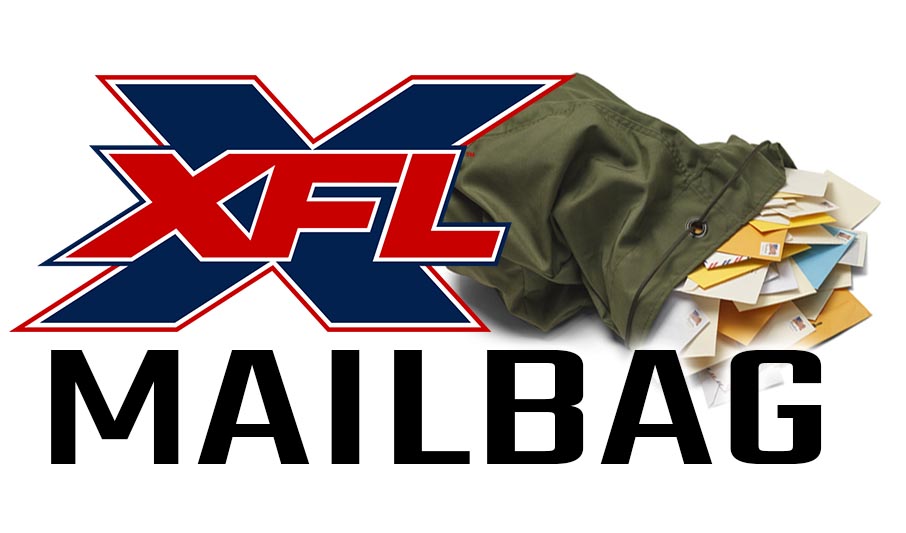 It’s been a while (over a year!), but I’m back with the fifth installment of our XFL Mailbag. I’d like to get back to doing these monthly, but I’m at the mercy of the questions YOU the reader send in. Remember, if you have any questions about the upcoming XFL season, or any other iteration of the XFL, send them to be answered in a future mailbag to XFLMailbag@gmail.com.

Previous editions of the XFL Mailbag can be found here: https://xflboard.com/xfl-mailbag/

Questions are edited for length and clarity.

Dozens of people ask: “Will the XFL have open tryouts? If so, when?”

Even though this question has since been answered by the league – all Showcases this summer are sold out but you can get on the waiting list here – I wanted to include this because of the sheer volume of similar questions I’ve received over the last year to XFLMailbag@gmail.com. In fact, this question was asked and answered in a previous mailbag as well, though I ended up being incorrect in my prediction about the potential of the league holding open tryouts.

The bottom line is that even with a league short on details for much of the last 365 days, and with no track record of long-term success, that didn’t stop literally dozens of players from reaching out through the above e-mail address to inquire about tryouts. With as many alternative leagues of varying sizes that are popping up, there seems to be no shortage of players who are interested in continuing their on-field careers. We here at XFL Board certainly support all of those players in chasing their pro football dreams.

Matthew asks: “Will the New York Guardians stay? Will there be new teams for new cities? Is Tampa Bay moving to Orlando?”

No, probably, and it seems likely. Given the list of cities reported by Mike Mitchell two months ago and confirmed by Pro Football Network’s Aaron Wilson this weekend, the Guardians – at least the New York version – are kaput. It’s interesting that the XFL is apparently avoiding some of the bigger cities like New York and Los Angeles in the reboot, which could cost them in the television viewership department. Despite their sizes, LA and New York averaged the fewest and second-fewest fans respectively. In fact, the bottom three cities in attendance (third-fewest being Tampa Bay) have evidently been abandoned.

I would expect new identities to be crafted for the teams in new cities like San Antonio, Orlando, and Las Vegas. So while you could make the connection that the Tampa franchise is “moving” to Orlando, I’m not sure the XFL will see it as a continuation of that team. It would be very easy to transfer the “Vipers” moniker from Tampa to Orlando, but I would consider that a long-shot. The new ownership group hasn’t shown any sort of nostalgia for 2020 as evidenced by the changing of the league logo, so I’m not sure they’re married to any of the team nicknames from that season. Even though many cities from 2020 will return, I don’t think it’s a guarantee that the nicknames will return with them.

Tammy asks: “What do you think are the odds of Houston keeping a team? My family and I loved watching the Roughnecks and will hate it if we don’t have a team.”

I’ve got some good news and some bad news for Tammy: First, the good news is based on the list supplied by Mitchell and Wilson in the previous answer, Houston will be returning to the XFL fold. The bad news is they may not be the Roughnecks. The XFL was forced to abandon the Roughnecks trademarks last year when the NFL opposed the logos, finding them too similar to the Houston Oilers. The new owners could keep the Roughnecks name and just supply a new logo; however, they may decide to completely re-brand the team, especially if they’re going to do that with other franchises anyway.

Richard asks: “Do you think the league would bring back some of the 2001 or 2020 logos, or would they make up new nicknames and logos?”

The question specifically about 2001 is compelling because the XFL will reportedly return to Las Vegas, where they had a team during the inaugural season. Could the Outlaws then return in a nod to the league’s history? I tend to doubt it; if new ownership won’t even keep all the 2020 identities, even after Dany Garcia’s interest in the league is what led to her and her partners purchasing the XFL out of bankruptcy, I find it hard to believe they’ll bring back a brand from 2001. It would help tie all the versions of the XFL together for 2023, but I don’t think the new owners have much interest in that. It’s also unclear who owns the “Las Vegas Outlaws” trademark, as it was used by an arena league team in 2014 and 2015.

As for the returning 2020 cities, I would venture to guess the St. Louis Battlehawks are safe, and perhaps the Dallas Renegades too (given the continuity with Bob Stoops returning as head coach). I wouldn’t be shocked if any other returning teams are re-branded.

Richard asks: “Do you think Under Armour will be making the XFL uniforms?”

Richard gets two questions because he’s a friend of the site. The connection to Under Armour is through Dwayne “The Rock” Johnson, whose Project Rock brand is featured in Under Armour stores and on their website. The company is no stranger to making football jerseys, so it would be in their wheelhouse. Champion was the outfitter of the XFL in 2020.

Part of the reason XFL fans were excited to see Johnson on board as owner is because of his business connections like this and the doors it could open for the league. So while no official word has come down from the XFL (remember, we still don’t even have cities or teams announced yet), it’s not unreasonable to connect the dots to Under Armour at least having some sort of presence when it comes to league apparel. It’s worth noting Under Armour already looks to have some sort of deal with the XFL: The company’s logo can be seen on some generic XFL logo shirts available for purchase on XFL Shop.