The XFL is relaunching in 2022. How will the new timeline impact the 2020 version of the New York Guardians? 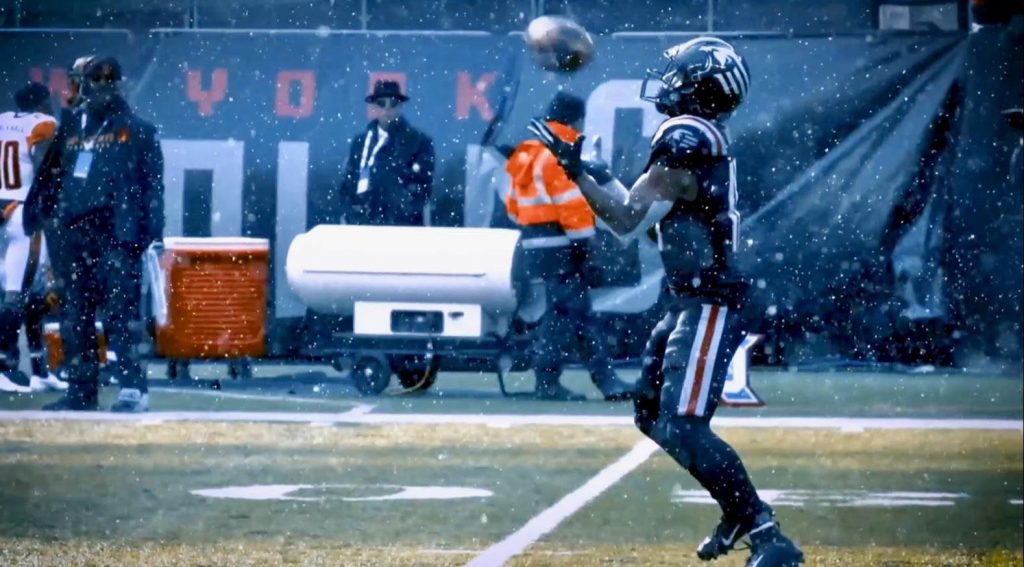 How will the XFL timeline impact the New York Guardians? (Credit: XFL/Youtube)

The 2022 XFL relaunch date brings clarity to the league’s supporters. However, for the players, coaches, staff members, and others involved. The new timeline offers more uncertainty. Are the New York Guardians returning in name alone?

At this point, there’s little doubt that the New York Guardians will be back. The XFL’s new owners, Dwayne Johnson and Dany Garcia have prominently featured their eight adopted teams in photos and the recent XFL 2022 teaser video. In the hype video narrated by Dany Garcia and ‘The Rock,’ the New York skyline makes a cameo with the proud tag line “The Cities.”

A lot can change between now and the 2022 season; two years out of play will impact the league as we knew it. For New York specifically, to borrow a Hollywood term, the reboot could see an entirely different cast of characters. Some of the original players could return, but many of them will not. After all, none of the league’s actual team employees are under contract. The new timeline could indicate an entirely different league personnel-wise.

XFL President/COO Jeffrey Pollack is back. In 2019, The league entrusted Pollack with hiring all of the team’s presidents and building its business infrastructure. While some team presidents like Kurt Hunzeker (BattleHawks) are on standby, hoping to finish what they started, others like Erik Moses (DC) have moved on to other ventures (NASCAR). The questions are, how long are other team executives willing to wait. And does the league want them back? RedBird Capital may tap into its many sports connections to establish a new direction.

The slogan for the New York Guardians in 2020 was “On Duty.” However, will that apply to those who guided the franchise from day one? Like Guardians Team President Janet Duch. After all, building the New York Guardians from the ground up was challenging. Whoever takes on that role in the lead up to 2022 is taking on the task of being successful in an oversaturated sports market.

Janet Duch has a wealth of experience that helped the New York Guardians. From her time as Senior Vice President of Marketing and Communications for NFL On Location Experiences. Before that, she spent 18 years with Madison Square Garden. As Senior Vice President of marketing with the New York Rangers and New York Knicks. With the Guardians, like a Head Coach, Duch put together a talented support staff to aid in marketing the team successfully. If Duch doesn’t return, someone will need to fill her shoes with a similar background working in the tri-state area.

Above all else, knowledge of the New York market will be vital in whoever assumes the role of team president for the New York Guardians. A new leader of the franchise’s business end will mean starting over with a different vision.

Another aspect of the XFL that could change moving forward. One of the benefits that the league had in presenting quality football was the experienced leaders in their team front offices.

The New York Guardians Director of Player Personnel was Alan “Trip” MacCracken. Firstly, He brought experience as an NFL executive with the Cleveland Browns and Kansas City Chiefs. And more importantly, MacCracken’s time in the AAF with Arizona proved useful in the Guardians’ knowledge of players. As a result, many AAF players ended up with New York in the XFL.

New York Guardians Head Coach/GM Kevin Gilbride came out of self-imposed retirement to coach pro football again. By all accounts, Gilbride loved every step of the way up until the bitter end. A Kevin Gilbride return ensures that many of his troops come along for the ride again. Gilbride was the boss of the Guardians, and it was something that he enjoyed immensely. The opportunity as GM/HC enabled him to put an entire franchise together. Doing it in his hometown was a plus.

A 2021 XFL season raised the realistic possibility of Kevin Gilbride returning, but 2022 creates doubt. The time lapse may cause Kevin Gilbride a significant pause in doing it all over again. The flip side is that the XFL’s new owners may have different plans on who will lead New York this time around. Another critical factor is the league’s structure moving forward. The original plan to entice Head Coaches was to give them full power as General Manager.

However, suppose that XFL 3.0 decides to go against that particular setup. It’s possible that the league could decide to go with a more traditional franchise model, where the GM gets to hire their head coach. It may seem far-fetched, but the new owners may decide to go with a sexier option than Gilbride at the helm. Perhaps someone with more cache like a Rex Ryan. Ultimately, New York’s head coach will be the most significant selling point in the market.

A large part of the handiwork done in hiring the Guardians’ support staff was Kevin Gilbride. Many of these assistants are left in limbo with the XFL opting not to resume league play until 2022. The life of an assistant coach is a challenging one.  As a result, many of these great assistants like Cris Dishman will decide to move on to other ventures. There are families to feed and careers to continue. The option of waiting around for nearly two years will not suffice for most.

The early word is that team employee hires will not start until the early summer of 2021. Not only will the waiting game for former league employees be challenging to endure, but the reality is that the jobs they had might not be waiting there for them.

The toughest pill to swallow for the lifeblood of any football league. Many of the XFL players from the 2020 season have been down this road before. It’s a big reason for the recently formed United Football Players Association. The goal of the organization is to push for the best interests of football players outside the NFL.

Some former XFL players have made their way onto NFL rosters. However, hundreds of them did not. When it comes to the New York Guardians team that played earlier this season, the 2022 timeframe could impact how many of these players return. After all, even if a 2021 season were in the cards, any returning Guardian players would have had to compete with a new crop of NFL free agents and unsigned college players from the 2020 NFL Draft. Now that the spring of 2022 is the target date, The player pool will expand even further with players from next year’s NFL draft class and players that miss the cut on NFL rosters during the summer of 2021.

Getting back into the XFL will not be easy for Guardians players like RB Tim Cook, CB Jamar Summers, RB Darius Victor, and so many others like them. Not because of their individual talents but because of the increased competition for roster spots. Quarterback Luis Perez was a savior for the New York franchise this past season. He showed outstanding leadership and poise, putting the Guardians in playoff contention, but by next summer, a lot of what he did will be a distant memory. Perez could end up back in the league, but if New York has an entirely different coaching staff, the new leadership will likely go in another direction.

A 2021 season would have suggested that teams like New York retain their players’ rights from last season, but 2022 creates the real possibility that the teams will be starting over. A new commissioner could decide to implement an entirely new player allocation system. Like the coaches and other employees who took part in the XFL, players will need to look into different career options.

Because of the pandemic, options outside the NFL have dried up for players. Notwithstanding the suspension of the XFL until 2022. The CFL also canceled their season. They were thereby eliminating an immediate option for players. Hope may be on the way in the Spring League, which will play a four-week twelve game season, consisting of six teams. The league will take place in a bubble setting in San Antonio, beginning Tuesday, October 27th, right up until a championship game on Monday, Nov. 23rd. All the action will air on FS1, on Tuesday and Wednesday Nights.

Also, on the horizon in 2021 is the potential return of the CFL. It’s an option that a few New York Guardian players entertained when their season ended. Players like WR Mekale McKay, CB Ranthony Texada, and S AJ Hendy may end up back on CFL teams in 2021. The road back to the XFL could be entirely different for those who wore Guardian uniforms.

The best part about 2022 for the New York Guardians is the time it gives for the league to relocate where it will play. It’s no secret that the biggest flaw with the Guardians’ in 2020 was MetLife Stadium. Bigger wasn’t better for the XFL in it’s largest market. Notwithstanding, the monumental task of trying to fill an 80,000 seat stadium like MetLife. Or the appearance of 15,000 fans in that setting. The venue and costs involved were less than ideal for families to attend games. The price point was great for XFL games if you didn’t get killed by all the parking costs but the combination of travel and time of the year wasn’t.

There have been talks in the past of the Guardians franchise playing at Red Bull Arena instead of MetLife, and that would be a great alternative, but there’s another possibility in the cards.

With all due respect to the undefeated Buffalo Bills and the state of New Jersey. Sports fans in New York would love to see a pro football team play in their city, whether in Queens, the Bronx, Brooklyn, Staten Island, or even Long Island. Unfortunately, the options in the town are limited. However, it doesn’t mean that the XFL’s new owners can’t explore all the different possibilities. RedBird Capital and Gerry Cardinale have had a relationship and experience with the Yankees and the YES network. It doesn’t mean that the Guardians’ will necessarily host five games at Yankees Stadium, but experience in the market and these types of venues could help.

The dream is far-fetched but with a 2022 timeline. It gives XFL 3.0 time to explore all of their options. Because if the XFL is looking to ingratiate itself with New York City. Nothing would accomplish that more than the Guardians’ doing something that the Giants and Jets don’t (besides winning), and that’s playing in New York.

Back in early August, after the league was sold. XFL Co-Owner Dany Garcia talked about taking the time to reset and reassess. A 2022 season certainly gives the league’s new owners time to do precisely that. The reassess process is in full swing. For the New York Guardians, it appears that the new timeline may end up being a complete reset.

The truth is that as much as XFL supporters and its former employees wanted to see the league pick up right where they left off, it’s a different world now than the one that existed earlier this year. Time and circumstances could change what’s to come in the future.