Mueller and June Jones shared a vision, and worked closely together to build the winning team that was the 2020 Houston Roughnecks. 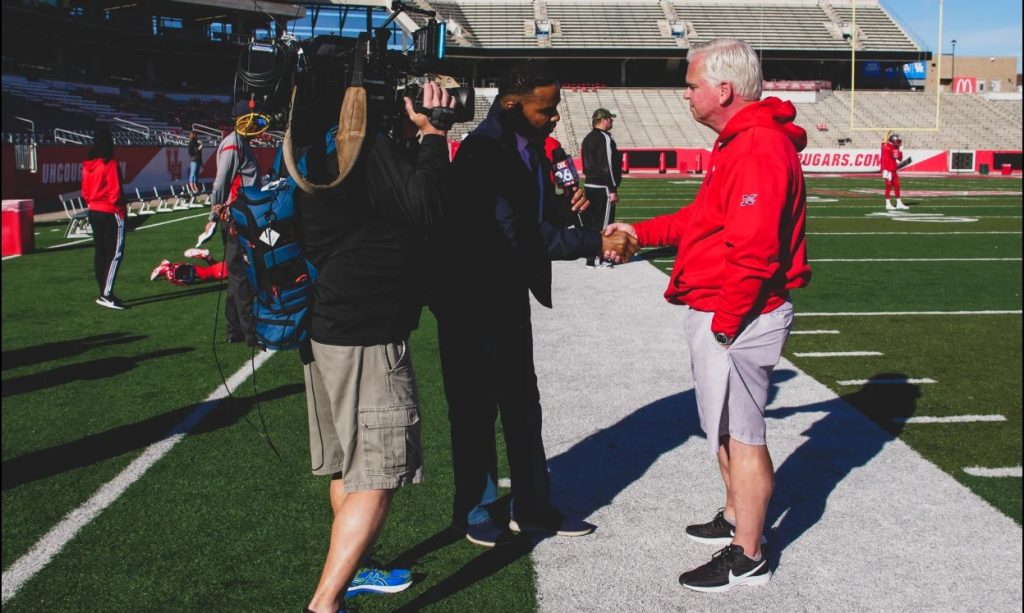 When talking to a football professional like Randy Mueller, you see all forty years of his football acumen on display.

Born and raised in the small logging town of St. Maries, Idaho, Mueller played quarterback at St. Maries High School before moving on to lead the Linfield College Wildcats in McMinnville, Oregon. In 1982, he led his team to the NAIA Division II national championship and was named the game’s MVP.

“I went to school at Linfield College in Oregon. I grew up in northern Idaho little logging town, St. Maries, Idaho, and those two places are near and dear to me,” Randy explained.

As for Linfield College, Mueller is proud of their success.

“That has been a very successful program for the last 60, I believe it’s 63 years. They’ve had a winning season every year, which leads all levels anywhere. So that’s a lot of winning. I’m proud to be associated with it,” he said.

Randy worked his way up in the football business, starting out in the front office of the Seattle Seahawks, and moving on as the general manager for the New Orleans Saints and the Miami Dolphins, and over to the front office of the Chargers for ten more years. More recently he was called upon to be the General Manager of the Alliance of American Football’s Salt Lake Stallions, and then as the Director of Pro Personnel for the Houston Roughnecks.

Mueller has been involved in plenty of football in his past, but it seems the positions he held with the Salt Lake Stallions of the AAF, and the Houston Roughnecks of the XFL were the opportunities that gave him the chance to build a team from scratch.

“That was a fun experience,” Mueller said of his time in Houston. “June Jones and I, obviously our head coach, had gone back probably 30 years of association. It was fun to find the players to fit the exact scheme that June and I envisioned for many years.”

It seems key that Mueller and Jones shared a vision, and worked closely together to build the winning team that was the 2020 Houston Roughnecks.

“I think the keys for us was finding guys to fit exactly what June wanted to do on offense, and on defense,” Mueller explained. “June Jones is a very underrated team builder, and a very underrated motivator and coach. He’s been successful at both the college and professional level, and I was very fortunate to be associated with him in this venture.”

As for star quarterback P.J. Walker, Mueller and Jones had targeted him as their starter from the very beginning. In fact, June Jones had been a fan of Walker since his team played against him at Temple, and Jones knew Walker would fit into his planned offensive scheme perfectly.

“He was our guy early on, and we were able to always have him at the top of our list,” Mueller said.

Sometimes, players just needed a bit of prompting to get onboard with the XFL. This was the case with James Butler, a talented running back who had been languishing on the Oakland Raiders practice squad, and getting very little playing time. Mueller knew that Butler would fit into June’s planned offense, and he convinced Butler to join the XFL, at least to get some “film.”

“We did a good job of putting those guys in positions to where their strengths could be accentuated,” Mueller said about Butler. “In James’s case, in a one back set with certain running skills involved, his skill set fit exactly with what June wanted him to do.”

Butler got his film. He excelled in June Jones’s offense, showcasing his explosive running talent. Becoming a fan favorite, in five games Butler averaged one touchdown per game as he rushed for 221 yards and four touchdowns, and caught 11 passes for 42 yards and an additional major.

We all know how good the 2020 Roughnecks were, especially with their 5-0 record when the league shut down. But, could they have gone all the way to the championship? Mueller feels they could have, but pointed out there was plenty of competition building within the league.

“There were other good teams in the league without a doubt,” Mueller said. “I think the St. Louis team from the east had done a really good job of acquiring players, and Jonathan Hayes putting that together with Trey Brown. It was a fun competitive league. I think we were just getting to the halfway point when we could actually get a little traction as to see who was going to be involved in a championship chase.”

As for the league having to shutdown due to the Coronavirus pandemic, Mueller referred to the fans, and how disheartening it must have been to the Roughneck’s growing fan base.

“Obviously, the fans in most areas were disheartened as well,” Mueller said. “We in Houston had a great environment where we averaged almost 20,000 fans per game, and it was fun. People would come out of the woodwork to come to these games, and showed passion. Football in Texas is a different world, and they were able to show it in the spring.”

Mueller feels the success of the league really opened some eyes, especially with the national TV contracts and the ratings the league received. He feels if the league was to come back, television would be the key to further success.

In a recent blog entry at MuellerFootball.com, Randy has pointed out there may be a broadcasting opportunity in the fall of 2020, especially with college football cancelling their seasons.

“If they could get their ducks lined up to even play later this fall, if they were able to bubble eight teams, which I think is a possibility.” Mueller pointed out.

However, Mueller made sure to say that he is not sure what the new owners will decide to do. He is sure they must have a plan, though.

“They bought it for a reason… because they think it’s a successful operation. And, and I’m sure they’re working hard to put some kind of plan in place,” he said.

As for returning to the Roughnecks and the XFL, Mueller said he would consider an offer to go back to Houston.

Mueller then went on to say that he probably would not pass up a chance to work with June Jones again.

“Yeah, without a doubt. Him (Jones) and I worked well together.”

We know… we know. The Houston Roughnecks’ success is a true testament to this.

Episode 33 – XFL has new owners! Guests: Randy Mueller, Greg Parks and Mike Mitchell
Rumors swirl, and Oliver Luck may not be back with the XFL