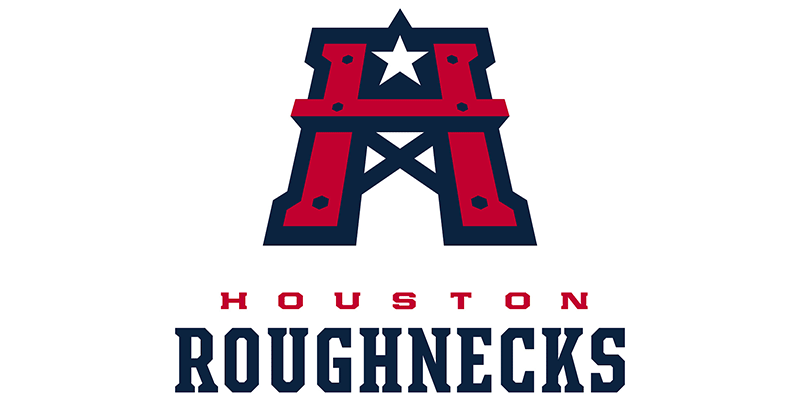 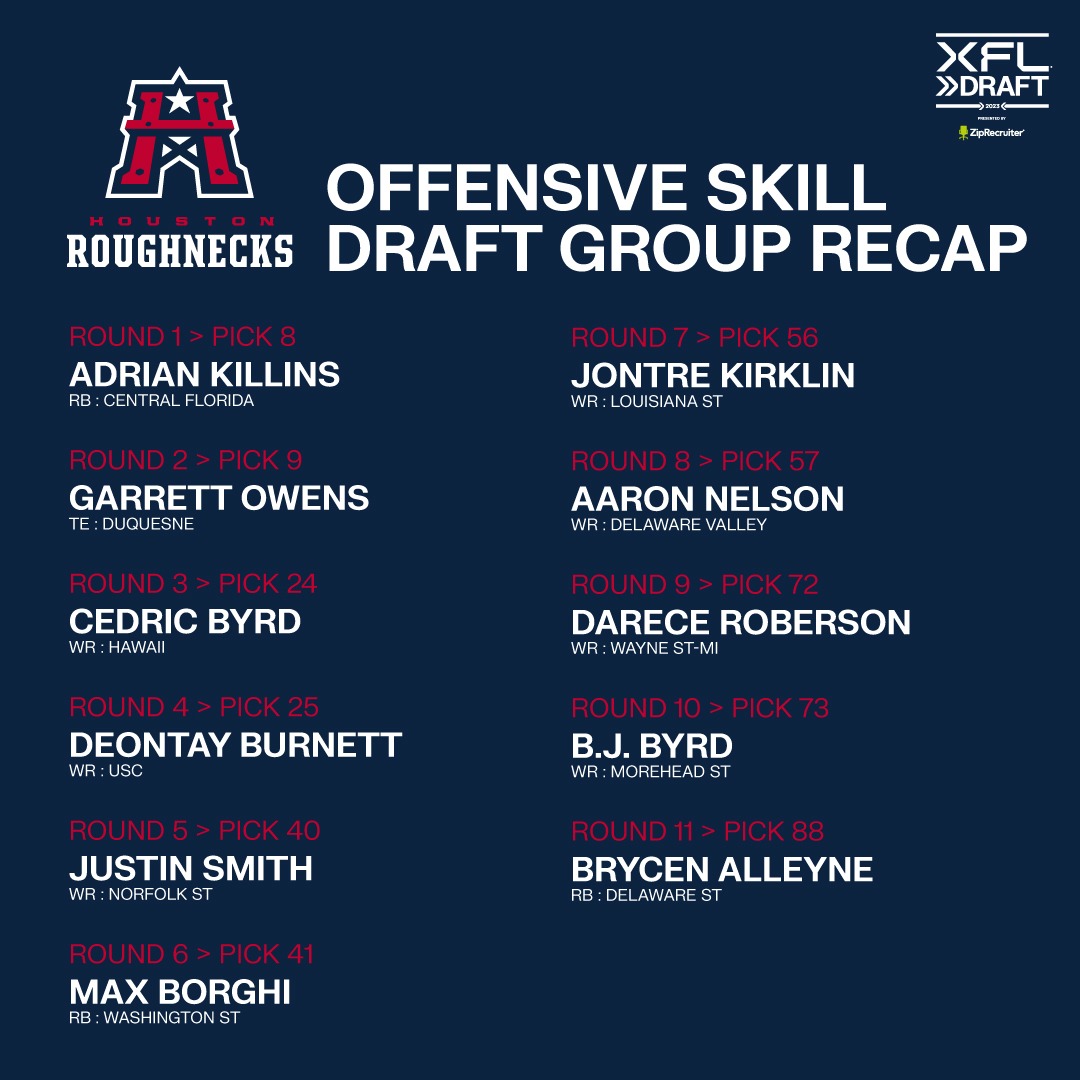 Houston has designs on being just as dynamic offensively in 2023 as they were in 2020. Only one tight end was selected and it was swiss army knife Garrett Owens, who will likely line up all over the offensive formation. Seven receivers were taken among the 11 picks, so expect a lot of three-and-four receiver sets from offensive coordinator AJ Smith. The three running backs selected are all 5’10” or shorter. Max Borghi comes from Washington State, a team that runs a similar wide-open style to what Houston will have. There won’t be any three yards and a cloud of dust here. 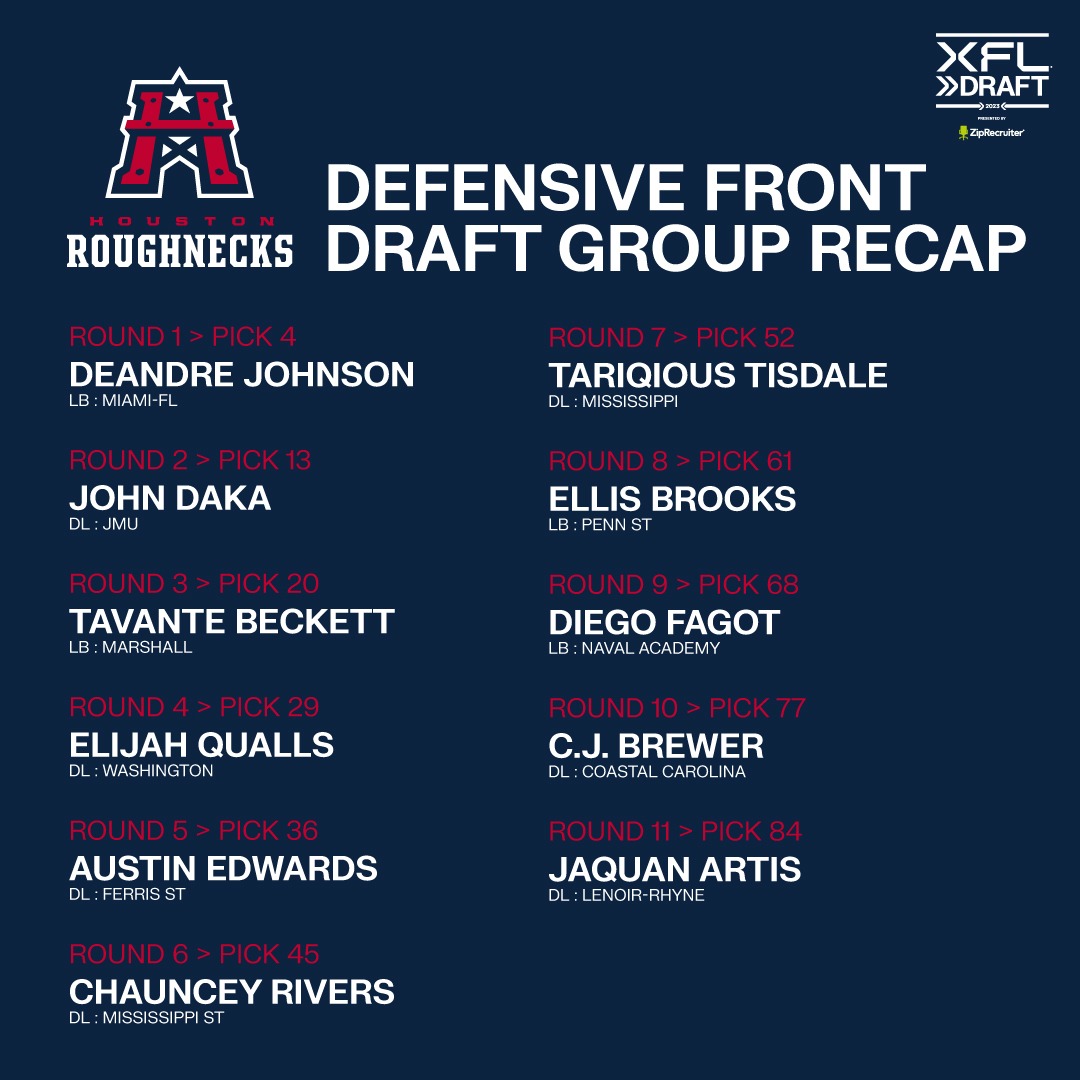 Houston went heavy on the defensive linemen, choosing seven of them. CJ Brewer and Elijah Qualls were the two true interior defensive linemen taken; Brewer has the distinction of being one of the very few players in this draft that suited up for an NFL regular season game in 2022. It’s a young linebacking corps, with three having signed as undrafted free agents from the 2022 rookie class; Tavante Beckett entered the NFL in 2021. It’s also noticeable that with the exception of the final pick, JaQuan Artis, all have spent time on NFL teams, even if just in training camp. 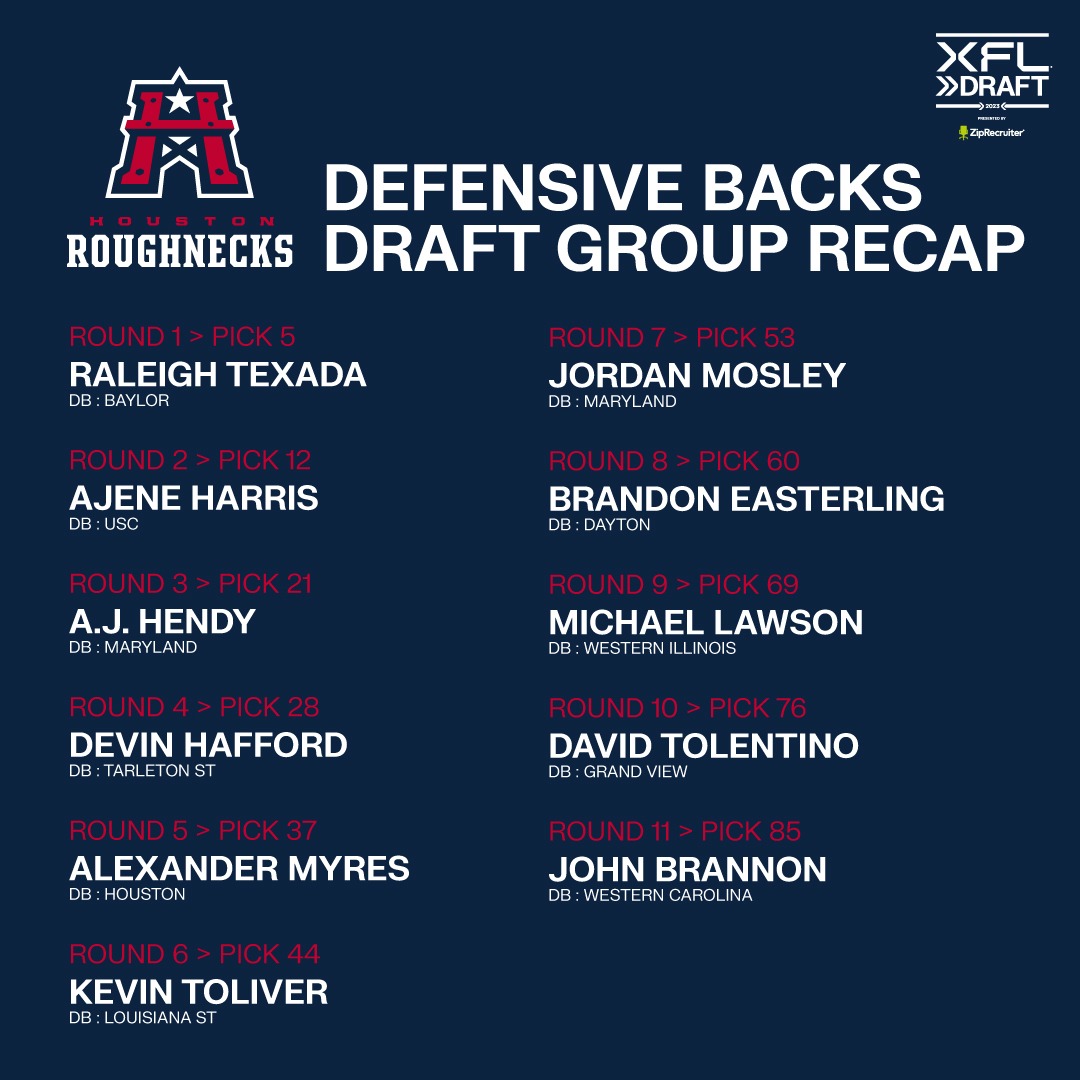 Once again, a premium has been placed on NFL experience with this group. Defensive backs coach Morgan Ford has a lot of talent with which to work. AJ Hendy started all five games for the New York Guardians in 2020 in one of the best defensive backfields in the league. He’s stayed in shape since then by playing in the CFL. This appears to be a more veteran position group than others, with several that graduated to the pros prior to 2020. 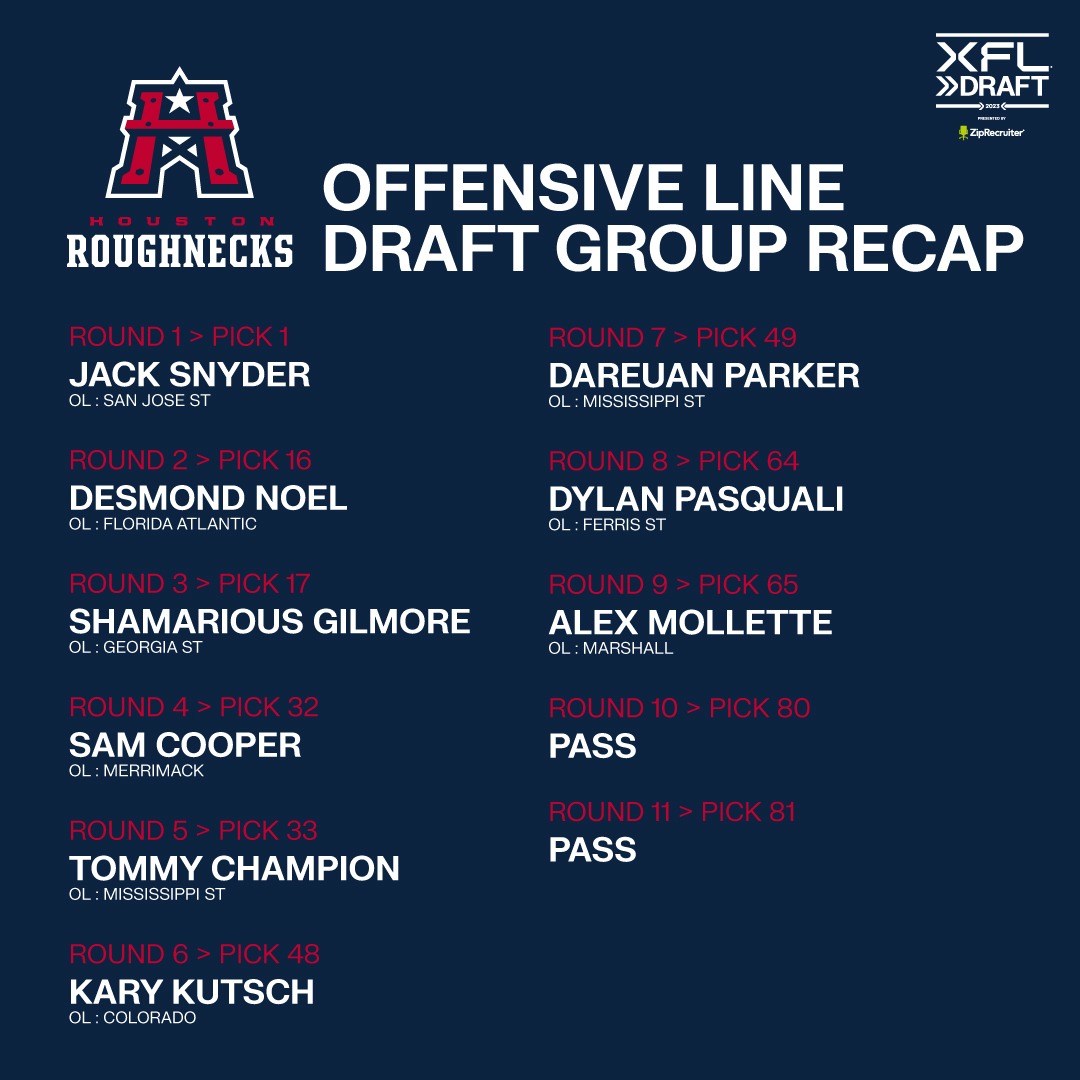 Houston had the first pick in this phase, and they took G Jack Snyder, a rookie out of San Jose State who went to camp with the LA Rams this summer. He should claim a starting spot in January. Kary Kutsch and Alex Mollete will likely compete for the center job, though both can also play elsewhere on the interior of the line. Houston went with big numbers at the guard position it appears, with only Tommy Champion a true offensive tackle. Expect offensive tackle to be a focus in the supplemental draft.

Greg McMahon is probably the most senior special teams coach in the league in terms of years in the NFL, so he assuredly knows what he’s looking for at the specialist positions. Brian Khoury is a talented snapper who was in the XFL in 2020, then spent time with the Baltimore Ravens and New England Patriots. Houston went with youth in its kicker and punter, both rookies.

Duke Ejiofor is the biggest name of the Open Phase, a former 6th round draft pick of the Houston Texans. The Roughnecks beefed up on linebackers by selecting four here out of their 11 picks. And of course, three more wide receivers.

Perhaps the biggest impact will come from their additional QB, Cole McDonald. McDonald attended the Hawaii Showcase this summer and was spotlighted briefly on the league’s Drive to the XFL Draft program on ESPN2. He also worked out at the NFL Alumni Academy. Kaleb Eleby and Brandon Silvers have their strengths, but in this offense, McDonald might be the straw that stirs the drink.

Best Pick: Max Borghi has excelled in this style of offense for Mike Leach at Washington State; he had 139 of his 156 collegiate receptions in the two years he played in Leach’s Air Raid.

Questionable Pick: Brandon Silvers as one of the assigned quarterbacks for this team leaves me scratching my head; his accuracy was scattershot three years ago. Has it improved since then?

Small School Stud: After playing four years at Division II Mercyhurst, Garrett Owens finished out his career at Duquesne. He averaged nearly 5.0 yards per carry, listed as a running back in college. So despite his tight end status, Houston will try to get the ball in his hands as creatively as possible.

Strongest Position Group: I like the linebackers Houston picked, which should make an old defensive coach like Wade Phillips smile.

Weakest Position Group: They threw a lot of numbers at the receiver position, but I don’t see many stand-outs among them. Perhaps in this offense, those stand-outs can be manufactured.

Key Connection: Stay with me here: Cole McDonald’s head coach at Hawaii was Nick Rolovich, who played quarterback (and was a student assistant under) June Jones. Jones is the mentor of AJ Smith, with Smith having been Jones’s wide receivers coach with the Roughnecks in 2020. Smith graduates to offensive coordinator in 2022, an will run a similar offense to what McDonald ran in college.