Two New York Guardians have made their way back to the NFL. For Jarron Jones and Anthony Coyle, it’s an opportunity made possible by the XFL. 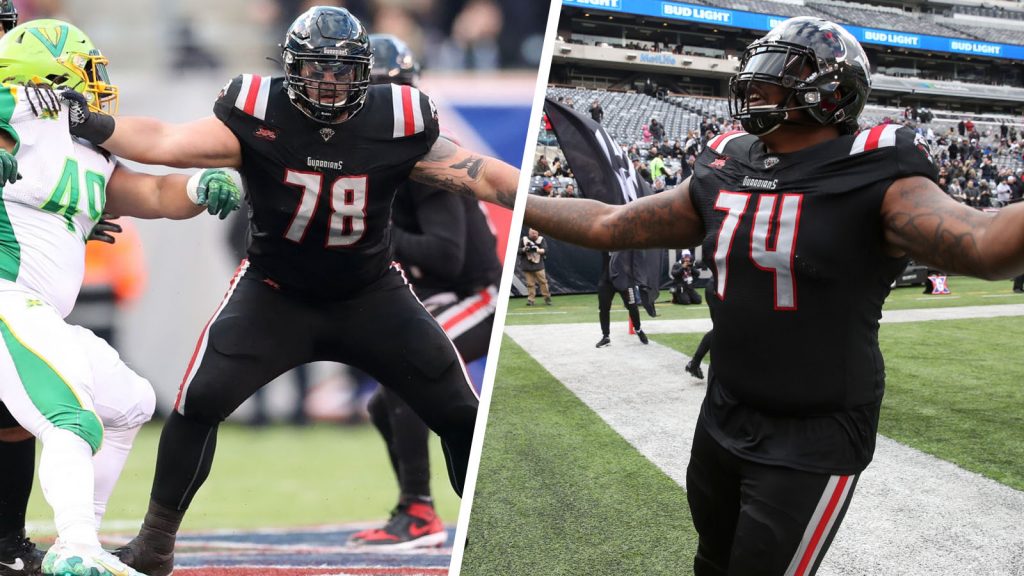 Two New York Guardians have made their way back to the NFL. For Jarron Jones and Anthony Coyle, it’s an opportunity made possible by the XFL.

In 2020, it wasn’t the XFL’s intention to be a developmental league for the NFL. Not by design anyway. However, the result is that 17 XFL players made the rosters of NFL teams. Two of those players were a part of the New York Guardians, and the league that they played for is directly responsible for them getting another shot.

New York Guardians Jarron Jones and Anthony Coyle are members of the Pittsburgh Steelers practice squad. In 2020, Jones and Coyle were two excellent starters on the Guardians’ offensive-line. As a result, it’s easy to see why one of their former coaches sees the pitfalls in losing them.

After the #Steelers signed @XFLGuardians Offensive Linemen @who_gotjones94 and @acoyle77 to their initial practice squad.

I reached out to tell an unnamed Guardians coach how great it was.

“We went deeper in the XFL players because when we thought about the college free agents, we knew less about them because we didn’t have pro days, didn’t have physicals. The XFL players were more NFL-ready, so that was the one thing we did differently.” – Steelers GM Kevin Colbert on his talent evaluation process in the offseason. https://www.theringer.com/2020/9/8/21426905/ben-roethlisberger-pittsburgh-steelers-offensive-revival

The majority of NFL General Managers didn’t take Colbert’s approach. However, if they had, the number of XFL players signed by NFL teams this past spring would’ve been more extensive.

Let’s take a look at the unique journey of the two New York Guardians who’ve made their way back to the NFL.

The Steelers are Jones 8th NFL team. At 26 years of age, Jones has been on eight NFL teams. All totaled, Jones has had nine stints with eight different NFL teams.

The team history for Jarron Jones reads like this. (Giants, Seahawks, Cowboys, Giants, Bucs, Washington, Lions, Bills, New York Guardians, and now the Steelers). Jones is the textbook definition of a developmental player. A former high school OT who transitioned to defensive tackle at Notre Dame, and then back to the offensive line in the NFL.

From 2017-2019, Jarron Jones was on five NFL practice squads and cut nine different times. In August of 2019, Jones’s roster roller coaster ended in Buffalo. The XFL comes calling, and two months later, Jones is selected by the New York Guardians first-round in their offensive line draft.

Jarron Jones is back in the NFL because of the XFL. With the Guardians, Jones finally received an opportunity to play, and he produced at a high level.  In conclusion, Jarron Jones’s last shot to stick on an NFL team has arrived.

The former Tottenville High School product out of Staten Island. Anthony Coyle was first-team All-Patriot League at Fordham before going undrafted in 2018. At only 23 years of age, Coyle had three stints with NFL teams before joining the XFL. Two of those NFL stops were on the practice squads of the Packers and Falcons.

With the New York Guardians, Coyle ranked as one of the league’s highest-rated interior players. One of the knocks against Coyle in the past was his undisciplined play style. However, in the XFL, with aid from coaches like Ronnie Vinklarek, Coyle cut down on his mental errors and started to grow as a player. Coyle was named to the Midseason All-XFL Team before the season ended abruptly back in March.

The playing time Coyle earned in the XFL was invaluable for him. Like Jones, Coyle is in a position to break through that glass ceiling because of it.

In some respects, Jarron Jones and Anthony Coyle are right back where they started, on practice squads looking to play. But in the NFL, there’s no guarantee that you are going to get another chance. The XFL guaranteed them that opportunity.