Andrew Verboys football career is a unique and interesting story that showcases how he can run with the best and learn on the fly. 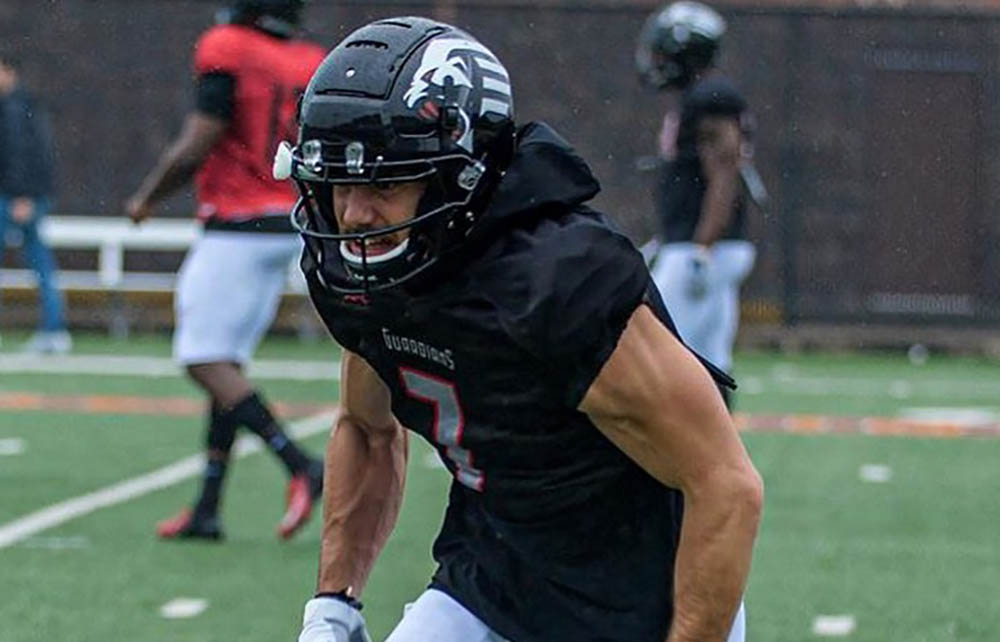 Andrew Verboys football career is a unique and interesting story that showcases how he can run with the best and learn on the fly.

Verboys attended Delaware University as a Blue Hen.  He actually made the transition from quarterback to wide receiver in college.  That gives him a unique advantage over his opposition.

“I would say it for sure gives me an advantage, Verboys pointed out. “When you’re a QB you have to be aware of everyone on the field at all times and you have to know the details of everybody’s assignments. You also have to be aware of every situation going on. As a QB you run the show, you are in charge of how the offense operates. The QB position makes you think way more. Being able to see a game from a QB view but play as a WR helps a lot. I can read defenses quicker, I can anticipate where the QB would want me versus certain looks, I can pick up a playbook quickly, knowing multiple receiver positions, which makes you more versatile. Knowing little details like that can only help in my opinion. Having a full understanding of the game from learning that, as a QB is a huge advantage now as a WR.” 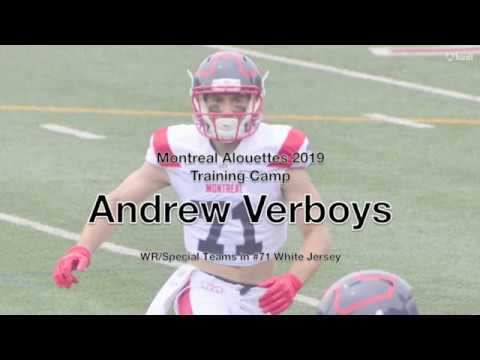 After his time as a Blue Hen, Verboys pursued the CFL signing with the Montreal Alouettes in training camp and preseason. That preseason game features one of his favorite memories of his football journey so far.

“My favorite football memory is a toss up either between my first preseason game when I was with the Montreal Alouettes or when I signed with the NY Guardians,” Andrew recalled. “For Montreal, my whole family and my girlfriend took off of work and school to drive up to Canada to watch me play in that game. Getting to see them all after a good game and a good but long camp was pretty special. And when I got signed to the NY Guardians, I was an underdog story to get signed being brought in late, as a body for mini camp. I put everything I had into that last week of practice to get an opportunity to get signed. I felt like when I signed all the hard work and hours I put into this game really paid off and that’s the best feeling to have because that feeling is hard to come by in this business.”

Gearing up for the Guardians

Verboys started out his XFL journey like many players at tryouts that were held all around the country.

“To try out for the XFL was great. I got invited to the Washington D.C. showcase as a late add on and that is where I really got on teams’ boards. It is what got my name out there and known by XFL teams. At these tryouts, you always have to do something to open up eyes and flash if you want to be seen, especially since there are so many great players at the tryouts. I was fortunate that day to run the showcase’s fastest L-Drill at 6.78 and put together a good workout overall to get noticed by some teams,” Verboys remembered.

Verboys had a great tryout as the stats tell the tale. Speed kills, and when Verboys gets a chance to make a move he shows the speed.

Near the end of mini-camp, the New York Guardians signed Verboys to the team.

“So with NY, I was brought in for their last week of mini camp because the WR room was depleted with injuries. I was told I was going to be released after the last week of mini camp. I had 5 days, and 3 practices to learn their whole playbook and prove to them that I could play. I barely slept that week, I was up all night every night studying so I could not only go out and operate in practice but make plays as well. I poured everything I had into making a strong impression to the NY staff and front office that week. After the last practice I was called into the office and I was told they were going to sign me to a contract and bring me to training camp. Out of all the sports moments of my entire life, this is the moment I’m most proud of probably because I overcame the odds to fulfill a dream of mine of getting an opportunity to play professional football,” Verboys shared.

Great opportunities as a Guardian

Verboys is from New York so that was a great opportunity for his time as a Guardian. He played with tons of heart and hustle, and should be seen as a great candidate for any future team. Verboys would also spend time with the XFL’s Team 9.

“It was awesome to play as a Guardian, probably the most fun I have ever had playing football. From my teammates to the coaches we had, it was all just a good fit and something I really enjoyed. On top of all that, playing as a Guardian came with me getting an opportunity to play professional football in my home state, New York. So to get the opportunity to play professional football, when a lot of people doubted that would ever happen, and then to do it in my home state, that was a dream come true for me,” Verboys said.

Back to the Underdog story

That alone shows the heart that Verboys has. There are not many other players up all night studying film then going out to practice and leaving it all on the field. That just goes to show how much Verboys loves the game. He truly wants this more than the next player. He has always been a player that has flown under the radar. He embraces the underdog role.

As he said earlier about his underdog story being brought in late to camp in New York, that is a story that really is motivational. There is not a good reason for Verboys not being a professional squad right now, the heart that he has cannot be matched and he has heart.

Even during pregame Verboys stays locked in on being his best.

“I usually stay pretty reserved pre-game,” Verboys explained. “I like to get in my own zone with my own routine to get ready to play a game. I like to go through the call sheet of all the plays multiple times to go over all my assignments and reads. I listen to my music. I eat a good pre-game meal. Then I head out to the field and do my dynamic warm-up and activation, get a couple of stationary catches in from all angles, then do some footwork drills I like to do before I run routes and then I usually run a couple of simple routes for the QB before I head in and start getting ready with the rest of the team. By the time kick-off comes I cant wait to just play already.”

These days, Verboys is chasing the dream as much as ever, which includes training multiple times a week with high-level players including former New England Patriot quarterback Brian Lewerke.

“Currently I’ve been staying ready by following a strict training regiment I put together with my trainers. We wanted something that keeps me in peak playing shape but also doesn’t kill my body too much so if I were to get a call to work out for an NFL team, I would still be fresh. My strength coach Eric Grantham from Game Changer Performance put together an in-season, 3-day lifting program for me. I lift Monday, Wednesday, and Friday. Then also on Monday, Wednesday and Friday I work with my track coach, Dom Zanot from Athletics Westchester, for speed and conditioning work to stay in peak form but also work on speed mechanics, because that is something that can always be enhanced. Tuesday and Thursday morning I do a recovery movement workout, then head to the field in the afternoon where I work on my route running, My dad is a coach so he helps me with my position work. And then every day for 30 minutes I will go through a series of ball drills for my hand-eye coordination. I am routine-oriented and very detailed with my work and I have found this schedule works best for me, I couldn’t have put together this type of program without all the help from everyone involved,” Verboys shared his regimen.

Verboys is staying ready, staying strong, and doing it successfully. He shows how much he really wants his pro football dream to come true. Unsure how many other players will go out as often and with such a diverse, strict workout and agility regimen. It is just amazing to see how delved into his craft he is.

Watching the best to be the best

The former Guardian watches Julian Edelman to help his craft. In fact, Edelman also played quarterback before switching to a receiver.

“I watch a lot of film on Julian Edelman. I try to model my game after him, the routes he runs, and the footwork’s he uses to create separation, the way he catches in traffic, and then what he does after the catch.” Verboys said, “It is all stuff that is admirable about his game that I try to translate to my game. He is reliable and tough and those are two traits that a slot receiver must-have.”

It could be awesome to watch Verboys play as an Edelman style player in the slot or even toss him in as a wildcat sometimes and let him sling it or take it on the run.

If the time is right

The journey continues for Verboys, he had a great time in the XFL and showed that being an underdog fuels him and prides himself on it. A big reason the XFL is successful is because of the players like Verboys.

“If the time is right and the opportunity presents itself, I would love to play in the XFL again, Verboys offered. “It is such a great league, especially for players that have a great underdog story or an unknown story. Guys who are good at what they do but for whatever reason, have not gotten a shot at the next level. I have always identified myself as one of those players so an opportunity is something I would be grateful for, as always.”