XFL Dragon Dunn gets it done for Cleveland

Dunn would finish last night’s game with a PFF grade of an 81.0, ranking him fourth-best among every Browns offensive player. 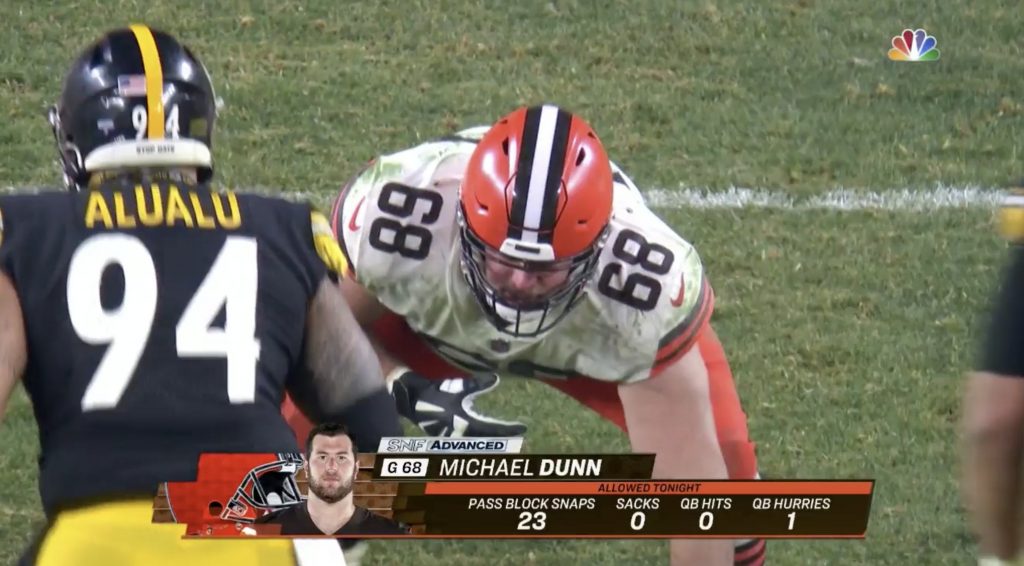 The former Seattle Dragons left tackle and right guard, Michael Dunn saw action last night at left guard when the Cleveland Browns took on the Pittsburgh Steelers in the wild card game. The Browns triumphed over the Steelers and quarterback Ben Roethlisberger for just the third time since 2003 in Pittsburgh.

What a road for our guy Michael Dunn:

Dunn would eventually suffer an injury late in the game, but he walked off the field and it did not appear to be outstanding. He was slated as questionable to come back in the game. Next week we definitely should have a chance to see the former Dragon put on a show once again.

Prior to last night’s game in Pittsburgh, Dunn had quite the story. He was in the 2017 NFL Draft class where he would go undrafted, with no chances until later on when The Los Angeles Rams would sign him just to be cut, then the same story with the Jacksonville Jaguars. In 2019 he signed with the AAF to play with the Birmingham Iron then after the AAF folded, Dunn signed to the Dragons and played well. He would be ranked as the second-highest graded lineman behind only starting lineman for the Los Angeles Chargers, Storm Norton.

After the XFL, Dunn would attend training camp with the Cleveland Browns only to be cut, and signed to the practice squad. Just a few days before Christmas, he would be elevated to the active 53 man roster making a start in the NFL playoffs.

The story that Dunn has is just so motivational that you can’t help but root for him. Dunn faced the adversity and never gave up, he just let it make him invigorated to make his dreams a reality which is what he is doing right now. On Twitter during the game, quite a few Browns fans or ‘The Dawg Pound’ was posting about how proud and impressed they were of Dunn. Keep in mind the Browns have not made the playoffs since 2002. These fans wanted good football, and even good lineman. They have gotten what they wished for.

Dunn shines when it matters

Dunn would finish last night’s game with a PFF grade of an 81.0, ranking him fourth-best among every Browns offensive player. The 81.0 would rank him sixth among every offensive lineman who played during Wild Card weekend.

The Cleveland Browns quarterback Baker Mayfield was not sacked a single time last night. Dunn would aid Mayfield in his 263 yard, three-touchdown game. The Steelers are one of the top 5 blitz defenses in all of the NFL, with guys like TJ Watt, Stephen Tuitt, and Tyson Alualu trying to get past you every snap, it is not an easy task to take on.

The 6’5, 300lbs lineman certainly should have a contract from the Browns this offseason. Dunn is the prototypical size to succeed and even dominate in this league. The XFL helped him figure out who he was, and led to him becoming one of the most successful linemen in the entire league.

Lineman do not get the respect they deserve for the dirty grind they put in every single snap in the trenches. A couple of dozen linemen withdrew themselves from the NFL season back in August, and Dunn did not step down. He stepped up and took the opportunity by storm to prove why he is hungry, motivated, and dangerous.

Hopefully, Dunn’s injury is only a stinger, or something minor, so we can see him have potentially another opportunity in the divisional round of the NFL playoffs next weekend where his Cleveland Browns will take on the best team in football, the Kansas City Chiefs and a very dangerous quarterback Patrick Mahomes. The Browns play at 3:15 pm ET on Sunday in Kansas City, MO.