“I’m driven to becoming and force at tight end in the NFL, and won’t stop until I’m there.” 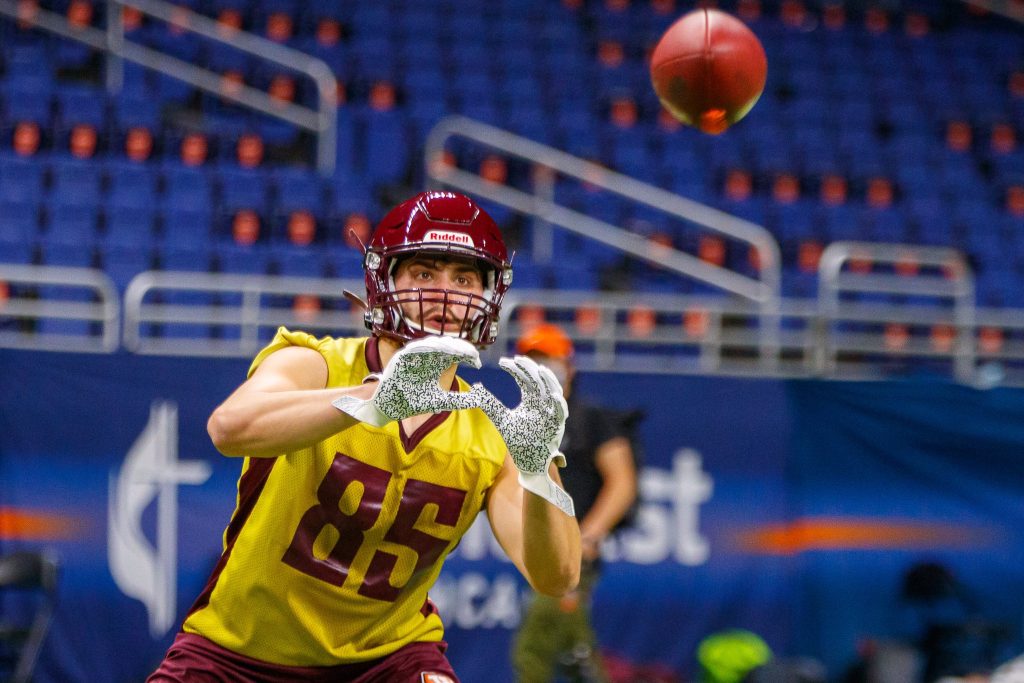 Ex-DC Defenders tight end Dimitrios Tsesmetzis breaks the mold. Standing at 6’7, Tsesmetzis played a season of college basketball at Western Connecticut State, showing he can be great on both the court and the gridiron.

Charging in as a Colonial

A little game film of @Dimitrioss_ tight end for the #XFL @XFLDefenders. Just goes to show what height differential can do for your football game. pic.twitter.com/snHm7jepyX

As a Western Connecticut State Colonial, a Division III program, Tsesmetzis showed he can play with a full heart and full speed.

“From playing at a D3 school to playing professional football has definitely made me more hungry. This is because by playing D3, you don’t get much exposure in the professional scene. I was not even half the athlete I am today when I was in college. I took a huge turnaround physically and especially mentally. I’m driven to becoming and force at tight end in the NFL and won’t stop until I’m there,” Tsesmetzis said.

Tsesmetzis realized during college that playing professional football was his goal and dream. He would not stop until he got there, and when there he would show how much he wants it.

His first professional opportunity was with the San Diego Fleet of the now-defunct Alliance of American Football.

Digging in as a Defender

During the open phase of the XFL Draft, Tsesmetzis heard his name called by the DC Defenders.

“It was an awesome feeling being drafted by the Defenders and getting a huge opportunity to take the next step in my professional football career,” Tsesmetzis recalled.

He would have a great time playing as a Defender when he had the opportunity.

“I was with the Defenders for mini camp and training camp and it was an amazing experience. Everyone, including the coaching staff, were great people that I was easily able to bond with. I learned a lot from the coaches and especially players who have given me insight about things on and off the field for greater success,” Tsesmetzis remembered.

As he said, a lot of things were learned during camp and he came out being better football player.

“I learned in the XFL that it doesn’t matter where you come from, it matters how much work and dedication you put in each day to become better than yourself yesterday. When you’re competing on the field or in anything in life, I learned that you compete against yourself and not the other person. Fight the battle with self and growth with be upon you,” Tsesmetzis said.

Tsesmetzis has one of the best attitudes that you will find in a football player. He is a quiet grinder that knows what it takes to succeed.

Lastly, his time in DC had a lot of great memories, but he said, “[my] favorite memory was in mini camp when we would compete at the end of practice with sled races and sand bags carries.”

His time in DC would lead to him signing with the National Arena League Tampa Bay Tornadoes.

Staying sharp in The Spring League

“By playing in The Spring League, I improved by picking my coaches and teammates brains and finding new techniques as I go. It also gave me an opportunity to show and test myself as I have grown a huge amount each month,” Tsesmetzis said.

Many talented players and coaches played for his Conquerors, including former Tampa Bay Vipers coach Jerry Glanville who led the Conquerors as head coach.

Tsesmetzis is staying ready for all professional opportunities that could come his way.

“I’m staying ready by training my mind and body each day at EPI Centre. Also, yoga and football IQ studying are mixed in to stay clear and focused,” Tsesmetzis shared.

One of the unique things that he focuses on is football IQ studying. That is one of the most underrated things to delve into. If you can read the defense and tell what they are going to do, that opens up tons of holes to run for daylight.

To stay ready, the former Defender also watches a lot of film of some of the NFL’s best tight ends.

“Tony Gonzalez, George Kittle, and Travis Kelce. Tony Gonzalez mainly because of his quickness in the trenches and amazing hands. Also, his personality and values off the field inspire me,” Tsesmetzis says.

Staying locked in is also what Tsesmetzis does even the night before a game.

“The night before I imagine success on the field. On my way to the stadium, I talk to all my family and friends and soak in all the good energy from them while listening to music to keep myself focused.” Tsesmetzis shared.

As of right now, Tsesmetzis is currently a free agent. Hopefully, an NFL team will give him a chance, but if things do not go as planned Tsesmetzis would tear up an arena football league.

“If I do not get an opportunity by then, I will definitely play in the XFL,” Tsesmetzis said, eluding to the 2022 XFL season.

Potentially it could be a great opportunity to go to the arena league and show how much of a beast he is.

Ernesto Lacayo, kicker of the Seattle Dragons is a prime example of an elite arena player that put his skill to test in the XFL. The field is smaller and narrower in the arena leagues, the majority of players always say how much it helped them morph into an even more skilled player.

Tsesmetzis should be seen as an elite free-agent tight end to any team that needs a tall, strong, explosive player. Through his size and athleticism, he should be given a longer chance to show what he is capable of because he has so much in the tank and a fire burning inside.

If the time is right, it would certainly be a treat to see Tsesmetzis back in the XFL in 2022.