Landry Jones and Josh Johnson made their highly anticipated XFL debuts as the Dallas Renegades defeated the LA Wildcats 25-18. 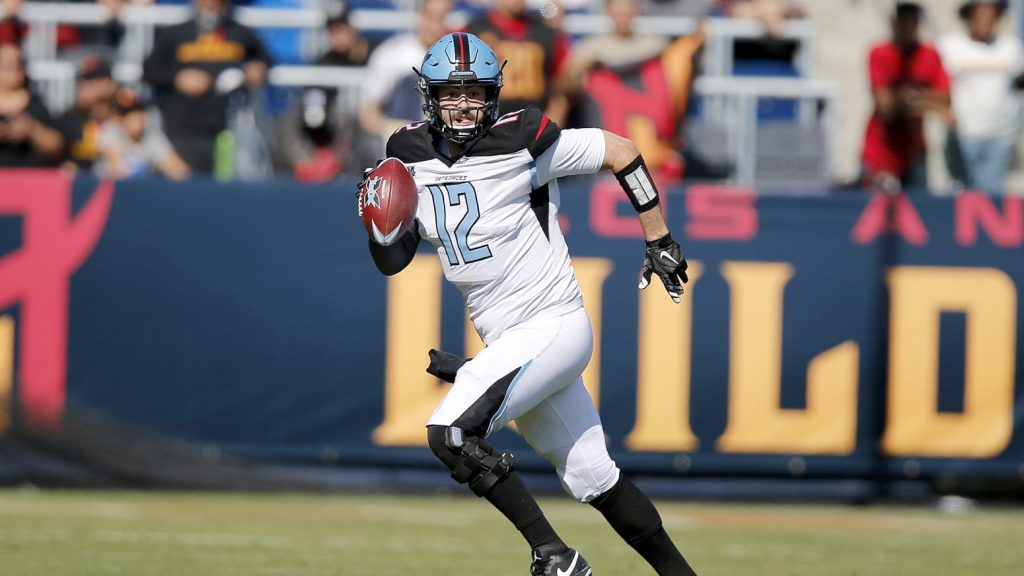 It was the much anticipated debut of the XFL’s first signing Landry Jones as he and head coach Bob Stoops were together for the first time since 2012. After over 770 days removed from being on the football field, Landry Jones led the Dallas Renegades to their first win of the season as they defeated the LA Wildcats 25-18.

Everyone was excited to see what Landry Jones would look like being the poster boy of the league back in August. There can be some arguments that his performance on the field was up and down. The offense for Dallas looked much better passing the ball as Jones was more willing to throw it deep and make some plays down the field. Unfortunately for Jones and the Renegades, that meant turnovers. He threw two interceptions in the game that both looked ugly.

Despite some inconsistencies, Jones still made some nice throws down the field as he was able to hit Joshua Crockett on a nice 39 yard pass down the field and hit Donald Parham on some nice routes past ten yards as well. His throws looked and felt better than Philip Nelson’s throws in week one. He was confident in the pocket even if he had a lot of pressure put on him all game long. He showed audiences that he had full control of the offense, but even Jones would admit that he wasn’t all that impressed with his performance.

“Let’s call a spade a spade. You know what I mean? Let’s not sugarcoat things. That’s the only way you’re going to play better,” Jones said. “We play in a public arena for all the world to watch so it’s not a secret I didn’t play very good today.”

Jones finished the game 28-40, 305 yards with one touchdown and two interceptions. The 305 yards makes Jones the first quarterback in the XFL season to throw for over 300 yards in a game.

The most impressive part of Jones’ performance was more about how he handled the off the field interviews. Numerous times during the broadcast on ESPN, he was interviewed about his interceptions and missed opportunities. Instead of taking it the Matt McGloin route and talk down on his teammates and coaches’ game plan, Jones kept taking the blame. He continued to talk about how he needs to improve and no one else.

“It’s the same story over, and over again,” Jones said after he threw his second interception of the game. “I need to make throws.”

His composure and leadership showed XFL fans why he was the first player signed to the league and why he’s a starting quarterback. While fans hope his play gets better (which it should), his words spoke louder and impressed many. It should be a sign of good things to come for Dallas this season.

Landry Jones overshadowed the XFL debut of another former NFL quarterback in Josh Johnson. After being out for week one due to an injury, Johnson seemed to have recovered nicely from his injury as many would say he outperformed Jones in some aspects of the game. He seemed calm, cool and collected in the pocket as pressure didn’t seem to rattle him very much.

Johnson’s ability to hit receivers in stride was impressive to watch. While he’s known for being a mobile quarterback, viewers saw more of a pocket quarterback in the game. Credit needs to be given to the offensive line for giving Johnson plenty of time in the pocket. It’s pretty clear that Johnson and Nelson Spruce will be a dynamic QB-WR combo as they connected twice for scores. They should cause a lot of trouble for defenses all season long.

The lack of a consistent running game might have effected Johnson’s performance a bit. Elijah Hood broke off a couple of nice runs, but nothing that would make the Renegades’ defense scared of stopping the run. Johnson never really showed off his scrambling abilities as much either as that might be something the Wildcats and offensive coordinator Norm Chow can think about utilizing this season.

Both teams through three quarters had trouble protecting the football. It became a big problem as Dallas was lucky it didn’t cost them the game. Typically, whoever wins the turnover battle comes out on top in the game. Not this time around. Landry Jones threw two critical interceptions while his tight end Sean Price fumbled that gave LA the ball back. The Wildcats had their chances in the red zone, but two of the times they were within the ten yard line they fumbled the ball and lost it to Dallas. Those were points taken off the board. The argument can be made that it cost them the game.

Week one’s performance against the St. Louis BattleHawks is one that Cameron Artis-Payne would like to forget about. He wasn’t able to produce a single rushing yard in the game and eventually was replaced mostly by Lance Dunbar. Artis-Payne came back stronger and had the best single game rushing performances of the young XFL season. He came one yard shy of hitting the 100 yard mark and ran in two touchdowns.

The running game for Dallas was stalled out for the first three quarters of the game. The fourth quarter was a whole different story as Dunbar and Artis-Payne had their way with the Wildcats defense. The Renegades seemed to have moved away from the passing game and relied on their running game to bring them home. It could be a strategy that the team uses more often throughout the year. The plan was to pass the ball 60 percent of the time in a game, but with the running game picking up steam, a whole new game plan might be in place heading into week three.