It is great to see how much the XFL has helped players like Thompson have a chance to go professional. 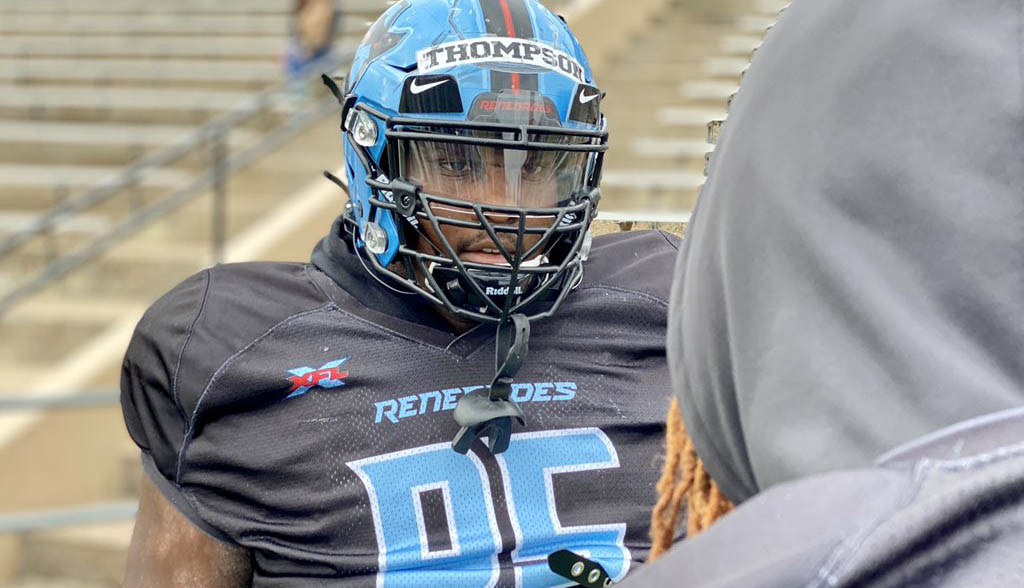 Tyrell Thompson of the Dallas Renegades started his college football journey at the junior college level, then made it up to the then Division II Tarleton State, who are now a Division I independent.

Being at a small school like Tarleton State did not hinder Thompson’s mindset of becoming the best that he could possibly be. In fact, it made him even hungrier to prove why he should be at the next level.

“Coming from a D2 (now D1 Independent) I was definitely hungry. I knew the challenge was going to be tough but the opportunity was there. I just had to take advantage of it,” Thompson said. “There’s a lot of talent in the Lone Star Conference and in D2 football. I really hope more and more professional organizations take notice.”

Thompson lit it up during his time at Tarleton as a Texan. In his two years there, he played 24 games tallying, 103 tackles, 20 tackles for loss, 8.5 sacks, and three forced fumbles. As his stats tell the story he is a very physical and powerful player, which would lead to his first NFL opportunity.

Revving it up as a Ram

TYRELL THOMPSON from the LSC Champs to the NFC Champs!

Tyrell Thompson will sign a UFA contract with the Los Angeles Rams pic.twitter.com/QnqLQg37iJ

Thompson would go undrafted but that did not matter. He stayed focused on his goal of having a pro football opportunity.

“Signing with the Rams was a dream come true. Throughout the draft process, I had many teams talk with me but in my heart, I knew LA is where I wanted to be and with God’s will I made it. I’m so thankful for that opportunity,”  Thompson recalled.

He would stay with the Los Angeles Rams through rookie mini-camp, before his time would be cut short in June 2018.

Revenge as a Renegade

We’ve got another #XFLdraft pick! Tyrell Thompson has been selected by the Dallas Renegades, joining former Texan Dashaun Phillips on the @XFLRenegades pic.twitter.com/wqBoAOLogK

Thompson would hear his name called by the Dallas Renegades during the open phase of the XFL Draft.

“Signing with the Renegades was a blessing,” Thompson stated. “I always wanted to play for coach Stoops as well as Coach Jeffcoat both since they were at Oklahoma and Colorado respectively. Finally getting that opportunity I was fired up and ready to hit the ground running.”

Surely, as Thompson said, he was ‘fired up and ready.’ He looked great throughout all portions of camp and at the time his number was called as a Renegade.

“Being a Dallas Renegade was truly an honor. The fans, the coaches, the front office, the other players. From top to bottom a world-class organization. Can’t wait to get back.” Thompson said.

Thompson enjoyed gamedays as a Renegade, and he had a specific way of preparing for battle.

“I’m very different when it comes to game day routine. I wake up, say my prayers, call my family, get some food and relax, watch a little film on my phone, and just sit in the moment and be thankful I’m able to play this game once again. Once I get to the stadium I like to walk the field for about 20-30 minutes just getting a feel for the playing surface and imagine myself making plays. Once back in the locker room I get taped, dressed, and ready to say another quick prayer, then flip the switch because it’s game time!” Thompson said.

Thank you @xfl2020 & @XFLRenegades for the opportunity and amazing experience pic.twitter.com/ZaJuGLQ2Wg

Thompson would stay a Renegade until the season came to a close, but he had a great experience and was able to get more film to help his career.

“Being a Dallas Renegade was truly an honor.” Thompson said, “The fans, the coaches, the front office, the other players. From top to bottom a world-class organization can’t wait to get back.”

Like many, no one saw COVID coming and ending the season but Thompson used it to be more thankful.

“The XFL taught me to really cherish and love the game. It can all be gone in the blink of an eye,” Thompson said. “I know none of us saw COVID coming and impacting our season the way it did and yeah it sucked but in a way, it was a learning experience.”

Ready for what is next

Thompson used his XFL time to prove why he should be playing professionally. This upcoming season he will be joining fellow, XFL player Ernesto Lacayo in the Indoor Football League.

“I’d come back to the XFL tomorrow if they called me. I’m so excited for 2022 it just can’t come fast enough. I’m currently signed with the Frisco Fighters in the IFL and there are some former Renegades on that team as well. Seeing these guys in meetings and out at practice will not only make us better players but keep that relationship going for when the XFL comes calling again, if we’re not all back in the NFL by then.”

It is great to see how much the XFL has helped players like Thompson have a chance to go professional. All the opportunities it opened up may even make the XFL in 2022 an even hungrier breed of players.

Thompson knows his next opportunity could just be moments away in these times. So he has a strict regime to stay ready and prepared.

“I work out four times a week with Saturday being my heavy yoga/rehab day,” Thompson shared. “Being a professional athlete is a full-time job whether you’re in season offseason on a team or not. Have to be ready at all times.”

Being inspired to keep pushing is just as much of the battle as being physical. Thompson has a few NFL players that he enjoys watching to craft his own game.

“I mostly model my pass rush skills off Aaron Donald like every other defensive lineman but he does things that are unimaginable but I love watching how technical he is. I like to compare myself to Gerald McCoy honestly. We have the same body type and we play the exact same across the defensive line.” Thompson said.

The 6’4, 290 lb frame of Thompson is par with the NFL players that inspired him. He plays hard, fast, and physical, and will be a fun player to watch in the upcoming IFL season for the Frisco Fighters.