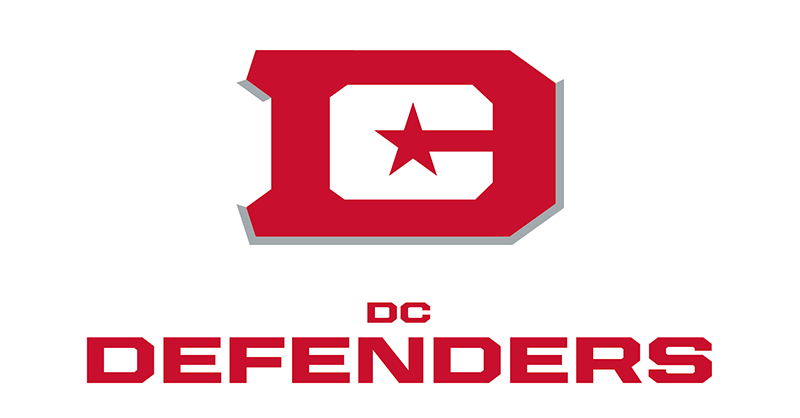 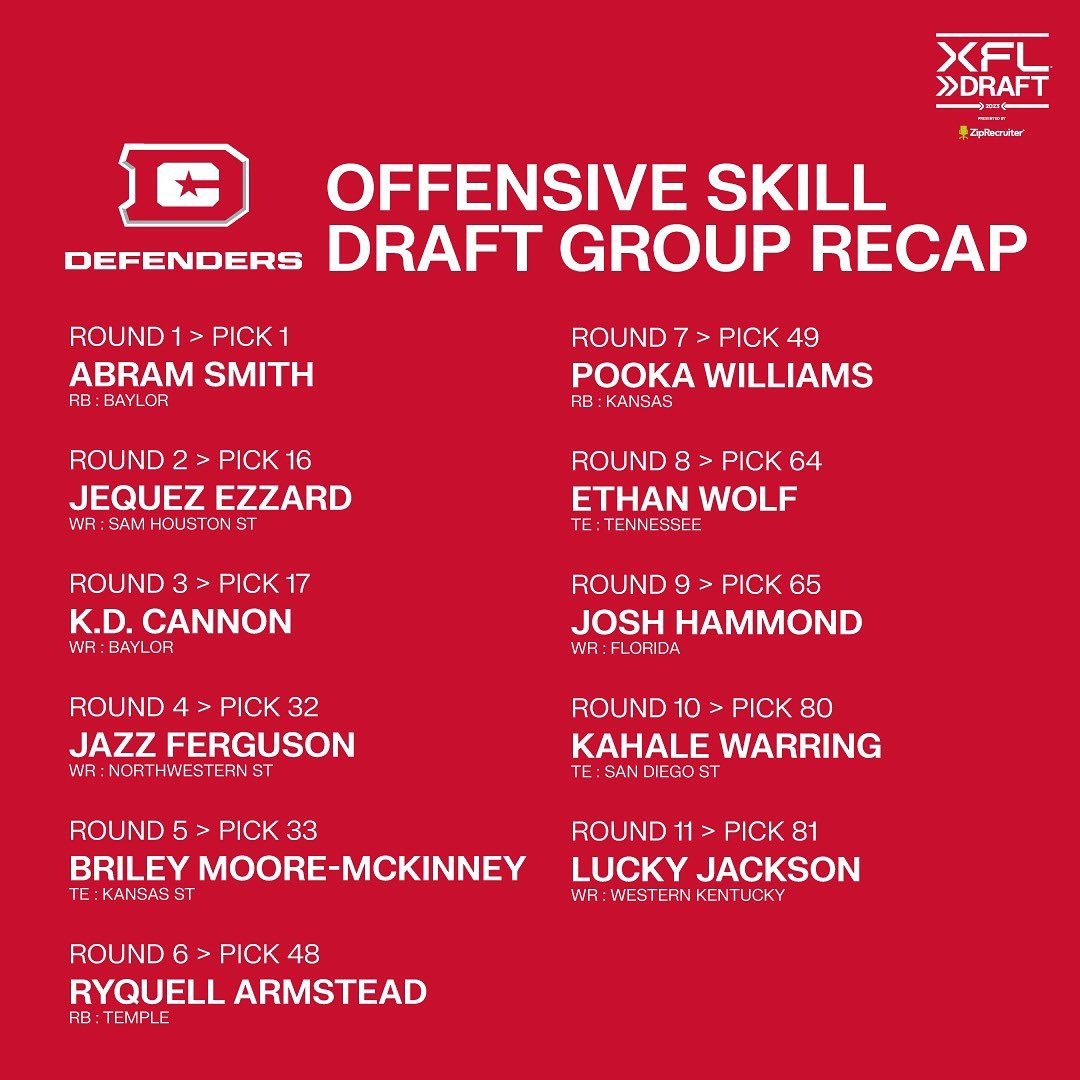 RB Abram Smith was the first overall pick in the Offensive Skill Position Phase, and I don’t see it as a reach. He was signed as an undrafted free agent in April by the New Orleans Saints and carried the ball 29 times in three preseason games. While at Baylor, he averaged over 6.0 yards per carry as a senior, the only year he started, so there’s plenty of tread on his tires. D.C.’s first receiver, Jequez Ezzard, comes from the FCS level. He can also return punts. Josh Hammond was a victim of final cuts in NFL training camp this summer – he’s someone I wrote about as having XFL potential. Ryquell Armstead was sidelined for some time with a scary bout with COVID, but the former 5th round NFL draft pick shares similar measurables with his new backfield mate Smith. 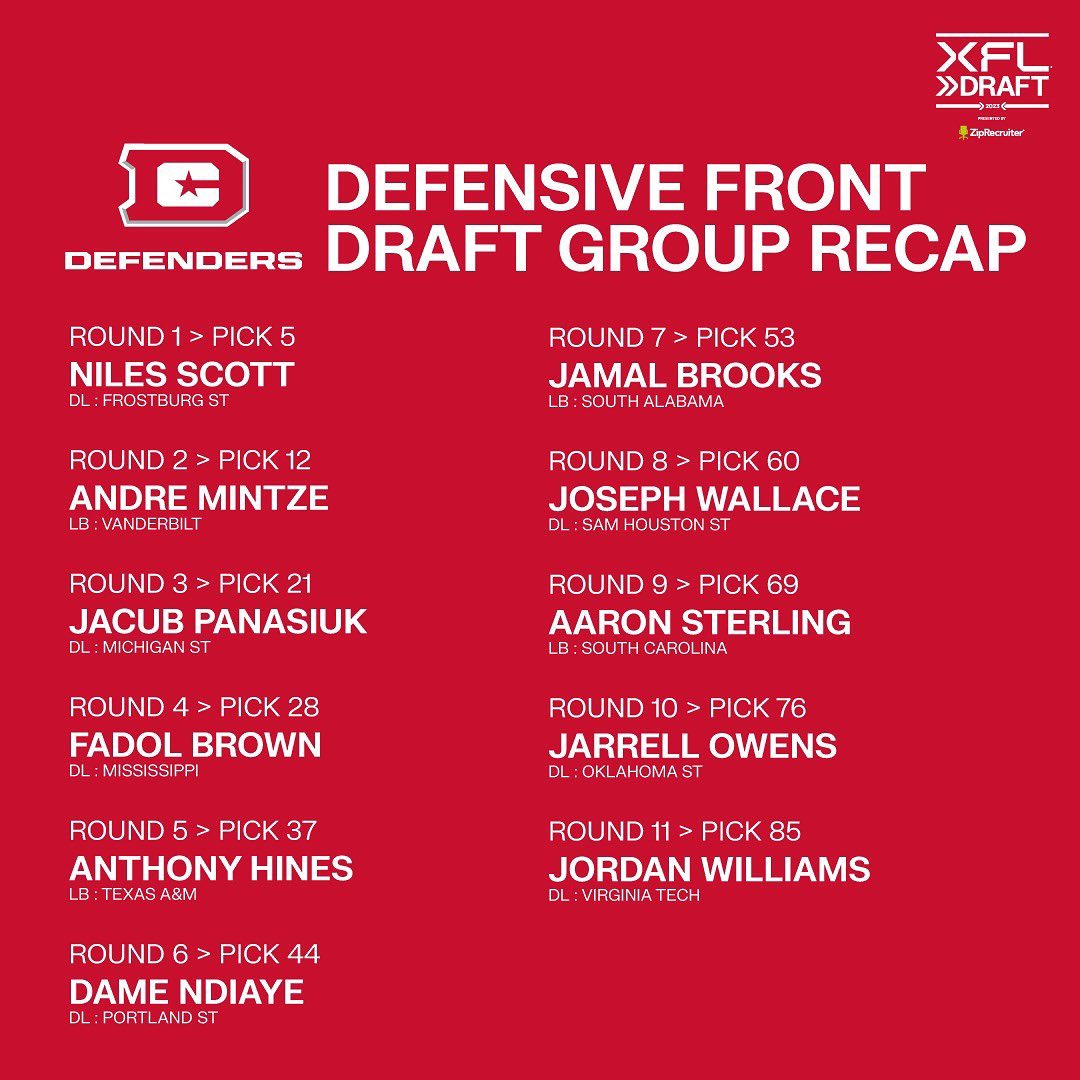 The Defenders began the phase by selecting a 320-pound nose tackle in Niles Scott. It’s usually a good philosophy to get the big guys early. There are a couple of intriguing edge projects here, including Aaron Sterling, Jarrell Owens, and former tight end Dame Ndiaye. Jordan Williams is an end/tackle ‘tweener without a clear position. Their top linebacker taken, Andre Mintze, appears to best fit on the outside in a 3-4 alignment. D.C. was not shy about mining smaller schools. 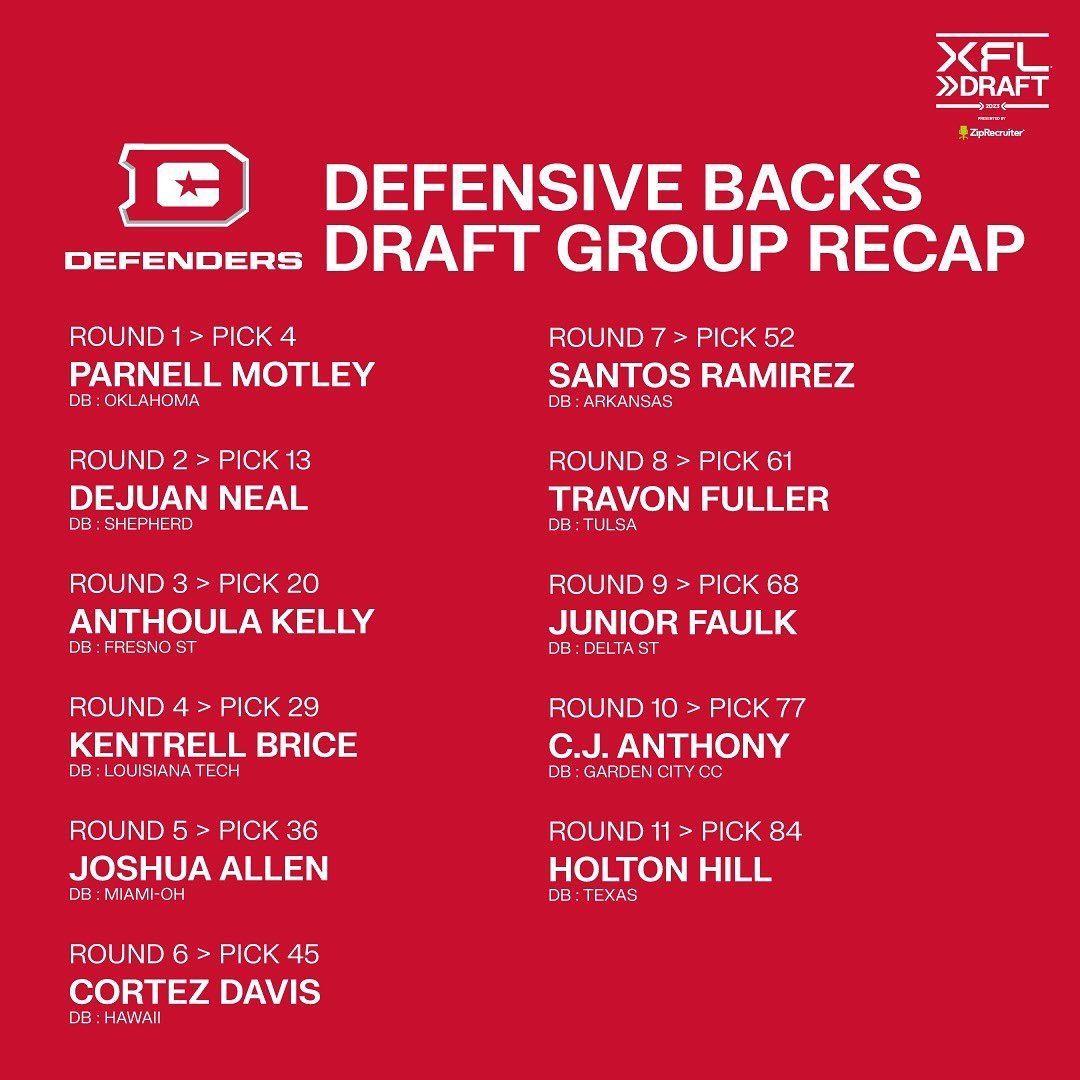 A couple of familiar faces to XFL fans dot the Defenders’ defensive backs selections: Anthoula Kelly was a Tampa Bay Viper in 2020; DeJuan Neal a New York Guardian; Santos Ramirez and Kentrell Brice Seattle Dragons. Neal earned a contract with the Washington Commanders this summer after an impressive showing in the USFL. The final pick of the phase, Holton Hill, could end up being the best pick of the phase if he reports to camp. Only three safeties were chosen. D.C. did a nice job mixing youth with experience in their defensive backfield selections. 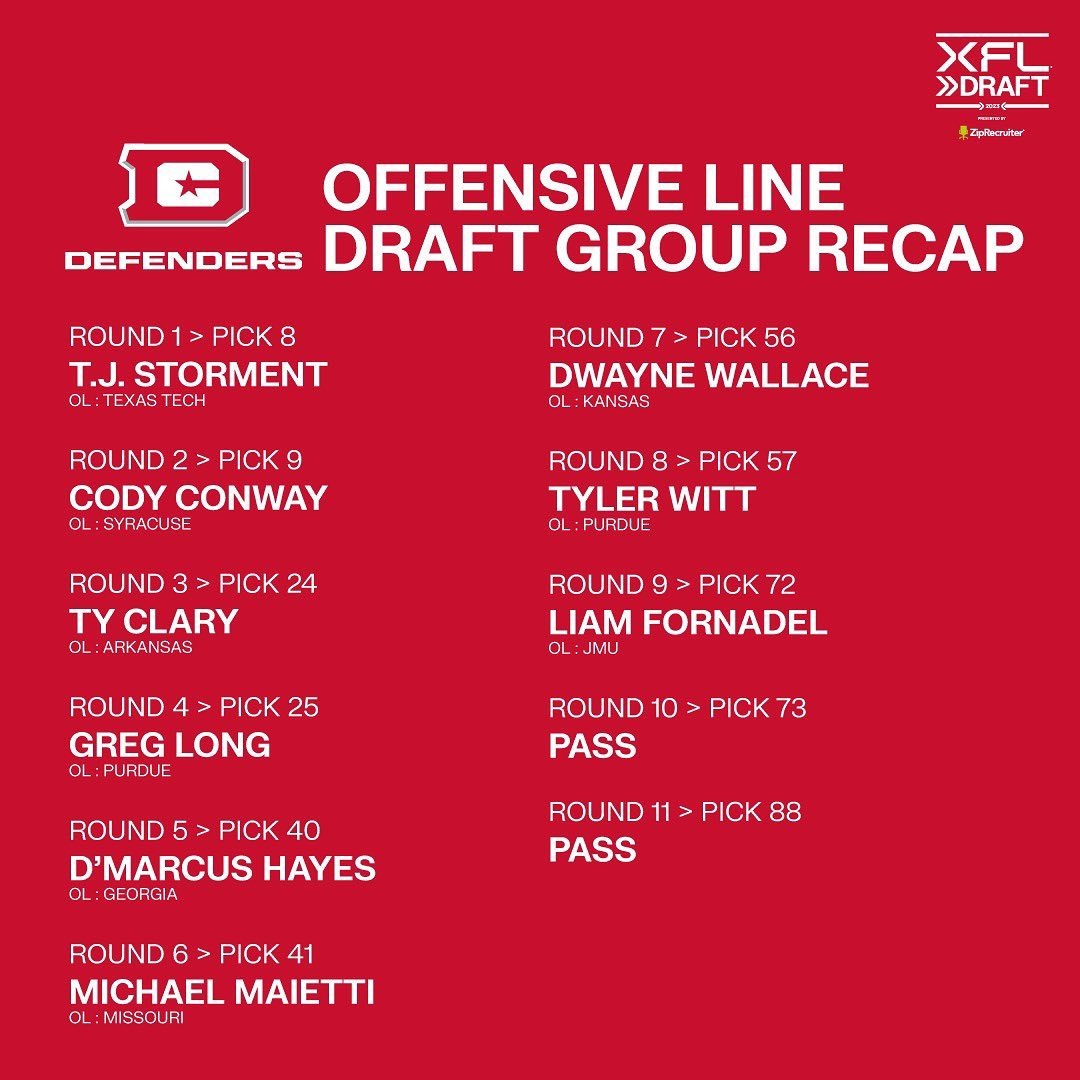 Despite choosing ample players from smaller schools, the Defenders, consciously or not, stuck to the big schools for the most part in their offensive linemen. The breakdown is two centers, two guards, and five offensive tackles. Cody Conway has the most NFL time of the group, though none have played in an NFL regular season game. Unless the Defenders add a center in the supplemental draft, it looks like two rookies, Michael Maietti and Ty Clary, will battle for the starting job.

All three specialists attended XFL showcases. Erik Lawson was listed on East Carolina’s website as weighing 303 pounds, which is troublesome for a pro long snapper who will be asked to cover punts. It’s possible he’s gotten his weight down since then. He also snapped in The Spring League in 2020. Daniel Whelan and Jake Schum are both punters, but Whelan can also kick field goals. It will be interesting to see if Whelan tries to go both ways to save D.C. a roster spot, or if he’ll concentrate on just one position.

D.C. picked just seven players in the Open Phase, beginning with Zimari Manning out of Tarleton State. Manning played in the IFL in 2021, the league in which the XFL has cultivated a partnership. Simmie Cobbs returns to the Defenders, where he played in the league in 2020. Reggie Stubblefield gives D.C. another safety in camp.

One of two teams to pass on an extra QB, D.C. is now the only team with just one: Eric Dungey. Naturally, more, potentially higher-level talent will be available in January. Plus, D’Eriq King is expected to be an assigned quarterback to the Defenders if and when his time on the Carolina Panthers’ practice squad is up.

Best Pick: Getting Josh Hammond, a potential starting receiver from a prestige college football program (Florida) in the 9th round is hard to beat. He’s a true 54th man that Dwayne Johnson always goes on about.

Questionable Pick: More like “non-pick”: Not taking a second QB when they had the opportunity, even with training camp not until January, is a bold move. There seemed to be quarterbacks worth taking a flier on in the pool. If King makes it on the Panthers, the Defenders should be going all-in on QBs in the supplemental draft, because I’m not sure Eric Dungey is the answer as a starter.

Small School Stud: It doesn’t get much smaller than a community college, but Garden City has produced some pro football players. They’ve done it again with CJ Anthony, who has also played in Fan Controlled Football. Anthony worked out privately with the Vegas Vipers in August, showing that multiple teams had interest in him.

Weakest Position Group: Quarterback, almost by default. That said, King is one of my favorite QBs in this league, provided he actually makes it to the XFL.

Key Connection: Most of the coaches on staff, specifically on the offense side, came from HBCU schools, but no players were selected from those colleges. Santos Ramirez was an undrafted free agent with the New York Jets when Gregg Williams was defensive coordinator there; and Fadol Brown was with the Raiders when Defenders Director of Player Personell Von Hutchins was Assistant Director of Pro Scouting.