Run first BattleHawks set the tone early but the Dragons closed in after half. Another full team effort kept St. Louis on top for the win. 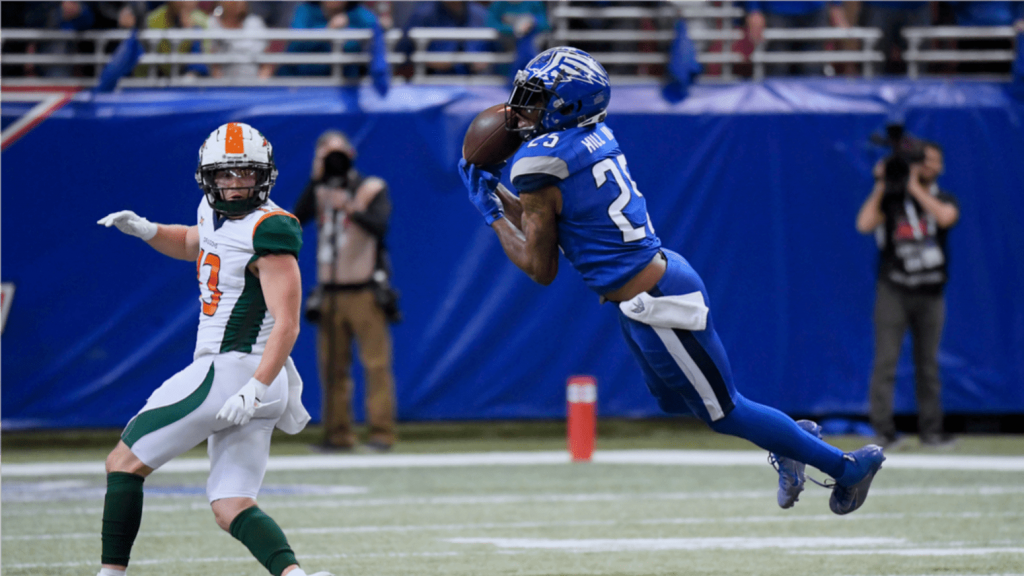 ST. LOUIS — In front of a nearly sold out crowd of 27,527, the City of St. Louis showed up again to the cheer their hometown football team. Week 4 saw the St. Louis BattleHawks improve to 3-1 on the year after a 23-16 win over the Seattle Dragons, who fall to 1-3.

The BattleHawks controlled the game for much of the late afternoon showdown. This team has found a groove in every game so far this season. Their identity as a run-first team sets the tone for the offense with balanced and effective dose of Jordan Ta’amu and the passing game. On the other side of the ball, the defense continues to show up across the board and largely limit the opposing offense. This week was more of the same.

St. Louis set the tone in the first quarter largely behind the arm of Ta’amu. On their second drive of the game, Ta’amu connected with four different receivers as the BattleHawks marched down the field for a 96-yard drive. 75 of the yards were via the passing game while the other 21 came from the legs of Ta’amu. Back to back pass plays of 27 yards put the BattleHawks on the board. The first was to Carlton Agudosi on a deep ball and capped off with a catch-and-run by De’Mornay Pierson-El. St. Louis doubled their PAT completion after Ta’amu and Marcus Lucas connected on the 2-point conversion giving St. Louis a 8-0 lead.

On their next drive, the Dragons mostly halted the run game and brought Ta’amu down for the only sack on the day for either team. Like he’s done all year, BattleHawks kicker Taylor Russolino finished the drive with another impressive 48-yard field goal to put the team up 11-0. Russolino has perfectly executed his kicks all year sitting at 7/7.

After Seattle started with great field position due to a kick out of bounds, the BattleHawk defense was able to stifle their drive and hold the Dragons to a field goal. Seattle had a hard time moving the ball for the entire first half. Brandon Silvers started the day as quarterback for the Dragons and under his reign, Seattle only mustered up 69 yards of combined offense and only 27 in the air.

The last scoring drive of the half was a signature St. Louis drive. 12 plays, 78 yards, and burning over 7 minutes of game clock. Aided by a Seattle roughing the kicker penalty that would have ended the drive on a three and out, St. Louis had a fresh set of downs and chipped away at the field. Ta’amu connected with Brandon Reilly and L’Damian Washington for 21 and 17 yards. Keith Ford capped off the drive with a 13-yard scoring run.

Seattle’s Second Half Shake Up

Seattle went into the break on the receiving end of a lopsided game down 17-3. Looking for some sort of disruption in the second half, head coach Jim Zorn made a quarterback swap sending Brandon Silvers to the Bench and letting BJ Daniels have a chance to lead the Seattle offense.

It was a tale of two halves in this game. The spark of BJ Daniels helped the Dragons try to claw their way back into the game. In the second half, Daniels sparked the offense for 184 yards himself including 84 on the ground. His dynamic ability as a passer and runner began to give the St. Louis defense fits. The Seattle offensive adjustment was a step ahead of the defense and Daniels was hard to contain.

On Seattle’s two second half scoring drives their run game started to churn. On the second of their drives, the heightened defensive attention to the run game opened a hole in the secondary. Daniels connected with Alonzo Moore on a deep ball for a gain of 57 yards, the longest play given up by the BattleHawks defense this year. Shortly into the fourth quarter Seattle had cut the lead down to four, 20-16.

St. Louis only managed two field goals in the second half. Defensively, Will Hill stepped up as the Dragons were driving later in the fourth trying to take the lead. On a Daniels pass deep over the middle, the experienced Safety read the route for his second interception on the year. Which like game one, would seal the deal for the BattleHawks.

Quarterback Jordan Ta’amu set the tone for the offense all day. He recorded career high 16 carriers on the ground leading the team in both attempts and yards with 63. Ta’amu continues to dish the ball out efficiently as well, he was 20/27 for 264 yards. Ta’amu completed 74% of his passes on the day and on the year has a league best 75% completion rate. On the day, Ta’amu accounted for 327 of the offenses 392 yards.

St. Louis’s ball carrying duo of Matt Jones and Christine Michael struggled moving the ball all day on the ground. Jones had 15 carries for 20 yards while Michael had 12 carries for 27 yards. Keith Ford returned for the BattleHawks after missing the last two weeks due to injury. Ford had 3 carries for 23 yards and a touchdown.

I am torn on the offensive performance this week. The almost 400 yards is an impressive number. But their run game was less than stellar. Jones and Michael had 27 combined carries for 47 yards. That is a lot of touches for little gain. Ta’amu had his most carries on the year, his number was called often likely from OC Chuck Long seeing something in the Seattle defense they were able to exploit. From a running back standpoint, the run game has not been the most effective or efficient part of the offense even though it is the team’s identity.

Though not showing in the numbers, it seems like the offense is doing exactly what it is designed to do. Short runs and passes setting up a manageable 3rd and short. They’ve done this all year and have been able to execute as well. On the year, they are sitting at a 52% conversion rate on 3rd down. The Super Bowl winning Kansas City Chiefs converted on an NFL league best 48% of 3rd downs.

St. Louis has established themselves as one of two teams at the top of the league. The team has shown improvement week in and week out on both the offensive and defensive fronts, the only team in the league to do so.

The City and fan base has a lot to get behind as we approach the halfway point of the season. With another packed Dome the atmosphere was vibrant and booming. BattleHawk football is fun and a great team to stand behind.

Next Sunday March 8 at 2pm CT, the BattleHawks travel to the nation’s capital to take on the faltering DC Defenders. DC has bottomed out after two straight weeks of losing football. DC will look to bounce back fighting to keep their morale up in this showdown in the East.

As always, Fight and Fly On, BattleHawk Nation.