“Being a BattleHawk was honestly one of my best experiences with football,” Fitzgerald said. 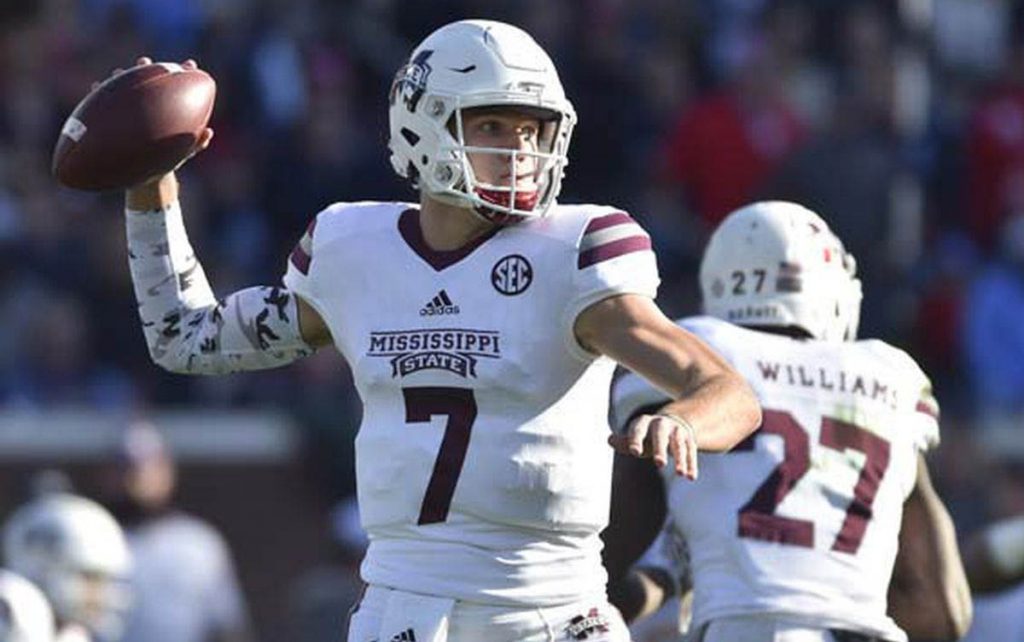 Nick Fitzgerald, a former backup quarterback of the St. Louis BattleHawks is one of the most versatile players on the free-agent board. He can play multiple positions including quarterback and tight end.

Fitzgerald played for Mississippi State University as a Bulldog. He was a three-year starter, from his sophomore year to his senior year. The Bulldogs signal-caller passed for 6,207 yards for 54 touchdowns and 28 interceptions on 910 attempts.

He is also lethal on the ground. Fitzgerald took the ball himself 581 times for 3,604 yards and 45 touchdowns. Those numbers alone show how dangerous that Fitzgerald is as a dual-threat quarterback. During his senior year earned the SEC player of the week six times which set a school record.

“Mississippi State will always have my love and respect. They were the first program to give me an offer and the fans stuck with me through thick and thin. It’s the place I met life-long friends and really turned me from a boy into a man,” Fitzgerald remembered.

At the NFL combine, he ran a decent 4.64, 40 yard dash, especially for a player who is 6’4, 225 lbs. Fitzgerald’s size and athleticism made him a great asset at multiple positions. During the combine, a couple of teams asked if he was willing to run tight end drills, which he was open to, but it did not end up panning out into anything.

Fitzgerald would take part in the 2019 NFL Draft but would go overlooked.

A play that I’ll never forget as long as I live! pic.twitter.com/zp8uZdJ36d

His first chance would come as an undrafted free agent with the Tampa Bay Buccaneers. Staying with the team through training camp would give Fitzgerald a start as more of a utility player, because of his size and speed.

“Even though I was not on the team for a long time, I’m very proud to say I made an NFL roster and played for Bruce Arians and Byron Leftwich was awesome,” Fitzgerald said. “I just wish I could have stuck around and been friends with Gronk.”

Getting to play with Gronk would have been awesome, especially since this is where Fitzgerald started to experiment with the idea of playing tight end a bit more. Just imagine how dangerous that tight end package could have been with those too, not to mention Gronk showing his tricks and tips to Fitzgerald.

Flying in as a BattleHawk

The XFL is where things got fun, as always, because when isn’t the XFL fun?

Fitzgerald would technically not pass the ball during his time in St. Louis as a BattleHawk, but he was part of a great organization. Arguably, the BattleHawks had the best quarterback room in the entire XFL, with He shared the same quarterback room with Jordan Ta’amu, currently with the Detroit Lions, as well as Taylor Heinicke, currently with the Washington Football Team.

Fitzgerald did rush the ball two times, with one rush for seven yards and the other for three yards.

More notably, Heinicke and Fitzgerald would have some fun with a locker room celebration after their big win against the Dallas Renegades. It was one of the more memorable moments in the XFL season, with a video clip going  viral and receiving over 3 million views to date.

“It’s hard for me to pick any other moment than the one that went the most viral out of anything related to the XFL… The seltzerbrations!” Fitzgerald exclaimed. “Taylor [Heinicke] and I were just so pumped up from the win and coming into a locker room stacked high with free alcohol just really set it over the top. I had never bitten a can open before that moment, I was just feeling it,” Fitzgerald shared.

Who doesn’t miss a good seltzerbration!? Nothing like the players have fun and celebrating in the locker room after a win! The XFL is a fun league for everyone.

Fitzgerald would remain a BattleHawk up until the season was cut short. It would have been cool to see Fitzgerald take some shots down the field at quarterback, but it didn’t end up happening. He has a good arm that he somehow still slept on.

“Being a BattleHawk was honestly one of my best experiences with football,” Fitzgerald said. “I loved my teammates and our coaches were top-notch, and even though it was professional football, there was still a lot of fun going on.”

Ever since the season ended, Fitzgerald has been staying ready for an NFL opportunity. In fact, the week before Thanksgiving, Fitzgerald had a tryout with the Indianapolis Colts as a tight end.

“Well, I started a job doing investment real estate in Tampa, FL, but when I get off I still go run and lift just like I would if I was on a team right now,” Fitzgerald said. “I found some local guys to throw with and run routes with and I’m just waiting for my call back.”

It is great to see that Fitzgerald is still looking for an NFL opportunity, perhaps we could even see him in the XFL again next spring. His time in the XFL was pretty cool because he was able to focus on bettering himself and playing multiple positions.

Fitzgerald is kind of a strong Taysom Hill who is the hybrid quarterback from the New Orleans Saints that plays almost every position. Being able to play more than one position is clutch, because using a roster spot on that kind of player can be tempting. You can get almost three players in one, making swiss-army knife players valuable.

“I will play whatever position a team wants me to play,” Fitzgerald said. “I just want to have another chance in the league.”

Fitzgerald is undoubtedly worth giving a chance with, even if he would get signed to a futures contract to come back out to a training camp. He is a player who lets his on field stats do the talking and just plays the game of football the way that it is meant to be played, physical and fast.