XFL BattleHawks down the Guardians in packed Dome

The highly anticipated return of football to the great City of St. Louis did not disappoint, not one bit. BattleHawks’ full team effort helps capitalize on spiraling Guardians. 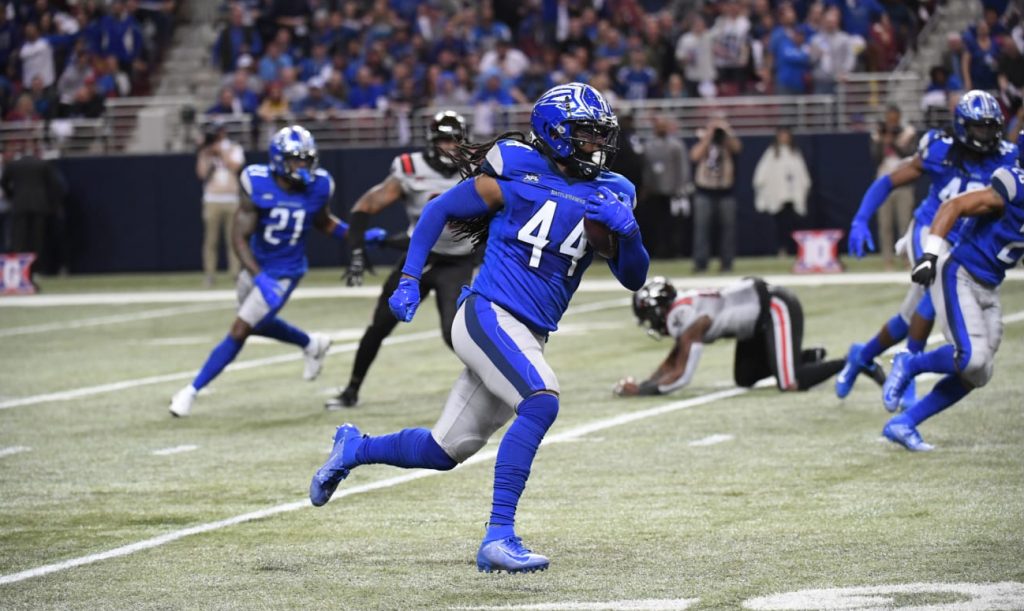 BattleHawks Joe Powell rounds the corner in the first ever XFL kickoff returned for a touchdown. (Credit: XFL.com)

ST. LOUIS – The highly anticipated return of football to the great City of St. Louis did not disappoint, not one bit.

The St. Louis BattleHawks improved to 2-1 after handily taking down the New York Guardians 29-9, New York falls to 1-2 on the year.

For St. Louis, the game was full of exciting plays across the offense, defense, and special teams. For New York, the game leaves them with even more questions at quarterback than they started with this week and an offense that could not get going for a second straight week.

A Day of Firsts

On the day of their first home game, the BattleHawks put on a special show for the fans adding both team and league firsts.

On their first possession, the St. Louis backfield duo of Matt Jones and Christine Michael ran the team down the field for a quick opening drive touchdown. Jones, who has missed parts of practice each of the last two weeks with a knee injury, ripped a season long 47-yard rush. Michael capped off the drive with a 14-yard touchdown run.

This is the second straight week the BattleHawks have opened up the game with an opening drive touchdown. Credit to Coach Hayes and OC Coach Long for their preparation going into games.

St. Louis pulled off the first kickoff return for a touchdown in the league. Early in the second quarter, Keith Mumphrey received a kick from New York’s Matt McCrane. BattleHawks drew up a reverse as Mumphrey tossed the ball to teammate Joe Powell. Powell took the ball all the way to the house, tiptoeing down the sideline before diving in for the score.

Special Teams were not done there. Two series later after the defense held the McGloin led offense to a three-and-out, St. Louis’s Carlton Agudosi got through the line to block the punt by Justin Vogel. Shaq Jones finished the play for the BattleHawks by recovering the blocked punt, the first of the year for St. Louis.

On the subsequent offensive drive with a short field to work with, St. Louis took it in for a quick score on a Matt Jones touchdown run. This was the first rushing TD on the young season for the BattleHawks lead back. And that’s not even the biggest highlight of this series.

Following Jones’s touchdown, QB Jordan Ta’amu shuffle passed the ball to De’Mornay Pierson-El who connected with Alonzo Russell in the end zone for the BattleHawks first success point after conversion.  And to boot, it was a well called 2-point conversion. Prior to this conversion, St. Louis was 0-8 on attempts this season.

BattleHawks Safety Kenny Robinson hauled in his first professional interception. On the last pass we would see from Guardians starting QB McGloin, Robinson brought in the erratic pass. Robinson is the XFL’s only player who is eligible for the NFL draft this year.

The big plays don’t stop there. St. Louis kicker Taylor Russolino got in on the action with the first XFL kick over 57 yards hitting from 58 yards out. Russolino also drilled kicks from 39 and 36 yards on the day.

And last but certainly not least, the fans in St. Louis, all 29,554, filled The Dome on this the first home game of the BattleHawks season. A sold out crowd in the lower bowl made their presence known throughout the game. The stadium was filled with chants throughout the game from ‘BATTLE-HAWKS’, ‘KROENKE SUCKS’, and simply drowning out the Guardians from hearing their play calls. Fans showed up and did their job.

New York came into St. Louis following a disappointing shutout week 2 in DC. The Guardians we’re able to manage 9 points against the BattleHawks. It took a drive from third-string QB, Luis Perez, halfway through the fourth quarter to score the team’s first touchdown in almost two full games.

The Guardians started the game with Matt McGloin under center. McGloin got banged up in the first quarter giving way to Marquise Williams. McGloin would get back into the game in the second quarter but his day ended at the end of the first half on the Kenny Robinson interception. Williams led the Guardians after the half but could not generate any sort of offense.

During a goal-line stand by the St. Louis defense, Williams opted to pass the ball three straight times. The access the XFL gives fans to the game answered the question as to why New York passed the ball when their pass game wasn’t working. A sideline interview with NY QB coach G.A. Mangus said the plays were called with alerts giving both a run and a pass play as options. Mangus admitted at least one play should’ve been a run. With a QB with little first-team reps, play calls need to be succinct so the man under center can focus on executing plays not deciding them.

Luis Perez would finish off the trio of Guardian quarterbacks to take snaps under center on Sunday. Perez orchestrated the only New York touchdown capitalizing on good field position starting on the St. Louis 40 yard line.

Balance Across the Board

From the long and diverse week of firsts, it is clear this week’s win was a full team and city effort. St. Louis kept true to their run-first offense. Coach Long dialed up more than double the number of runs (37) compared to the number of passes (18).

Jordan Ta’amu donned the captains ‘C’ on his jersey this week, the first appearance on any BattleHawks jersey this season. Ta’amu mixed in a couple of his, now signature, escape from the pocket plays during the game. But overall, it was a quiet day for Ta’amu. The good news is that this team can play well without Ta’amu needing to light up the stat sheet.

Another strong showing from the BattleHawks defense this week helped limit the Guardians to only 9 points. The D-line racked up 3 sacks on the day, Andrew Ankrah continues to impress bringing in his second sack on the year, Casey Sayles and Will Clarke each brought in their first sack. DC Coach Jay Hayes’s unit won the turnover battle 1-0, St. Louis is 2-0 when they win or tie on the turnover front.

Credit the Guardians for putting up the most yards against the BattleHawks defense. This is the first time St. Louis has given up more than 300 yards (307) on defense and totaled less than 300 on offense (273). Though having given up the most yards on the year, it’s a testament to the ‘no quit’ mentality this team has. When New York was putting together strong drives, the St. Louis defense didn’t give in, stopping the opposing offense time after time on the day.

Late in the game, it would have been nice to see St. Louis open their playbook to let Ta’amu air out the deep ball trying to stretch the field. We’ve also seen a handful of plays with fleet-footed backup quarterback Nick Fitzgerald in the first two weeks but nothing this week. A three-score lead in the fourth quarter seems like an appropriate time to test out the playbook.

After wins, I normally assign an offensive and defensive game ball. This week I’m mixing up the categories.

Second Game Ball: The Fans; The Dome was rocking on Sunday and the team thrived off the energy.

St. Louis, welcome back to the football scene. You didn’t miss a beat.

Didn’t get enough XFL today? BattleHawks are back in the Dome next Saturday, February 29th to take on the Seattle Dragons. New York heads home to take on the now red hot LA Wildcats.

Fight and Fly On, BattleHawk Nation.