QB Taylor Heinicke made his first NFL snaps since his time in the XFL. 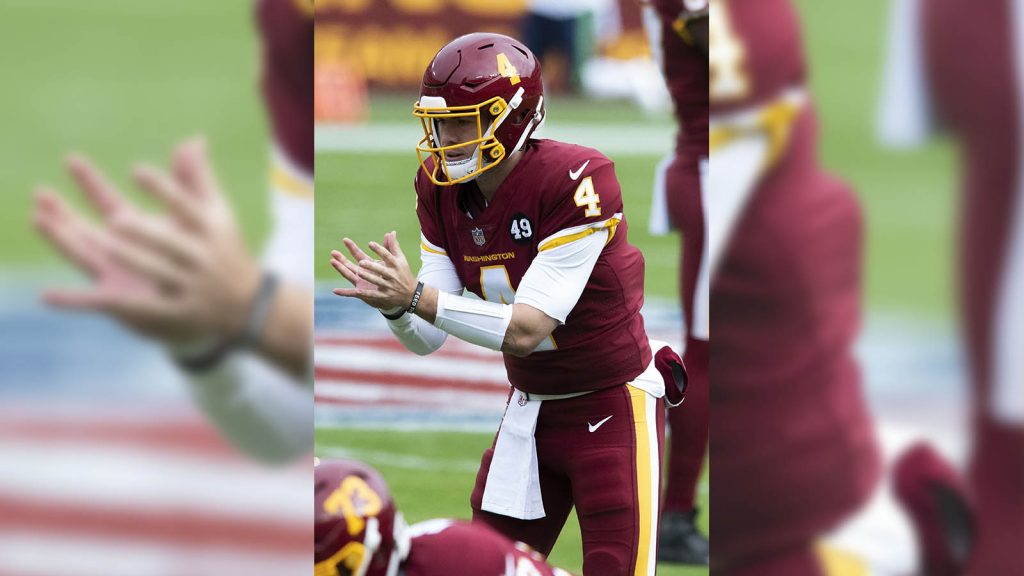 The former backup quarterback of the St. Louis BattleHawks, Taylor Heinicke found his way back into the NFL signing with the Washington Football Team last week. Yesterday, Heinicke made his first NFL snaps since his time in the XFL.

Heinicke came in during the fourth quarter to replace quarterback Dwayne Haskins Jr after he threw for two interceptions, as well as losing a fumble and no touchdowns. Washington’s head coach Ron Rivera is no stranger to Heinicke. During the 2018 season, while Rivera was the head coach of the Carolina Panthers, Heinicke was the backup quarterback. Ironically, the duo was facing the Carolina Panthers in this game.

Heinicke, the former BattleHawk, looked good under center for Washington, completing 12 of 19 passes and finding the endzone on a beautiful pass to wide receiver J.D. McKissic which was a 29-yard touchdown pass, but Heinicke really threw the ball about 47 yards in the air to find McKissic. Heinicke also rushed three times for 22 yards on the ground. Not many seemed to realize Heinicke’s underrated escapability until today, which is a very under the radar trait for him.

Keep in mind those stats are just from one-quarter of play. Washington ended up losing the game 20-13, and fell to a  6-9 record on the year. The Dallas Cowboys are also 6-9 but the Washington owns the tiebreaker so they still sit atop the NFC East. If Washington wins they are in the playoffs, they basically control their own destiny. Hopefully, we will see Heinicke in some NFL playoff action in two weeks.

Washington will take on the division rival, the Philadelphia Eagles, along with electric rookie quarterback Jalen Hurts next Sunday night. That being said, with quite literally the season on the line, a lot of questions are left to be answered. Washington will have to decide between Dwayne Haskins Jr, Alex Smith, if he is healthy, and of course the XFL’er Taylor Heinicke. Honestly, Heinicke should get the start, assuming Smith stays on the injured list. Heinicke showed a lot of promise, and he and Rivera seem to have pretty good camaraderie from their days in Charlotte.

Heinicke seemed locked in from the moment he stepped on to the playing field. The energy was there, the focus was there and so was his stuff. He seemed to have all systems going for him, and Heinicke knew it was his time to show his stuff. It appeared he did just that in the sample size that we had seen yesterday evening.  The former BattleHawk showed his not afraid to air the ball out, something Haskins Jr is not so comfortable doing, much like Alex Smith. Heinicke may not have a cannon of an arm that wows like that of Patrick Mahomes, but he does most certainly have a big enough arm to be in the NFL and make big plays when needed and that is all that matters at the end of the day.

Battling for a spot

Haskins Jr never seemed to get anything going including his six of 15 for just 36 yards in the air, along with two picks and a fumble that was lost, all just in the first half of play. Heinicke seems to be the logical clear-cut option, of course barring anything strange.

Perhaps if Heinicke does get the chance to come out and play against the Eagles and get the win, an NFL team may sign him to a better contract or maybe Washington will bring him back. Washington has been pondering the move of Haskins Jr being sent somewhere and then the aging Alex Smith who will be 37 in May, questions of course are open-ended on how much longer Smith can play in the NFL. That is especially in talks after the gruesome injury he suffered in 2018. The only young option would be Kyle Allen who has shown flashes of being good. It seemed like the team molded well with Heinicke, so why not give Heinicke a chance to keep running Washington’s offense and let him keep producing numbers and wins.

Prior to today’s action the last time Heinicke saw NFL action was backing 2018 with the Carolina Panthers, where he played in six games, starting one. He threw 56 total passes, completing 310 for 320 yards and one touchdown, and three interceptions. Those stats do not include his one lone pass for 10 yards playing for the Houston Texans in 2017. Heinicke also spent some time on some other NFL squads, such as the Minnesota Vikings and New England Patriots.

Obviously, his NFL past was not stellar but it does seem to be that him being apart of the XFL set a spark off in him to perform his best and show his worth.

The Washington Football Team will have the foreseeable predicament on their hands with who to place under center on Sunday Night Football in the bright lights. In short, Haskins is unreliable, Smith is a liability and Heinicke looked good while playing, along with being healthy, so there really is no reason not to let Taylor Heinicke take over as signal-caller. The former St. Louis BattleHawk will look to make all of his former BattleHawk teammates as well as the entire XFL proud.

Vikings should give XFL Defenders kicker Tyler Rausa a chance
Should the Steelers stick with XFL Vipers kicker Wright next year?