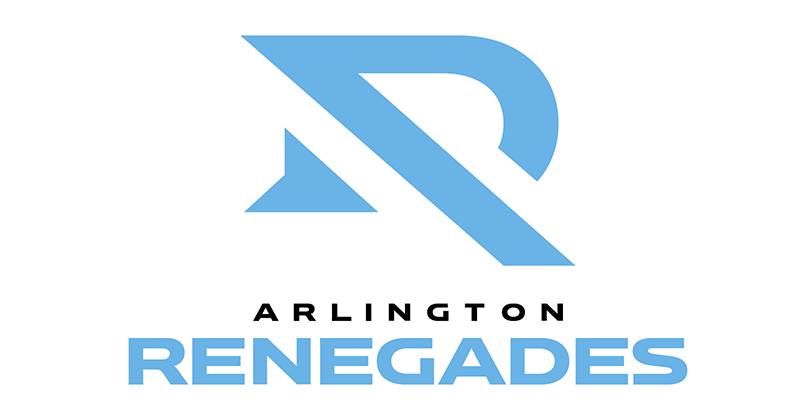 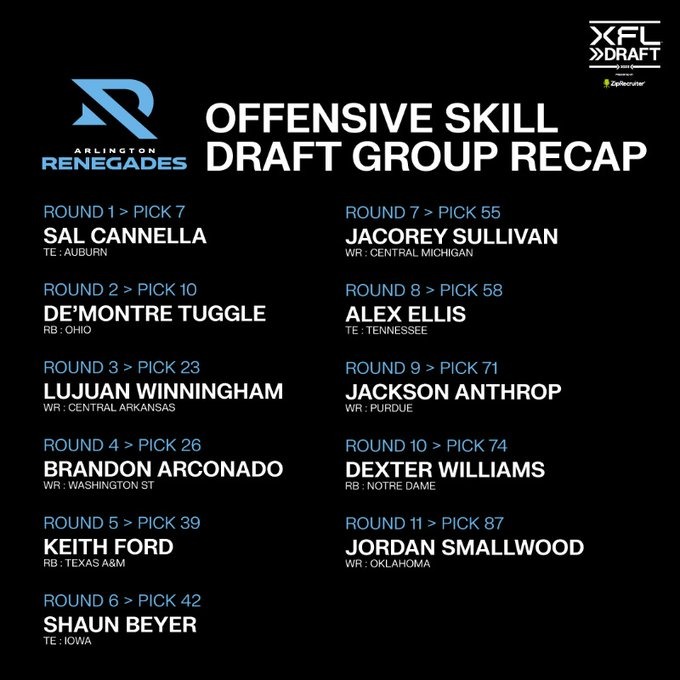 The only team to choose a tight end in the first round of the Offensive Skill Position Phase, the Renegades went with Auburn’s Sal Cannella. Cannella added about 15 pounds to his frame in moving from wide receiver in college to tight end in the pros. He was an All-USFL selection at the position this year, earning him a look in Green Bay Packers training camp. Co-offensive coordinators Chuck Long and Jonathan Hayes may be changing up the offense they used from their time together with the Battlehawks in 2020, as that team’s tight ends only caught 15 passes over five games. Shaun Beyer and Alex Ellis join Cannella at tight end, but are more block-first players at the position. It’s an inexperienced group of receivers to come out of this Phase. All the team’s running backs ran 4.5s in the 40-yard dash coming out of college; a punishing, between-the-tackles run game could be in the cards. 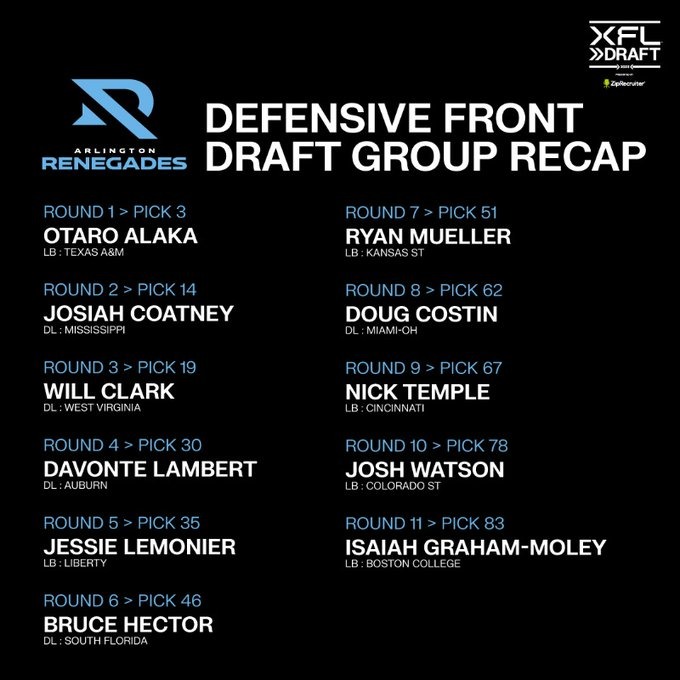 Arlington split their picks pretty equally between linebacker (six) and defensive line (five). Of the five linemen, four are defensive tackles. Co-defensive coordinators Tim Lewis and Jay Hayes both come from the Battlehawks in 2020, and they brought with them defensive linemen Will Clarke and Devonte Lambert. Doug Costin and Bruce Hector are two players who’ve been in and out of the NFL over the last few years. If Isaiah Graham-Mobley can buck the injury bug, he’ll be a steal as the last pick of this Phase. The Renegades look to be strong up front based on these selections. 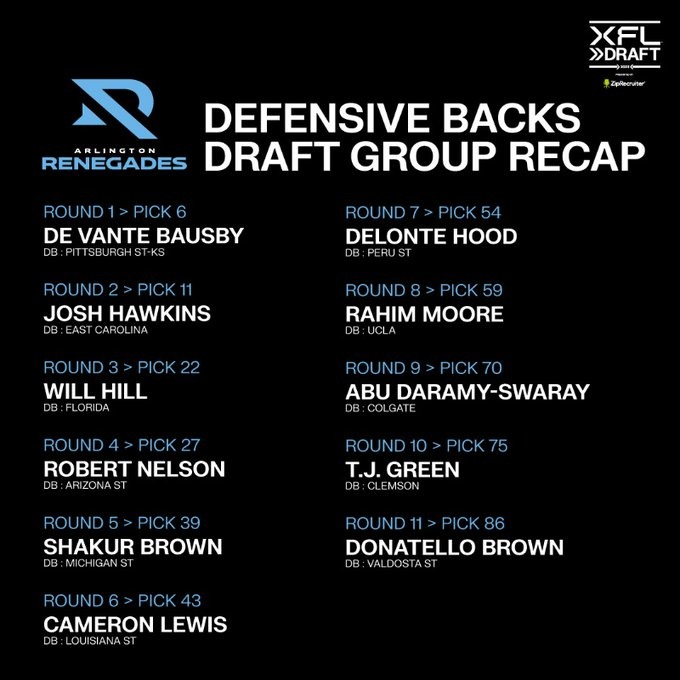 Bob Stoops and company raided the USFL once again in choosing DeVante Bausby and Shakur Brown in the Defensive Backs Phase. Donatello Brown and Josh Hawkins return to the Renegades from 2020; Hawkins was one of the best corners in the league at the time. Will Hill and Robert Nelson are two more Battlehawks that will wear powder blue in 2023. Hill and Rahim Moore will be the elder statesement of the safety group, both of whom are 32 years old. The Renegades continued to have a Baltimore Ravens-like draft, where really good players seem to magically fall to them and rather than overthink things, they just pick them. 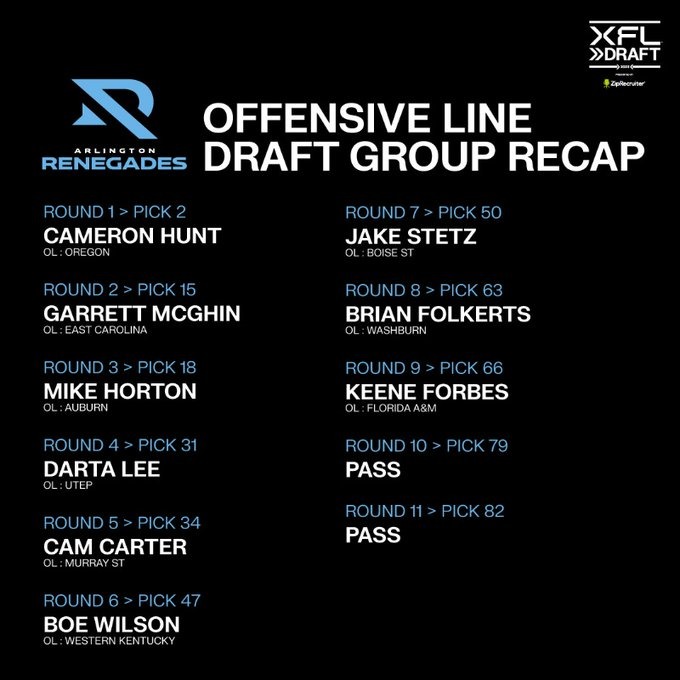 Like most teams, Arlington chose just nine offensive linemen, passing on their final two selections. Their top three picks were guard, while they waited until late to pick a center (Brian Folkerts). Garrett McGhin played some center in college, so if Arlington likes their other guards, he could compete with Folkerts in the middle. Folkerts started at that position for the Battlehawks in 2020. Darta Lee and Cam Carter both played left tackle in college, but that’s an awfully important position on the line to trust to players without much pro experience.

The 2020 reunion continued in the Specialists phase, with Taylor Russolino and Marquette King reuniting in Arlington after playing together in St. Louis. Both were near the top of the league at their respective positions. Antonio Ortiz is a long snapper who has been getting NFL tryouts during the season. It’s a strong trio.

Arlington cleaned up in the Open Phase as well. They brought in Houston’s starting OLB from 2020, Edmond Robinson. Glen Logan, Micah Dew-Treadway and TJ Barnes are all potential contributors at the DT spot. The Renegades invested heavily in that position in this draft. Isaac Nauta didn’t run well at the NFL Combine in 2019, causing him to fall to the 7th round of the draft. Joe Powell returned a kick for a touchdown in the XFL in 2020. Something that bears watching: United Football Players Assocation president Kenneth Farrow was chosen in the Open Phase as well.

Fordham’s Kevin Anderson joins Drew Plitt and Kyle Sloter as Arlington QBs. Anderson is one of the bigger unknowns of the quarterbacks taken this week. His alternative league resume includes stops in the AAF, CFL and The Spring League.

Best Pick: There are a lot to choose from, but I’ll go with Nauta in round five of the Open Phase. Any time you can find an NFL draft pick that late in the draft, even if there might be concerns about them reporting to camp, you take a flier on them.

Questionable Pick: Don’t get me wrong, I like that the XFL opened the doors to XFL 2020 players via this draft, and that teams didn’t shy away from choosing them. But Arlington relied heavily on those players, many of whom haven’t played competitively since then. Taking someone like Will Clarke, at 31 years old, in the third round even though he last played in the fall of 2020, is a risk.

Small School Stud: From Division III Millsaps College, Russolino has beaten the odds to actually play in the NFL. He’ll try to use the XFL as a springboard to get back there once again in 2023.

Strongest Position Group: The cornerbacks are really solid, but I’m going with special teams. Russolino hit 90% of his field goals in 2020 including the league’s longest at 58 yards. Marquette King out-paced all punters in gross average. Antonio Ortiz is an NFL-caliber long snapper.

Weakest Position Group: The safety trio of TJ Green, Rahim Moore, and Will Hill have combined to play over 150 NFL regular season games. In a league where the majority of players are three years removed or less from their college days, how will the aged hold up on the back end?

Key Connection: It’s obvious that part of Arlington’s strategy was to focus on players from XFL 2020. They ended up with 18 who were the league in its previous incarnation. Of those 18, half of them played with the Battlehawks and are back with those five coaches (including RBs coach Reggie Davis) now on the Renegades’ staff. Three players are returning to the Renegades.