The XFL’s most anticipated announcement since closing was mostly a message of promises and pledges wrapped around the news of a delay until 2022. 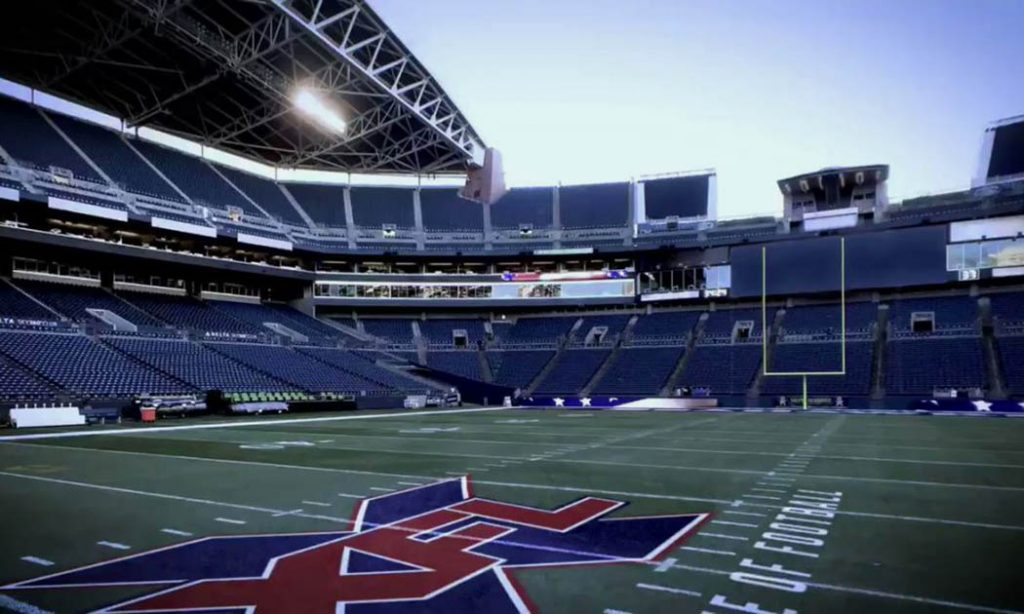 The placard image from the first video released by the XFL since April 2020.

Early in the morning of Thursday October 1st, 2020, we were told there would be an announcement from the XFL. A few minutes later, there it was.

The main message of the announcement was quick and clear: The XFL would not play until 2022.

Accompanying the announcement were social media posts from two of the league’s new owners, Dany Garcia and Dwayne “The Rock” Johnson, as well as a slick video with voiceovers done by Garcia and Johnson themselves.

This, the XFL’s most anticipated announcement since closing was mostly a message of promises and pledges wrapped around the news of a delay until 2022.

XFL 2022 was not unexpected

Actually, among pundits, there has been a well expressed train of thought that delaying until 2022 may be the best path forward for the beleaguered XFL. Although, even by waiting, the path will still be a rough one, as our own Greg Parks laid out in a recent column.

With little chance for the league to see substantial revenue if they began to play under COVID-19 restrictions, starting the league anytime before the threat of coronavirus substantially lessens  would be akin to throwing money into the wind. These new owners have money, but they didn’t buy the XFL with the intention to become paupers.

With almost 500 days to go until any potential kickoff, what is an XFL fan to do?

There is Dany Garcia’s promise of a 24/7 – 365 day XFL which may turn into a reality-style program, and this may begin in 2021 as pointed out in an article by Mike Ellison. Mike purports that 2021 will be an exciting time to watch the new owners build their XFL brand and develop league-centric programming akin to the fictional Ballers, an HBO program that featured Dwayne Johnson. There is mega-star power in the XFL ownership group, and we will get to see how they plan on incorporating it into the XFL’s future.

Still you can’t ignore the disappointment, especially when it comes to the fans.

Since 2018, the XFL has been a roller-coaster ride of ups and downs for most fans. Actually, some will even tell you they got on the bumpy ride with the first XFL in 2000. Even considering how the most recent failing of the league was caused wholly by COVID-19 does not seem to make the loss any easier to stomach. With the new owners taking control of the league there was hope and excitement, but now the thought of waiting at least another 18 months is another major dip in the ride.

Many XFL fans have weighed in with a disappointment in the announcement in our XFLBoard discussions:

“Based on the tweets from Rock and DG – it is basically starting from scratch, not good.” ~ 4th&long

“What I am saying is we don’t have football. We have words.” ~ FootballYoda

Some were more positive about the decision:

“I have no real issue with this. Whatever steam the XFL had was lost once they suspended operation.” ~ laxtreme56

“Who knows, the owners may have preferred to start in 2021… but the stars needed to align not just within the XFL but elsewhere for that to happen.” ~ GregParks

Since hearing the news of the XFL being purchased by new owners, the league’s former players had been buoyed by the prospect that they may soon be called back to play the game they love.

However, along with the news of league play being delayed until 2022, the players received a personal message from the XFL thanking them for their service to the league. 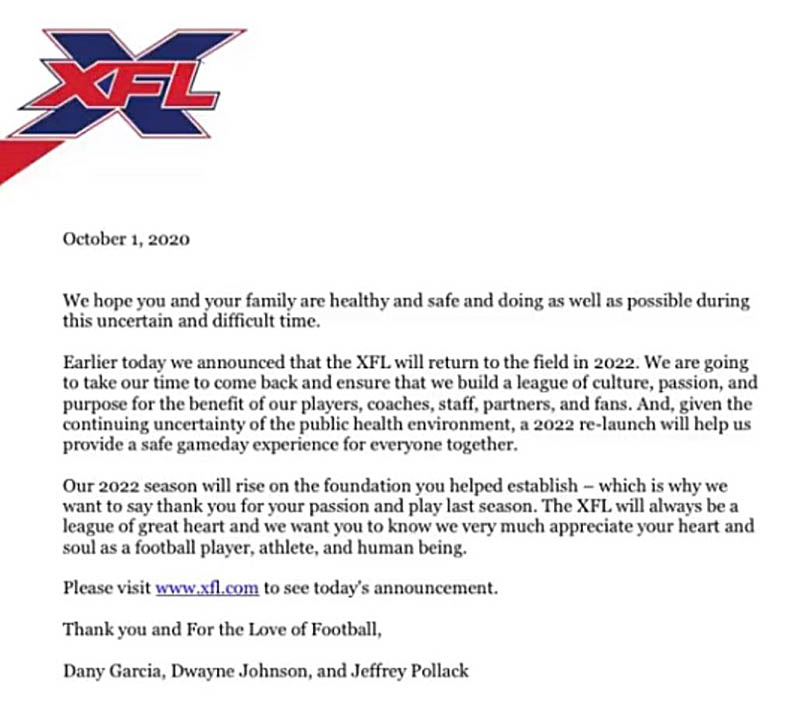 When asked, some players said they were excited to hear the news, but expressed heartbreak for those who wanted to play sooner. A general feeling among players is they still hoped to return to their respective teams.

Seattle Dragons kicker Ernesto Lacayo, who continues to train and hone his skills, said he would love to go back to the XFL’s Pacific Northwest.

“I will continue to train and stay ready for anything.” Lacayo said. “But definitely would like to play again in Seattle when the time comes.”

When asked about the situation, DC Defenders Tyler Rausa remarked, “I think it’s a good business move. Selfishly, I wanted them to come back in 2021, but I had a feeling it was 2022.”

It seems many players are taking the announcement in stride, although, understandably they would rather be playing.

On October 1st, Dwayne Johnson summarized the announcement by tweeting, “As owners, we’re proud to champion our XFL players, coaches, cities and fans into an electrifying 2022 season! It’s an uphill battle – but we’re hungry, humble and no one will outwork us. A league of culture, passion & purpose.”

We can only hope The Rock realizes how much fans, players, coaches and more hang off his every word, and that he will be held to his promise and pledge in the years to come.

As owners, we’re proud to champion our XFL players, coaches, cities and fans into an electrifying 2022 season!

It’s an uphill battle – but we’re hungry, humble and no one will outwork us.