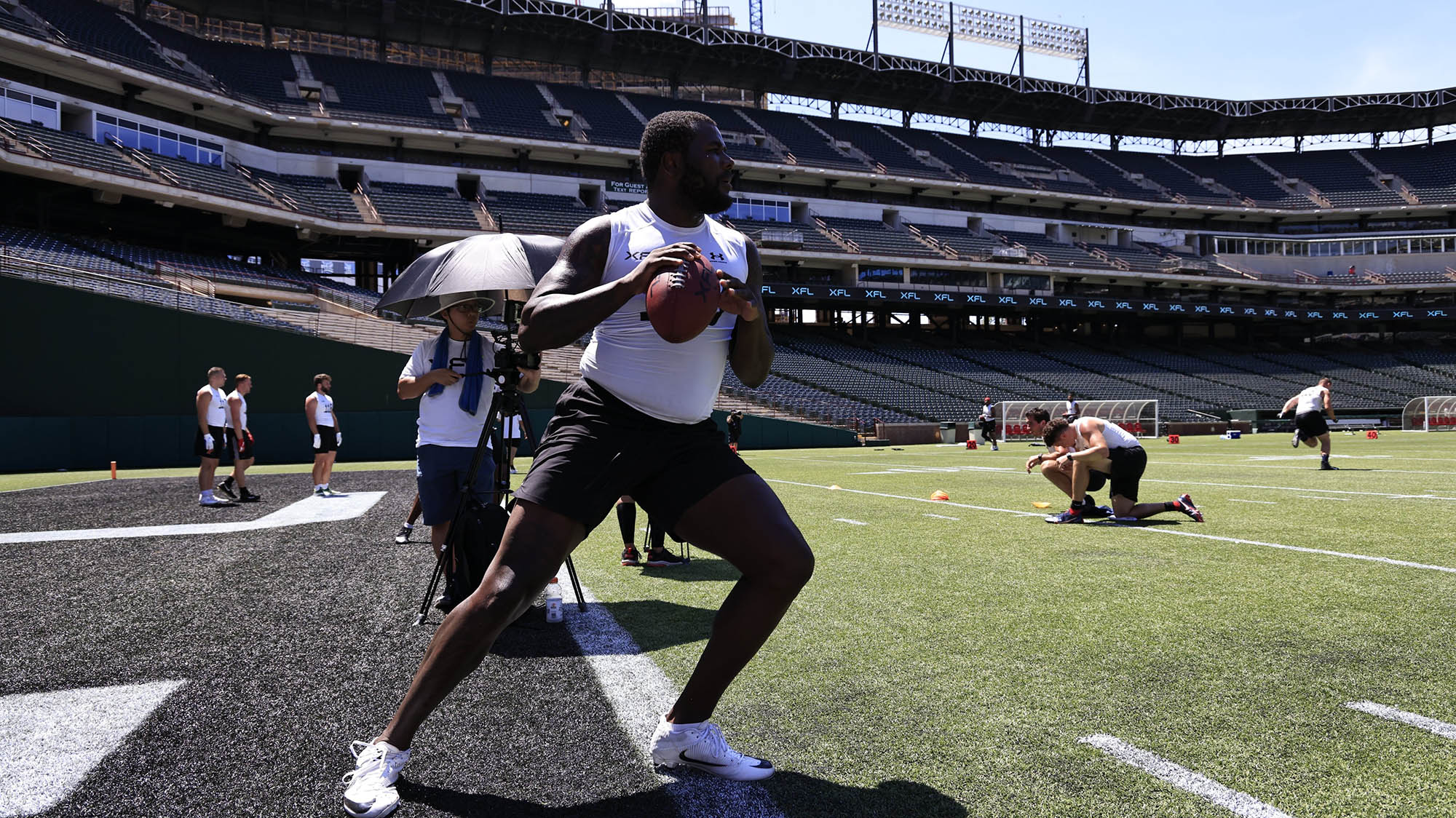 With XFL showcases completed and draft invites going out, on social media we see former DC Defenders quarterback Cardale Jones courting the XFL with his services. The XFL is not shy, and they replied to Jones with the careful inspection of a monocle emoji… at least their social media manager did.

Initially, we were not sure if Jones had attended a showcase, as it was only rumored. Then an image of Cardale working out at the showcase held in Arlington, Texas appeared on the XFL’s social media feed.

If the XFL’s social media manager has taken a look at former Defender’s quarterback, then we should probably see his name called in the draft, right? Well, maybe that is not a sure thing.

Certainly Jones has the pedigree to succeed. At Ohio State, Jones came in off the bench to relieve an injured JT Barrett, and heroically quarterbacked the team to a National Championship in 2015. This gave Jones enough juice to become a fourth-round pick of the Buffalo Bills in the 2016 NFL Draft. But he never took off in Buffalo, completing six passes for 96 yards and an interception before being dealt to the Los Angeles Chargers in 2017 and the Seattle Seahawks in 2019.

In 2019, Jones was selected as one of the eight marquee quarterbacks who were assigned to each XFL team. Today, he is only one of that pack who is still vying for a job with XFL 2023, as others such as Landry Jones, Matt McGloin, Connor Cook, and Aaron Murray have retired. Jordan Ta’amu and Luis Perez are doing well in the USFL. That leaves Brandon Silvers and P.J. Walker who may be looking for an opportunity, although Walker is still with the Carolina Panthers, he is reportedly “on the bubble.”

Earlier this year, the headlines announced how Cardale Jones had signed with the Edmonton Elks of the CFL, ironically sliding into an Elk’s spot once held by a now retired JT Barrett.

An Edmonton Elks YouTube video showed a Jones that seemed put together and ready for a new challenge. He was just becoming aware with the differences in the CFL game, and had not yet familiarized himself with his competition in camp.

Jones lasted about eleven days with the Elks before he was dismissed from the Great White North.

Maybe Jones was not ready for the great Canadian challenge, or perhaps his agent was asking for more loonies than the skinflint Elks could afford. It was well-known how the Elks won the free-agent bidding war for 2021’s top receiver Kenny Lawlor, and this may have emptied their piggy bank. A cheaper quarterback may have been necessary. Interesting, we are now halfway through the CFL season and the Elks are finding out how much they need a decent quarterback.

The flight back from Edmonton may have been when Jones submitted his application to attend an XFL showcase.

Nobody in the XFL can overlook how Jones did as the starter for the 2020 DC Defenders. Prior to the season, Jones was the golden child of the XFL, making the DC team an odds on favorite to win the championship.

In the first game of the new XFL, the Defenders hosted Seattle at Audi Field. Jones had his coming out party in a 31-19 drubbing of the Dragons where he completed a respectable 16 of 26 passes for 291 yards, two touchdowns and no interceptions. Jones had arrived.

In game two of the season, the New York Guardians came to Audi Field, where the Defenders beat them 27-0. Cardale Jones had a very productive game, finishing 23-of-37 passes for 276 yards and two touchdowns. With a 2-0 record, the Defenders had taken control of first place in the East Division.

In week three of the XFL, the Defenders visited the Los Angeles Wildcats where Jones was intercepted four times. Backup Tyree Jackson was brought in to relieve Jones in the fourth quarter, where he engineered DC’s only touchdown drive making the score a slightly more respectable 39-9 for the Wildcats. Jones finished the game sacked four times and completed 13 for 26 passes for a paltry 103 yards.

In week four, the Defenders visited Tampa Bay and Jones was again listless and ineffective, resulting in a 22-0 shutout on behalf of the Vipers. Jones only completed 9 of his 22 pass attempts, which resulted in 72 yards and one interception. More importantly, the Defenders handed the Vipers their first win.

In week five, the final week of the shortened 2020 XFL season, the Defenders were back at home hosting St. Louis. DC started Jones, until a first quarter interception caused them to switch quarterbacks to Tyree Jackson. Jackson stayed in at quarterback for the remainder of the game, leading DC to a 15-6 win over the BattleHawks.

Perhaps Jones would have gotten it together in the second half of the 2020 XFL season. We will never know.

With Cardale Jones attending a 2022 XFL showcase, a workout that used advanced technology to measure players performance, and analyze mechanics, decision makers in the league are extremely knowledgeable in the readiness of Cardale Jones, especially in comparison to his peers vying for the same quarterback jobs.

They could analyze the data and see if it may be worthwhile to take a chance on Jones. However, such a decision often takes on more of a gut-instinct notion as opposed to Moneyball style analysis.

Will there be an XFL part two for @CJ1two? We shall soon see how XFL coaches and DPPs feel about Cardale Jones.