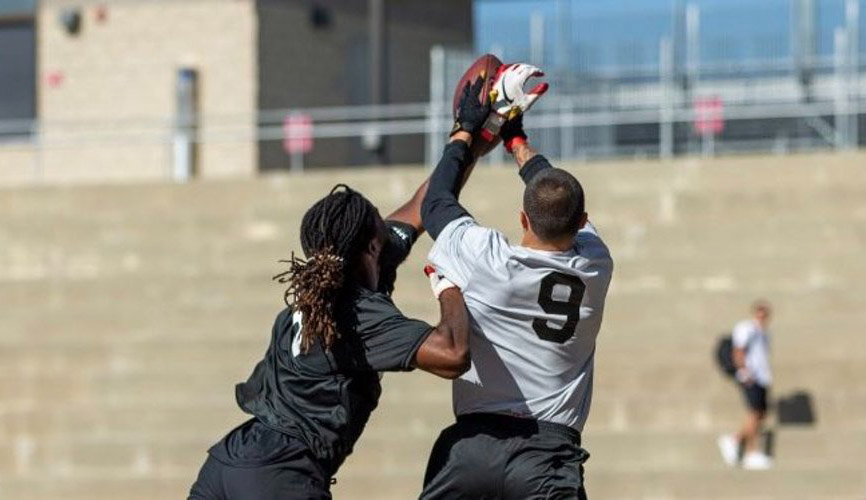 A recent participant in the XFL showcase in Arlington, Texas, he was one of the first players to share his performance data online. Seeing where he stood among his peers was something Castilleja was seeking.

@breakawaydata finally came in from the @xfl Showcase in Texas. I am a big numbers guy, and numbers don’t lie.

“In three of those four categories posted, I was in the 90th percentile. Max speed, I was in the 99th percentile,” Castilleja pointed out. “It’s a good tool to reflect on yourself, but to compare yourself where you’re at with everyone else, too. And how you stack up against the competition.”

The Breakaway Data video and analytics Castilleja posted is a true testament as to how fast this athlete can accelerate while running a receiver route, something which would surely take a defensive back by surprise.

Since playing quarterback at Hearne High School in Hearne, Texas, Castilleja has had to re-invent himself many times on his path to becoming a receiver.

“When I left to go off to college, that’s when my position changed. I started off as a safety in college,” Castilleja explained. “I really didn’t know what position I was. I was just an athlete, I honestly could play any position on the field.”

While at Southwestern University, Castilleja also ran track. He later transferred to Texas A&M with the hopes of walking onto the football squad, but was turned away, twice. To stay involved with athletics he wound up competing on their powerlifting team. However, his eyes were still focused firmly on football.

After two years in the Texas A&M powerlifting program, Castilleja again turned his attention to football. He was accepted to SMU, where they planned to bring him into the football program as a walk on, but there was a snag.

“Everything was set, I had my next football opportunity. But being a walk on I wasn’t going to be on a scholarship, and I had to see how much money I could get for academics,” Castilleja explained. “I only had two years left, and academically they were going to pay for one year. But another year would have been out of pocket. I think at that time tuition was $54,000. I couldn’t afford that.”

Castilleja was forced to stay at Texas A&M for the remainder of his college career.

While still in college Castilleja was given the opportunity to work out as a defensive back with the Texas Revolution, of the Champions Indoor Football league. He was later invited back to their mini-camp in 2018. However, when he and his wife had a baby on the way, he had to make a choice to serve family before himself, hoping another football opportunity was ahead.

At the end of 2018, now playing the position of defensive back, Castilleja went to a round of The Spring League in Miami. Right after that, he attended the American Patriot League showcase in Houston. With advice from football veterans, he decided to switch to wide receiver.

“I dedicated an entire year to making a successful transition from defensive back to receiver. I wanted to make sure that when I put myself out there in front of scouts that it looked like I’ve been playing the position forever. And it worked,” Castilleja said. “In 2020, I went to The Spring League in Las Vegas, and that was my first showing as wide receiver. I ended up earning a Coach’s Choice Award there.”

“In 2021 I had a few opportunities. I went to the National scouting combine in Indianapolis, and I played in the Black Diamond showcase in Dallas,” Castilleja said. “A lot of this was just me getting my name back out there.”

More recently in 2022, Castilleja attended the HUB Football camp, where they reviewed his performance as, “Great footwork and athleticism. Quick learner and can fit into any system. Will represent any organization with the utmost class, professionalism, and effort.”

In April 2022, Castilleja went up to Winnipeg for a workout with the CFL’s Blue Bombers. In June, he was invited to play with Team America at the Global Games in Dallas.

“At the Arlington showcase, Dwayne Johnson was there,” Kyle recounted. “He came out and spoke to the offense right before our session, and give us a few words that really resonated with me… you know, being 54th man, and always being told you were good, but not good enough.”

With Castilleja, The Rock was speaking directly to the heart. It was like Johnson was describing his athletic life.

“Regardless of what happened,” Castilleja continued on with what The Rock had said. “Whether we make it to that, whether we have another opportunity, or whether this is the end, to take that same passion and dedication we have, and apply it to other aspects of our life.”

For Castilleja it was a humbling experience to meet Dwayne Johnson, however he was equally impressed to meet the XFL coaches.

“I got to run routes and compete in front of guys like Hines Ward, Rod Woodson, Anthony Becht, Bob Stoops, Wade Phillips, and they’re assessing your talent,” Kyle said.

More importantly, Castilleja was impressed by the performance analysis done by Breakaway Data.

“Breakaway Data was new to me. I’ve never experienced that before,” Castilleja said. “I’ve gone to workouts before, when they test us on the 40, and they track our velocity, but that’s a straight-line speed… Breakaway data was different, which was exciting for me because I could finally put numbers to my route running.“

“I’m very pleased with Breakaway Data and what they were able to provide us with,” Kyle said.

With a showcase under his belt, and real numbers demonstrating just how hard he has worked to improve his athleticism and performance as a receiver, Kyle Castilleja is hoping the XFL is interested in his services and will invite him to their draft this fall.

“I pray for it, and I can hope,” Castilleja said. “I put in the work and I’m doing what I need to do. And that just goes back to controlling what I can control. I can’t control if they want to give me an invite or not. I can’t control whether I fit into a coaching system or not. But, I can control the effort that I put in, and the product that I put out on the field.”

As you read this story, you might have been impressed as to how far Kyle Castilleja has gotten without being handed anything. He has achieved everything through his own persistence and drive.

“Every opportunity I’ve had, I’ve had to fight tooth and nail,” Castilleja said.

If you’d like to hear more from Kyle Castilleja, check out the XFL Xtra podcast:
Episode 42 “Breakout and Breakaway” with guests Steve Gera and Kyle Castilleja

@XFL2023 @TheRock I’ve always led my life by the motto Faith, Family, then Football. Understanding I am never bigger than the people around me but realizing the opportunity to make an immediate impact on every person I meet. July 24, I will make my impact. See you soon 🫱🏽‍🫲🏼 pic.twitter.com/y5SRt07zWa