As we await the XFL’s official announcements, let’s cut through the rumors.

The XFL, who are the cagiest of all cagey football leagues, continues to be tight-lipped about where they will play in 2023. Instead of blurting out their intentions, something the fans of the league are clamoring for, the XFL has chosen to get their ducks in a row before they make any major announcements.

Indeed, there is a precedence for this routine, and you don’t even have to go outside the XFL to find it. In 2000, the first XFL made a splash when they told the world they would play in San Jose, California. A few months later they had to backtrack and admit they needed to move the team to nearby San Francisco. Certainly, the league couldn’t pass up the opportunity to play in the brand new “Pac Bell Park.” However, their indecisiveness looked amateurish, and another reason for people to mistrust the fledgling league.

XFL 2023 doesn’t want any bad press. One thing they realize is to forge a path to kickoff similar to XFL 2020, a path that is relatively problem free, and devoid of any backtracking or obvious miscalculations.

A few weeks ago there were rumors of the XFL planning to play the 2023 season in a “hub city,” much the same as the USFL is currently doing in Birmingham, Alabama. Rumors came from a “highly placed inside source,” and there must have been some truth to this?

The idea of a “hub” all but vanished last week when the XFL announced they had hired Erica Muhleman as Senior Vice President, Team Services. The league also went out of their way to point out she, “Will act as a liaison between the league’s business operations departments and all eight teams,” and she “will manage day to day business operations for each of the XFL’s eight teams, including developing a consultative model to optimize market inputs and executing growth strategies in local markets as the XFL prepares for its 2023 season.”

Face it, the “hub” concept may have been on the table at one point in time. However, much like the mashed turnips at Thanksgiving dinner, nobody feasted on the “hub” concept. Surely, a hub would be much more cost effective, but the trade-off in lowered fan support cannot be overlooked. Just look at the lack of crowds in most USFL games. Even they must be wondering if they missed the boat by organizing games in a hub city.

As for the “Hub City” rumors, according to her LinkedIn profile, the XFL hired Erica Muhlemann much earlier in April, meaning they would have written a job description many weeks prior to the hiring process. The XFL knew long ago they needed to hire someone who could “develop a consultative model to optimize market inputs and executing growth strategies in local markets.” Too bad the “highly-placed XFL insider” wasn’t on the hiring committee.

All the best to Erica. We know you must have your hands full getting all this ready for the 2023 season.

First, the XFL has repeatedly said the 2023 season would feature eight teams, as did the previous incarnations of the league.

It does not seem so. There has been substantial hints that the XFL will be going to San Antonio and Orlando, and the leaks happened when they began to hire coaches.

Reggie Barlow was rumored to go to a San Antonio franchise.

Multiple sources have told me that Barlow has left #VSU to become the new Head Coach of the San Antonio franchise of the @XFL2023!@CBS6

Terrell Buckley was rumored to go to an XFL franchise in Orlando.

Terrell Buckley is expected to be hired as head coach of the Orlando XFL team, a source tells @on3sports.

Buckley, a former NFL star defensive back, was most recently a defensive backs coach at Ole Miss, Mississippi State and Louisville.https://t.co/k5bN5NhJoE

Meanwhile, ex-Houston Roughnecks head coach June Jones spilled the beans that he would be the Offensive coordinator in Seattle. 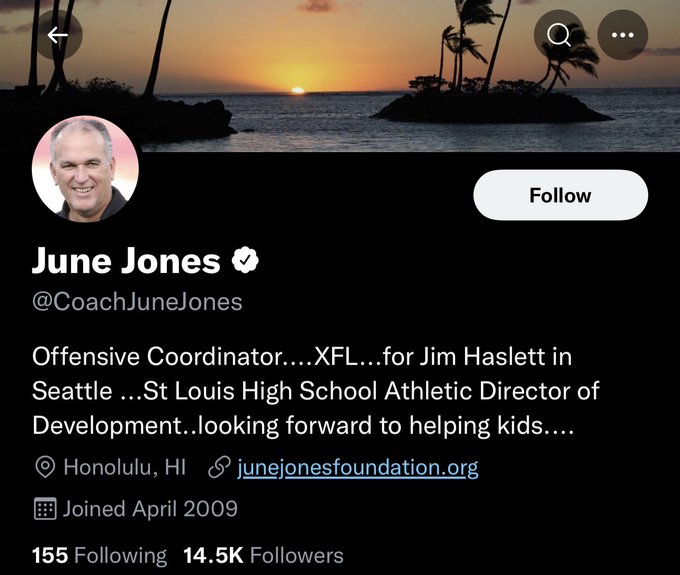 With June Jones confirming Seattle will be back in the fold, what about the remainder of the eight 2020 teams?

Based on a recent conversation with an unnamed ex-2020 official, it was clear that the new XFL is giving up on the New York, Los Angeles and Tampa Bay markets.

It was well-known that Vince McMahon had insisted that the XFL needed to invest in the Los Angeles and New York markets, being vital to the league’s long-term success. Even as the XFL 2020 season was half over, the league had a plan to continue on in New York and Los Angeles and play in those markets. In New York they felt they needed to switch to a smaller stadium. In Los Angeles, they felt they needed to “pay the dues that were needed to break into LA.” Much of XFL 2020’s confidence in those two markets were based on highly-respected analytics the league was compiling, including fan satisfaction statistics.

As for a lack of fan support in Tampa Bay, on March 20, 2020, just days after the pandemic was made official, Tom Brady signed with the Tampa Bay Buccaneers.  At the time, XFL officials felt the Tampa Bay Vipers would be able to capitalize on the local market’s expected interest in the game of football.

XFL 2020 had plans for Tampa, New York and LA. Of course, Coronavirus had different plans, and that league failed to continue.

What does the rumor mill say?

As of today, the spate of rumors flying around is pointing toward XFL 2023 playing in these eight markets:

We await the official declaration from the league, which should be coming soon.

UFPA Works to Represent USFL Players
To sell its brand of football, the XFL is counting on “The Rock”