“I think transparency helps. I think sometimes it’s circumstance. Sometimes things just happen that are out of your control.” Blandino explained. 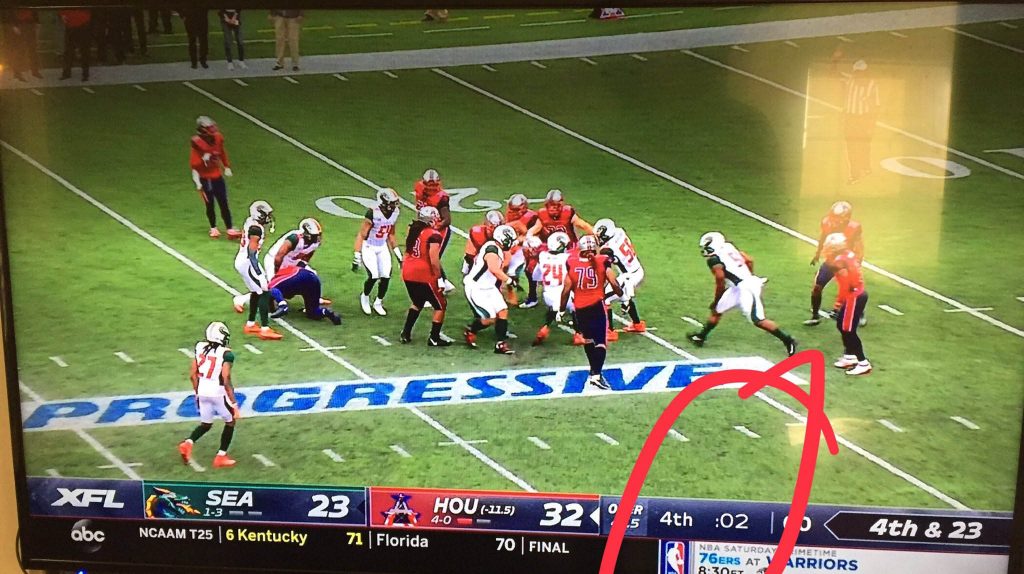 Saturday’s Seattle-Houston game ended prematurely while there was still a chance for Seattle to attempt a play that may have tied the game. (Twitter: Tim Donnelly)

In the first three weeks of the inaugural XFL season, officiating went off without a hitch. Calls were made by on-field officials, and many were quickly confirmed by the official in the booth, while many other decisions were overturned. All the while, as booth decisions were made and transmitted to on-field officials, the conversation was also broadcasted to fans, creating a chain of communication that was open and transparent.

Fans loved it, especially since the XFL is the first league to be so transparent in their officiating decisions. On top of being good communication, it also gave fans a special insight into game. It was like they were now a part of the decisions.

However, week 4 of the XFL marked the first “blown” call under this system. It was in the 2nd quarter of the “Texas Showdown” between the Dallas Renegades and the Houston Roughnecks where Dallas tight end Donald Parham reached out over the goal line with ball in hand, and was awarded a touchdown. However, a replay showed that the ball had slipped out of his hand just before it crossed the goal line. Unfortunately, even though all scoring plays are supposed to be reviewed in the XFL, the touchdown stood, and the reason behind the decision was not immediately explained.

Suddenly, fans saw the XFL not being open and transparent about a call.

Fortunately, a short time later, Dean Blandino, the Head of XFL Officiating, was seen on the broadcast admitting the play should have been reviewed, and that the league would strive to do better in the future.

After the week 4 Blandino explanation, all was well again. After all, fans could not expect the XFL to get it right every time, could they? Besides, they were working on it, right?

Unfortunately, in week 5 of the XFL, ugly officiating made a return to further haunt the league.

At the end of a thrilling Houston Roughnecks game against the Seattle Dragons, Houston quarterback PJ Walker attempted to kill off the game clock on 4th down, and kneeled with two seconds still left to play. Officials declared the game ended and even left the field. Meanwhile, the broadcast media was crying foul, as 2 seconds was enough time for the Seattle Dragons to attempt one last play into the end zone, and if successful, there would have been the potential to tie the game.

Fans were not impressed. Most were disappointed that they were left with no explanation, other than the broadcast media interpretation that the Seattle Dragons had been cheated.

Why does the #XFL have a sky judge if they can’t put 2 seconds on the clock to accurately end the game?

On Saturday evening, a few hours after the game ended, the XFL released the following statement:

“Saturday’s Seattle Dragons-Houston Roughnecks game should not have ended as it did. Replays showed clearly that the knee of Houston quarterback P.J. Walker touched the field, rendering him “down” and the fourth-down play officially completed, with approximately two seconds remaining on the clock – effectively turning the ball over to Seattle on downs. With a nine-point differential in the score, Seattle was denied an opportunity to tie the game. The XFL sincerely regrets this error. In addition, Wes Booker, who served as Officiating Supervisor for Saturday’s game, has been reassigned.”

Clearly, the XFL is striving to maintain the perception of transparency, something that has been a hallmark of their officiating in the early part of the season.

In a post week 3 interview, Dean Blandino remarked that transparency was the goal, and he hinted that having top officials was part of the XFL’s success up to that point in the season.

“I think transparency helps. I think sometimes it’s circumstance. Sometimes things just happen that are out of your control.” Blandino explained. “But I think we’ve got a really good staff of officials. All of our officials are division one college football officials and they’ve been very good for a very long time, and they’ve really worked hard to pick up the XFL rules.”

Still, the impression is that this is a work in progress. Based on the XFL’s reaction to the latest incidents, they appear to be working hard to make necessary corrections.

But will the fans understand? Probably. A certain level of understanding has already appeared in the XFLBoard discussion forums:

At least they admitted the mistake and there were consequences.
— Metallifreak10

I really have to admire the league for stepping up and taking responsibility for the error. Undoubtedly, this same incident won’t ever happen again in the league and at the end of it all, that’s all we can really hope for or expect.
— Firecop

Clearly, the fans can be led to understand these type of situations, if the league remains open and transparent in their decisions.