What We Learned After Dallas’ Third Loss

Saturday was suppose to be a pivotal moment in Dallas’ season as quarterback Philip Nelson was suppose to jump into the starting lineup and lead them to a win in front of 15,950 fans at Globe Life Park. 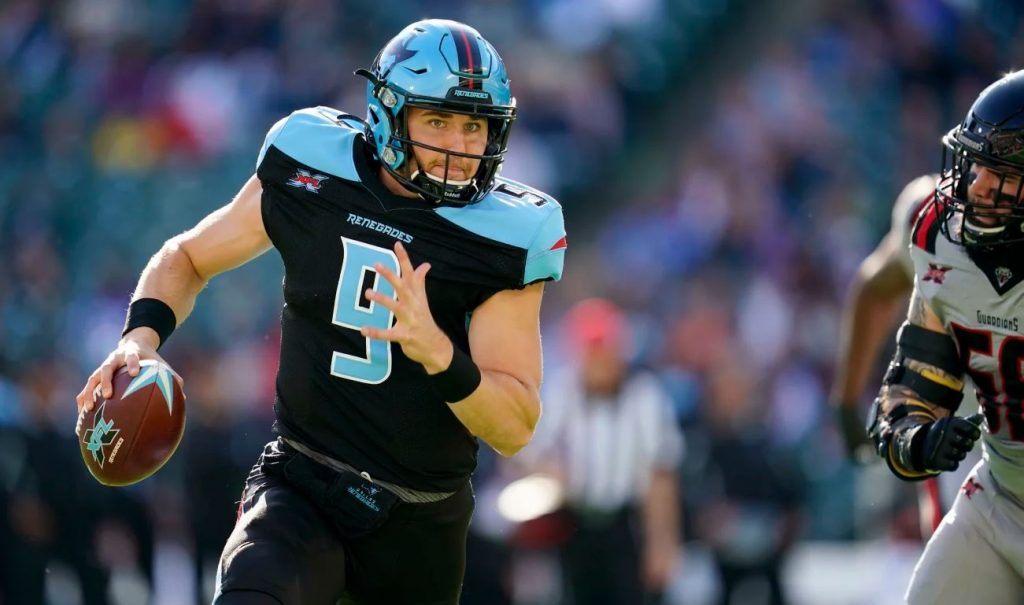 Saturday was suppose to be a pivotal moment in Dallas’ season as quarterback Philip Nelson was suppose to jump into the starting lineup and lead them to a win in front of 15,950 fans at Globe Life Park. The defense was suppose to shut down the running game and pressure Luis Perez. Coach Bob Stoops was suppose to get his first home win of the season with the Renegades. None of that happened.

Dallas lost a third straight home game to the New York Guardians 30-12 to drop their season record to 2-3 on the year. The team will be spending the next two weeks on the road going to DC and Tampa Bay. Landry Jones is expected to miss at least one more game before possibly returning in week seven against the Vipers. Even though the final score looked to be a complete blowout for Dallas, they surprisingly were in the game for the most part. Fans did get to learn a little bit more about this team that will need to be addressed as they head into the back half of their schedule.

Should the Quarterback Situation be Evaluated?

It’s natural and normal after a loss like Dallas suffered that fans would want to see a change at the quarterback position. Arguably, Philip Nelson did not fair well in his second start of the year. He finished the game 28 of 49 for 210 yards and two interceptions. The offense with Nelson was not able to produce much in the second half. Dallas looked good in the first half as they were able to move the ball down the field, but ultimately could not get in the end zone similar to week one against St. Louis. That is a combination of play calling being conservative and the offense just not being able to establish the passing or running game.

From the fans’ perspective, changing a quarterback would not make a difference in how the team looks. Eric Dungey can jump in the game and make some plays with his arm strength and feet. Dungey brings a different dynamic into the offense that could give them the spark they need. Plus, it would only be for one week before Jones returns in week seven. What’s the harm in giving Dungey a shot at quarterback? The team could also trade for someone like Connor Cook or Quinton Flowers, but it might be too late to bring someone in from the outside to learn the offense in one week.

Looking at the other side of things, Nelson is more comfortable in the offense than Dungey or Brogan Roback. Both guys have been in and out of the team. Dungey has been dealing with personal issues off the field during the season that has kept him from being with the team. Roback has bounced back and forth from Team Nine and the Renegades so he hasn’t been with the team for half of the season. Nelson is the only healthy quarterback who has been with them since the beginning so go with the one that has the most experience and give him an opportunity to redeem himself.

The Air Raid offense is designed to throw the ball often and use their running backs in the passing game. Offensive coordinator Hal Mumme has perfect it for decades as a coach, but something is missing in this offense. The lack of a running game is evident and it’s frustrating for the fans. Cameron Artis-Payne and Lance Dunbar had establish themselves as one of the best duos in the league. They combined for eight carries for 31 yards. It seemed like once they had a bad run, the Renegades would throw it multiple times in a row. The two never had a chance to get it going.

Moving forward, play calling needs to adjust to the weapons that the backfield offers. Artis-Payne is a solid runner who has proven to be one of the best in the XFL when he is fed the ball. Dunbar is a great runner on the outside as he can use his speed off the edge to get past the front seven. Mumme has to know what he has and use them more often. Especially since the passing game is struggling to pick up so they need the running game to help open up the offense.

Receivers Need to be More Involved

It’s been the Donald Parham and Lance Dunbar show for the most part in the passing game. The only consistent receiver for the Renegades through five games is Flynn Nagel. All the other ones have been under used and somewhat not involved in the offense. Most of the plays being called are screen passes and short passes in the flat. Explosive plays was suppose to be the identity of this team since they have so much speed at receiver. That clearly hasn’t happened so far. Freddie Martino did have a big 32 yard catch in the first half that gave fans some hope for the best. That was it for the team though.

With play calling once again being questioned by fans, they can hope that bigger plays can be developed during the game and take more shots down the field. Jeff Badet was brought in to Dallas to create those long pass plays down the field and he has yet to explode onto the scene. Nelson and Jones aren’t afraid to bomb the ball so let them do it and create a play that can get Badet down the field.

Rush Defense Needs to Bounce Back

Dallas’ linebackers are athletic as they can cover with the best of them along with the secondary. The problem with them along with the defensive line is not being able to stop the running game. New York Guardians’ running backs Darius Victor and Justin Stockton was able to break out nice runs as Dallas didn’t have an answer for them in the second half. This is becoming a common problem for the team as they struggled to stop St. Louis, but since then was good until Saturday. While they may not allow as many yards on the ground as other teams, it’s a small thing that could become a big problem if it isn’t addressed right away.

Secondary Continues to be a Strength

Josh Hawkins and Derron Smith have been so important to the defense all season and have been playmakers for the secondary. They have made PJ Walker look human and have been able to shut down many passing games. Even though New York won, outside of the 80 yard touchdown pass play from Luis Perez to Colby Pearson, Perez was not able to get much going. Good pressure by the defense and shutdown coverage made Perez’s life miserable. Defense has been the strength of this team and has kept them in every game this season. If the offense can reduce the turnovers and hold on to the ball longer, the defense could be even better.

Special Teams Has Been Strong All Season

Austin MacGinnis has been the most consistent scorer for the team as he remained perfect on the season in field goals as he is now 10-10. He has been called upon early in games to get the offense some points on the board. Austin Walter broke out a huge 97 yard kickoff return for a touchdown against New York to get them back in the game. It was all for nothing, but big plays is what this team has been missing and he provided that.

Bob Stoops is Handling This Team the Right Way

This season has the potential to get out of hand for Dallas, but Bob Stoops has provided the leadership this team has needed to avoid that. Stoops has said all the right things in taking responsibility for this season and showing frustrating for not being able to bring home a win at Globe Life Park. If there was any coach in the XFL that can get their team back on track, it’s going to be Stoops. He knows how to win and what it takes to do it. They have an opportunity to get it done against DC in the nation’s capitol in week six.