Welcome to the Playoffs! 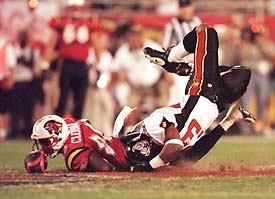 WEEK TWO REMATCH
Dialleo Burks of the Orlando Rage and Brandin Young of the San Francisco Demons scramble for the ball at the start of the Week 2 game. Photo: Allsport

Orlando – (12 April 2001) — It is now time to separate the great from the good. This is the XFL playoffs. This week two teams will battle it out for a lot of cash, and the opportunity for more so look for the intensity to be higher than anything you have seen so far.

If the Rage are going to win the next two games at home, Orlando will have to step it up a notch against San Francisco. The Rage finished with the leagues best record of 8-2, and the Rage are undefeated at home earning homefield advantage throughout the playoffs, including the Million Dollar Game that will decide the league champion. Last week however, the Rage took a beating from the Enforcers in Chicago losing 23-6.

“We’re disappointed that we didn’t win our final regular season game, but it doesn’t diminish what this team has accomplished,” Orlando Rage Head Coach Galen Hall said. “We have a tremendous challenge in front of us, but this team has responded to adversity all season. We’re going to regroup and get ready to play a very good San Francisco team.”

In order for the Rage to regroup they will have to rally around QB Brian Kuklick. Kuklick came in for starter Jeff Brohm, whose season ended early with a grade-3 separated shoulder in week 7. By the way, Jeff’s surgery was a success. Orlando is 2-1 with Kuklick as the starter, but he leads the XFL in interceptions with 10. Rage Head Coach Galen Hall has shown all the confidence in the world in Brian’s abilities and believes he can lead the team to the championship. “We’re a little upset that we lost the Chicago game.” QB Brian Kuklick said. “In retrospect, we didn’t make any plays out there and that’s what cost us. It wasn’t like they dominated us. The difference in the game is that they made some plays and we didn’t. We’re still excited to be in the playoffs and excited about having home field advantage. I think we’re a different team at home.”

On the other side of the ball is Demons QB Mike Pawlaski. Although he struggled in his last game, Pawlaski is one of the top passers in the XFL. The Rage will need to keep pressure on Pawlaski and try to get him off his game. Pawlaski likes to drop back and get the ball out quick. Our D-line will have to get in there quick to break the rhythm. Pawlawski completed passes to more than 15 different receivers this season, but Jimmy Cunningham remained a favorite target. Jimmy had a huge game against Orlando in Week Two with 10 catches for 95 yards and one touchdown. On Saturday the Rage will have to dust themselves off and show the Demons why we are undefeated at home. “This team has bounced back all year.” RB Michael Black said. “Sometimes from losses, sometimes from winning but not playing well. I know this team has the character to come back and play a great game next week. Our goal from the beginning of the year was to make the championship game and win it. Regardless of whether we had beaten Chicago or not, nothing has changed. We still need to beat San Francisco to get to the championship game.”

Also coming to the Citrus Bowl this Saturday will be the XFL extra-point rule changes. Following a touchdown, teams may elect to run or pass for a one-point conversion from the one-yard line, a two-pointer from the five-yard line or a three-pointer from the 10-yard line. A defensive team returning a turnover into the end zone will earn the attempted point total. I think it is a little strange to implement these changes now for the playoffs, but we will have to see.

While I was talking to several players at a charity luncheon this week, I mentioned the new rule change, and all agreed it was a little strange to change it right before the playoffs. Also the attitude I got from every player was that they are ready to step it up and do whatever is necessary to win this next game. They also said there was nothing like playing at home. All the players agreed that Orlando has the loudest and most rowdy crowd in the XFL. I am sure Orlando fans will make the return of the Demons to the citrus bowl as unwelcome as possible.