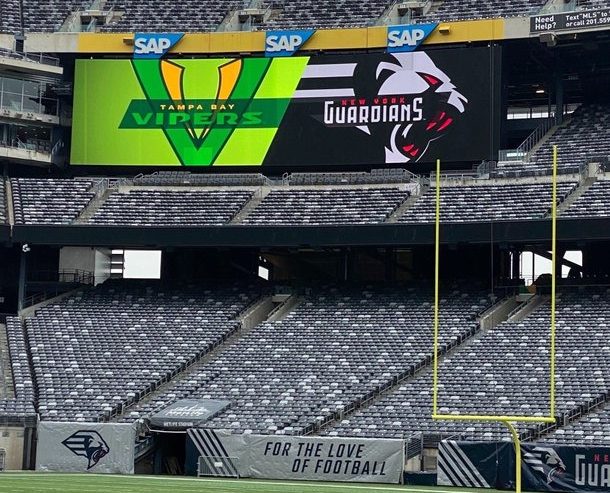 The Guardians and Vipers will be taking the field Sunday without some of their best-projected targets in the passing game. New York Wide Receivers DeAngelo Yancey and Tanner Gentry are on short term IR and have yet to practice, although they have done some light work on the side. Barring any change in their status, it appears at press time, that New York will be without two of their projected starters on offense. For Tampa, Antonio Callaway, unfortunately, suffered an injury in practice leading into this game and was placed on injured reserve.

New York and Tampa released their depth charts for week one on Thursday: (starters in bold print)

Tampa will be employing a 4-2-5 defense under Defensive Coordinator Jerry Glanville. The legendary Glanville has a long history of using an aggressive man coverage style of defense. Look for Kevin Gilbride to take some shots down the field against Tampa’s secondary. The Guardians have receivers who can beat man coverage and make contested catches down the field in the likes of Mekale McKay and Teo Redding.

In the Guardians’ live scrimmage against the Vipers.  New York showed hints of their attack against Tampa by repeatedly challenging the Vipers corners deep and connecting on big plays. One player who could be targeted by New York on the Tampa defense is recently converted corner Rannell Hall. The former wide receiver has blazing speed and great athleticism, but he’s still a novice at the position. Also, look for New York to run against Tampa’s nickel set.

If there is one coach who is adept at having successful offenses operate with a shorter play clock (25 seconds). It’s Marc Trestman, and he did it with success winning multiple championships in Canada. The Guardians are huge upfront on the defensive line, but a sped up offense can wear down those types of players quickly. Being able to rotate in and out the likes of TJ Barnes, Joey Mbu, and Toby Johnson will be a key for New York Defensive Coordinator Jim Herrmann. Trestman will look to wear down New York’s defensive line by the fourth quarter. The Vipers have arguably the best offensive line in the league. Center Jordan McCray was the highest-rated offensive lineman by Pro Football Focus in the AAF last year for the Orlando Apollos.

New York’s defense has the advantage over Tampa’s offense from a speed standpoint. The Guardians secondary is very fast but not long in stature at the corner spot. Tampa may counter that with their big-bodied targets and its star tight end in Nick Truesdell. New York will need to get pressure on Aaron Murray and not allow him time in the pocket. New York has to force Murray into mistakes and not let him get in a rhythm.

These two teams played a full live scrimmage against each other at the end of training camp. New York “won” that game. The Guardians and Vipers meet again on Sunday, only this time the stake of the outcome is significant. There are only six divisional games throughout the season, and whether or not New York holds serve at home could end up setting the tone for the rest of their entire season. The Vipers and Guardians will meet again in the final week of the regular season in Tampa.

New Podcast: XFL Xchange Episode 1, with King Mike L and the Counselor
There’s something new on the sidelines of the XFL DC Defender’s