Walker, Parham among those with XFL ties to survive cut-down day

For fans looking for validation that the XFL worked, look no further than these players who are now making a healthy living playing the game they love. 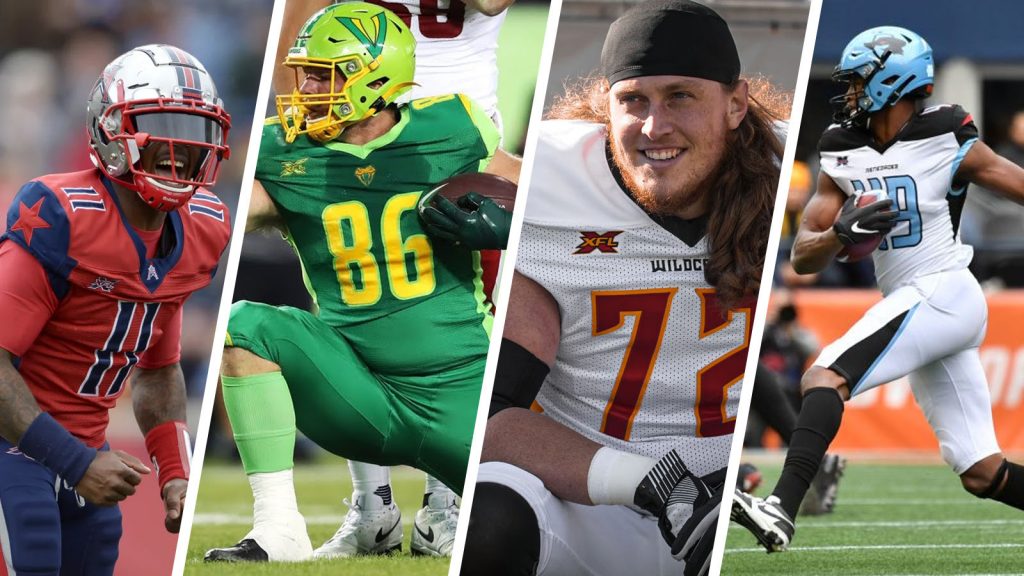 When all 32 NFL teams made the final cut-down to their initial 53-man rosters, there were four former XFL players left standing. A day later, there were only three. Two days later, that number was back up to four. Welcome to the roller-coaster world of NFL roster management.

As of this writing, QB PJ Walker (Houston Roughnecks) and TE Colin Thompson (Tampa Bay Vipers) of the Carolina Panthers, and OT Storm Norton (LA Wildcats) and TE Donald Parham (Dallas Renegades) of the Los Angeles Chargers are your XFL 2020 representatives who will begin the year on NFL active rosters. That can, and will, change as the weeks progress. In addition to those four, eleven players who ended the XFL season on rosters have made NFL practice squads. That number will change even more than the active roster count as teams tinker with that 16-player group even more often.

Of all XFL players in NFL camps this summer, Walker was probably the safest bet to clinch a permanent roster spot. He has been neck-and-neck with second-year man Will Grier for the backup QB spot in Carolina, a position that may not be clear until the Panthers release their first depth chart later in the week. Even then, the competition could continue in practice throughout the season.

Thompson was a bit of a surprise given that he was only a third-string tight end for the Vipers. His connection with Panthers head coach Matt Rhule, Thompson’s college coach at Temple, may have helped get him in the door, but Thompson earned his way onto the team with what Rhule called a “great camp.” (subscription required)

Thompson was released on cut-down day, leaving the Panthers with just two tight ends. Perhaps they were planning on claiming one on waivers but either missed out or didn’t like what they saw in that position after Saturday’s roster trimmings, so Thompson was brought back into the fold on Monday. A turf toe injury to starter Ian Thomas made acquiring a third tight end vital.

Both Norton and Parham were on the roster bubble of the Chargers prior to final cuts, but both survived. Norton, the number one overall pick of the Los Angeles Wildcats during the offensive line phase of the XFL draft, will likely play the role of swing tackle with the Chargers. On Twitter after he made the team, Norton proclaimed he wouldn’t be where he is today without the XFL (A Tweet, by the way, on which new XFL owner The Rock commented).

Usually backup tight ends are valued for their blocking, but the Chargers saw Donald Parham make too many big plays in the pass game during camp to let him loose. This may end up being more of a redshirt year for him with Los Angeles, so don’t be surprised if he’s inactive more weeks than not. While talented, he’s still raw.

The Chargers will play more multiple tight end sets this year – they opted to not keep a fullback after letting Derek Watt walk in free agency. The lack of fullback on the roster allowed them to keep an extra tight end.

It was a bittersweet weekend for Kenny Robinson, the Carolina Panthers’ 5th round draft pick (and ironically a 5th round draft pick of the St. Louis BattleHawks in the defensive backs phase). He survived roster cut down on Saturday, but after Carolina claimed three players off waivers on Sunday, he was let go to make room.

When he cleared waivers on Monday, he re-signed with the Panthers’ practice squad. Carolina opted instead to keep two rookie free agent safeties on the 53-man roster over Robinson. Kansas City signed Robinson’s St. Louis teammate, QB Jordan Ta’amu, to their practice squad.

Unlike other players in similar situations, Ta’amu likely won’t be the first call to the main roster if a quarterback gets hurt; Kansas City also kept veteran Matt Moore on the practice squad. That should tell you how much they think of Ta’amu’s potential that they’d use a second spot for a QB, keeping four overall.

RB Jacques Patrick (Tampa Bay Vipers) had an uphill climb to make Cincinnati’s opening day team, but he was brought back to the practice roster. The same goes for DT Kahlil McKenzie (LA Wildcats), a late addition to the Bengals in training camp. They saw enough to sign him up for the practice roster after final cuts.

Like Cincinnati, the Steelers have two XFL players on their practice squad after cuts: OT Jarron Jones and OT Anthony Coyle. The entire starting left side of the New York Guardians’ offensive line is now in Pittsburgh. The Steelers had a league-high six former XFL players in camp, so four others weren’t so lucky to receive a Sunday call.

Staying in the AFC North, Cleveland cut G Michael Dunn (Seattle Dragons) but signed him to their practice squad. The Browns have just one true backup guard on their main roster as of today. The Atlanta Falcons kept CB Josh Hawkins (Dallas Renegades) and LB Edmond Robinson (Houston Roughnecks) around for the practice squad. Both were competing for the final spot at their respective positions as camp came to a close.

In Dallas, Saivion Smith (Houston Roughnecks) returns to their practice squad. He was cross-trained at both corner and safety this summer, that versatility increasing his chances of being brought up to the 53-man roster at some point. Only three teams signed a long snapper to the practice squad. One of those teams was the Baltimore Ravens, and the player was Nick Moore (Tampa Bay Vipers).

Baltimore head coach John Harbaugh, as a former special teams coach, knows the value of the third phase of the game. It’s a good sign, then, that Moore was brought back. Former XFL players continue to work out for NFL teams on a near-daily basis, so consider this just a snapshot in time. But for fans looking for validation that the XFL worked, look no further than these players who are now making a healthy living playing the game they love.