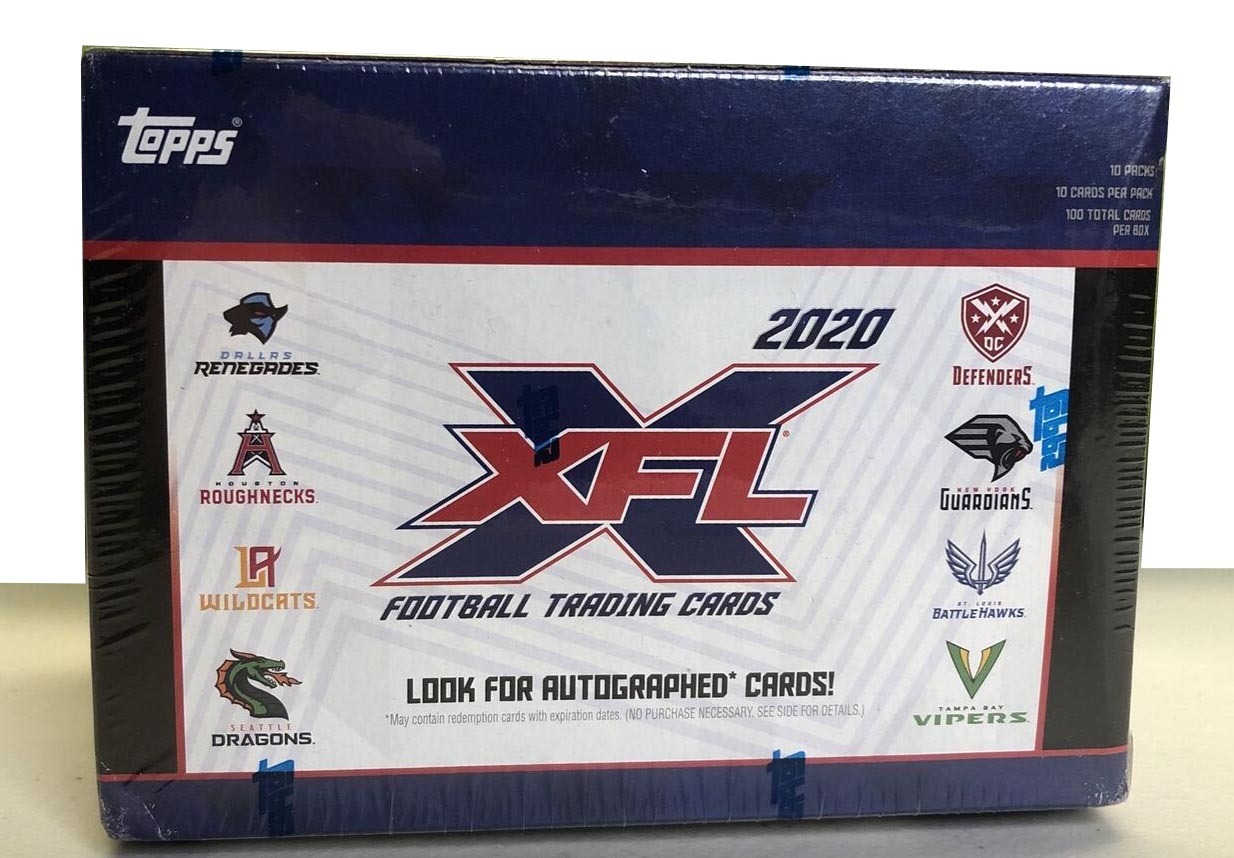 When I was in middle school, any time I had a little extra spending cash, I’d walk a few blocks to the local drug store (first it was Brooks Pharmacy, then Revco, and finally CVS) to buy some baseball cards.

I couldn’t even wait to get home to open them; I’d end up splitting into the shiny pack on my walk back. Once I entered high school, a shop opened on our town’s main street that specialized in selling sports cards and memorabilia. I spent my fair share of afternoons after school hanging out there, checking in on the latest shipments or just leafing through the thousands of singles that were available for sale.

I was a huge collector as a kid, mostly baseball and football cards. Today, I have tens of thousands of cards to my name. But I haven’t purchased any packs in the last few years. The combination of high prices and smaller packs conspired to drive away my interest. When I was younger, I figured my sizable collection would one day pay for my college; in reality, today those cards are largely worthless.

The most recent addition to my assemblage is a box of XFL Topps 2020 trading cards. I purchased the set from the Topps website about a week after Vince McMahon’s Alpha Entertainment declared bankruptcy and the league was shuttered. I have a near-complete set of XFL 2001 trading cards (many from a box purchased at a collector’s store at the mall, with the proprietor more than happy to sell it to me well after the league had folded), and wanted to make sure I picked up a box of the 2020 version before they disappeared.

Today, that box of cards from XFL 2020 remains unopened. I never could quite figure out when the right time was to open it. When it arrived in the mail, the emotions of the league folding were still too raw. It was too soon. What about when the bankruptcy began, and the league seemed to have a new lease on life? Or when RedBird, Dany Garcia, and Dwayne Johnson purchased the league? Would that have been a good time? Maybe when the league kicked off again, whenever that might be?

In the end, I decided to share my unboxing with you, the readers. Hopefully, it would provide the perfect elixir for a dead period of XFL news and give XFL Board a little content and traffic during the summer doldrums.

But I wanted to make the column about more than just tearing open a few packs of cards. The sports card industry is changing, and like the XFL, is rising from the ashes, gaining new life. I enlisted the help of my former colleague at PWTorch.com and current contributor at WrestlingTradingCards.com, collectibles expert Michael Moore, to walk me through the market for sports cards today, as well as the market, if any, for both of Topps’ XFL forays.

“The hobby first peaked in the late 80s and early 90s,” Moore told me via e-mail of the trading card field. “The bottom kind of fell out of the hobby in the 90s when companies were just mass producing junk. Prices bottomed out and a lot of casual collectors left the hobby.”

As for the resurgence of the industry, Moore doesn’t believe it’s as romantic an idea as others may think. “The recent surge in the hobby was driven by a combination of the COVID-19 pandemic, a perceived once-in-a-generation player in (NBA star) Zion Williamson and a group of venture capitalists investing in cards and inflating prices to unsustainable levels.” Those inflated prices have left consumers scrambling, sometimes violently, to stock up on trading cards, to the point Target pulled trading cards off their shelves in May.

My first impression: Boxes don’t appear to be as large as they once were. This could be the result of fewer cards being produced per set. The XFL 2020 box contains ten packs of cards, with ten cards per pack. According to Beckett online, this is a “Blaster” box rather than a “Hobby” box, which holds 24 packs. That explains the size difference.

The first card from the first pack was WR Donteea Dye of the Tampa Bay Vipers. It’s an action shot from practice as the cards were produced prior to the first game. The 2001 version of the cards had more game-play pics, either from training camp scrimmages or from very early in the season. Rounding out the first pack: CB Jamar Summers (Guardians), RB James Butler (Roughnecks), HC/GM Kevin Gilbride (Guardians), HC/GM June Jones (Roughnecks), TE Colin Jeter (Dragons), WR Ryan Davis (Vipers), RB Trey Williams (Dragons), CB Mohammed Seisay (Dragons), and OT Storm Norton (Wildcats). The Jones card has a special blue border, which, while not an insert, is more rare. In this case, it’s stamped with the serial number “9/25,” or nine out of 25, in gold.

In terms of value based on NFL success, Norton seems like the best get from that first lot. But it’s unlikely I’d be able to make much coin off of it, or any others from the box. The fact that so many players featured in these cards lacked success at the NFL level hinders their value. “Unfortunately, collectors have never shown any sort of prolonged interest in minor league football brands like these,” Moore said. “Most of the guys Topps included…were guys who had already washed out of the NFL or had gone undrafted in previous years.”

I’m looking for more success with my next few packs. Moore told me there are three autographs in each XFL hobby box, and while I only have a blaster, hopefully I can luck into an autograph or two along the way. I’m getting a lot of rookie cards, or those labeled by Topps as rookies, which I take to mean this is their inaugural card from the brand, NFL or otherwise.

Now we’re cooking! First card of pack three is P.J. Walker – not only P.J. Walker, but a P.J. Walker rookie card. And as if by kismet, the last card is his Roughneck partner in crime, Cam Phillips. There are no stats listed on the back of the cards, but a nice paragraph write-up for each player.

The 2001 XFL Topps effort reflected the image the league wanted to project, as they included cheerleaders in the set. Even as a curio, Moore said those cards aren’t in demand today. “At the time, there was some novelty interest in guys like Rod ‘He Hate Me’ Smart, but that was about it. If you search eBay’s complete listings for 2001 XFL cards, there aren’t many selling for more than $10.”

My first kicker and first duplicate came in my fourth pack: Austin MacGinnis of the Renegades (whose bio slyly mentions his work in the AAF without using those letters) and my second Trey Williams card. Still no autographs. Halfway through with my fifth pack, and I have my first Stars of the XFL insert, the only insert for this series (appearing in one of every six packs): WR Mekale McKay of the Guardians.

Also included is Luis Perez, whose action shot is with the Wildcats but the card notes he was traded to the Guardians. When I inventoried my baseball and football cards, I did so by team and always struggled which team to put cards that noted a player had been traded: The team they had been traded to, or the team in which they were pictured. Such are the difficulties of someone who always meticulously kept track of his lot of cards.

While trading cards for secondary sports leagues don’t often garner interest, it doesn’t help when others that have come before failed. That includes the first iteration of the XFL, as well as the AAF just one year before XFL 2020.

“The failure of the AAF hurt the XFL from the start,” said Moore. “Topps put out a set of AAF cards in 2019, but they didn’t even start hitting retail shelves until months after the league had folded. So when Topps produced the XFL set, there were two minor league products full of cards that people didn’t really want.”

Pack six was nothing to write home about, but pack seven included Cardale Jones (once thought to be a potential star of the league). It also included my second Stars of the XFL insert – and third Trey Williams card. Did you know he was the third-fastest running back at the 2015 NFL Combine? You do now!

The eighth pack began with Jordan Ta’amu, so that gives me both Walker and Ta’amu, the two big guns at QB in the league. I’ve lucked out in not getting too many doubles to this point. In this pack, I also came across my first green-bordered parallel card, that of the Renegades’ Darius James. That one is numbered 91/99.

Down to two packs to go, and still no autographs. Those tend to be ones worth the most – Moore mentioned a Tommy Maddox autograph from the 2001 set that held some value at one time. From the 2020 set, a P.J. Walker card is going for around $200. Younghoe Koo, the kicker for the Atlanta Falcons, has an AAF autographed card fetching as much as $100-200, a combination of his NFL success and it being his first card and thus first autograph. “The biggest concern with that is the price could drop drastically as soon as Panini produces an NFL autograph of his,” notes Moore.

As if to mock me, my final pack started out with two coach cards. One wasn’t even a head coach, mind you, but Vipers defensive coordinator Jerry Glanville, who may be the only coordinator to have an XFL card printed of him. At least he looks cool. The other was Bob Stoops, which as far as coach cards go, is probably going to end up the most valuable. I was also able to snag a Kenny Robinson in that final pack, the only XFL player to be selected in the NFL Draft.

And with that, we’ve come to the end. No autographs, only a few inserts, and perhaps even fewer cards that will end up worth more than a dime. Nevertheless, it was a nice trip down memory lane. It reminded me of those days I couldn’t wait to purchase my next pack, couldn’t wait to see what waited inside the thin layers of silver metallic wrapping. It was also a nice reminder of the five weeks in the spring of 2020 that the XFL prospered. Those memories are certainly worth more than any dollar amount these cards could bring.