UFPA: A collective voice for all football players

A collective voice will be powerful for players and leagues to communicate more effectively. 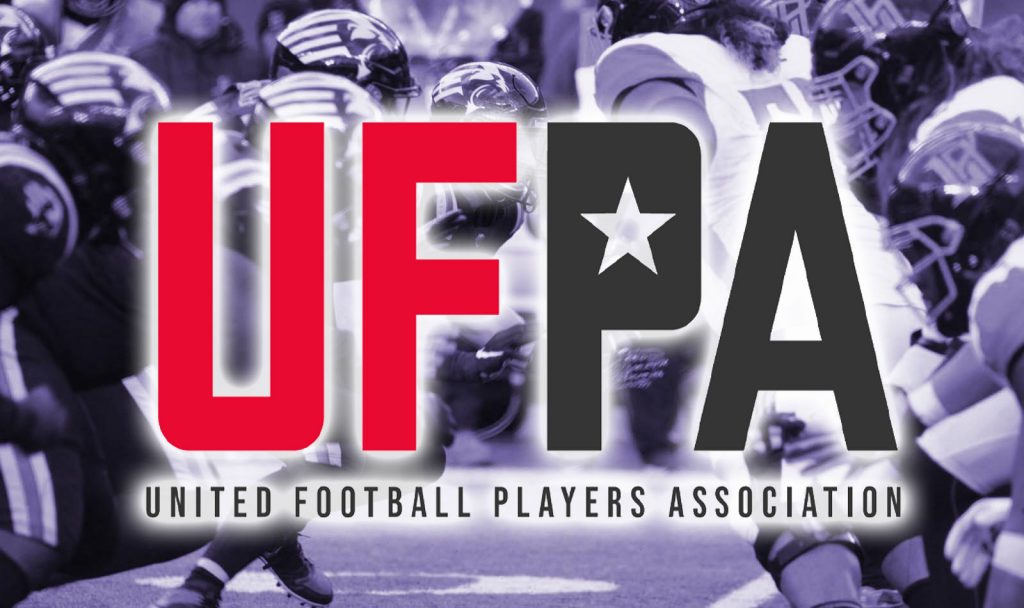 For XFL and AAF veterans like running back Kenneth Farrow and linebacker Nick Temple, playing in leagues without a player’s association has been a day to day reality. In fact, this is the reality for all football players outside the NFL (NFLPA)  and the CFL (CFLPA).

In March 2020, when the XFL cancelled its season, it caused players to reflect on the situation, and lament that they had no official organization to turn to for support.

“We kind of got together as a few players back in March, when the XFL folded,” Kenneth Farrow recalled. “There were guys that were in the XFL, that played in the AAF, and all list of experiences.”

The seed was planted, and the United Football Players Association was born.

Unlike the NFLPA, the UFPA is not a union. Instead, it is billed as an advisory organization that is meant to advise players and advocate leagues on behalf of players, especially in the realms of pay scales, schedules, safety protocols and legal concerns.

“This isn’t a union,” Farrow said. “This is a united front to try to set minimum standards, and try to make sure that everybody’s held accountable.”

Technically, the UFPA is a social welfare organization and is tax exempt under the Internal Revenue Code section 501(c)(4). This section of the tax code specifically refers to an organization that is not organized for profit, and must be operated exclusively to promote social welfare.

“We’re able to form this association with the help of a number of people who have been guiding us along the way,” Farrow said.

With the sudden demise of the Alliance of American Football still fresh in their minds, followed by the bankruptcy of the XFL, players are even more concerned over the protections they may have in the case league operations suddenly cease.

“These last two years have left guys, out of nowhere, out of a job,” Farrow said. “Then it’s been difficult for guys that had injuries to get proper treatment, because you no longer have an employer to go to.”

“Not just minor injuries, serious injuries,” Nick Temple added. “A broken leg, or a broken arm… worst case scenario, an injured neck. That’s one of the things that came across with the AAF shut down.”

Although the situation that occurred when the AAF shut down was one of the worst, players were still cut off from league support when the  XFL declared bankruptcy. It seems every situation is unique, and Farrow and Temple feel some level of player advocacy is required for all leagues, going forward.

“As soon as they went bankrupt, a lot of services were completely shut off,” Farrow said of the XFL.

“That’s a big part of the benefits of being an association as opposed to a union,” Farrow said. “We’re looking to be able to speak for all players. With the number of leagues popping up across the board, whether it’s XFL, Spring League or Freedom Football League.”

As for the XFL, it is true there was player insurance, but even that was limited.

“Player insurance was something that was kind of big, because you had guys that have families and the options didn’t really cover the families. There were definitely some things in there that we as players want to address,” Farrow said. “Whether you’re disabled after the season ends, and you need some type of lost wages or some health care benefit package because you can’t return to work. You know, little things like that are what we’ve pinpointed to bring to light with our conversations with some leagues.”

Another situation that has arisen is concerning legal points over the XFL bankruptcy. The association has begun to provide resources to players who do not know where to turn for legal advice.

“We’ve all been given legal documents on the bankruptcy case, and a lot of guys have no clue what’s going on in there,” Farrow said, although he was quick to point out the association could only help connect players to legal resources and not provide legal advice.

“All 416 of us… everybody who had a job is now facing the same situation,” Farrow said.

It sounds like Farrow and Temple have their work cut out for them in bringing the United Football Players Association to bear on football leagues. But, will the leagues listen to such an association?

“We have a meeting already setup with the XFL, and that will be our introductory meeting,” Farrow pointed out. “We look to grow from there, and not only just the XFL but leagues like the Fan Control Football League and the Freedom Football League.  There’s definitely been very good traction, and we’ve been able to speak to people high up in the NFLPA ranks, and former NFLPA Presidents. It’s been really good as far as the football community coming together and helping this thing.”

Nick Temple feels that leagues will listen to the voice of the association because it will be in their best interest to do so.

“Basically, just being that middle ground person as far as with the players, and also with upper management. Because, you never know what’s going on with players, day by day,” he said.

Temple feels that having a middleman in the communication chain will aid in player relations, which will lead to league success.

“Having that middleman to be able to communicate with the upper and middle management. I think that definitely would help league owners understand the basic requirements that will lead players to be successful in the whole season,” Temple pointed out.

It is clear that Temple and Farrow feel the collective voice will be powerful for players and leagues to communicate more effectively.

“Just to have that collective voice through a body is something that is going to be needed sooner or later down the road,” Farrow said. “Especially as the XFL continues to have its success, like we all hope it does.”

“We’ve had quite a few players sign up via the website,” Farrow said. “A lot of it has been word of mouth. In the football world everybody knows everybody from some in point time. So, that’s how it’s been able to spread as fast as it has.”

XFL Wildcat Jerimiah Spicer Joins The Spring League
XFL: We will allow kneeling as a form of protest