The XFL and the DC Defenders were a perfect showcase for Palka to get some looks and gain some recognition as a great all-around athlete. 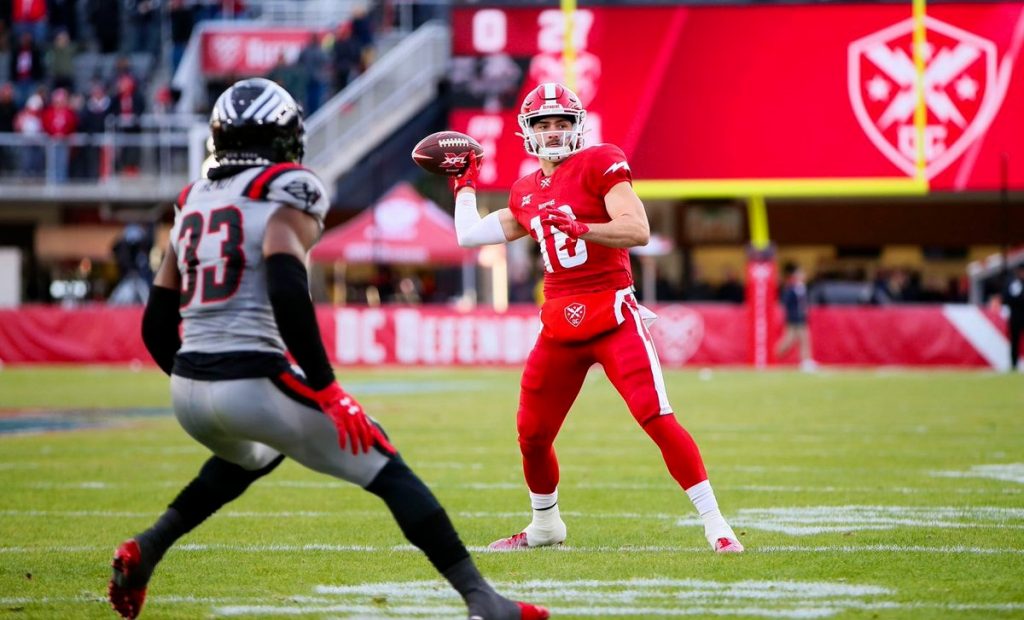 DC Defenders wide receiver Tyler Palka, a former Division II standout from Gannon University in Erie, Pennsylvania, originally played the quarterback position. However, he made the switch to wide receiver in his senior year.

This became one of the reasons Palka was a favorite XFL player to watch. If he had the ball behind the line of scrimmage there was a possibility he may pass. That always kept the opponents in check.

Palka started out his Gannon playing time as a quarterback, it was his senior year that he realized that he could start at wide receiver. Throughout his senior year, he even played in a third position, running back.

In his senior year, Palka racked up 1,121 all-purpose yards (459 rushing and 662 receiving) and scoring 11 total touchdowns on his way to All-PSAC Conference honors. Showing those numbers from two positions demonstrated his talent, and got him the attention he needed to move forward in his pro career.

“I think being able to show that I was athletic enough to play multiple positions that year helped me get attention from pro scouts and teams,”  Palka said.

Obviously, the Division II stage is a lot less scouted than Division I. How does a player like Palka get from a Division II school like Gannon to a professional league?

“I loved playing Division II football because the skill level was great and people don’t give football at the smaller divisions enough respect in terms of the talents that come out of certain schools and leagues. I’m very blessed To have played D2 ball because it really put into perspective when I started playing pro football that the talent in that division is real,” Palka explained.

In the entire XFL, there were just 32 players from Division II and lower, which was a higher fraction than the NFL. Nevertheless, that still shows the talent that you need to have to succeed at the professional level.

His first shot with an NFL squad was with the Pittsburgh Steelers in rookie mini-camp. He put on a good showing but didn’t end up making the squad.

Next up, was north of the border in the Canadian Football League, where he signed with the Ottawa Redblacks. He did not end up playing in the regular season.

Afterward, Palka caught a break when he signed with the Columbus Destroyers of the now-defunct Arena Football League. He earned his first professional playing time going 4 for 5 on extra points, along with making two tackles.

“Each stop along the way I got to learn from great WR coaches to develop my skill set,” Palka said. “From the Steelers to Ottawa, to the Columbus Destroyers in the Arena league I just continued to learn and develop at WR. My biggest strides came in DC where I got to learn how to truly play WR from coach Pep, coach Bob Saunders, and teammates like Deandre Thompkins, Eli Rogers, & Malachi Dupre.”

Palka made his ‘biggest strides’ as a Defender, even though during the initial XFL draft Palka’s phone did not ring. However, during the supplemental draft, his phone did ring, and it was the DC Defenders calling.

Thank you for it all. @XFLDefenders @xfl2020 Thank you to the fans who embraced our team from the very beginning. There is nothing better than playing at @AudiField This league is off to a great start. Until next time.. DefendtheDMV pic.twitter.com/YopNT568o5

Palka made his presence known in a variety of ways at Audi Field, known as the DMV in the nation’s capital. He played some wide receiver and even threw the ball. He started in four of five games.

It seemed like DC had a great fanbase as we have recognized before. Defenders fans would come out ready to party, with the beer snake, and everything. The Defenders fans even were able to coax former commissioner Oliver Luck to add to the beer snake party. Arguably, DC had the best fan base and undeniably a top three fan base at the bare minimum.

When asked about his favorite XFL moment, Palka said, “My favorite moment of the XFL for me besides beating the Seattle Dragons in the opening XFL game was just developing great lifelong relationships with my teammates and becoming a family with many of those guys. The opening game was something special at Audi Field, packed excited stadium and our team played well, it was a great moment for all of us.”

The XFL and the DC Defenders were a perfect showcase for Palka to get some looks and gain some recognition as a great all-around athlete.

With all the restrictions and such, training has gotten hard for some, but that did stop Palka in his journey.

“To stay and shape and stay ready has been easy for me because I coach high school football in Saline Michigan, so all summer I would work out with players and stay sharp, as well as working out with players from the University of Michigan. really haven’t stopped working since our XFL season ended,” Palka said.

This a true player that you will not want to let slip off your radar. Palka could really help out any team he signs with, and help them in a variety of ways. He is a real threat to all defenses, he has a lot of similarities to a Julian Edelman, or Chris Hogan style of a football player. Palka plays with 110% and leaves it all on the field.