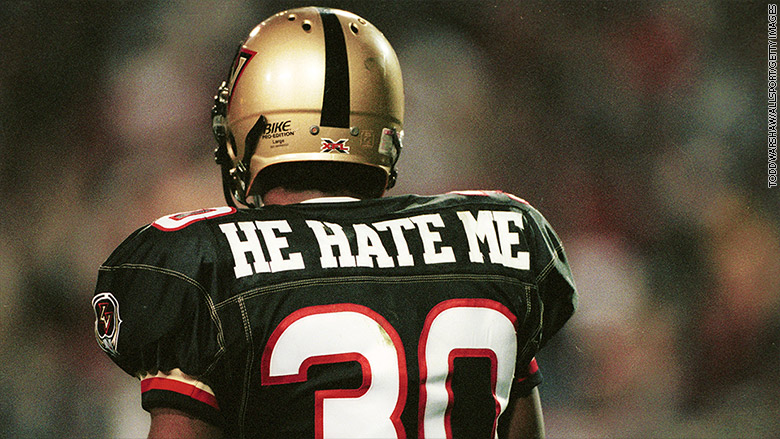 Catch 22: The XFL can’t survive as part of the WWF; The XFL would not have started without Vince McMahon’s vision.

There was supposed to be a second season. According the Vince McMahon, the founder of the fledgling league, the XFL was building a brand and it takes a while to make a mark in the sports world. The XFL was willing to do its time and build that brand.

The fans were satisfied. The XFL would survive. Everybody also knew that the league would get better with time.

This is why the sudden extinction of the league is a real shocker. Why, after all this, did the league fold so fast? Even the some of the league’s top employees were blind-sided by the news.

The XFL is a great business idea. The players are paid little, seats at the stadium are cheap and the whole product is designed to please the fans. Why couldn’t this business idea succeed?

Was Vince McMahon being insensitive to the league’s fans, players and employeees?

In the end Vince McMahon had no choice to fold the league. Once it was realized that UPN would not award a new TV contract for the coming season the end of the league had arrived.

The performance of the XFL was directly linked to the fortunes of the WWFE stock. When the XFL was announced the stock had immediately dipped thirty percent. Over the course of the league the stock price has remained low.

The WWF was saved.

Between the WWF and NBC $70 Million dollars was lost in the initial year of the league. Most of these losses were due to league start-up and were expected. It was all part of the business plan.

When you consider what the XFL accomplished in it’s first year, one might say that the new league was fairly successful. Attendance was above expectations. XFL branded clothing and memorabilia was selling well. The football product was getting better. The XFL was well on it’s way to making it’s mark as a spring football league.

If “Joe Nobody” had started up this league, using the backing of investors, then the league would have been left alone and would have been able to survive to build itself up into a viable football alternative.

The XFL is a great business idea. The players are paid little, seats at the stadium are cheap and the whole product is designed to please the fans. Why couldn’t this business idea succeed?

It’s a catch 22 situation. The XFL could not succeed because it was linked to the WWF and it’s founder Vince McMahon. But the XFL would not have been born if Vince McMahon had not had the vision to start such a football league.

Is there another businessman out there that is willing to invest in this league? Why not? They should be running and not walking to the doorstep of the Vince McMahon to buy the XFL at a fire sale price.

Vince McMahon and the WWF have done all the hard work already. The brand is built. The franchises are in place. The players are available, and will play for next to nothing. And despite what the TV ratings will have you believe the fans in most of the XFL cities are waiting for more XFL football.

And more XFL fans will be born, once the perception of WWF “taint” is taken away and real football fans start accepting the league for what it really was… a very good minor football league with excellent innovative ideas and a solid business plan.

So step up and buy this league. Once ownership changes, and Vince McMahon and the WWF are cut loose, the apparent “taint” that the media has assigned to this league will be gone and an excellent football league will emerge.